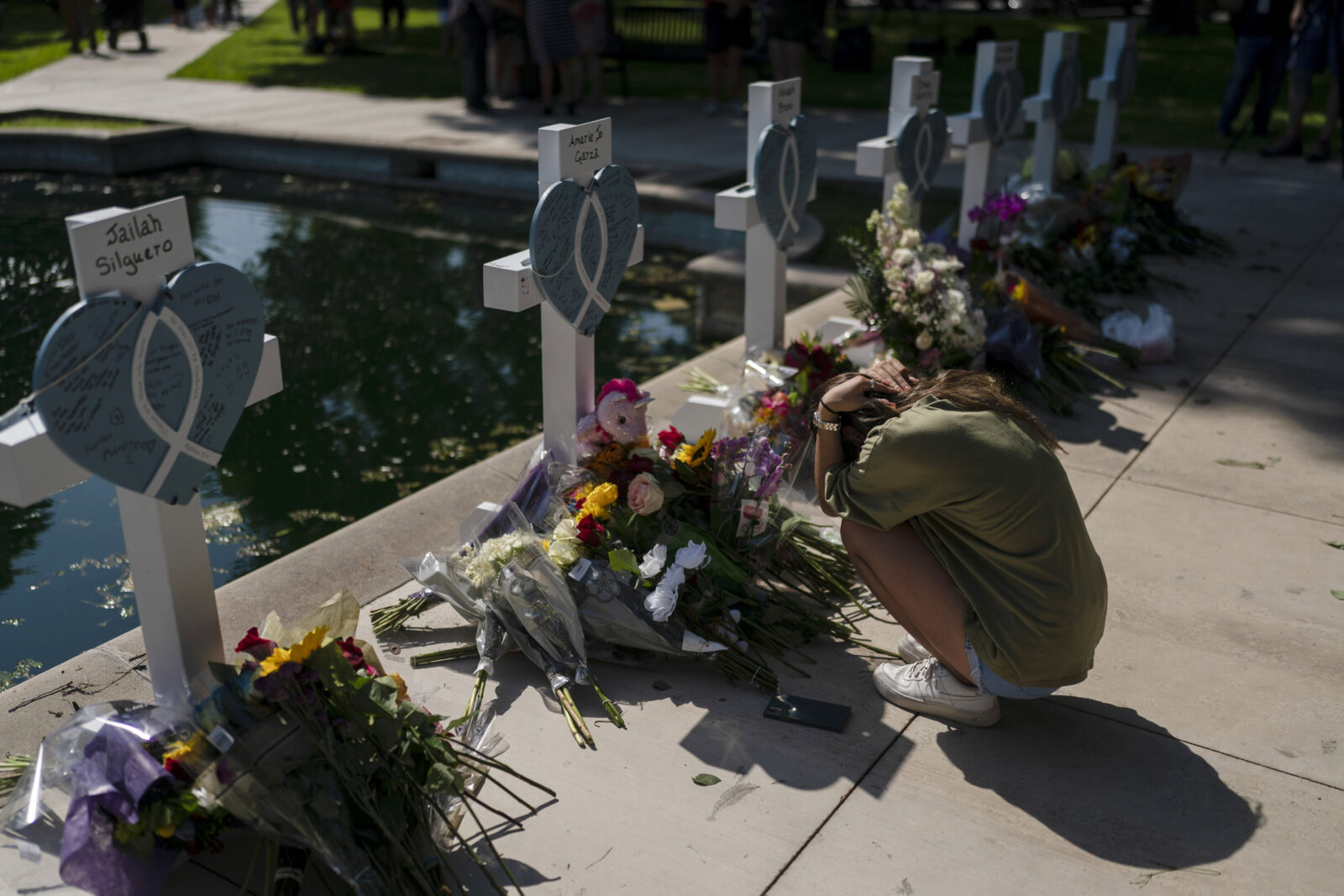 Elena Mendoza, 18, grieves in front of a cross honoring her cousin, Amerie Jo Garza, one of the victims killed in this week's elementary school shooting in Uvalde, Texas, Thursday, May 26, 2022. (AP Photo/Jae C. Hong)

The last conflict I covered was in Iraq a few years back.

I was in Mosul with the Iraqi Special Forces, the tip of the spear in a brutal, destructive fight to retake the besieged city from the tyrannical, and exceptionally cruel, Islamic State.

During a day of particular heavy shelling and gunfire, I saw a little girl carrying a baby boy in her arms.

Her face streaked with blood and panic, the girl struggled to keep pace with a group of adults fleeing the violence. As she ran, the toddler in her arms remained slack, his head rolling from one side to another as if he was in a deep sleep.

Only the little boy wasn’t sleeping — he was dead.

In that moment, I experienced the kind of heart-crushing grief I had not previously felt on the battlefield, an experience I’ve since attributed to being the first time I was reporting from the frontlines since becoming a father.

The sight of that dead boy — about the same age as my little girl back home — made me cry, something I’d never done mid-conflict.

Those haunting recollections got me thinking about other kinds of reporting I could do, prompting my decision to return to America and start Postindustrial, hoping the change would help me sleep better and keep me out of harm’s way.

Skip ahead several years following Postindustrial’s founding in 2018, and I’m haunted anew by the violence at home. Spaces we as Americans like to think of as “safe” were shattered by mass killings thousands of miles away in Buffalo and Uvalde, less than two weeks apart. These spaces will never again be the same.

The shooters — however different — were both radicalized. And in the U.S. there have been more than 200 mass shootings so far this year. There’s been more of these incidents — something that should alarm all of us. 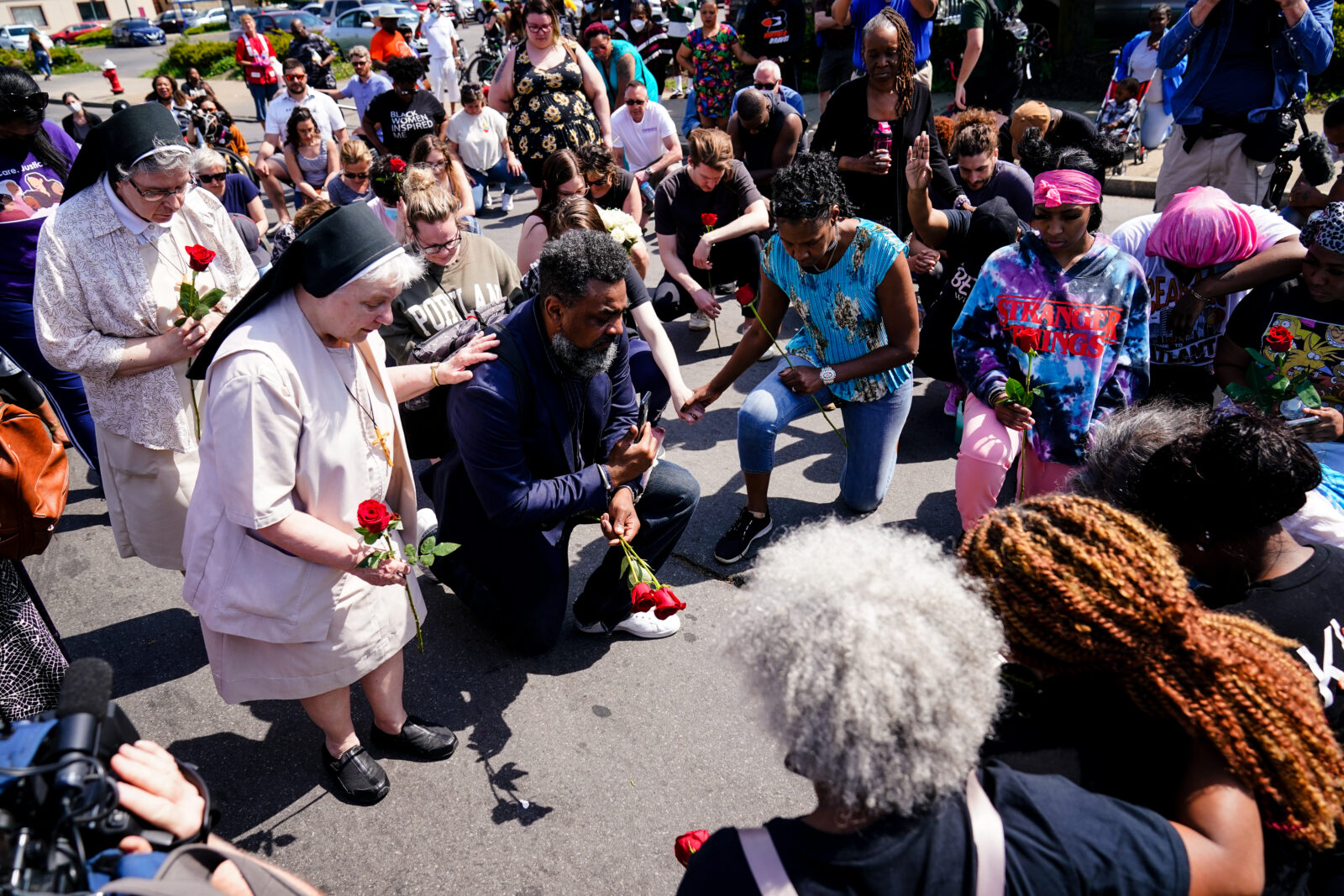 People pray outside the scene of a shooting at a supermarket in Buffalo, N.Y., Sunday, May 15, 2022. (AP Photo/Matt Rourke)

Among the worst I’ve covered was the deadly synagogue massacre in Pittsburgh, the worst attack on the nation’s Jewish community in American history. That day, I interviewed those who lost loved ones, and surveyed a scene that reminded me of the mosque attacks and school bombings I’d reported on aboard.

Since then, Postindustrial has written about acts of gun violence including the school shooting in Michigan late last year that prompted me to write this screed about my loathing of all guns.

Care to guess how Gun-Obsessed Americans reacted to that one?

Alas, it seems my efforts to get away from covering war were for naught. Because from where I stand today, America sure looks like it is at war with itself.

Only here, the casualties aren’t soldiers and civilians in a remote village on the other side of the world. In America, it’s kids who are being killed, and the frontline is their classrooms, Gunfire now kills more children in America than any other cause.  School shootings number more than two dozen so far this year.

With some lawmakers’ refusal to support commonsense gun control, it feels an awful lot to me like I’m covering a war in which one side is willing to sacrifice the lives of innocents to maintain their extremist grip on power.

Only this time it’s not a terror group on the other side of the world — it’s homegrown extremists wielding weapons intended for the battlefield to kill children who are now also my daughter’s age. Or people shopping at the grocery store.

I find myself experiencing the same horrors and overwhelming grief today as I did all those years ago in Mosul.

To me, it feels like America stands at a razor-thin preamble to a full-fledged conflict with itself. Call it civil war, or a low-level insurrection. Either way, the pall of war is upon us.

Think I’m exaggerating?. Way back in April 2020, I wrote this column about how I was afraid for America’s future after armed protesters in Michigan stormed the capitol building in protest against COVID-19 restrictions while threatening the governor.

The outcry against my concern by some readers was alarming. Many trotted out the “enemy of the people” trope with a healthy side of profanity. Others wished me dead, saying it was “too bad” I hadn’t died years earlier from my injury in Afghanistan.

Such rhetoric during Michigan-only, armed outrage seems like child’s play following the Jan. 6 coup attempt, and myriad mass shootings, most recently the two carried out within just days of another by two 18-year-old men who recently purchased assault rifles reminiscent of the ones I’d seen tear flesh and bone in Iraq, Afghanistan, and elsewhere.

I’ve seen war up close. Scenes like the one in Uvalde, Texas, a supermarket in Buffalo, and the many other mass shootings that have become common in America, is what war looks like.

Postindustrial founder and editor-at-large Carmen Gentile has worked for some of the world’s leading publications and news outlets including The New York Times, USA Today, CBS News and others. His book, “Blindsided by the Taliban,” documents his life as a war reporter and the aftermath of his brush with death after being shot with a rocket-propelled grenade in Afghanistan. Reach him at carmen@postindustrial.com.