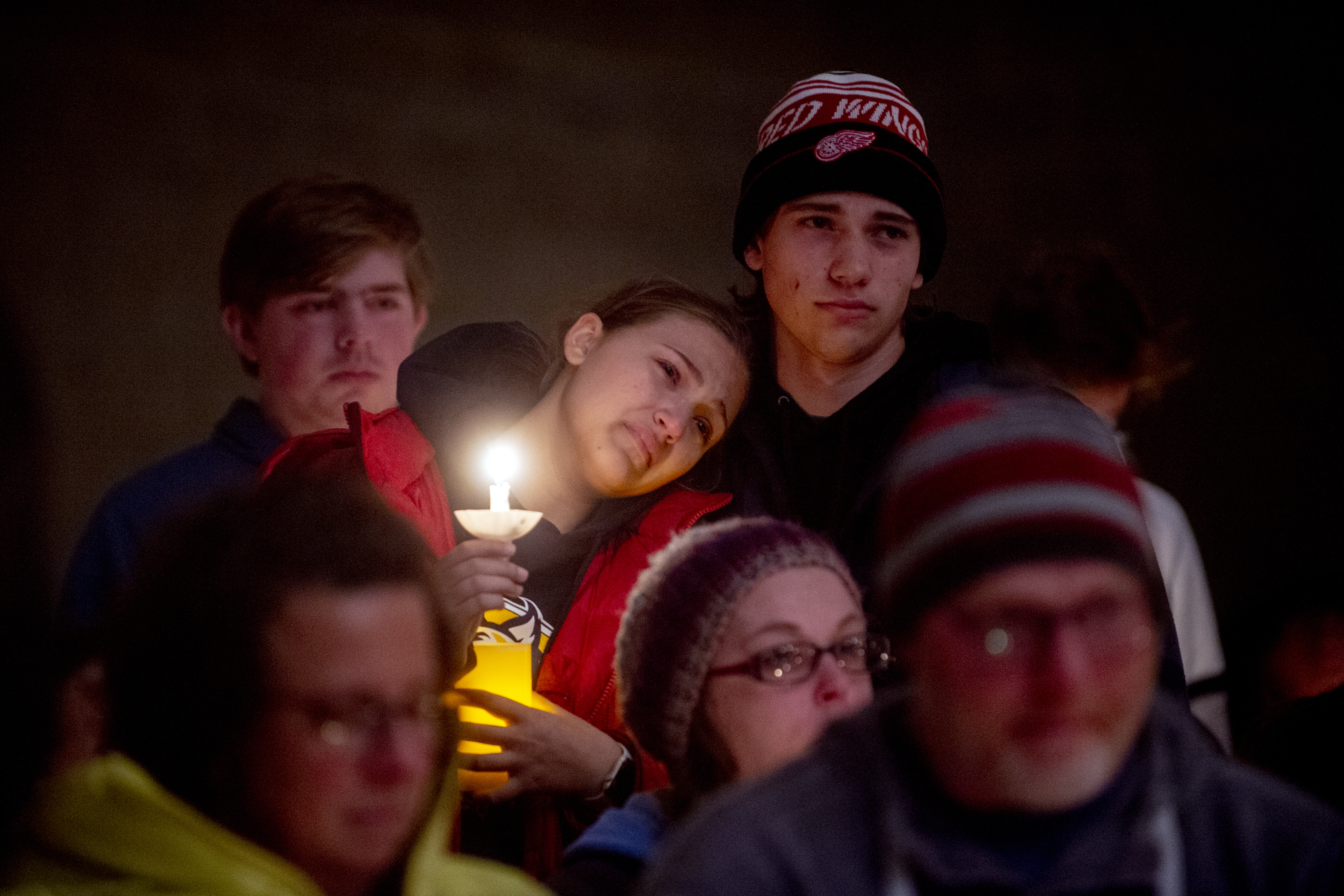 Allison Hepp, 15, holds a candle while leaning against her brother Benjamin Hepp, 17, as the two stand alongside their classmates during a prayer vigil after the Oxford High School school shootings, Tuesday, Nov. 30, 2021, at LakePoint Community Church in Oxford, Mich. (Jake May/The Flint Journal via AP)

I’ve hiked mountainous battlefields in rural Afghanistan and through labyrinthine streets in Baghdad.

Each came with its fair share of potentially deadly, and heavily armed, perils.

You know going into those places you might die there. At least, you better.

That said, you couldn’t pay me enough money to risk my life, day after day, to work in American mass shooters’ soft-target of choice: schools.

The Michigan school shooting that left four children dead and many more wounded was committed by a troubled 15-year-old boy, whose parents were told by school officials earlier that day that their son was exhibiting alarming behavior, just hours before he opened fire on his fellow students.

Those same piece-of-shit parents, who bought him a his murder weapon — a semiautomatic 9-millimeter Sig Sauer handgun — declined to heed school officials’ warnings and now face involuntary manslaughter charges for aiding in their son’s murderous rampage.

How are we just OK with all of this?

Deadly school shootings have become so common in America that we hardly have enough time to digest what happened at one school massacre before the next tragedy unfolds. And many of them feature the same weapon that has no business being in the hands of anyone but professionally trained soldiers serving their country.

It’s gotten to the point where we’re numb to the death of children. Those of you old enough will remember how the 1999 Columbine shooting seemed to rock the American psyche for months on end, prompting deep examinations of the two, troubled teen boys who used weapons of war to exact their revenge.

Now? There’s not time for that kind of analysis of school shooters. It’s simply “another troubled teen boy (it’s always boys) who’s run amok with their parents’ arsenal,” then onto the next one. When a society stops caring about its youth, it’s a sign that the rot has reached the core and must be excised.

This has to stop. We all know this. We can’t continue sending out children and educators to slaughter.

There’s really only one solution:

Get rid of all the guns.

There, I said it.

And I mean all of them. No AR-15s, no handguns, no shotguns, no nothing. Americans clearly can’t handle their guns.

You say gun rights are written in the Constitution?

I say the Constitution, like any aged text, needs to be reexamined in the context of modern times. It is not a holy script delivered from on high. It was written by men, which by their nature were flawed and incapable of predicting how the Second Amendment might be mutilated by gun nuts more than two centuries later.

You really think that our Founding Fathers could predict the quickness and lethality of modern-day weaponry when putting gun rights in there?

“But what about hunting?” some of you might ask. Fair question. Here’s my answer: You wanna hunt? Do it with a bow and arrow. Set a snare. Hide in the bush covered in deer urine, lie in wait, then pounce on a 12-point buck and wrestle it to the ground before dealing it a final death blow with your bare hands I bet those venison steaks will taste better than any you’ve bagged from a tree stand a 100 yards away.

I know the gun nuts are going to come after me. I’m fine with that. Spew your vitriol. Here’s my email: carmen@postindustrial.com. I’ll gladly publish your opinions, along with your name.

I’m easy to find. Come get me. Seeing as how I’m clearly not armed and easy to spot, you could pick me off with one of your high-powered, long-range penis substitutes, no problem. Show the world how you “owned the lib” who covered war and saw carnage firsthand in faraway places and is tired of seeing that same mayhem play out in America.

However a real man (It’s a safe bet my would-be assailant will be a man) would walk up to me empty-handed and make your case for why this American carnage should continue unchecked.

I’ll argue that point up and down and embarrass you while doing it. Because unlike you, I am heavily armed with my weapons of choice: facts, logic, and care for our children.

You don’t stand a chance against me and my arsenal.

Carmen Gentile is the founder of Postindustrial Media and the author of Blindsided by the Taliban: a chronicle of his unusual injury in Afghanistan and eventual return to frontline reporting.