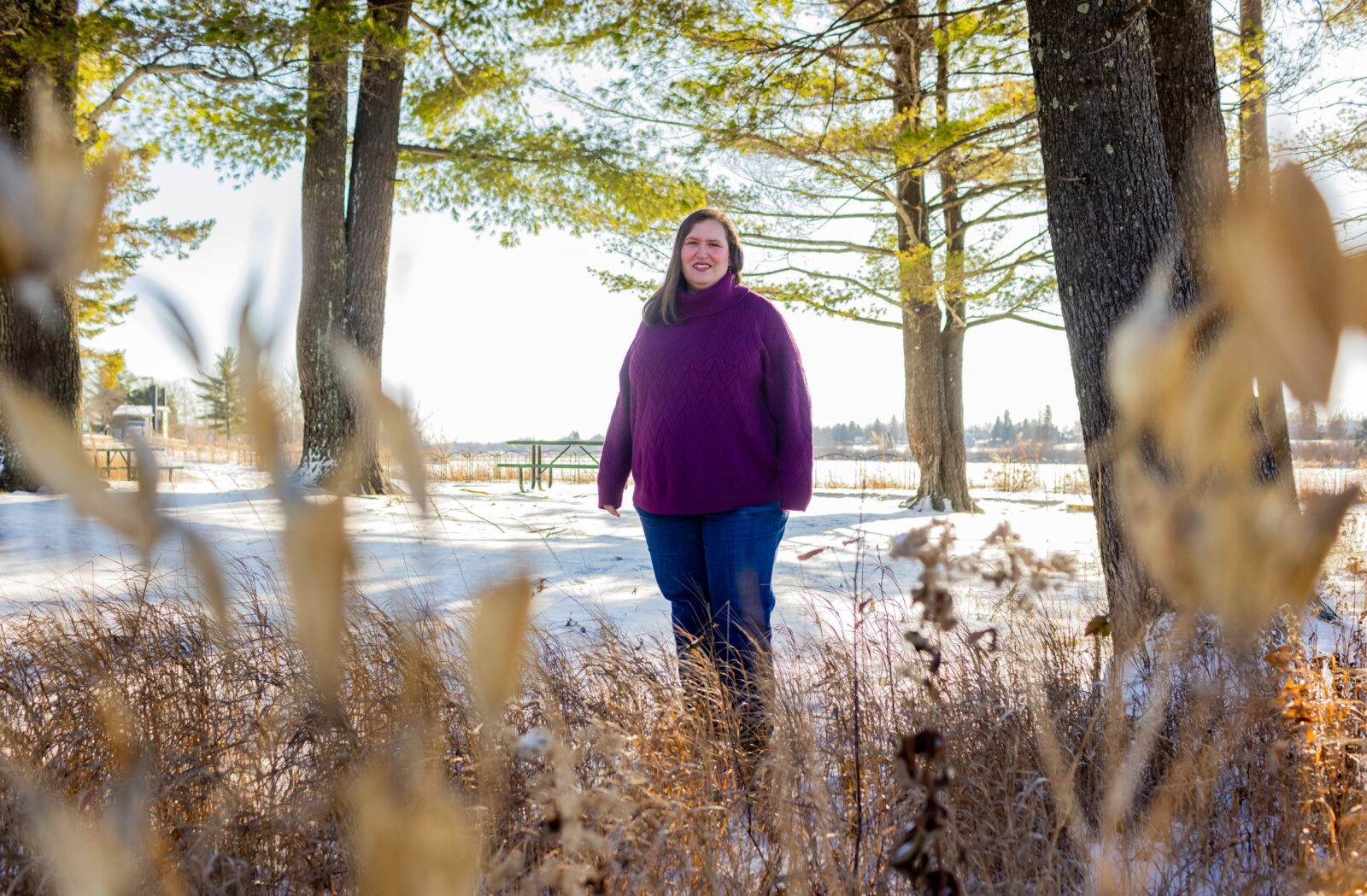 Chrissy Barnard is photographed in Superior, Wis., on Dec. 8, 2022. Barnard is a peer support specialist with the National Alliance on Mental Illness Wisconsin. She's among many voices calling on lawmakers to overhaul a gap-riddled emergency mental health system that she said poorly served her and many others during crises. // Derek Montgomery for Wisconsin Watch

Wisconsin Watch is a nonprofit and nonpartisan newsroom. Subscribe to our newsletter to get our investigative stories and Friday news roundup.

When Chrissy Barnard faced a mental health crisis and most needed care, law enforcement  handcuffed her, placed her in the back of a patrol car and drove her five hours to Wisconsin’s only state-run mental health facility for the general public.

Barnard remembers the patrol car’s cold seats. She would eventually have her shoes confiscated, presumably so she couldn’t hang herself with the laces.

The 330 miles between Barnard’s hometown of Superior, Wisconsin and Winnebago Mental Health Institute near Oshkosh made it difficult for her loved ones to comfort her in person.

Barnard — who was diagnosed with bipolar disorder, anxiety, post-traumatic stress disorder and borderline personality disorder — stayed there for months and saw her family just three times, she says.

About 15 years later, after getting the help she needed, Barnard is now a peer support specialist with the National Alliance on Mental Illness (NAMI) Wisconsin. She’s among many calling on lawmakers to overhaul an emergency mental health system that she says poorly served her and many others.

Mental health crisis services in Wisconsin operate on a county-by-county basis, yielding wide disparities in care. With few exceptions, counties lean heavily on law enforcement to detain people during mental health emergencies — in which a person is considered a threat to themselves or others — and transport patients to receive care.

The nearest treatment facility might be hundreds of miles away for some rural residents.

Aside from the Winnebago County institute, the state runs only one other mental health facility: Mendota Mental Health Institute in Madison, which primarily serves people involved in the criminal justice system.

“The whole system needs to change, because it’s so traumatizing. You’re treated like a criminal from the get-go,” says Barnard, who earlier in her life was hospitalized for mental health challenges in Wisconsin and Minnesota more than 30 times.

She has company in pushing for change, including other advocates, mental health practitioners and law enforcement officials. Citing examples in neighboring states, the coalition calls for Wisconsin to build new regional mental health facilities, add care options outside of lengthy hospital stays and fund teams of mental health experts to respond during emergencies — lifting such burdens from law enforcement.

“The system we currently have right now for emergency detention in Wisconsin is broken,” says Wisconsin Attorney General Josh Kaul, a Democrat who in 2019 convened a summit focused on solutions. “And we need to find alternatives.”

In his 2021-2023 biennial budget, Democratic Gov. Tony Evers proposed more than $17 million for such an overhaul, but the Republican-led Legislature rejected the proposal among hundreds of others from Evers. Republican lawmakers have expressed support for regionalizing mental health crisis services, but $10 million allocated for doing so remain tied up in bureaucracy.

“In that way, you can spread out the care,” says Thrasher, who advocates for a regional approach in Wisconsin that would include making sure that each region has a psychiatric hospital and other services.

“Instead of doing this with 72 different counties, turn us into four or five regions where the counties can work together,” he says. 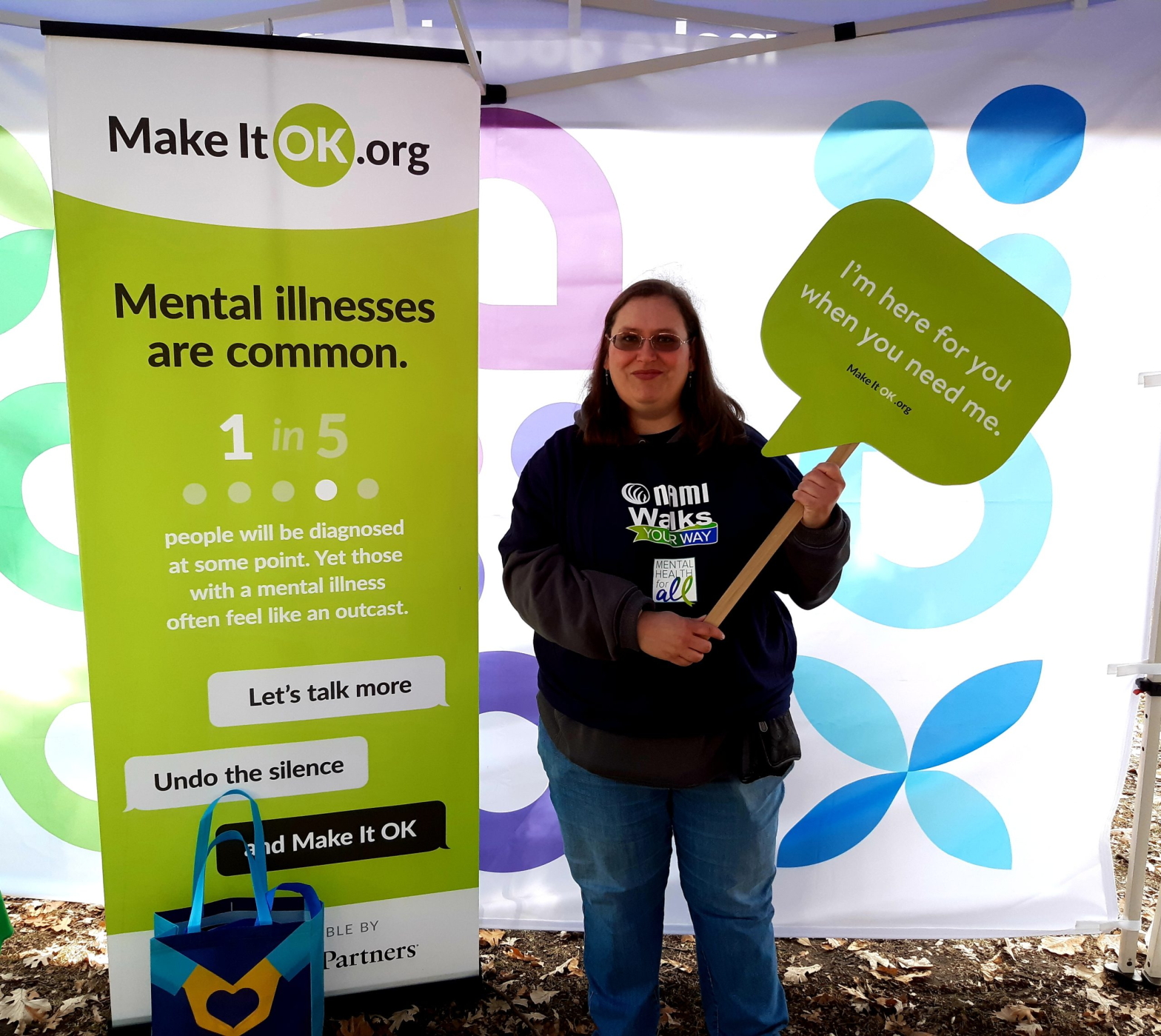 Chrissy Barnard is a peer support specialist with the National Alliance on Mental Illness Wisconsin. Before her recovery, she was hospitalized for mental health-related issues more than 30 times in Wisconsin and Minnesota. “The whole system needs to change, because it’s so traumatizing. You’re treated like a criminal from the get-go, she says of Wisconsin’s disparate county-by-county system for delivering crisis care. “For someone who has no history of violence, or a criminal record or anything, it’s totally humiliating.”

That is the case in Barnard’s home county of Douglas, necessitating her journey to Winnebago County. It’s even more complicated these days for some Douglas County patients, since they live near the Minnesota border, Barnard says; they might end up in hospitals in Rochester, Minnesota or Fargo, North Dakota and later struggle to find transportation home.

In Minnesota, higher-population counties typically operate their own emergency mental health services, while rural counties often pool their resources to offer regional care, according to the Minnesota Department of Health Services.

Officers seem to agree. Most respondents to a 2019 Wisconsin Department of Justice survey of police chiefs and sheriffs said that mental health interventions requiring detention ate up too much time. Of 354 respondents, 96% said that additional mental health facilities and transportation options outside of law enforcement would likely improve the process. 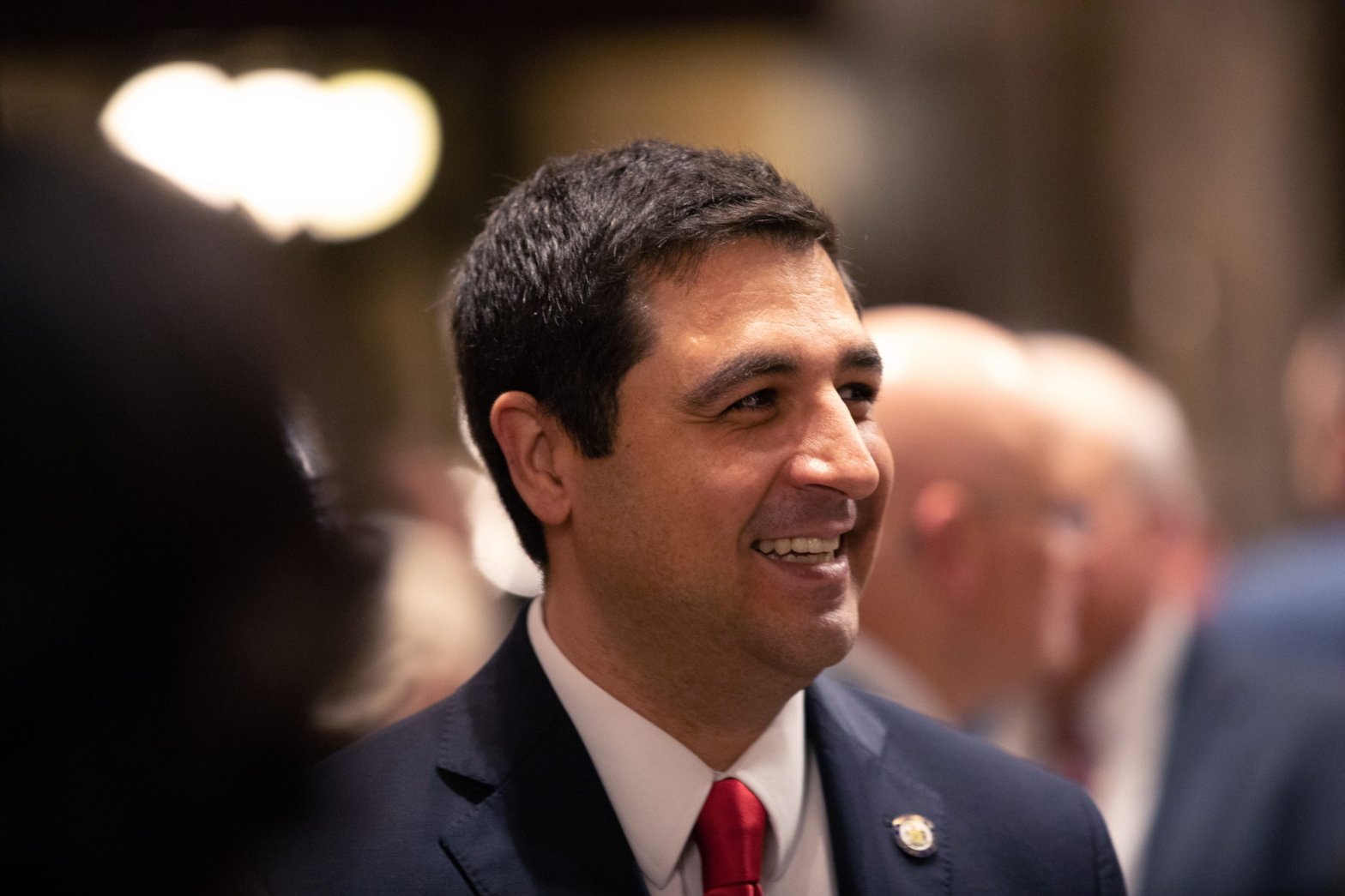 “The system we currently have right now for emergency detention in Wisconsin is broken,” says Wisconsin Attorney General Josh Kaul, a Democrat who in 2019 convened a summit focused on solutions. “And we need to find alternatives.” Kaul is seen here at the State Capitol in Madison, Wis. on Jan. 22, 2019. // Emily Hamer / Wisconsin Watch

Some of Wisconsin’s more populous communities, including Madison and Milwaukee, are shifting such duties to trained civilians.

Madison’s Community Alternative Response Emergency Services (CARES) program responded to 935 calls in its first year of operation and resolved most situations on scene, according to a report released in November 2022. CARES provided in-person help and transportation in  31% of instances, and just 3% of calls required police transfers.

In search of short-term options

And for patients who require care following a crisis? They need options outside of Winnebago County, overhaul advocates say.

Across much of Wisconsin, law enforcement and others who respond to mental health crises face a binary choice between emergency detention or no intervention at all, says Kaul. But investing in short-term inpatient facilities, psychiatric emergency rooms and receiving centers could give responders useful middle ground.

In Madison, that includes University Hospital’s 20-bed psychiatric inpatient wing where patients who may not require a longer hold can receive care for just a few days.

“A lot of people in crisis can turn around and feel markedly better in 24 to 48 hours, it does not require a lengthy inpatient stay,” Thrasher says.

In his last budget, Evers proposed funding a variety of services that mental health advocates and law enforcement representatives support. He sought $12.3 million over two years to build up to two regional crisis centers — each with crisis urgent care capabilities, a temporary observation center, a 15-bed stabilization facility and at least two inpatient psychiatric beds. 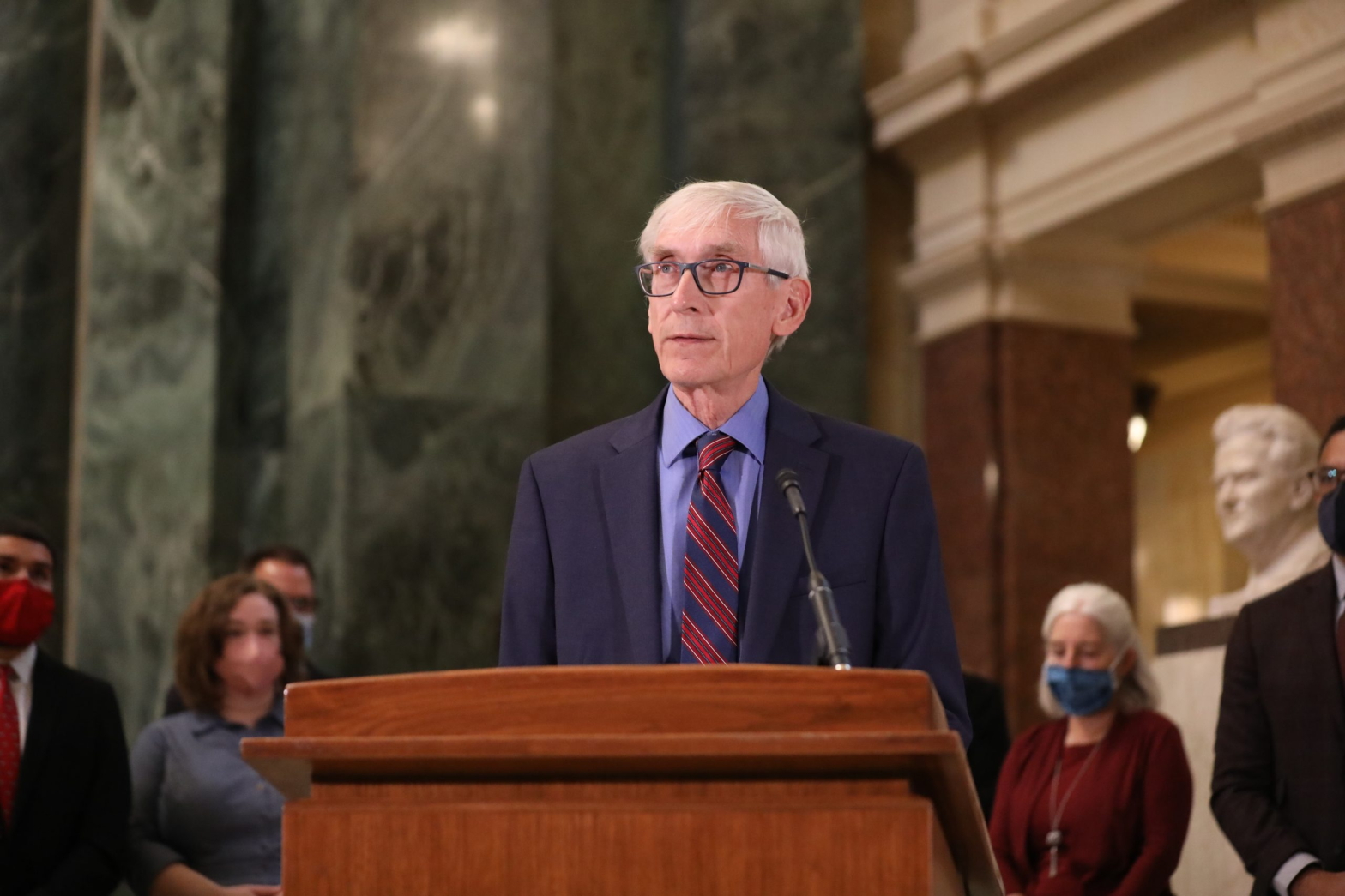 Gov. Tony Evers speaks at a press conference in the Wisconsin State Capitol, in Madison, Wis., on Nov. 2, 2021. In his 2021-2023 biennial budget, Evers, a Democrat, proposed allocating millions of dollars to build regional mental health crisis facilities, but the Republican-led Legislature rejected the proposal among hundreds of others from Evers. The Legislature later approved $10 million for “regional crisis services or facilities,” but the powerful Joint Finance Committee has not granted the Department of Health Services a meeting to free up those funds, according to Evers’ office. // Coburn Dukehart / Wisconsin Watch

Republicans leading the Joint Finance Committee stripped each proposal from the budget that Evers ultimately signed.

The committee did include $10 million for “regional crisis services or facilities” in its supplemental budget, but those funds have yet to be released. State law requires agencies designated to receive such funds to request their release and justify the need. In this case, that’s the Department of Health Services.

The department has twice requested meetings with the joint committee for this purpose, once in January and more recently in December. The committee has yet to hold a meeting, an Evers spokesperson told Wisconsin Watch on Dec. 19.

“We have, instead, resorted to requesting information on uses of the funds from stakeholder groups because your agency is unwilling to provide basic information,” says the letter, signed by Marklein and his co-chair Sen. Mark Born, R-Beaver Dam.

“Our goal is to ensure the $10 million dollars is used in the most effective way possible so as to have the largest overall impact,” the letter adds.

The Joint Finance Committee supports a regional mental health crisis model that would include crisis urgent care and observation centers, the letter says, adding that committee staff would reach out to DHS to set up a meeting.

Outside of the budgeting dispute, the Evers administration sought to help counties by requesting federal reimbursement for counties that transport Medicaid recipients during emergency detention. But the Centers for Medicare and Medicaid Services denied the request, saying it would violate the Social Security Act, Evers’ spokesperson says.

Evers plans to unveil his next budget on Feb. 15, following a set of public listening sessions.

“Gov. Evers remains committed to improving our crisis response system, but we don’t have to wait until the next biennial budget passes to do so,” Evers’ office tells Wisconsin Watch. “There are $10 million of taxpayer money sitting idly in an appropriation controlled by Republicans on the Joint Finance Committee, and it’s time for them to release those funds.”

As she looks back upon the dark chapter that her mental health struggles dominated, Barnard feels grateful for her progress and stability.

“I ended up losing my house and my job and my fiancé and all kinds of things,” Barnard recalls. “I lost basically everything, my pets, everything.” 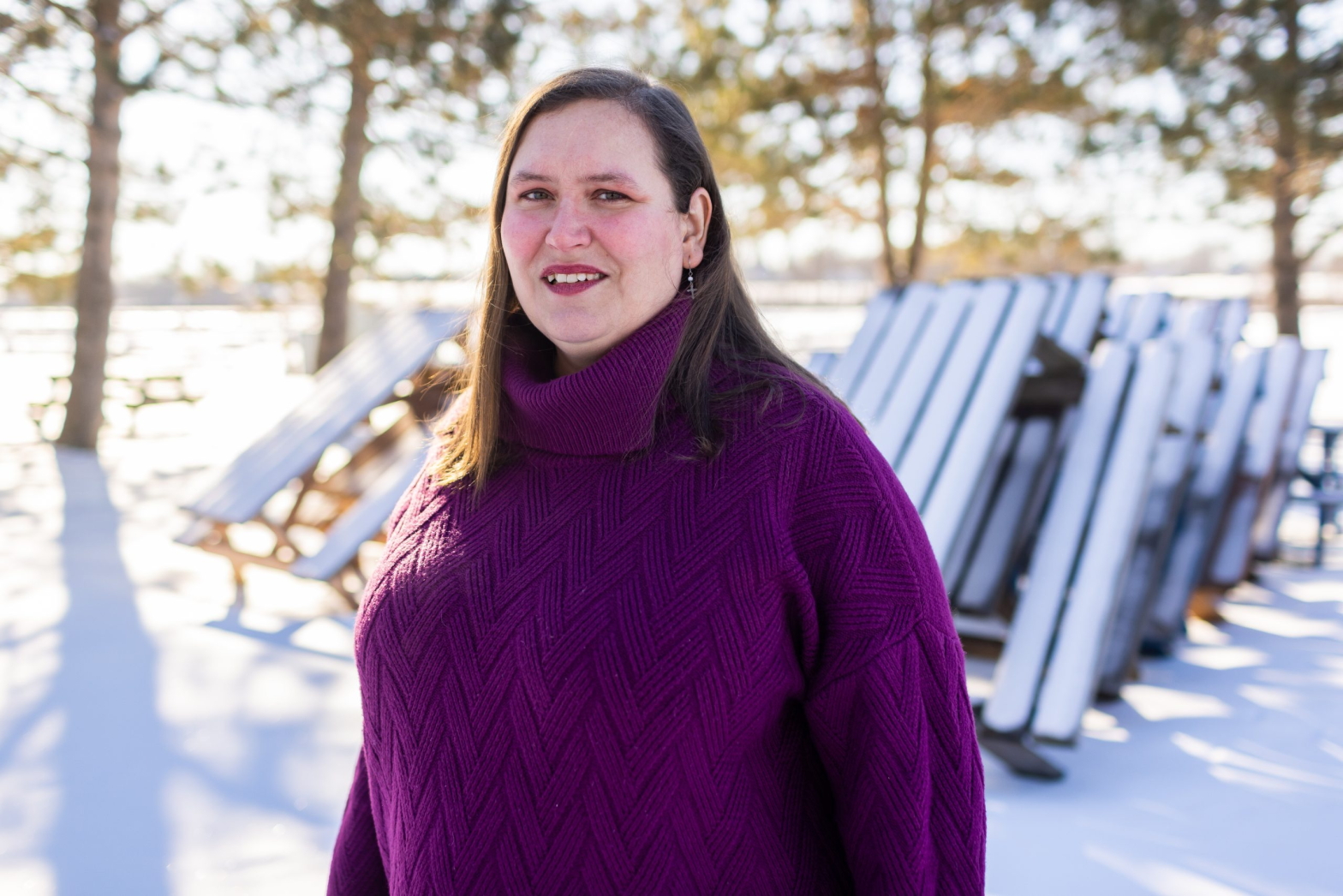 Chrissy Barnard is photographed in Superior, Wis., on Dec. 8, 2022. Barnard is a peer support specialist with the National Alliance on Mental Illness Wisconsin. She’s among many voices calling on lawmakers to overhaul a gap-riddled emergency mental health system that she said poorly served her and many others during crises. // Derek Montgomery for Wisconsin Watch

Barnard now owns her own home in Superior, where she lives with two cats and a dog. She has spent 12 years working for Essentia Health, an integrated health organization serving patients in Minnesota, Wisconsin, and North Dakota. Her recovery made that tenure possible.

Barnard now sits on the board of directors for NAMI Wisconsin, which in 2019 named her  “Peer of the Year,” and she serves on a variety of councils, task forces and peer support groups related to mental health and recovery.

“I like to advocate for mental illness recovery wherever I go,” she says. “Because I know from personal experience that recovery is possible.”

If you or someone you know is struggling or in crisis, help is available 24/7. Call or text 988 to reach the 988 Suicide & Crisis Lifeline, or use the chat feature at 988lifeline.org.

Erin McGroarty joined Wisconsin Watch as an investigative reporting intern in June 2022. She is pursuing a Master’s degree in journalism at UW Madison, specializing in reporting on criminal justice and mass incarceration.

The nonprofit Wisconsin Watch (www.WisconsinWatch.org) collaborates with WPR, PBS Wisconsin, Milwaukee Neighborhood News Service, other news media and the University of Wisconsin-Madison School of Journalism and Mass Communication. All works created, published, posted or disseminated by Wisconsin Watch do not necessarily reflect the views or opinions of UW-Madison or any of its affiliates.