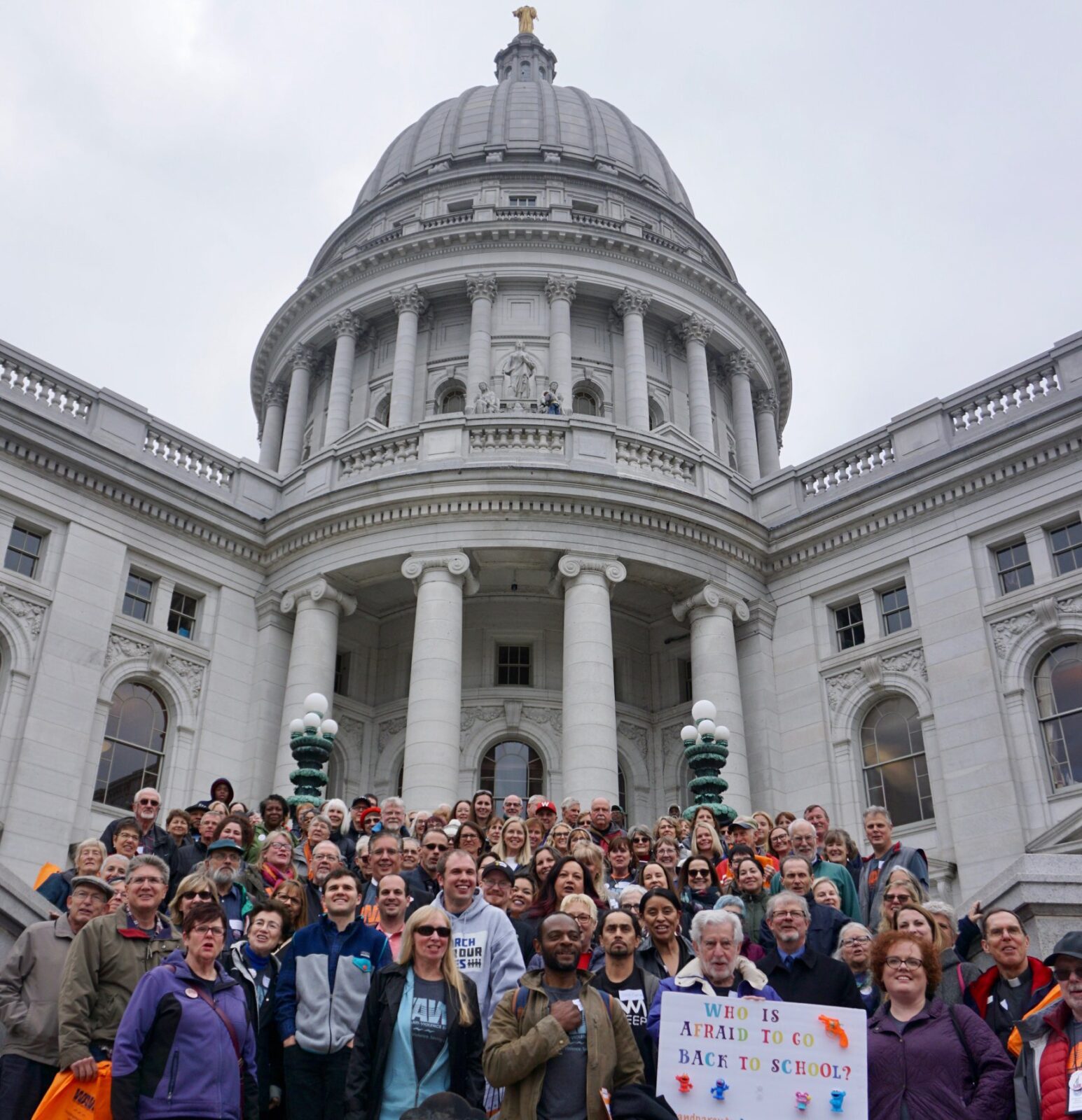 Jeri Bonavia was an unlikely candidate to become a leading advocate for gun control. But her 5-year-old daughter changed her life.

“So many kids are being killed with guns,” young Jenna told her mother. “Fix it, Mommy.”

“I wasn’t an activist, wasn’t political. I’m an introvert. It wasn’t a natural fit,” says Bonavia, the mother of three, who grew up in a gun-loving Milwaukee home with a father who was a lifelong member of the National Rifle Association (NRA). “I didn’t have any negative feelings about guns. But I couldn’t set aside what she had said.”

Prompted by her daughter, Bonavia began to research the issue in 1993, working with a Peace Action committee supporting a Milwaukee referendum to ban handguns, which failed. When the gun issue began to overwhelm Peace Action’s other agenda, WAVE became a separate organization. Bonavia, a former X-ray technician who was beginning to have some success as a playwright, became WAVE’s executive director.

She said she was “naïve enough” at the start to think you could just do the research, put the facts together, present them to public officials and effect change, while being respectful of Wisconsin’s gun culture. She has learned that is not how it works, as even common-sense policies supported by 80% or more of Wisconsin citizens die in the state Legislature without even a hearing or debate.

Her role makes her a prime target for insults, harassment, intimidation and even violent threats from pro-gun activists, delivered online, by telephone, email, letter and, in one memorable case, face-to-face.

She was canvassing door-to-door to collect signatures when a man told her, “You’re the kind of person who should be shot, execution style, and I have the guns to do it.”

“I don’t dwell on threats, that’s for sure,” she says. “I try to focus on what we’re doing, the good we can do and keep all my thoughts over in that lane.” But WAVE takes precautions. Its address is a post office box and it doesn’t share the location of the office with the public. The website does not list names or photos of the seven staff members and lists only a general phone number and email. But the staff are often front and center at public events.

"The hardest thing for me is seeing how much devastation gun violence has brought to the people of our state and watching the Legislature react with this callousness and indifference." — Jeri Bonavia, executive director of the Wisconsin Anti-Violence Effort

“We have created a really strong infrastructure, even if we can’t accomplish all we want to, that we can carry forward to the next generation of leaders,” Bonavia said. WAVE has 80,000 supporters spread among all of Wisconsin’s 72 counties and in all 99 State Assembly districts.

WAVE-supported priority bills for universal background checks, domestic violence prevention and a “red flag” law to allow family members to petition a judge to temporarily remove guns from people at high risk of committing violence were introduced this session. But all died in the Republican-controlled Legislature. “The hardest thing for me,” Bonavia says, “is seeing how much devastation gun violence has brought to the people of our state and watching the Legislature react with this callousness and indifference.” But there are positive, if less visible, accomplishments. “We are working hard with partner organizations and communities to make sure they have what they need to do important violence prevention programs in their communities. We were able to get the governor to commit $25 million to violence prevention efforts and $20 million to support victim services. We are looking at the intersection between gun violence and systemic racism,” she says.

After almost 30 years of trying to push the huge boulder of gun control up the mountain of resistance, how does she keep doing it every day? “I am a fan of Sisyphus and recognize the similarities,” she says, but she stays motivated. She is not the only long-time WAVE advocate. Two of the original 1994 board members are still involved, one as a staff member and the other as a returning board member.

Bonavia remains optimistic about the long term. “I have always believed that we will take steps to end gun violence in our country, but we are in for some very rough waters until we get to the other shore,” she said. “History tells us the pendulum swings back strongly. We are not there yet because guns are so deeply embedded in our culture wars. That will have to hit a tipping point, too. The NRA is not the beast it once was. If guns were a stand-alone issue, now is when we might see real change. But it is so deeply ingrained with the other culture war fights it will take a little bit longer. It is outrageous, but while we wait there will be more mass shootings.”

Bonavia says she knows that WAVE has made a difference. “It is difficult to pass the important life-saving policies, but we have been able to stop some of the most radical pieces of the gun lobby agenda,” she says. Several years ago, when she was visiting the state Capitol to speak with legislators, she recalls, “The NRA lobbyist said to me, ‘Because of WAVE, Wisconsin is the only gun-friendly state where the NRA can’t get everything the NRA wants.’ He said it in an accusatory way, but I took it as one of the greatest compliments I’ve ever had.”

Bill Christofferson is a former journalist and political consultant, and current peace activist, who lives in Milwaukee. (He is a former WAVE board member.)

The Wisconsin Examiner is a nonpartisan, nonprofit news site offering a fresh perspective on politics and policy. As the largest news bureau covering state government in Madison, the Examiner offers investigative reporting and daily coverage dedicated to the public interest. We take our inspiration from the motto emblazoned on a ceiling in our state Capitol: “The Will of the People Is the Law of the Land.”