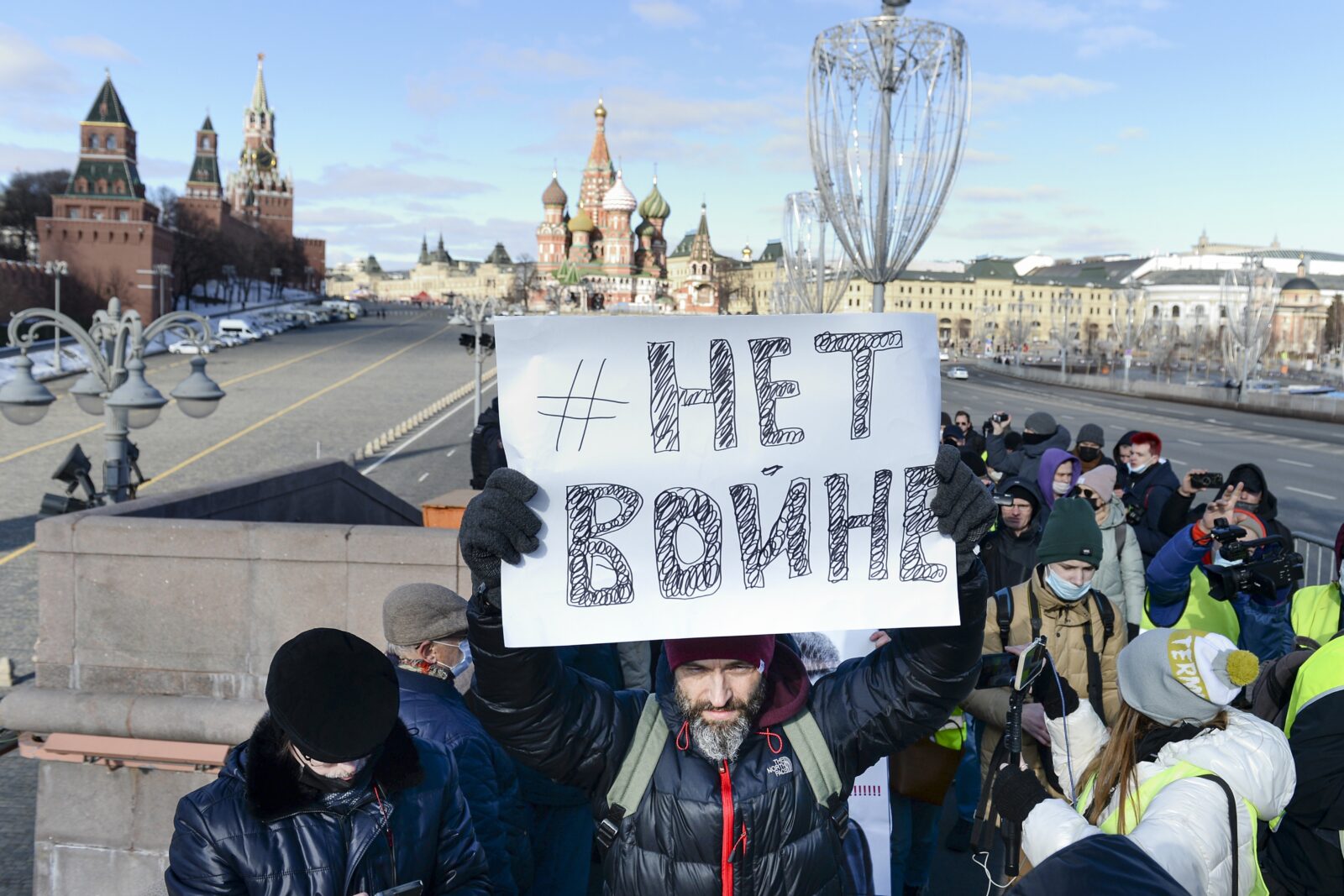 A man holds a poster which reads "No war" as people lay flowers near the place where Russian opposition leader and Putin critic Boris Nemtsov was gunned down in 2015, with the Kremlin Wall, left, the Spaskaya Tower, second left, and St. Basil's, center, in the background in Moscow, Russia, Sunday, Feb. 27, 2022. (AP Photo/Denis Kaminev)

In the small, one-time bustling factory town where I grew up, there is an old Ukrainian social club that’s long been shuttered, and a church that was nearly destroyed in a recent fire.

These former Ukrainian community mainstays are remnants of an earlier time in America, when various immigrant groups, mostly from Europe, many of whom labored in steel mills and coal mines, gathered in towns like mine to celebrate their culture, traditions, and faith.

Ukrainian-Americans were particularly grateful for the opportunity to freely socialize and worship with their countrymen, considering the hardships they fled back home. You see, in the 1930s, thousands of Ukrainian immigrants settled in Postindustrial America following the Soviet Union’s orchestrated starvation of the Ukrainian people, a genocide that left millions dead.

They came to America for the same reason so many are fleeing now: to escape cruel and deadly aggression at the hands of a tyrannical leader in Moscow.

Today, there are more than 1 million Ukrainian-Americans, many of whom feel a mix of resurgent ancestral pride, coupled with anger and pain, while watching Russian forces invade their ancestral homeland without provocation, a chilling echo of what their forebearers endured.

Still, some folks are seemingly on the fence about whether America should aid Ukraine, while others are openly cheerleading Vladimir Putin’s attempt to overthrow a sovereign state.

Notable figures on what passes for “The Right ” these days (unlike “The Right ” of say, Ronald Reagan, who despised Russia above all else) have expressed indifference about the plight of the Ukrainian people.

“I gotta be honest with you, I don’t really care what happens to Ukraine one way or another,” said JD Vance, author of “HillBilly Elegy” and candidate for the Senate in Ohio.

While I get that Vance is kowtowing to the Trumpist Russia lovers hoping to win the Republican primary, I still can’t believe he would be so publicly callous. Just reading his remarks gave me a cold chill. Someone needs to check Vance for a pulse — I’m almost certain he’s dead inside.

And don’t even get me started on Trump calling Putin “savvy” and a “genius” for invading the same sovereign, democratic country that the former president attempted to blackmail for dirt on Joe Biden’s son, triggering his first impeachment.

Fortunately, we’re seeing mostly bipartisan support among sane lawmakers on Capitol Hill for supporting Ukraine by way of $600 million for defensive weapons with more likely on the way.

However, the question remains: Why should the rest of us care about Ukraine?

Simply put, because our humanity is on the line.

Whether you admit it or not, America doesn’t have the greatest track record of late in its overseas adventures and foreign policy. Afghanistan is currently enduring the world’s worst humanitarian disaster, Iraq is a goddamn mess, and Syria is back under the thumb of President Bashar Al-Assaad following a lengthy, destructive civil war, in which Russian forces played a significant role.

I could go on, though I’ll stop here, lest someone accuse me of bashing America by stating facts.

And try as you might to tune it out, you can’t ignore the suffering in Ukraine. This war, like every conflict in the smartphone era, is shaping up to be one of the most comprehensively, citizen-documented conflicts to date, thanks to folks bravely capturing the mayhem coming their way and chronicling their heroic efforts to repel their attackers.

If the images, video, and written stories from the war in Ukraine don’t move you, then perhaps you too should be checked for a pulse and a beating heart.

Because you don’t need to be Ukrainian-American to have a reason to care about the war in Ukraine.

Being a breathing, sentient, and compassionate human should be all the reason you need. 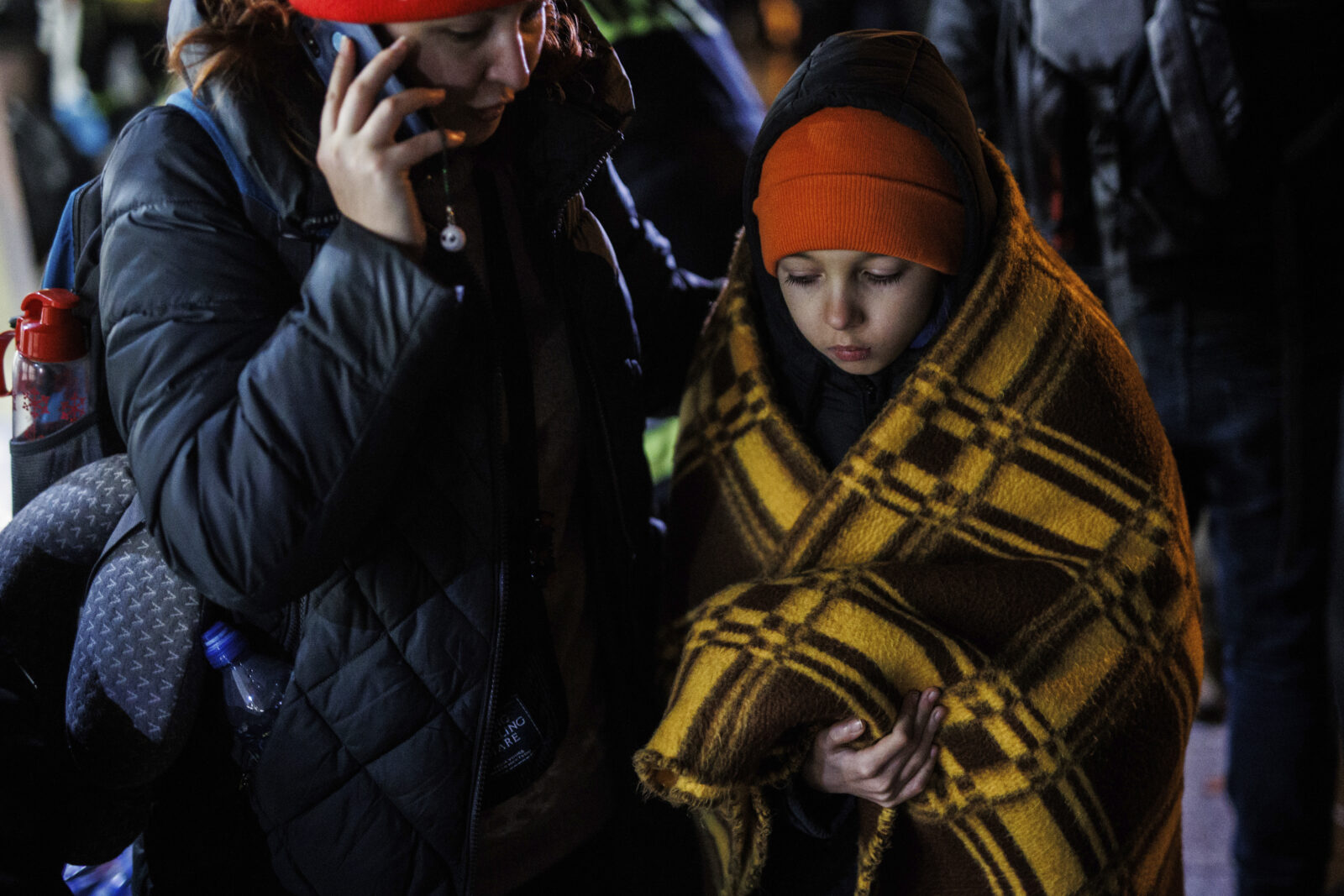 Ukrainian refugees with children arrive at Przemysl train station in Przemysl, Poland. Poland puts the number of people who have entered the country, fleeing the war in Ukraine, at 100,000 since the start of the Russian invasion on February 24. The UN has warned that the number of Ukrainian refugees could reach four or five million, depending on how events on the ground develop in the coming days. (Europa Press via AP) 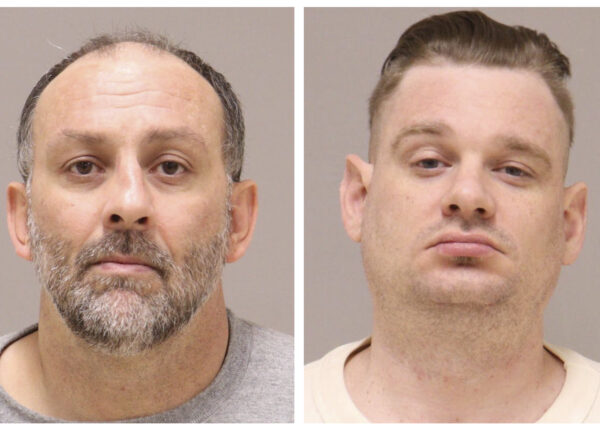 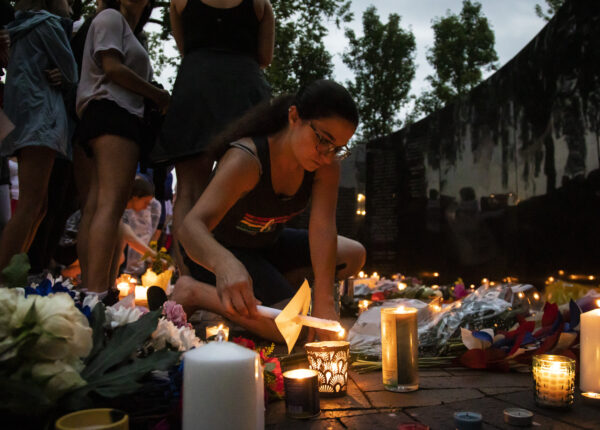