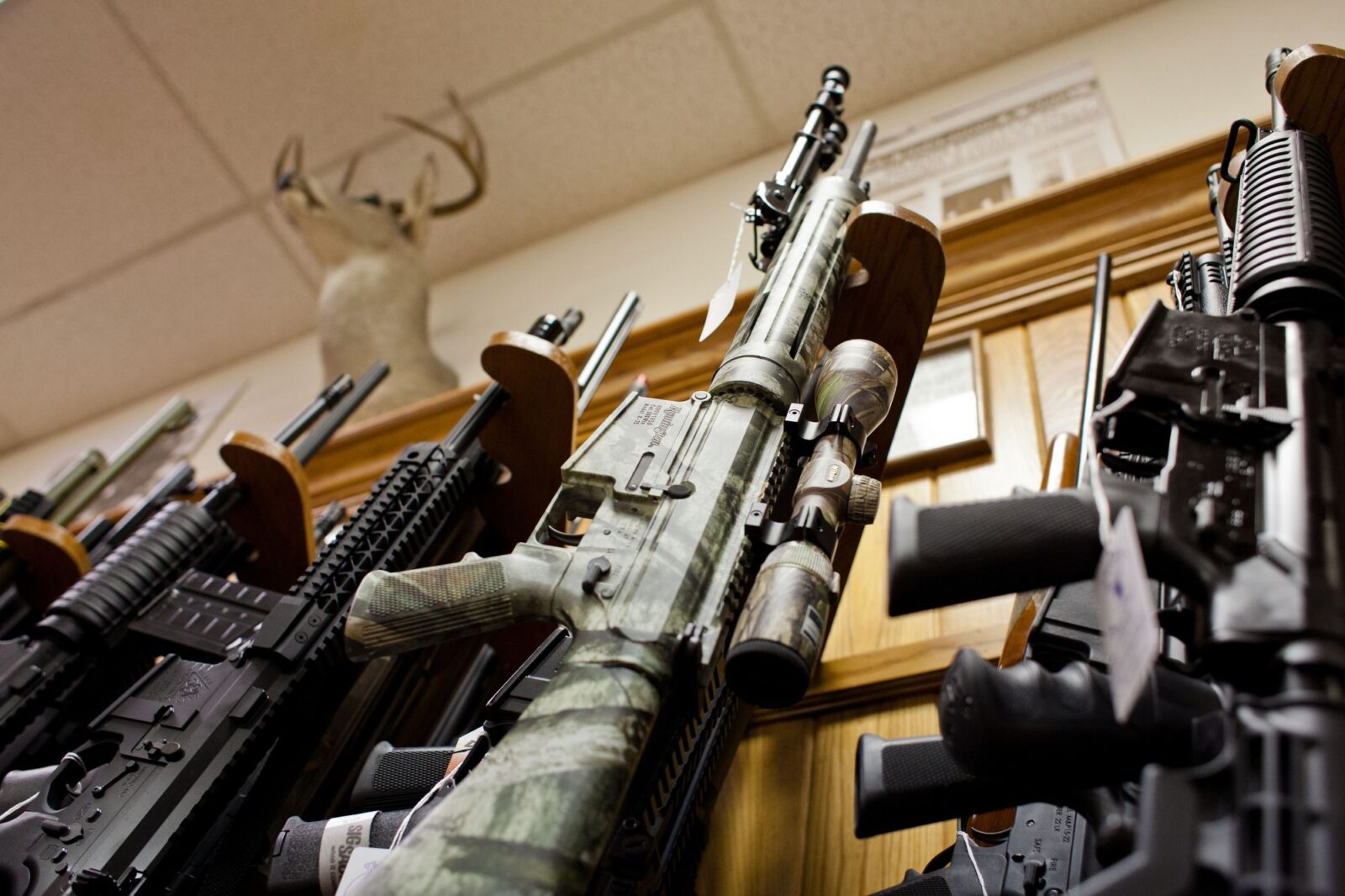 Weapons for sale at a gun store in Austin, Texas. // Callie Richmond for The Texas Tribune

ProPublica is a nonprofit newsroom that investigates abuses of power. Sign up to receive our biggest stories as soon as they’re published.

This article is co-published with The Texas Tribune, a nonprofit, nonpartisan local newsroom that informs and engages with Texans. Sign up for The Brief weekly to get up to speed on their essential coverage of Texas issues.

The fact that the gunman responsible for this week’s massacre in Uvalde, Texas, was able to buy two AR-15s days after his 18th birthday highlights how much easier it is for Americans to purchase rifles than handguns.

Under federal law, Americans buying handguns from licensed dealers must be at least 21, which would have precluded Salvador Ramos from buying that type of weapon. That trumps Texas law, which only requires buyers of any type of firearm to be 18 or older.

Following Tuesday’s massacre at Robb Elementary School, which killed 19 children and two adults, a growing number of lawmakers in Texas and beyond are calling for the minimum age to purchase assault rifles to be raised to 21 from 18. Doing so would require undoing nearly two centuries of more permissive regulations on so-called long guns.

“It’s something that could happen at either the state or federal level, but I don’t see movement on either front,” said Sandra Guerra Thompson, a criminal law professor at the University of Houston Law Center.

Only six states — Florida, Washington, Vermont, California, Illinois and Hawaii — have increased the minimum purchase age for long guns to 21, according to the Giffords Law Center to Prevent Gun Violence. The majority did so following the 2018 massacre in Parkland, Florida, where a then-19-year-old assailant killed 17 people at a high school.

The National Rifle Association sought to repeal the Florida law.

“The ban infringes the right of all 18-to-20-year-olds to purchase firearms for the exercise of their Second Amendment rights, even for self-defense in the home,” the NRA argued in a court filing, according to the South Florida Sun Sentinel. “The ban does not just limit the right, it obliterates it.”

Government attorneys, however, argued that because “18-to-20-year-olds are uniquely likely to engage in impulsive, emotional, and risky behaviors that offer immediate or short-term rewards, drawing the line for legal purchase of firearms at 21 is a reasonable method of addressing the Legislature’s public safety concerns.”

A federal judge upheld the law last year; the NRA is appealing.

A U.S. Court of Appeals recently ruled that California’s version of the law was unconstitutional, though it did uphold a provision that requires adults under 21 to obtain a hunting license before buying a rifle or shotgun.

After the shooting in Uvalde this week, lawmakers in New York and Utah also called on their states to raise the age limit for long gun purchases to 21. U.S. Sen. Dianne Feinstein introduced federal legislation earlier this month — less than a week before the Uvalde shooting — that would raise the minimum age to purchase assault weapons to 21 from 18; the California Democrat said in a statement that it was in response to a shooting that killed 10 people at a Buffalo supermarket. That gunman also was 18 years old.

Small rifles meant for children, including a miniature AR-15, for sale at a gun store in Austin. // Jordan Vonderhaar for The Texas Tribune

Lindsay Nichols, federal policy director at the Giffords Law Center to Prevent Gun Violence, said that increasing the age requirement at the federal level may be more effective because federal authorities can inspect and discipline licensed firearm sellers.

In the hours after the shooting in Uvalde, there was some confusion about what types of firearms Ramos had used. Texas Gov. Greg Abbott initially said that Ramos had a handgun and possibly a rifle. That prompted some to speculate that Ramos had been able to get hold of the weapons more easily because of recent changes to the gun laws in Texas, including a bill passed last year that allows Texans to carry handguns without a permit or training. But those early reports turned out to be inaccurate.

After it became clear that the weapon used was a rifle, Texas Democrats questioned why Ramos was able to purchase one at the age of 18.

“Why do we accept a government that allows an 18-year-old to buy an assault rifle, but not tobacco products?” state Rep. Nicole Collier, a Fort Worth Democrat who chairs the Texas Legislative Black Caucus, said in a statement. “The hypocrisy of government is deafening. We can develop gun policy that does not infringe upon one’s constitutional right, while preserving and protecting life; that’s called multitasking and we can do that.”

State Rep. Jarvis Johnson, a Houston Democrat, called on Abbott to convene a special session of the Legislature so lawmakers could “pass real gun reforms,” including raising the minimum age to purchase long guns.

“Enough is enough,” he said.

Such a move would reverse a decades-old Texas system that treats handguns differently from long guns, which have long been exempted from state rules on open carry.

The disparate rules date back to the post-Civil War era, when the state — counter to its modern-day reputation — adopted some of the strictest gun control laws in the nation.

“Despite its stereotype of being a state where cowboys promiscuously tote six-shooters, Texas is one of the few states that absolutely prohibits the bearing of pistols by private individuals,” wrote firearms attorney Stephen Halbrook in a 1989 Baylor Law Review article, six years before former Texas Gov. George W. Bush relaxed rules on handguns considerably.

Following spasms of violence that were then plaguing the young state in the 19th century, lawmakers “started specifically targeting weapons that they equated with crime,” said Texas historian Brennan Rivas, who is writing a book about the state’s early gun laws. “They equated bowie knives, daggers and pistols with interpersonal violence and crime.”

Muskets, rifles and shotguns, by comparison, were excluded because they were used for hunting or participating in a militia.

“They didn’t consider long guns to be deadly weapons,” Rivas said. “Those had valuable uses. Whereas these other weapons were kind of like a plague on polite society.”

Lawmakers of that time could not have envisioned that long guns would evolve from lumbering hunting rifles into AR-15s capable of firing dozens of rounds per minute, Rivas added.

But any tighter requirements appear unlikely to pass in Texas.

Just last year, following high-profile massacres in El Paso and in Midland and Odessa in 2019, lawmakers approved a variety of measures that loosened gun regulations. In addition to authorizing the carrying of handguns in public without a permit or training, the laws ban the governor from limiting gun sales during an emergency and allow gun owners to bring their weapons into hotel rooms.

During a Wednesday press conference at Uvalde High School, Abbott repeated a claim he and other Republican state leaders have often made, that mental health issues are to blame for the streak of mass shootings, not lax gun regulations.

Officials conceded that they were not aware that the gunman had any criminal or mental health issues.

“The ability of an 18-year-old to buy a long gun has been in place in the state of Texas for more than 60 years,” Abbott said. “And why is it that for the majority of those 60 years we did not have school shootings? And why is it that we do now?”