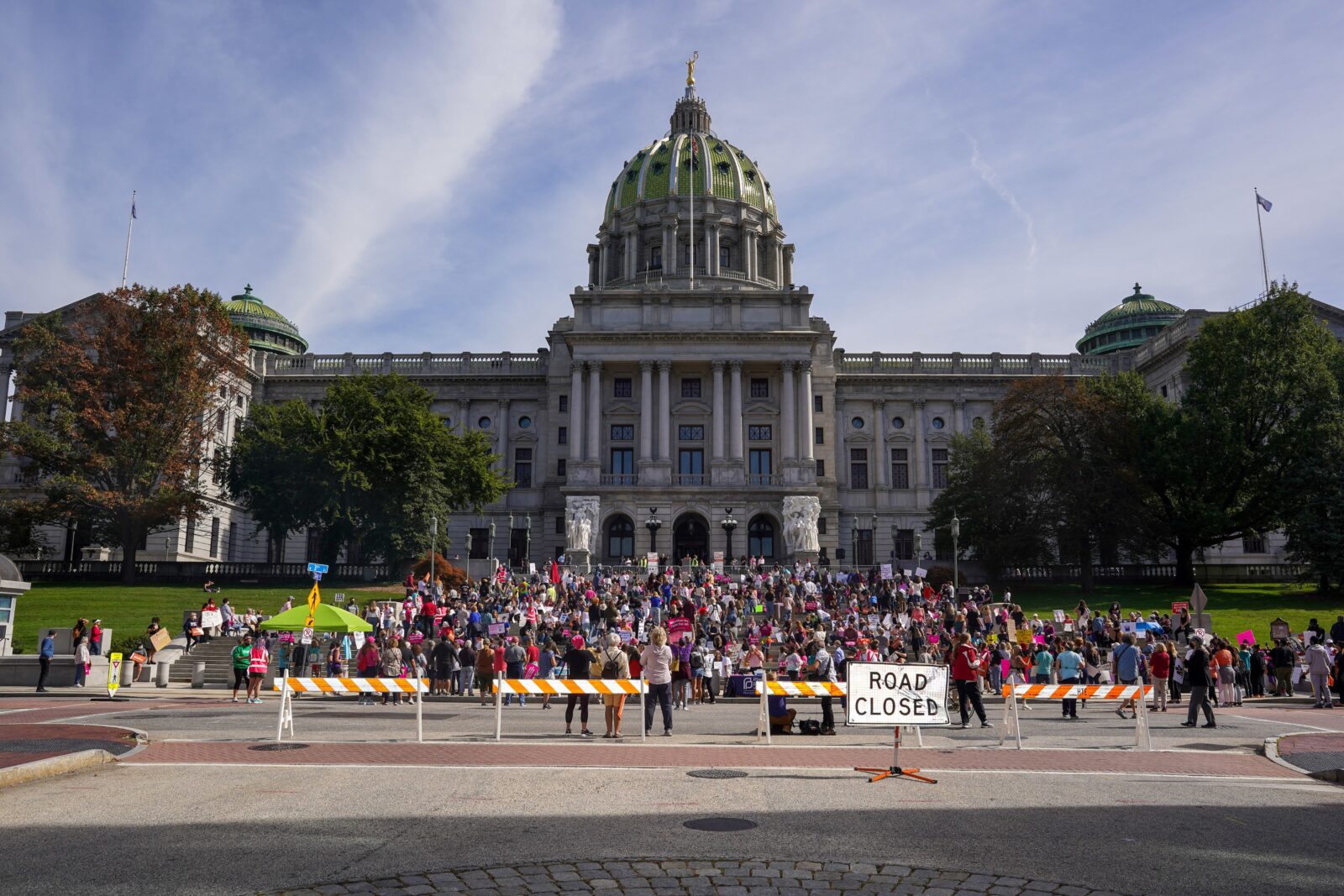 If Roe v. Wade is overturned, decisions about abortion access will be left to the states. // Thomas Hengge / Philadelphia Inquirer

HARRISBURG — The outcome of the Pennsylvania governor’s race could determine the future of legal abortion access in the state, which is uncertain following the leak of a draft U.S. Supreme Court opinion that would overturn Roe v. Wade.

Such a decision would leave how, where, and why someone could get a legal abortion, if at all, up to each state’s legislature and governor. All nine of the Republican gubernatorial candidates in Pennsylvania support additional abortion restrictions, and at least five would seek a complete ban with no exceptions.

Democratic Gov. Tom Wolf, a former Planned Parenthood clinic escort who is statutorily unable to seek another term, has blocked efforts by the GOP-controlled legislature to further curtail abortion access during his seven years in office. Republicans will likely maintain control of both the state House and Senate this November, raising the stakes in an already critical governor’s race.

The outcome of the Pennsylvania governor’s race could determine the future of legal abortion access in the state, which is uncertain following the leak of a draft U.S. Supreme Court opinion that would overturn Roe v. Wade.

According to a draft opinion circulated within the court and reported by Politico Monday night, the U.S. Supreme Court has already voted to overturn Roe v. Wade, a landmark court decision that has protected the right to abortion for almost 50 years. Chief Justice John Roberts on Tuesday confirmed the draft’s authenticity but said it was not final.

“We’ve gotten to this point because of a well-organized and continuously mobilized pro-life movement that has spent the last half-century working to this goal,” said Lehigh University sociologist Ziad Munson, who has written about abortion politics.

Opponents of abortion celebrated the leaked opinion with a mix of hope for the future, but also some reservations as to what the court’s final decision will be.

Michael Ciccocioppo, executive director of the Pennsylvania Pro-Life Federation, said in an email that the group “will let the Supreme Court speak for itself and wait for the Court’s official opinion,” and declined to comment “on hypothetical questions in this matter.”

For now, at least, the precedent set in Roe v. Wade and affirmed in Planned Parenthood of Southeastern Pennsylvania v. Casey will remain in place.

Under state law, abortion is legal up to 24 weeks into a pregnancy, with later exceptions made for extraordinary circumstances like the health of the person giving birth.

It is also the only law regulating a medical procedure written into the state criminal code, said Sue Frietsche, founder and director of the Western Pennsylvania office of the Women’s Law Project. The act carries heavy criminal and civil penalties for doctors and nurses who violate it.

“It’s a manifestation of abortion stigma,” she said. “The purpose of our legislature in putting what is really the regulation of health care into the crimes code is to cast a cloud of unsavory suspicion over the whole area.”

The state of access, and what the future could bring

Should the court strike Roe down, nothing would immediately change for Pennsylvanians.

In the short term, abortion providers expect Pennsylvania to become a sanctuary for people from states where access would end if Roe were overturned, said Melissa Reed, president and CEO of Planned Parenthood Keystone.

Without Roe, Reed said she expects an additional 8,500 patients to arrive annually from other states on top of the 7,600 abortion patients Planned Parenthood Keystone serves each year.

“I think it’s important that people know that the consequences of this are going to be truly dangerous and unprecedented,” Reed said.

But depending on who succeeds Wolf as governor, the situation could change rapidly for Pennsylvania residents.

“The next governor will have a bill on their desk to restrict or outlaw abortion rights. I will of course veto it. My opponent will sign it.” — Attorney General Josh Shapiro, the only Democratic candidate for governor who will appear on the May 17 primary ballot

At a debate in late April, Mastriano, who has consistently appeared at or near the top of polls, called legal abortion “a national catastrophe,” before promising to “move with alacrity” on a six-week abortion ban.

“We lack a William Wilberforce of our time,” Mastriano said, comparing the movement to abolish slavery in 18th and 19th century Britain to efforts to restrict abortion access. “We don’t have any champions in Pennsylvania.”

A sixth candidate, former U.S. Rep. Melissa Hart (R., Pa.), said she would only support an exception for the life of the parent. Anything else, she said, would be inconsistent.

“If you believe this is a child, and this child has a right to life, then we can work with the pregnant mother through the crisis,” Hart told Spotlight PA.

Attorney General Josh Shapiro, the only Democratic candidate for governor who will appear on the May 17 primary ballot, supports maintaining access to abortion.

“The next governor will have a bill on their desk to restrict or outlaw abortion rights,” Shapiro said during a press call Tuesday. “I will of course veto it. My opponent will sign it.”

With Wolf’s veto a sure thing, Republican lawmakers — with the support of some of their Democratic colleagues — have passed multiple bills to further restrict abortion access, including a 20-week ban in 2017. The Democratic governor rejected all of them.

“I am definitely pro-life,” Mehaffie said, “but I do believe in the exceptions. I have always been upfront about that.”

A lot could change between now and 2023, he added, as a wave of legislative retirements and new political maps brings fresh faces to the General Assembly who do not share his reservations.

Republican candidates who no longer support even the limited exceptions for rape, incest, or the life of the parent are proof of how successful the movement to restrict abortion has been, said Munson of Lehigh University.

The exceptions started as a compromise “that the movement never really wanted, but the public does by a wide margin,” Munson said.

A March 2022 Franklin & Marshall College poll found that 31% of Pennsylvania voters think abortion should be legal in all circumstances, 13% in none, and 53% under “certain circumstances.” What those circumstances are was not defined in the question.

In an email, House Republican spokesperson Jason Gottesman cautioned that the GOP was still awaiting confirmation of the court’s opinion and that “any true direction or plan would be premature.”

“We will continue to review pending pro-life legislation and any further decisions will be made through the course of the normal legislative process,” Gottesman said.

Republican candidates who no longer support even the limited exceptions for rape, incest, or the life of the parent are proof of how successful the movement to restrict abortion has been, said Lehigh University sociologist Ziad Munson, who has written about abortion politics.

Democrats, she added, “are committed to this fight and will work alongside our partners to ensure women’s rights are secure in the commonwealth.”

The state’s courts could also play a role in the coming debate.

A lawsuit pending before the Pennsylvania Supreme Court, filed by abortion providers against the state Department of Human Services, could enshrine the procedure as a protected right under the state constitution’s equal protection clause. Attorneys from the Women’s Law Project are part of the legal team representing the providers.

The suit argues Pennsylvania’s Medicaid program discriminates against women and people who give birth, Frietsche said, by denying coverage for abortion because of “gender-based stereotypes about women’s proper role.”