If you’re looking for the next Marjorie Taylor Greene, the GOP congresswoman and far-right conspiracy theorist from Georgia, look no further than the Rust Belt. It’s quickly becoming the heartland of an angry new GOP vanguard that is QAnon-curious and has as much scorn for the Republican establishment as it does for Democrats.

In Michigan, Ohio, and Pennsylvania, some political candidates aren’t just sympathetic to the mob that stormed the U.S. Capitol on Jan. 6 – some of them were in D.C. that day, either at the rally beforehand or part of the insurrection itself.

“Marjorie Taylor Greene is like my soulmate,” said Audra Johnson, who is running in a crowded GOP primary for Congress on Aug. 3 in Michigan’s Third District. She attended the Jan. 6 rally by former President Donald Trump that preceded the storming of the U.S. Capitol. “I love what she stands for, I love the hard line that she’s drawing.”

Johnson is one of six people who were in Washington, D.C. on Jan. 6 and are now running for office, in Michigan alone. The Rust Belt was a hub for insurrectionists, based on charges filed so far. Pennsylvania alone has had more than 45 people arrested in connection with the Jan. 6 riot, out of about 500 arrests nationwide. 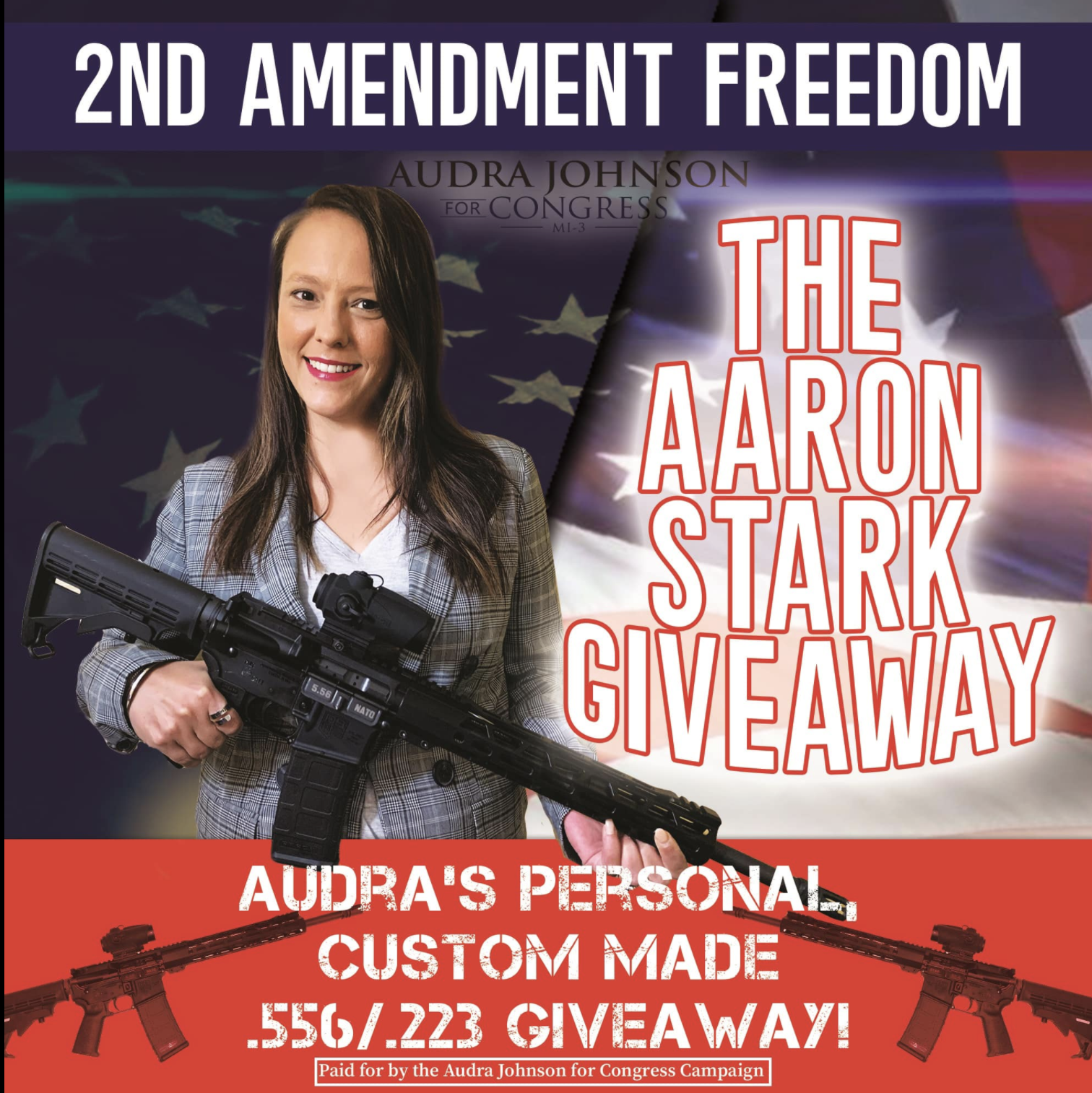 Michigan Congressional candidate Audra Johnson held a political fundraiser in June in which she was giving away an AR-15, a semi-automatic weapon. Credit: Audra Johnson for Congress Facebook page

Several elected officials from the region attended either the rally that preceded the riot or the capitol siege itself, and the Rust Belt has a history of far-right activity. Michigan has been a cradle for the militia movement. Ohio has the second most anti-government extremist groups in the country, according to the Southern Poverty Law Center.

Pennsylvania has numerous militia and anti-government groups and some politicians there have recently attended events with them.

Johnson gained attention as the “MAGA Bride” for her Trump-themed wedding but her run is most interesting for the district’s recent political history.

Johnson has no such concerns about Trump. She brought dozens of people with her to the Jan. 6 pro-Trump rally at the Capitol aimed at overturning the presidential election.

She says she never entered the Capitol building and that destruction of property is a crime. Five people also died as a result of the riot, including a police officer. But Johnson also says she heard police may have given protesters permission to enter.

“What I’m confused about is the amount of attention (the riot) is getting when all last summer there was millions of dollars of damage from liberal protesters,” she said, referring to damage done during protests that erupted around the country after the murder of George Floyd at the hands of a Minneapolis Police officer.

She still claims that Trump was the rightful winner of the 2020 election, despite courts having found no evidence of widespread voter fraud and Republican officials in several states validating President Biden’s wins. She has also claimed that America is in a “civil war,” though she says that shouldn’t be taken as encouraging violence.

Johnson has used slogans like “The Storm Is Coming,” which is connected to the discredited QAnon conspiracy theory, which includes the idea that a cabal of Democrats run a cannibalistic pedophilia ring.

In an interview with Postindustrial, she at first said she is not affiliated with QAnon. But then she said some of the things “Q” posted were true.

When asked “do you believe there’s a cabal of Democrats involved in pedophila and even murder,” the crux of the baseless QAnon conspiracy theory, Johnson took a long pause.

“I believe there’s an evil faction in our world,” she said. “Is it strictly Democrat? No.”

In Ohio, J.R. Majewski, who appeared in a QAnon shirt while appearing on “Fox And Friends” is running as a Republican in in Ohio’s 9th District. It’s currently represented by Congresswoman Marcy Kaptur, a Democrat and the longest-serving woman in the House of Representatives.

Despite wearing the shirt, Majewski now says he does not believe in the QAnon conspiracy, though he acknowledged  associating with people who say they believe in it. 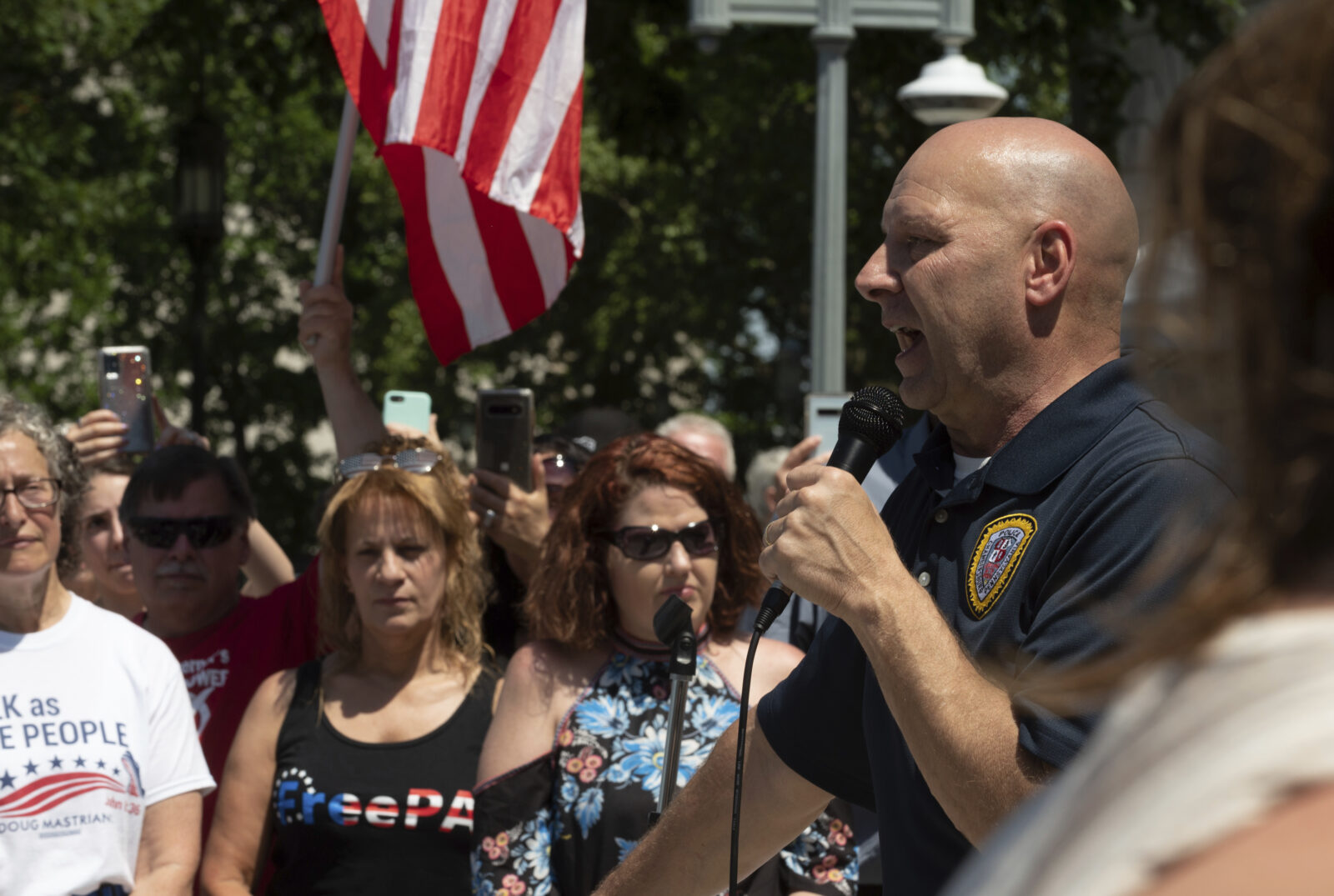 Pennsylvania State Senator Doug Mastriano Speaks at ReOpen Rally in Harrisburg, PA on June 5. Mastriano is considering a run for Governor of Pennsylvania in 2022. // Zach D Roberts/ NurPhoto via AP

“I wore the shirt because a friend of mine recommended I wear it,” he said.

Majewski says he raised upwards of $20,000 to bring more than 60 people to the Jan. 6 pro-Trump rally that devolved into a riot. Majewski said he never entered the Capitol building and disavowed the violence, but he did say he had hoped the rally would help convince the Senate and then-Vice President Mike Pence to overturn the results of the presidential election.

He stands by his participation in the rally.

“What I did was extremely patriotic,” he said.

Then there’s Pennsylvania state Sen. Doug Mastriano, a Republican who said Trump encouraged him to run for governor and is widely expected to do just that (Mastriano has said he’s praying about it). He’s pushing for a review of the 2020 election results in the Commonwealth, mirroring a controversial effort in Arizona.

Some counties have already raised objections to offering up voting equipment and records. for examination.

The former Army colonel’s campaign spent thousands of dollars on buses to ferry people to the Jan. 6 rally. Though he has denied participating in the riot, video evidence contradicts what he said, appearing to show him and his wife well past police barricades as the mob stormed the Capitol.

Mastriano did not respond to multiple requests for an interview for this story.

Mastriano also attended a rally at the Gettysburg battlefield last year, where militia members converged after a hoax circulated about “antifa” burning the U.S. flag and destroying monuments. His five-page letter to the Trump-era Department of Justice touting voter fraud claims was cited in an investigation into the causes of the Jan. 6 insurrection.

“The old GOP is dead. So I think we're gonna see more and more people like me come out and run.” – Audra Johnson

Jared Holt, a fellow at the think tank The Atlantic Council who studies extremism, said when candidates who push conspiracy theories win offices, it further legitimizes those views in the eyes of some people.

Daryl Johnson, who spent 25 years monitoring domestic extremism for the federal government, including for the Department of Homeland Security, said he’s concerned that an increasing number of candidates are embracing fringe theories with little pushback from more mainstream politicians.

“It’s going to take Republican leadership, a bipartisan approach to this,” he said. “There are some Republicans that are coming around and being outspoken about this, but the party itself is more embracing it and fanning it than denouncing it.”

Johnson did say he’s encouraged by the Biden administration’s unveiling in mid-June of a strategy to combat domestic extremism, the first of its kind. He said it’s the most optimistic he’s been about combating extremism in a decade.

But Johnson, the congressional candidate, said she believes she’s  just the beginning of a trend.

“The old GOP is dead,” she said. “So I think we’re gonna see more and more people like me come out and run.”

Heath Druzin is a journalist who covers anti-government movements and recently finished a stint as the Idaho reporter for the public radio project Guns & America. He is based in Idaho.