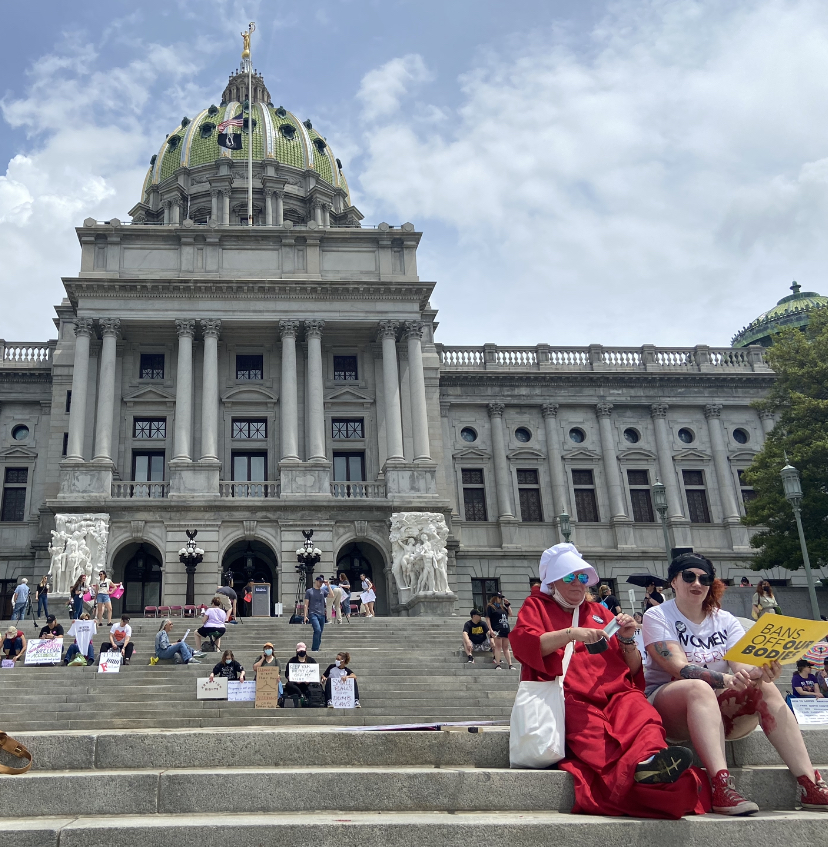 Hundreds of protestors rally in Harrisburg on Saturday, May 14, 2022, to promote abortion access. // Capital-Star photo by Marley Parish

While both chambers of Pennsylvania’s General Assembly are controlled by Republicans, Democratic Gov. Tom Wolf, frequently has been the decider of reproductive health policy in Pennsylvania.

Wolf, a former Planned Parenthood volunteer, has vetoed numerous GOP-backed attempts to restrict access to abortion and reproductive health care during his two terms. He leaves office in January 2023.

With Wolf’s tenure winding down, and the U.S. Supreme Court set to issue an opinion in a court case that could strike down the landmark Roe. v. Wade ruling, here are the reproductive health bills before Pennsylvania’s General Assembly this legislative session.

Known as “the heartbeat bill,” SB378 would require physicians to “determine whether the baby has a heartbeat” before performing an abortion. If a heartbeat is detected, the bill would prohibit physicians from performing the abortion. Medical experts have called “heartbeat bills” misleading because embryos do not have a developed heart by six weeks gestation.

Borowicz is sponsoring a “heartbeat bill” similar to the SB387 that likewise would prohibit an abortion from taking place if a fetal heartbeat is detected by a physician.

The bill, reintroduces legislation that would prohibit an abortion “solely on the diagnosis of possible Down Syndrome.” The previous bill banning abortion on the basis of a Down Syndrome diagnosis was vetoed by Democratic Gov. Tom Wolf in 2019.

Another reintroduced piece of legislation, this bill would similarly prohibit abortion solely due to an in-utero Down Syndrome diagnosis by amending the Pennsylvania’s Abortion Control Act.

This bill would amend the Constitution of Pennsylvania to stipulate that there is “no right to an abortion or funding for an abortion” guaranteed by the commonwealth’s constitution.

Last Action: On Second Consideration in the Senate on June 6, 2022

This bill would similarly amend the state Constitution to stipulate that there is “no right to an abortion or funding for an abortion” guaranteed by the commonwealth’s constitution.

This bill, which would prevent the state entities such as the Department of Human Services from establishing a contract with or making a grant to any entity “that performs abortions that are not federally qualified abortions or maintains or operates a facility where such abortions are performed, except as required by federal law when the services are provided under Medicaid and by a qualified provider approved by the Centers for Medicaid and Medicare Services.” The bill does not change funding from women’s health services.

This bill would require that a fetus be given pain medication prior to an abortion if “the fetus is more than 12 weeks gestational age.”

This piece of reintroduced legislation would require insurance providers to provide coverage for contraceptives and lifts pre-authorization requirements on certain contraceptives.

Another piece of reintroduced legislation, HB 289 would require that abortion facilities post their Department of Health annual inspection results and their plan of correction on their facility’s website.

This bill would require that facilities and providers offering pregnancy-related services meet state healthcare-related regulations and patient safety standards set by the Health Care Facilities Act. The bill would also require providers to “disclose the use of those dollars in the advertisement, and ensure information provided during the provision of their services is medically accurate.”

This bill would prohibit crisis pregnancy centers, which are organizations that provide prenatal services and counseling through an anti-abortion lens, from sharing personal information without the written permission of the patient.

Last Action: Referred to House Health Committee on May 4, 2022

Similar to SB 1217, this bill would prohibit crisis pregnancy centers from sharing personal information without the written permission of the patient.

Last Action: Referred to House Education Committee on May 5, 2021

This reintroduced piece of legislation would require Pennsylvania schools to teach “age-appropriate, medically accurate, comprehensive sexuality education to all grade levels.” It also proposes that state funds not be used to health education programs that “withhold health-promoting or lifesaving information about sexuality-related topics, including abortion, HIV, sexual violence or human trafficking.”

Last Action: Referred to House Health Committee on May 27, 2022

This legislative package of four bills – all of which are currently before the House Health Committee – seeks to end state funding for crisis pregnancy centers, remove state implemented restrictions on abortion providers, and provide funding to family planning programs, among other things.

A native Pennsylvanian, Cassie Miller worked for various publications across the Midstate before joining the team at the Pennsylvania Capital-Star. In her previous roles, she has covered everything from local sports to the financial services industry. Miller is currently pursuing her master’s degree in professional journalism at the University of Nebraska-Lincoln. In addition to her role at the Capital-Star, Miller enjoys working on her independent zines, Dead Air and Infrared.