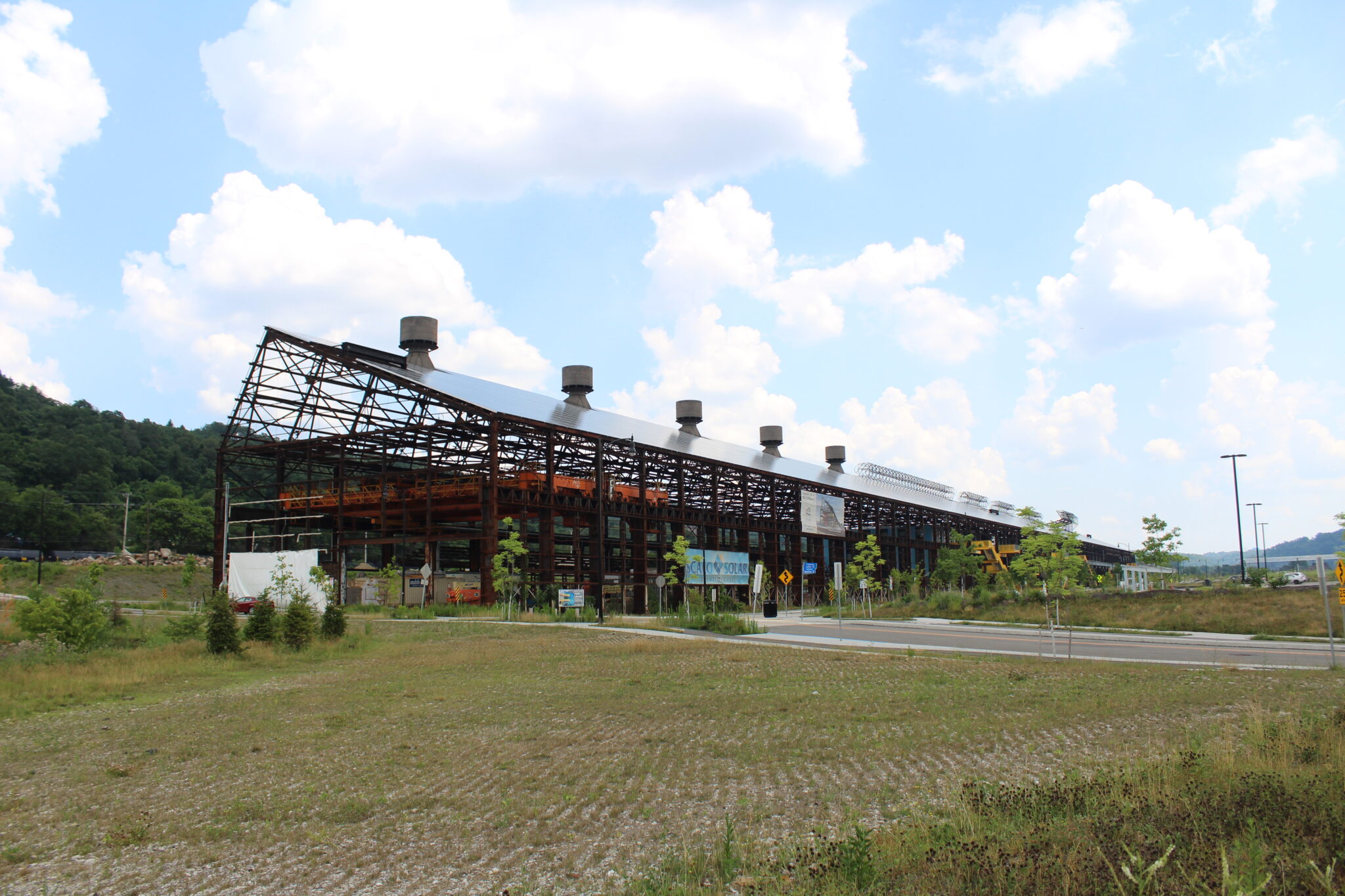 Mill 19 is located on nearly 200 acres known as Hazelwood Green, once an industrial hub with J&L Steel Hazelwood Works and LTV Steel. When the steel industry collapsed, Pittsburgh-area foundations purchased the urban brownfield along the river with a long-term vision of revitalizing the site. (photograph provided by RIDC)

What was once an air-polluting, smoky steel mill now uses clean solar energy.

Mill 19, located in Pittsburgh’s Hazelwood neighborhood, had close to 5,000 solar panels on its roof this summer, after a year-long installation project. The 85-foot-tall exoskeleton dates back to the days when the site was the LTV Coke Works, but it now stands over two new buildings that house businesses including Carnegie Mellon University’s Advanced Robotics for Manufacturing Futures Initiative. The panels produce enough energy to power these buildings and more, without tapping into fossil-fuel-based energy.

“The aspiration is to make this one of the greenest developments in the country,” said Tim White, senior vice president of development for RIDC, which owns Mill 19. The Regional Industrial Development Corporation, based in the Pittsburgh area, is a nonprofit economic development organization.

More large-scale organizations are turning to solar energy to provide some or all of their power, in Western Pennsylvania. The move towards clean energy contrasts with the region’s reliance on heavy manufacturing that led to Pittsburgh’s nickname, “The Smoky City.”

Mill 19 is one example of a facility in Western Pennsylvania that’s turning to solar energy to provide all or some of their power; universities are choosing solar as well. The reasons are simple, and the decision is easy: Solar is renewable, cleaner, cheaper, and simply better for the environment, White said. Look at the two buildings under the Mill 19 shelter: They would require more than 770 tons of coal to power every year.

“That’s the equivalency: Think about that and the effects of that,” said White, whose grandfather, John Higgins, worked at the LTV mill for 25 years after World War II. “If you can imagine … your typical home, this would power 169 homes every year for 25 years.” 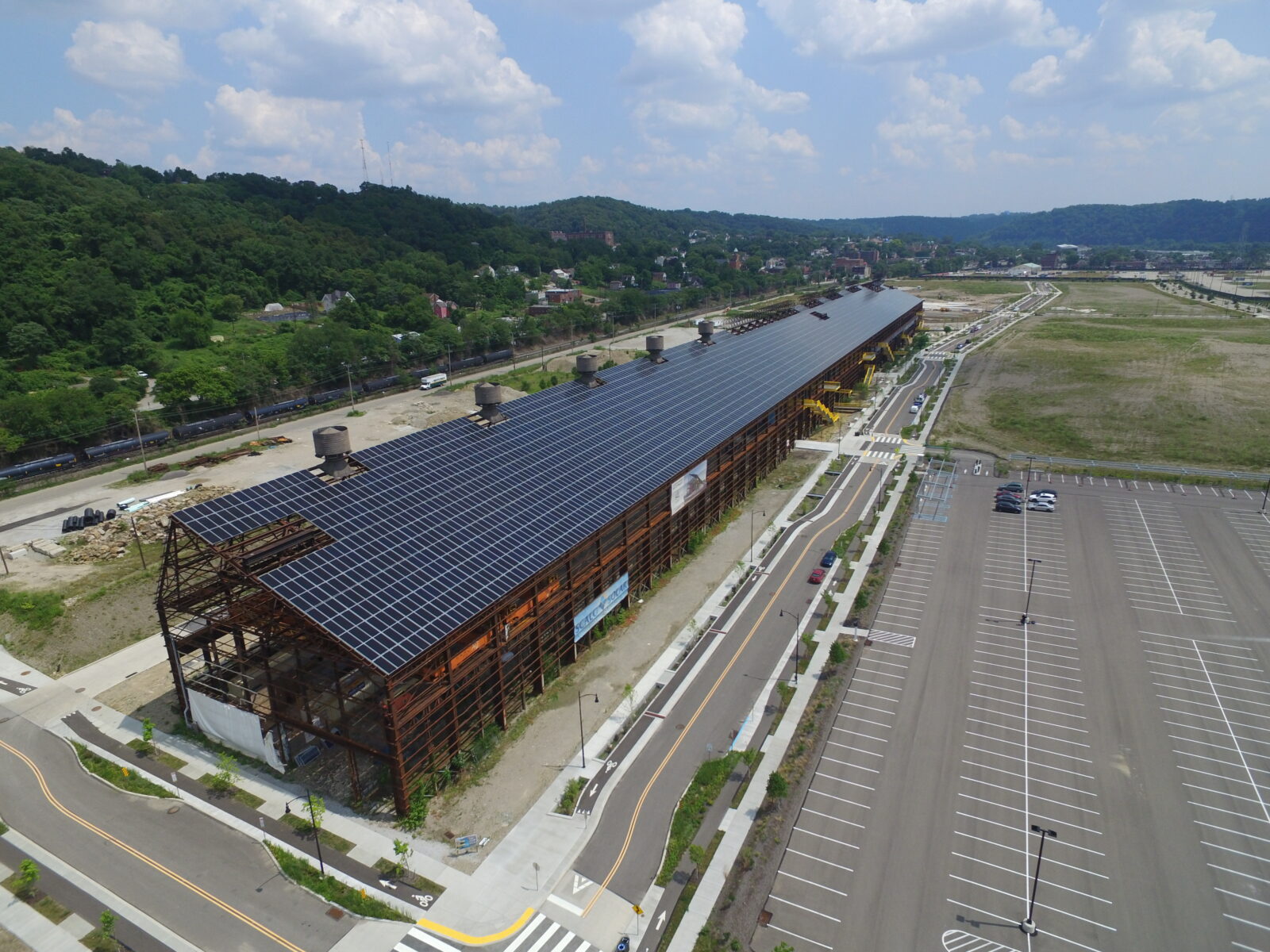 Mill 19, with its residential-style sloping ceiling instead of the flat ceiling more common on commercial buildings, is said to be the largest single-slope solar installation in the country. The former mill located along the Monongahela River in Pittsburgh now houses companies including Carnegie Mellon’s Advanced Robotics for Manufacturing. The nonprofit Regional Industrial Development Corporation operates Mill 19.(photograph provided by RIDC)

Mill 19 is about 1,400 feet long and just more than 100 feet wide. It is part of the Hazelwood Green site, a 178-acre lot along the Monongahela River designated for environmentally-friendly development.

Scalo Solar Solutions, based in the Pittsburgh suburb of Crafton, provided the solar panels — just one of which provides as much power as four tons of coal in its lifespan, said Michael Carnahan, vice president and general manager of Scalo.

Pittsburgh, however, is probably slower to accept change in energy consumption, he said — but the area is progressing.

“We are still trying to redefine our identity,” Carnahan said. “The steel mills were our identity for decades. We are re-purposing and re-imagining from what we were to what we can become.”

“I think it sets an example,” he said. “You have such a great example of repurposing some of our old infrastructure, which Pittsburgh has a lot of. … I think it’s a wonderful, great example of what this city is capable of and how we can redefine ourselves for a future economy.”

Mill 19 is an example of a major solar installation on a site with an industrial past. Yet several large organizations with different backgrounds — such as the University of Pittsburgh and Chatham University —  are joining the solar movement with smaller installations on specific parts of their campuses.

On the University of Pittsburgh’s main campus in Pittsburgh’s Oakland neighborhood, Benedum Hall — which houses the Swanson School of Engineering — has had a rooftop solar installation of 4.32 kilowatts since 2012. Near the New York border in north-central Pennsylvania, Pitt’s Bradford campus also installed solar panels in 2014 on one building’s roof, where the panels produce 2.6 kilowatts.

Aurora Sharrard, Ph.D., director of sustainability for Pitt, said the school’s solar installations are small; the one on the main campus produces just 4,000 kilowatt-hours annually. But the university has been researching the benefits of solar energy and put together the Pitt Sustainability Plan in 2018. In this plan, Pitt’s goals include using 50 percent renewable energy — which includes solar, wind and hydropower — by 2030. Officials are now researching new locations for rooftop solar set-ups.

“It’s a fairly straightforward way to reduce an organization’s carbon footprint while also creating local jobs,” said Sharrard, who says she knows several people in the Pittsburgh area who are installing solar panels on their houses.

Pitt’s solar panels are barely noticeable from the ground because the buildings are tall. By contrast, solar panels atop houses are much more visible.

The university has experienced no problems with the solar electricity functioning properly, she said, and only good can come from using more of this power.

“In our current world, health and disparity are parts of that conversation, as is climate change. Solar is a big part of that opportunity for Pitt, the region, and the globe,” Sharrard said. 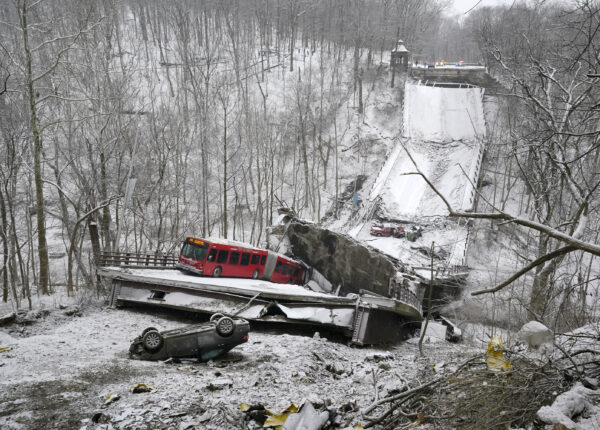