Dan Staggs puts crayon to pavement in these temporary street sketches that are intended to fade away. // Chris Killian, NowKalamazoo 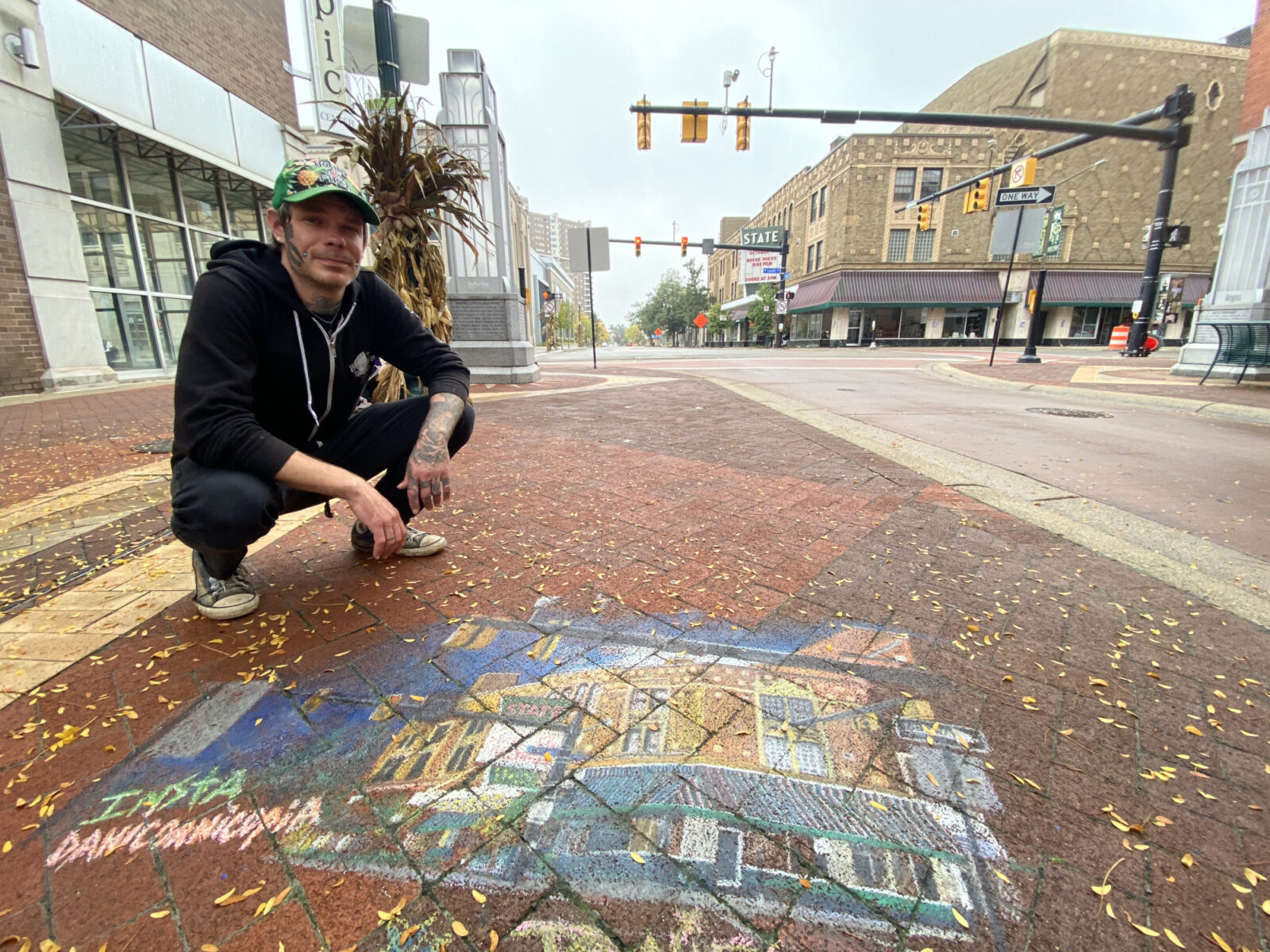 Dan Staggs puts crayon to pavement in these temporary street sketches that are intended to fade away. // Chris Killian, NowKalamazoo

There were days when Dan Staggs’s father would take him into freshly plowed fields near their southern Indiana home, the two of them looking for arrowheads in the fluffy soil. The keen eye he developed searching for the artifacts would wind-up serving him well later in life, fostering a special attention to detail.

A tattoo artist at Jester’s Quarters for the past 12 years, his is a job that requires a gentle touch and a firm confidence in his skills. Afterall, his art is permanent, worn on the backs and arms and legs and chests of thousands of people, walking displays of his talent, his creativity, his passion.

But Staggs’s latest creative endeavor is meant, in a way, to be here for a while, appreciated, and then disappear, erased by the elements. 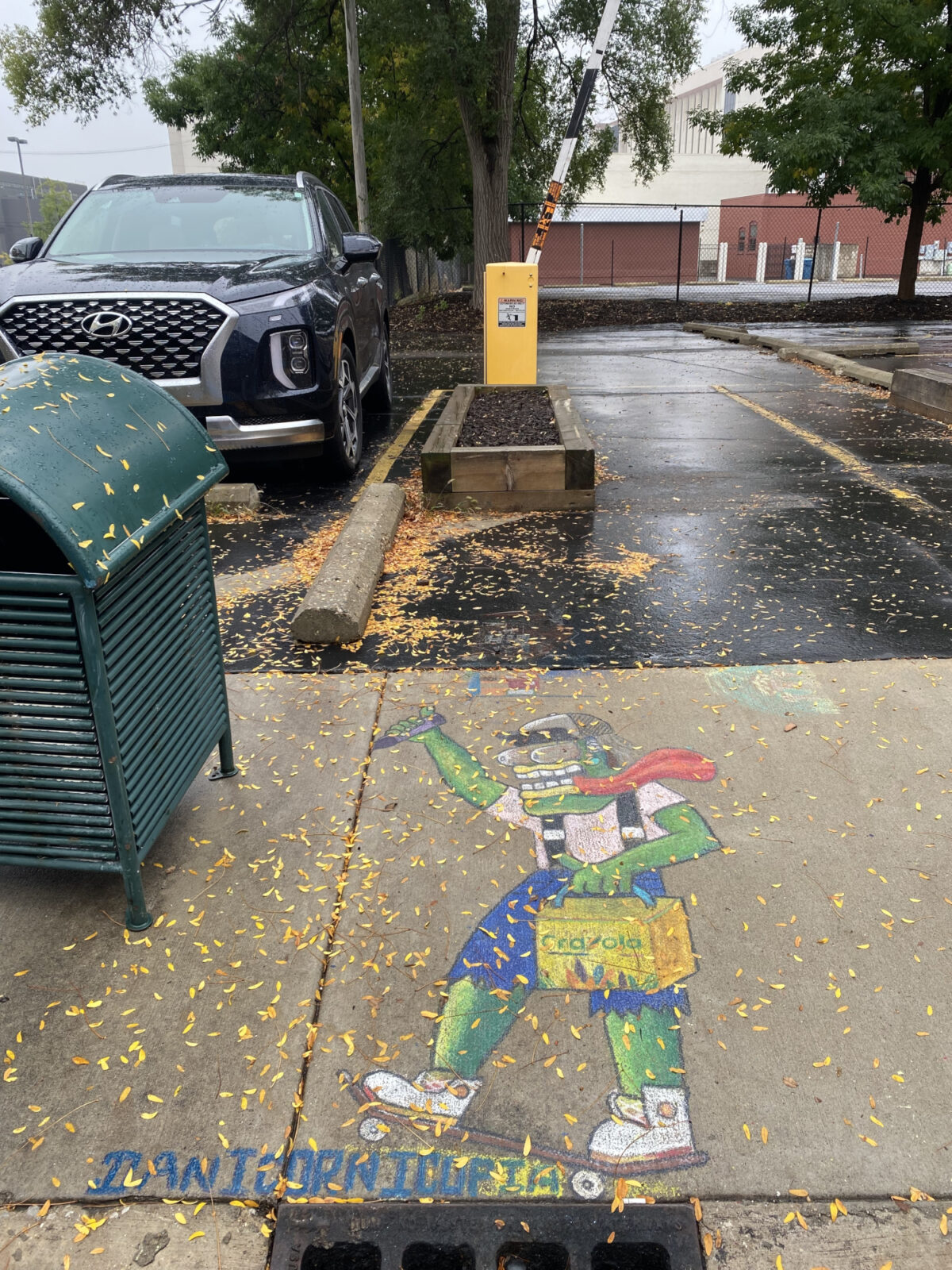 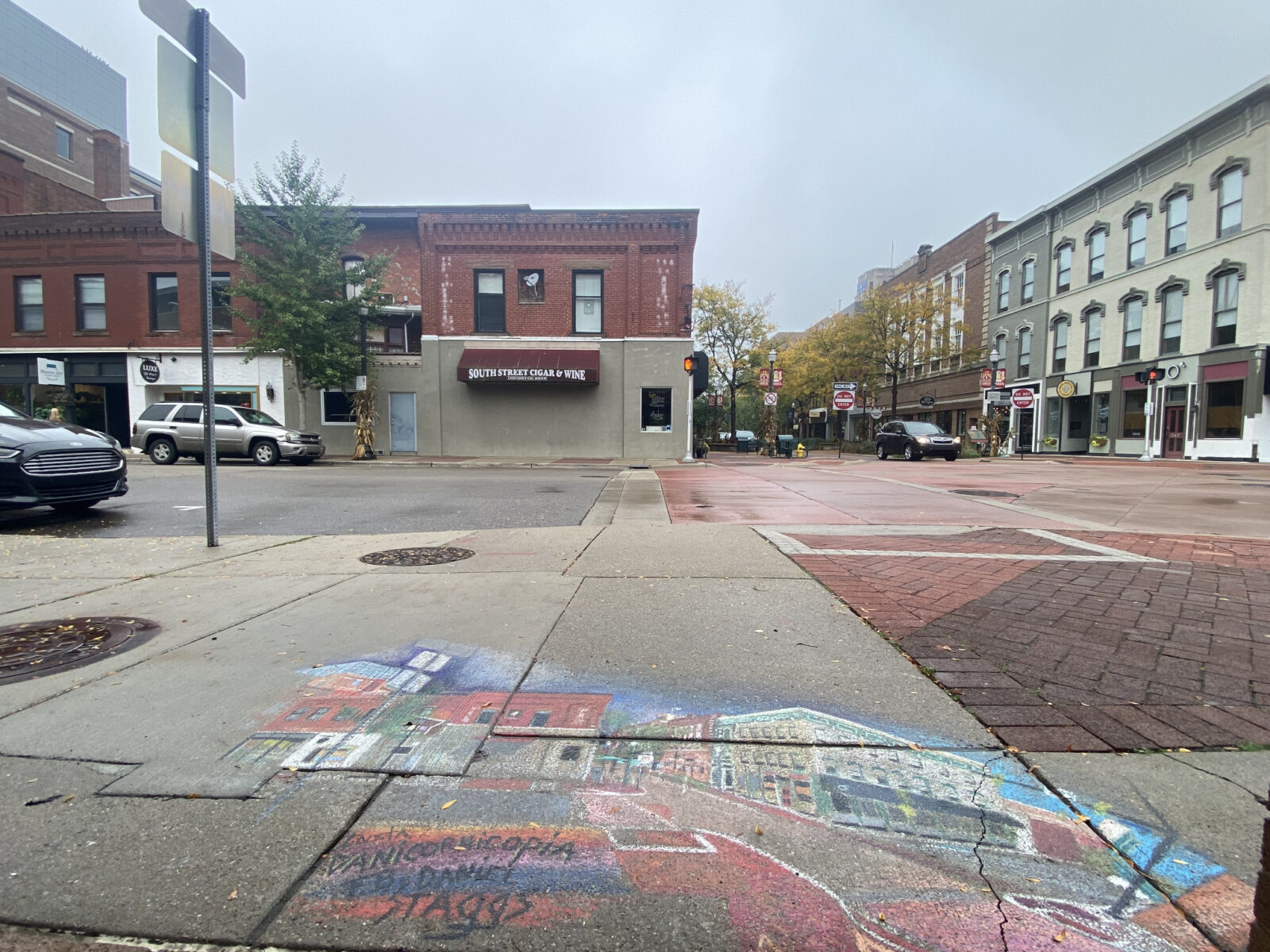 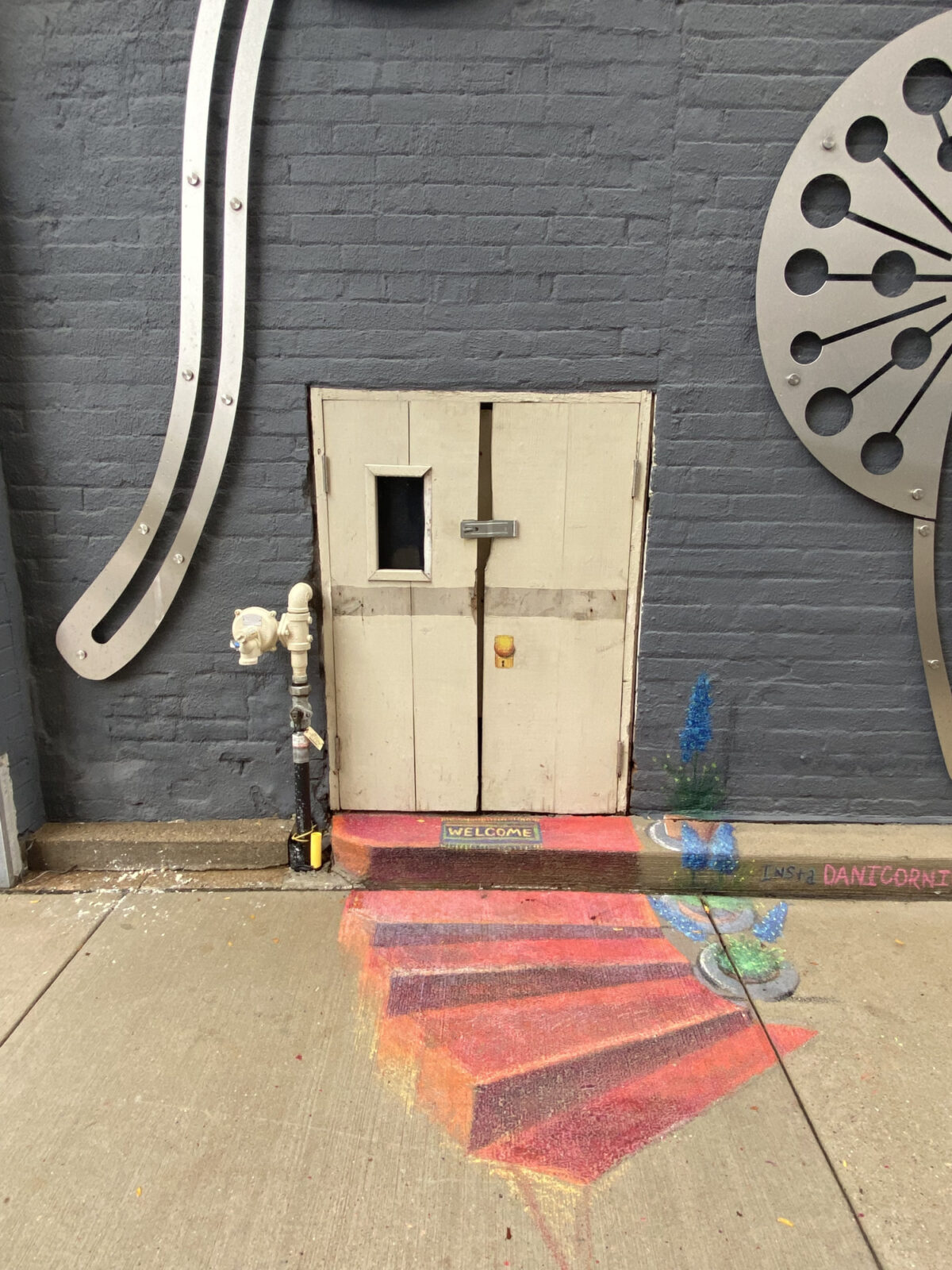 Dan Staggs puts crayon to pavement in these temporary street sketches that are intended to fade away in downtown Kalamazoo. // Chris Killian, NowKalamazoo

Using simple crayons, Staggs, 35, draws intricate cityscapes onto sidewalks around downtown. One drawing takes about two to three days to complete, and he’s created a half dozen of them so far. You can find them on the corner of Burdick and South streets, in Farmer’s Alley, and near the corner of Burdick Street and West Michigan Avenue, among other places.

“I just hope something cool comes out of my head,” he said. “The street art thing keeps my hands busy. I always need to be doing something. The moment you stop doing art as an artist is when you start dying.”

It’s become pretty common for him to see people or families appreciating his drawings, or to get a thumbs-up from motorists passing him as he works. A few times, he’s been approached by people who wanted to hand him money for his efforts. He always refused, he said.

“There’s been a few times when I saw someone taking pictures of one of my drawings and I asked them, ‘Hey, wanna take a picture of the artist?’” he said.

Besides his tattooing and this street art project, he’s also a prolific painter, mostly portraits. He’s sold them as far away as Beijing, China. You can find his art on his Instagram page — @danicornicopia.

Growing up in the small town of Paoli, northwest of Louisville, Staggs had the same art teacher from sixth grade through high school. That teacher insisted that he learn the fundamentals of drawing, telling Staggs to put down his ruler and use his thumb instead to get perspective on drawings he would work on.

He left Paoli after high school, spending two years in the Army Reserves before coming to Big Rapids, Mich. And one day, he hitchhiked to Kalamazoo.

“I was like, ‘wow, I really like it here,’” he said. “The arts community in this town is amazing.” 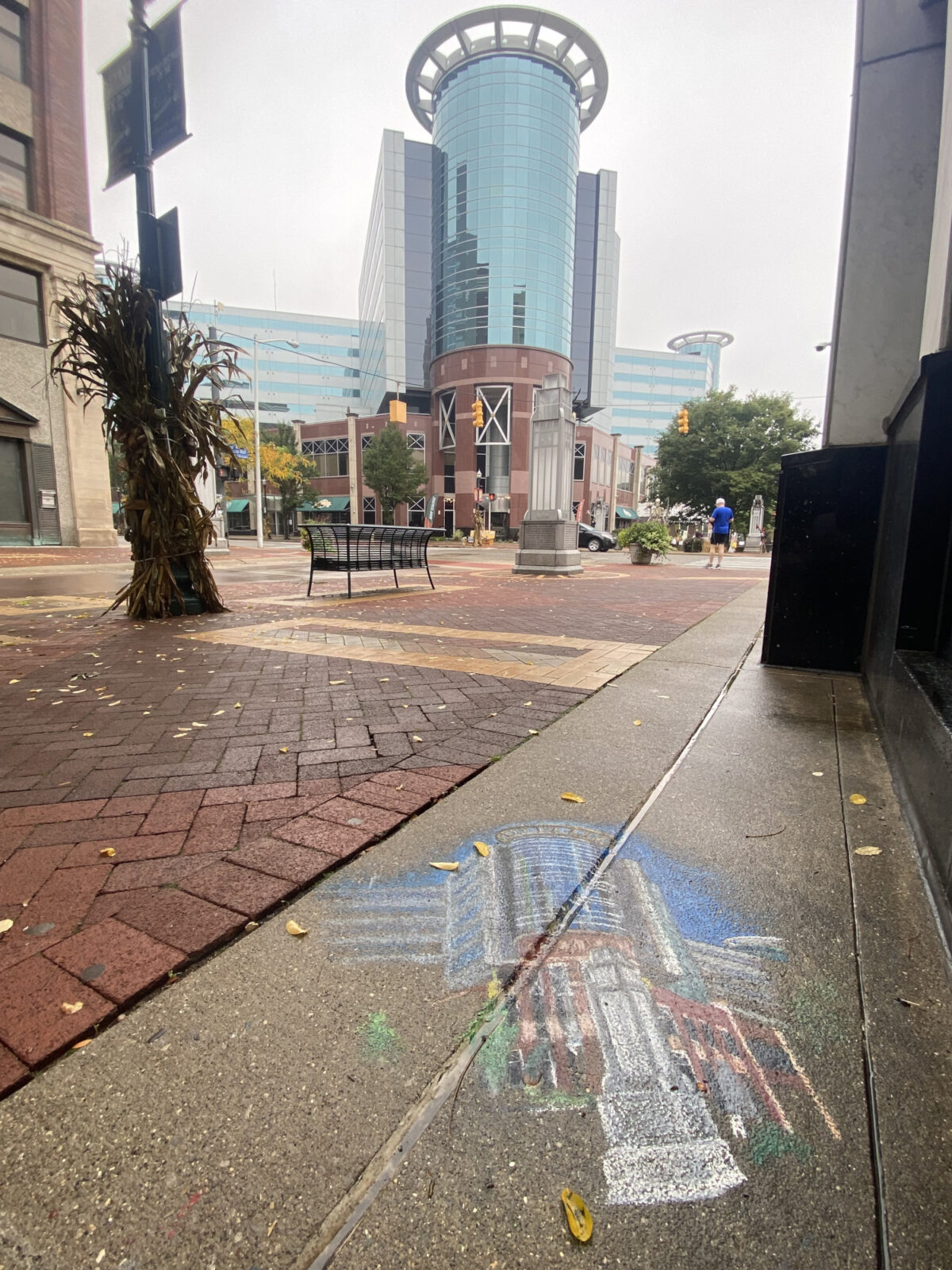 Walking downtown one recent Sunday afternoon, Staggs saw a young family taking in his drawing of the Radisson Hotel along the north side of the Kalamazoo Mall, the father crouching down to get a close-up picture. Staggs introduced himself.

“You drew this?” the man asked him, sounding surprised.

“Thank you so much for doing this,” the man said. “It’s really, really good. It really adds something cool to the downtown.”

Staggs walked back to his car, smiling.