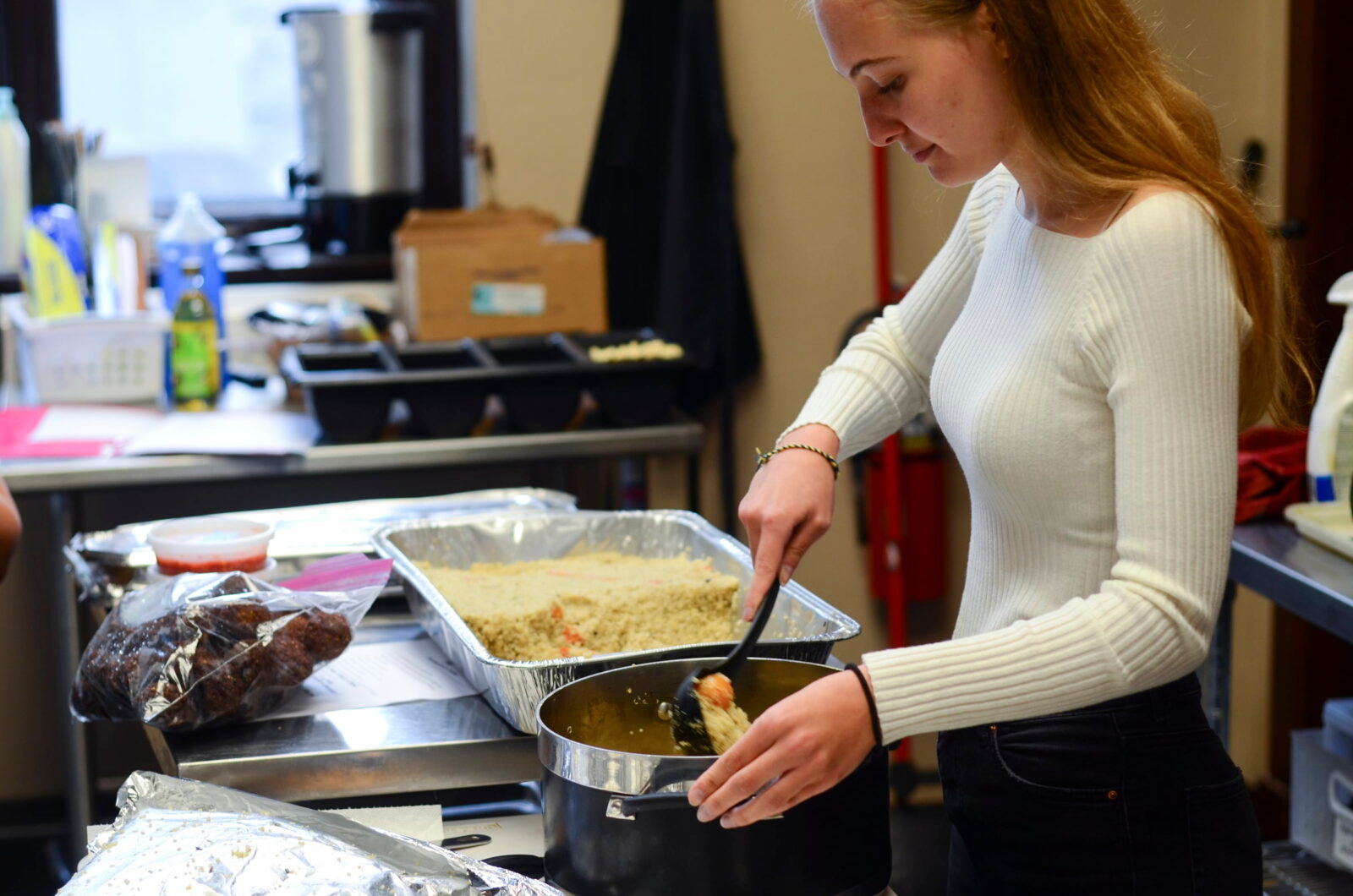 Wisconsin Watch’s ‘Beyond Hunger’ series examines food insecurity in America’s dairyland. Wisconsin Watch is a nonprofit newsroom that focuses on government integrity and quality of life issues. Sign up for our newsletter for more stories straight to your inbox and donate to support our fact-checked journalism.

At each stop, Barlin is met by kitchen staff who present her with various leftover foods, from sweet potatoes to breakfast omelets. These foods, which would have otherwise been thrown away, will be redistributed to students at no cost. 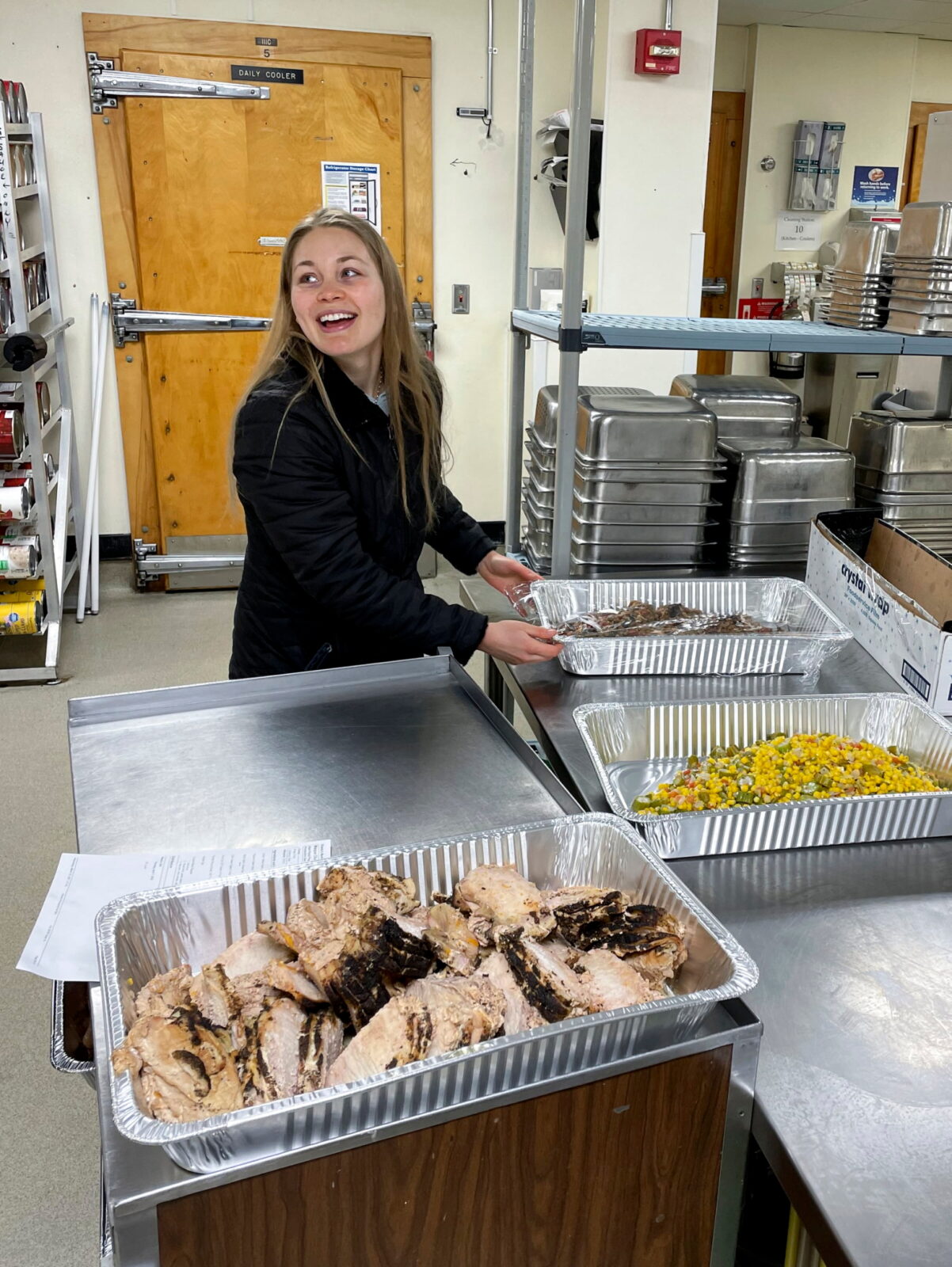 Morgan Barlin of the University of Wisconsin-Madison Food Recovery Network branch collects leftover food during the spring 2022 semester from a dining hall on campus. The food is served at community dinners at no cost. // Charlie Hildebrand / Wisconsin Watch

At the end of her route, Barlin records the weight of each donation. Her calculations show that on this day, she saved 271 pounds of food from ending up in the landfill. Barlin’s organization, the Food Recovery Network at the UW-Madison, uses the recovered food to provide free community meals.

The state Department of Natural Resources’ 2020-21 waste characterization study estimates that 854,000 tons of food were thrown away in Wisconsin last year; over 70% was still edible, which DNR calls “wasted food.” While 1.7 billion pounds of edible food ended up in the garbage in Wisconsin, 1 in 11 people across the state faced hunger.

Groups across the state have searched for alternatives to get food that would be wasted to people in need.

“(The Food Recovery Network) addresses both food waste and food insecurity at the same time because they’re paradoxical problems,” said Barlin, who graduated in May. “We shouldn’t be throwing away food at the same time that people in our community are also going hungry, and so it seems like the most practical and easy way to kind of ameliorate different issues in our food system.”

But redistributing restaurant and grocery food that has not yet spoiled is controversial within the charitable food assistance world — and difficult to accomplish under existing food-handling standards.

Beyond efforts on the UW-Madison campus, other programs in Wisconsin intercept still-edible food from grocery and convenience stores and restaurants that would normally be heading to the dumpster. In Madison, The River Food Pantry operates a food recovery program that collects food from more than 100 stores around Dane County.

“There’s so much food that is thrown away every single day,” said Helen Osborn-Senatus, director of operations at The River. “If you’re in the grocery store and you see that dollar off coupon, if that’s not picked up that day, it’s gonna get tossed.”

In 2021, about 40% of the 3.6 million pounds of food served by The River came from this recovery program, she said.

“This is quality food that’s safe to eat, but it’s past the (expiration) date, and that’s the only reason it’s being thrown away,” Osborn-Senatus said.

But Osborn-Senatus’ perspective on the value of food recovery is not universally shared. Sherrie Tussler, the executive director of the Hunger Task Force of Milwaukee, says her agency refuses to redistribute such food. 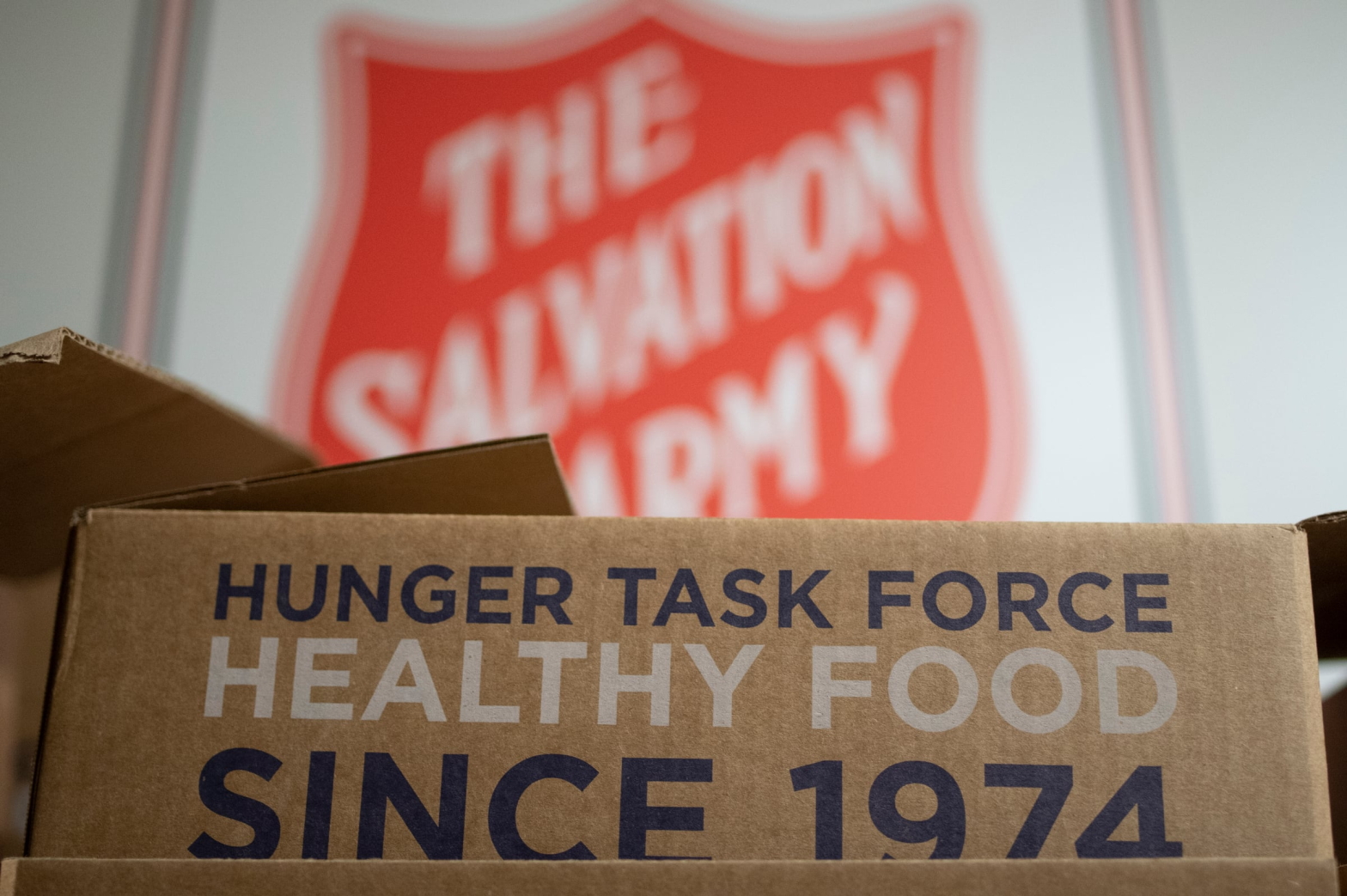 The Milwaukee-based Hunger Task Force is one of the primary contributors to the 60th Street Salvation Army food pantry. The Hunger Task Force does not distribute food recovered from restaurants or grocery stores. Executive Director Sherrie Tussler calls it a matter of “dignity” for the clients. Photo taken July 13, 2021. // Isaac Wasserman / Wisconsin Watch

“Our organization does not accept donated food from grocery stores or food that would be otherwise wasted,” Tussler said. “Our organization has a value of dignity. We will not pass through our food pantry network any food that we would not personally give to our best friend.”

Tussler suspects there are other motivations for grocery stores offloading their food to these recovery programs.

“There’s this secret in the food bank world that began with Second Harvest, and they’re sourcing their food from grocery stores,” Tussler said. “Grocery stores then don’t have to pay dumpster fees… (They) can get a tax write off for donating food — but what is the quality of that food?”

Waste a matter of taste

Brandon Scholz, the CEO and president of the Wisconsin Grocers Association, acknowledges such efforts do cut dumpster fees, but he says that isn’t the only goal.

“When you have to put (food) in the dumpster, you are wasting that money — which you don’t want to do,” Scholz said. “The last thing (grocers) would do, (after) they have exhausted all other options, is throw it away.”

One of these options includes making banana bread with bananas that are turning brown. Otherwise food can be donated to local pantries, he said.

Ian Steele, the food resources manager at Second Harvest Foodbank of Southern Wisconsin, says his organization takes precautions to ensure donations are safe to distribute. Second Harvest checks the temperature of food to ensure there are no items in the “temperature danger zone.” The Foodbank also checks for potential cross-contamination between raw and ready-to-eat items.

Left: Brandon Wolf, a student volunteer with the Food Recovery Network, prepares a dish at The Crossing Campus Ministry on Sept. 27, 2022, in Madison, Wis. — Top right: Julia Zhang, right, grabs a portion to go after volunteering to set up the event. — Bottom right: The Food Recovery Network sources leftover food from University of Wisconsin-Madison dining halls, which would have been thrown away, to provide free meals to community members. // Joey Prestley / Wisconsin Watch

Steele notes that, aside from baby food, the U.S. Department of Agriculture does not regulate food items’ code dates, which include consume-by, sell-by and freeze-by dates, among other phrases.

“Basically, what this means is, a portion of the food we receive in via donation and distribute out is in fact past (its) listed code date. (But) this does not impact the safety of the food being distributed,” Steele said.

Scholz explains these dates are “more of a guideline than a requirement,” adding, “What happens if you eat a product with a sell-by date of April 7th on April 8th? Really nothing.”

Grocers are more motivated to keep food fresh to satisfy customer demand rather than because of any health code requirement, he said. 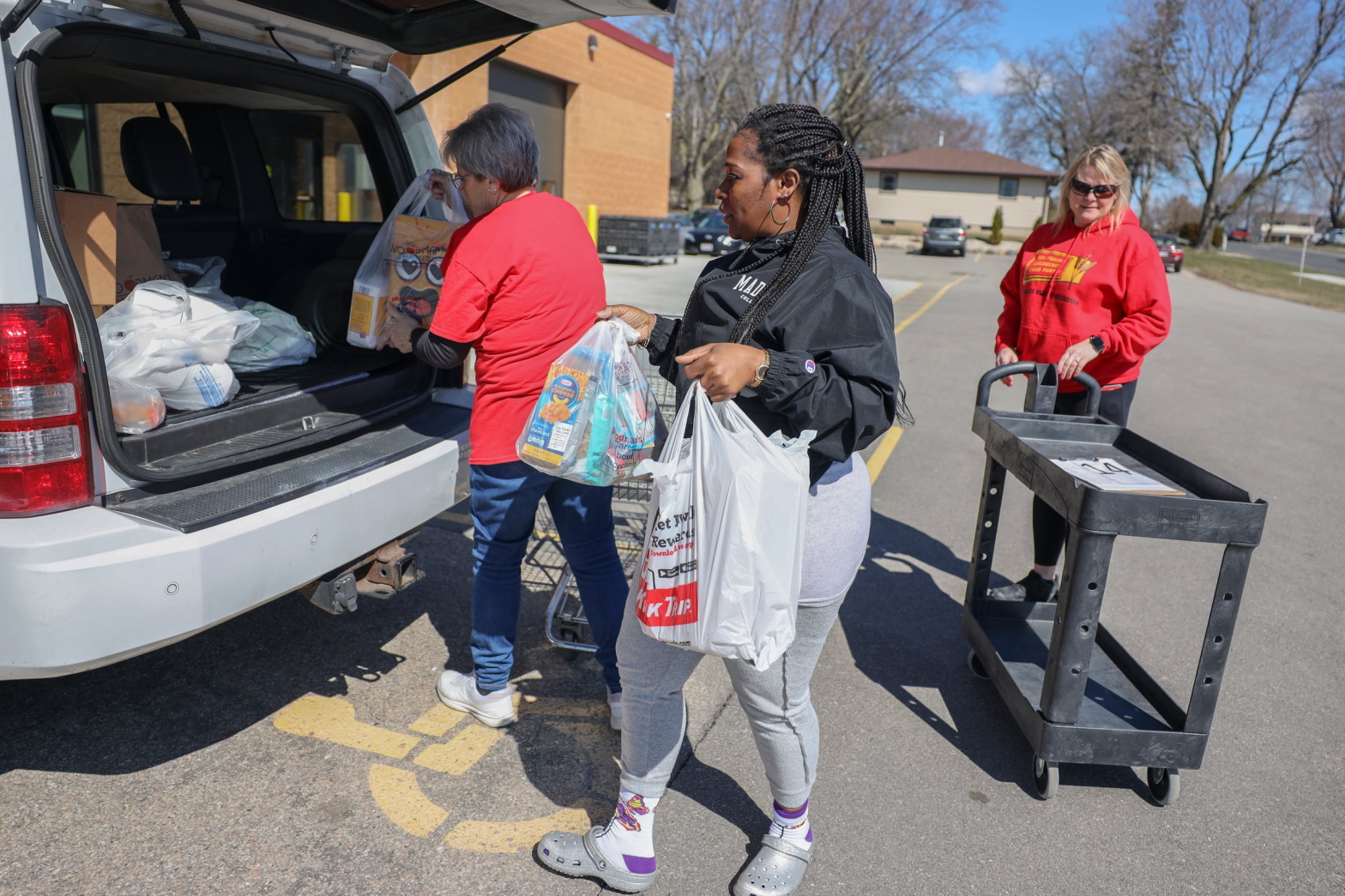 “There is not necessarily a specific law that says you have to get rid of lettuce that looks brown,” Scholz said. “This is a highly competitive business, so you don’t want to have crummy looking produce, because if your competitors have better looking stuff, then your customers are going there.”

On a $100 grocery sale, after various expenses, a grocer is only left with just 80 cents in profit — a margin of less than 1%, Scholz said.

“If a grocery store is throwing away food, it’s probably for a reason,” he said. “There’s probably some foolish retailer out there that does (throw away food for no reason), but I can assure you that there isn’t one in Wisconsin.”

Restaurants must adhere to health codes that sometimes prompt them to discard edible food.

Food must be kept at certain temperatures, says Susan Quam, executive vice president of the Wisconsin Restaurant Association. If food is continuously kept within the required temperature range, it can be re-served and not wasted, she says.

But, “If it’s something that is supposed to be kept cold, and was kept at room temperature, then you are not able to keep that product — you must dispose of it within four hours,” she said.

Restaurants are under the same pressure as grocery stores. Quam says profit margins in the industry are low, and restaurants are incentivized to reduce food waste since they are losing money for each dish that is discarded. But safety is the top priority.

“Food safety plays a big factor in anything a restaurant does,” she said. “We protect public health first and foremost. Ideally we have (restaurant) operators not doing anything that produces waste.”

‘Harder to throw out that meal’

Beyond waste produced at grocery stores and restaurants, Barlin says the majority of food waste is generated by individuals. According to the USDA, 31% of the edible food supply in the United States was not eaten in 2010 — with consumers responsible for more lost food than retailers.

That year, consumers threw away 90 billion pounds of food; Barlin notes this presents a good opportunity for people to learn how to reduce food waste at home, with campaigns dedicated to repurposing food components often thought of as inedible, such as broccoli stems. 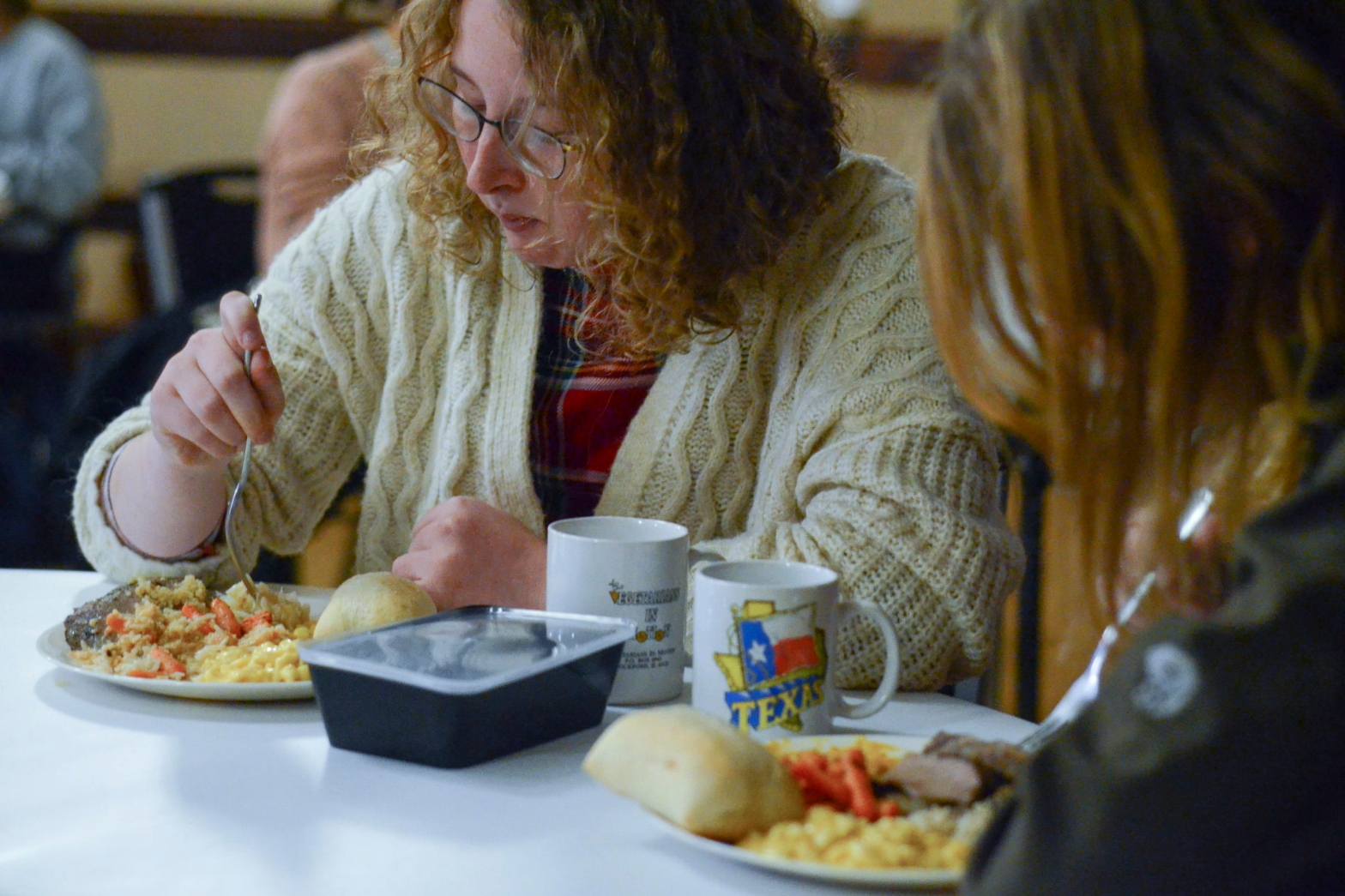 Thea Sutter, left, and her twin sister Morgan enjoy a plate at the Food Recovery Network’s Tuesday community meal on Sept. 27, 2022 in Madison, Wis. The Food Recovery Network sources leftover food from University of Wisconsin-Madison dining halls, which would have been thrown away, to provide free meals to community members. Thea, who previously worked at a campus dining hall, said back then, “They threw away everything! It was crazy!” adding, “I’m glad we have this. It’s good food. They have mac and cheese — everyone likes the mac and cheese.” // Joey Prestley / Wisconsin Watch

The task can be as simple as making a grocery list to avoid overbuying, or educating themselves on unregulated “best by” dates to avoid throwing away food while it’s still edible.

“If you’re more attuned to how far your food has traveled to get to your plate or who has labored to get that food to your plate,” Barlin said, “it’s much harder to throw out that meal.”

Charlie Hildebrand and Riley Sumner are student reporters who took part in an investigative reporting class at the University of Wisconsin-Madison School of Journalism and Mass Communication under the direction of Dee J. Hall, Wisconsin Watch’s managing editor.

The nonprofit Wisconsin Watch collaborates with WPR, PBS Wisconsin, other news media and the University of Wisconsin-Madison School of Journalism and Mass Communication. All works created, published, posted or disseminated by Wisconsin Watch do not necessarily reflect the views or opinions of UW-Madison or any of its affiliates.