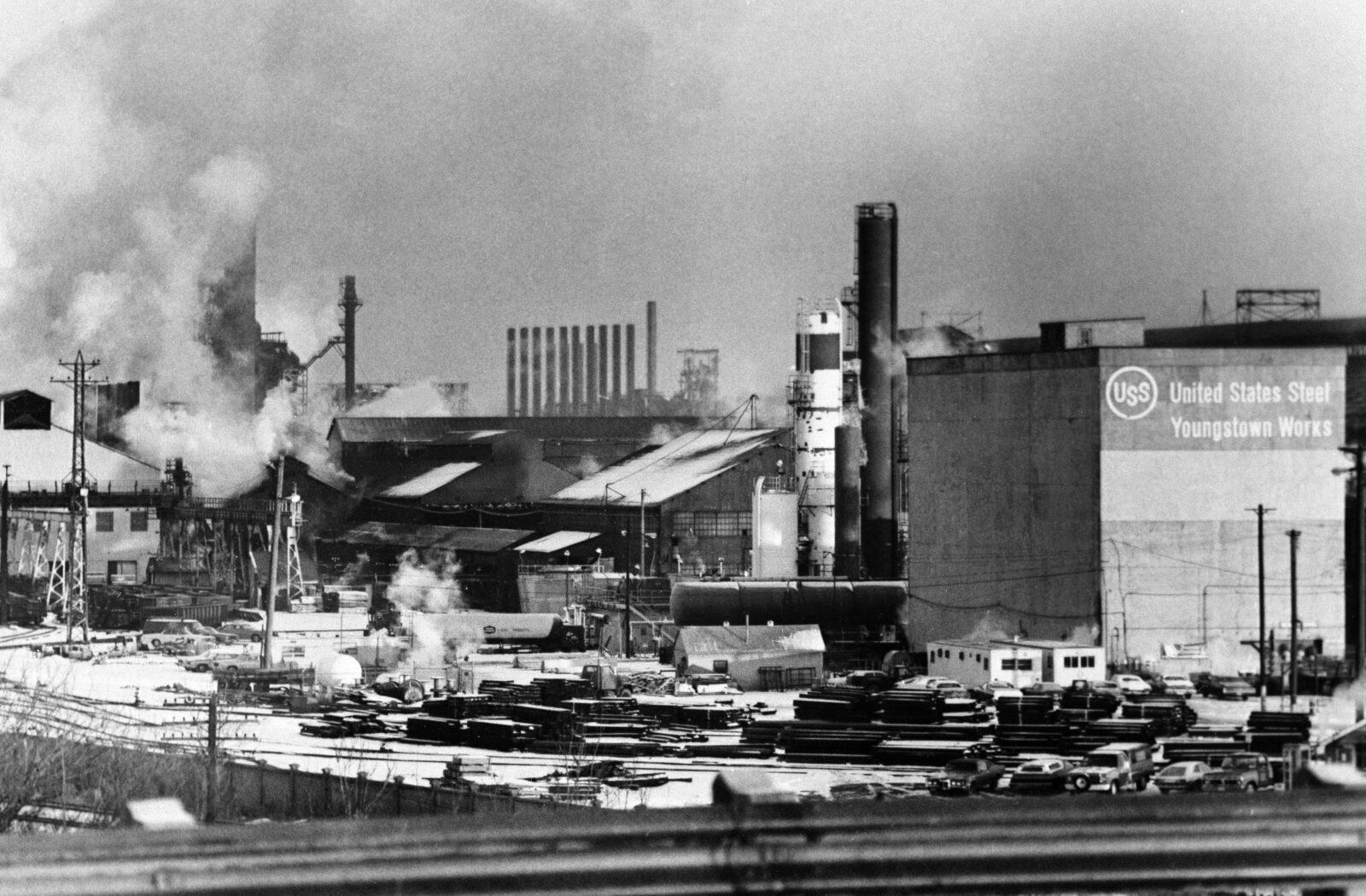 Last June, amid great fanfare, a product was introduced that was supposed to get the Mahoning Valley back on the road.

The Endurance, an electric pickup truck, was unveiled at the Lordstown Motors factory, located in a former GM plant in its namesake town in Trumbull County, Ohio. With an estimated 600 horsepower generated in part by small motors in each of the truck’s wheels, the Endurance was touted as the vanguard of electric vehicle technology. Goodyear signed on as part of a “strategic relationship,” and first overall draft pick Joe Burrow, who grew up in Athens and would play for the Bengals, was a “brand partner.”

“You’re going to make history right here at Lordstown Motors,” said former Vice President Mike Pence, who attended the event. “I believe it with all my heart.” 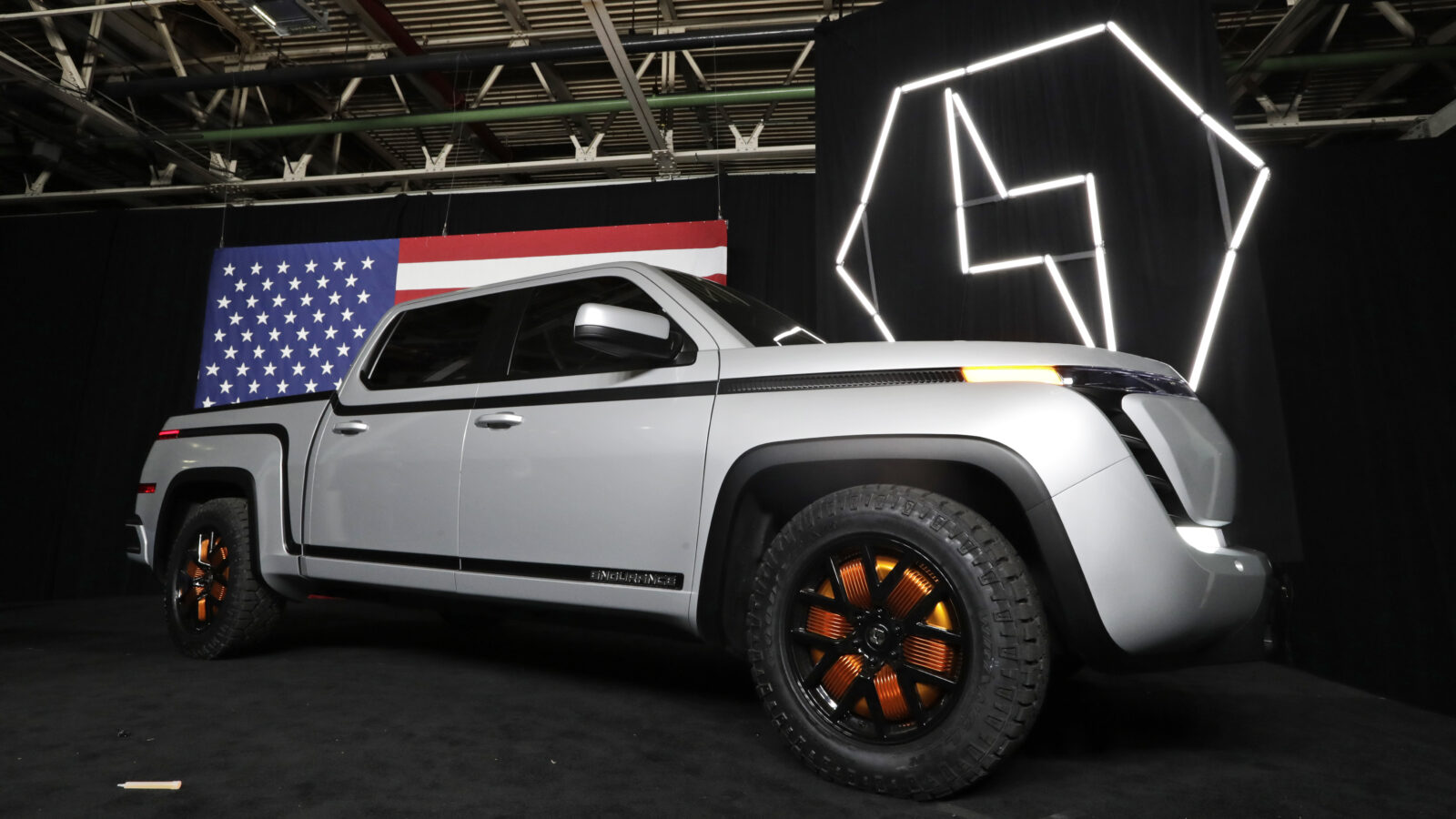 The news since has been anything but good. The truck was originally expected to start production that fall, but it, like its previously scheduled debut at the North American International Auto Show in Detroit, was postponed because of  COVID-19.

In January, a prototype truck caught fire on the road in Farmington Hills, Mich., where the company located its research and development factory. The following month, the U.S. Securities and Exchange Commission opened an inquiry into Lordstown Motors, specifically its alleged 100,000 pre-orders and the merger last fall that preceded the company’s initial public offering. In March, Hindenburg Research released a report that basically said Lordstown Motors was a house of cards, its thousands of pre-orders nonbinding, including one owner who made the orders from a P.O. Box and said that it was the start of a marketing relationship (and he had no intention of buying the vehicles).

Admittedly, Hindenburg is a short seller, meaning they benefit from a stock’s price going down — and nothing would make a stock price tank like a report of shady dealings and no real value (the stock peaked at $30.75 per share in February; now it’s traded at less than $10, and was recently downgraded by Goldman Sachs). But Lordstown Motors, whose leaders claim the company’s still on track to start making trucks this fall, is now the defendant in no fewer than five class-action lawsuits. And a recent highly-touted entrance into a Mexican endurance race ended with the company pulling out after completing just 40 of its 280 miles.

But Lordstown Motors is the latest player in what’s become an all-too-familiar script in the Mahoning Valley: A reputed visionary has a big, potentially market disruptive plan and the area, desperate to return to something even resembling its previous industrial might, is all too happy to buy in. They may throw in some tax breaks to sweeten the deal, but when the time comes, the reality falls far short of the vision.

“There’s no strategy on how to rebuild,” says Staughton Lynd, a local lawyer and activist. “People are not only used to layoffs and shutdowns, they are used to phony baloney.”

The great line of demarcation in the history of the Mahoning Valley came on Sept. 19, 1977. That day, still known locally as “Black Monday,” Youngstown Sheet & Tube, the largest of the local steel producers, announced it would close its Campbell mill at the end of the week. 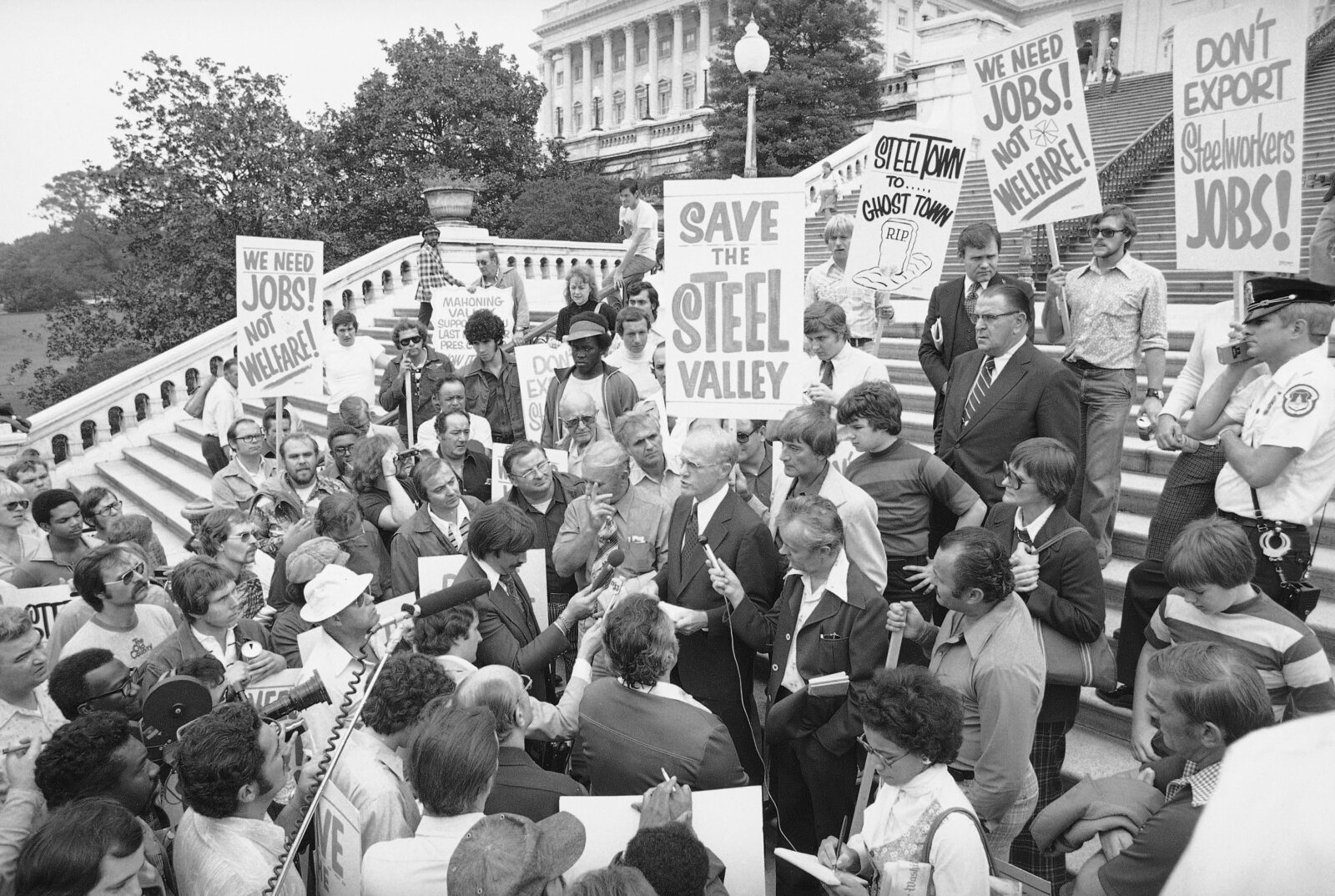 Sen. John Glenn, D-Ohio, center, speaks to a group of Youngstown Sheet and Tube Co. workers on the steps of the Capitol, Friday, Sept. 23, 1977, Washington, D.C. The group is protesting the layoff of some 5,000 workers. (AP Photo/Harvey Georges)

The region was thrown into disarray as 5,000 jobs effectively vanished. One by one, all the other steel mills in the area tapped out, with a ripple effect through the economy that led to 50,000 jobs lost in a five-year span.

The ending would have come eventually, says Bill Lawson, director of the Mahoning Valley Historical Society. The mills dated to the turn of the century, using antiquated open hearth technology. And many other steel companies were changing their business strategy (U.S. Steel was diversifying, and even changed its name in 1986 to USX to reflect it wasn’t a steel company) and closing mills nationwide.

But the speed of the change, Lawson said, was too much for people to fully comprehend in real time, and deepened the cynicism that had always pervaded the region, known in part for its organized crime presence and political corruption. During a mob war in the 1960s known for its car bombings, there was a sardonic joke: For $2, barbers in Youngstown would cut your hair. For three, they’d start your car for you.

That cynicism ossified throughout the 1980s and 1990s as economic revitalization efforts tried and failed with a number of big-ticket manufacturing and industrial projects that never happened. (Ironically, the only growth industry in Youngstown has been prisons. The city is home to two state facilities, as well as a private prison — which seems to have gotten a reprieve after President Joe Biden’s order to end the use of private prisons for federal contracts.)

An airplane company, Commuter Aircraft Corp., came to the Youngstown area in the early 1980s with plans to build a 50-seat turboprop plane for commuter airlines. A factory was built on the grounds of the Youngstown-Warren Regional Airport in Vienna. A $30 million federal loan was guaranteed. Not one plane was made.

In 1982, the City of Youngstown sold its old municipal airport on the east side to a British airship company for a dollar with the promise of a new plant to build dirigibles. That, too, never got off the ground.

“Some of the ideas were just bizarre,” Lawson says. “And they reflected a certain expediency by public officials, who were trying to fill this huge void in their budgets.” 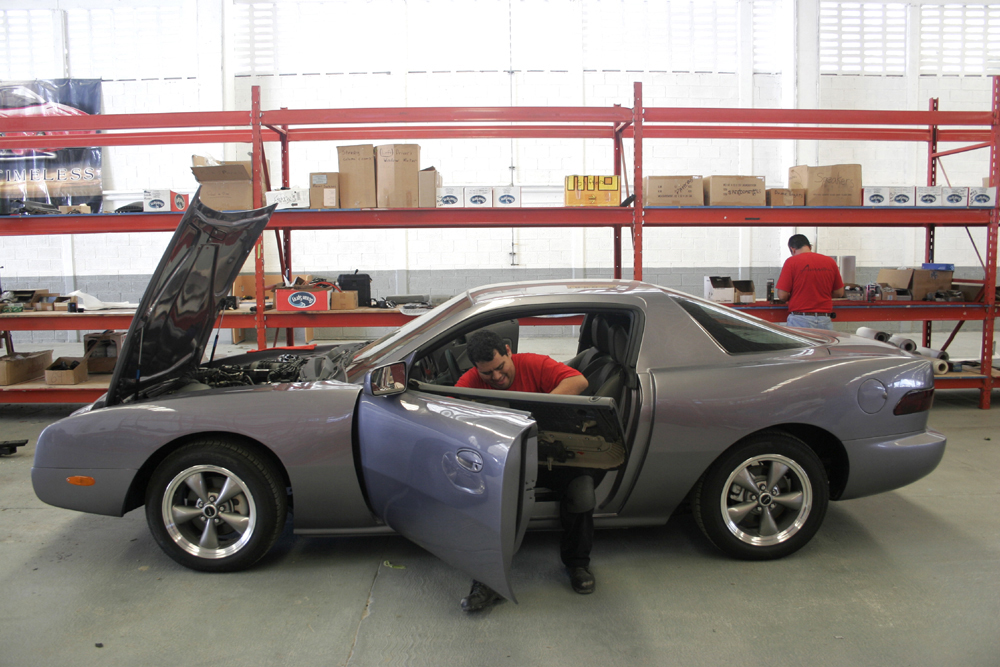 Avanti models are assembled at the new Avanti Motor Corporation production plant in Cancun, Mexico on Monday Oct. 23, 2006. The Avanti, a sports car introduced by Studebaker in 1962, was the last car produced by the Studebaker Company, and since then sports car enthusiasts have adored the Avanti, a stylish coupe that has always turned heads, rarely turned a profit yet refuses to die. The new production plant, which will replace the one in Villa Rica, Ga., plans to produce about 400 cars a year.(AP Photo/Israel Leal)

In the late 1980s, plans were made for a different auto company in an industrial park that was a former site of a steel mill on Youngstown’s East Side. One of Studebaker’s last products was the Avanti, a fiberglass personal luxury coupe designed by Raymond Loewy. The car lived on, hand-built in small numbers in Studebaker’s old  Indiana factory.

Plans were made to move to a larger factory, and Youngstown was willing to sweeten the deal with state and local loans. J.J. Cafaro, whose father Bill had become a millionaire in real estate development, partnered with owner Michael Kelly. All told, 407 cars were built in Youngstown before the company closed up shop.

John Russo, a Youngstown State University professor that helped start the school’s Center for Working Class Studies, notes that there’s a certain psychological fallout with those types of ideas — many, like Lordstown Motors, sold by out-of-town investors.

“There’s a type of cover with all these ideas to give people hope,” Russo says, “and then when these things don’t pan out, there’s a politics of resentment.”

And occasionally, someone comes along to play to those feelings of resentment — such as Donald Trump. Or his forbear, another tough talker with bad hair, Jim Traficant, who for many years seemed like the only friend in high places the Mahoning Valley had.

“There’s a loss of belief in institutions that’s lingered,” Russo said. “The mob’s power came from the idea that you couldn’t rely on anyone. That’s why someone like Traficant could be so successful. He played on that resentment.”

Traficant’s devotion to the area he served was well-known, but his prominence was not one of the area’s selling points. And sometimes, there were locally-grown businessmen who thought they could be the transformation figure the area needed – but ended up becoming just as notorious as Traficant. 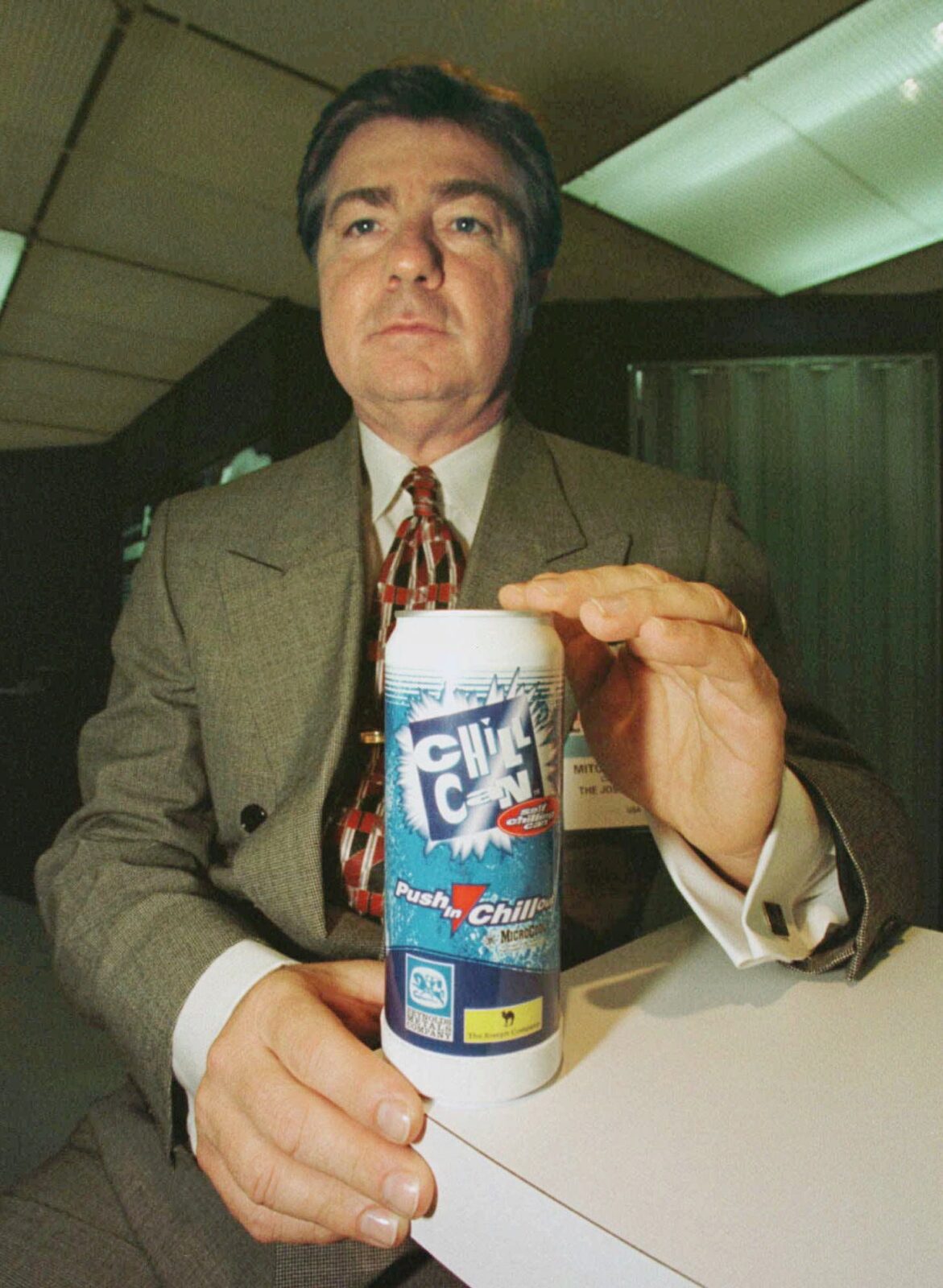 Mitchell Joseph, chairman and C.E.O. of The Joseph Company, displays their newly launched Chill-Can during an international can-making exhibition in Singapore on June 19, 1997. The Laguna Niguel, California-based company has developed the self-chilling can using an innovative "free evaporation" technology, though the British government announced it would propose a Europe-wide ban on the product due to its use of hydrofluorocarbons, which they claim are ecologically harmful. (AP Photo/Jonathan Drake)

In the late 1980s, Mickey Monus’ Phar-Mor chain had Sam Walton shaking in his boots. The “power-buying” discount drug and grocery chain was expanding rapidly. Monus was able to buy into Major League Baseball as the first owner of the expansion Colorado Rockies and started the World Basketball League.

But all that glittered most certainly was not gold. A full decade before Enron, Phar-Mor was using accounting tricks to make it look like they were doing more business and making more money than, uh, reality dictated. Monus and CFO Pat Finn ultimately went to prison for fraud, and the chain went bankrupt, emerged from it and went bankrupt again before its ultimate liquidation.

The Mahoning Valley’s industrial fortunes rose thanks in no small part to coal and iron deposits around the area. And in the early 2000s, when natural gas producers started fracking to get natural gas from the Marcellus shale, the Mahoning Valley saw some benefit. Environmental concerns were shouted down, Russo said, because fracking was seen as the industry that would bring the Valley back. The biggest thing it brought was earthquakes, linked to injection wells used to dispose of the wastewater.

Then, in 2016, ground was broken on a new project that was touted as revolutionizing the beverage industry. Chill-Can, which would make a self-chilling beverage can, was coming to Youngstown. It was viewed as a homecoming for Mitchell Joseph, a Youngstown State University alumni whose grandfather started a pop bottling company in the same neighborhood nearly a century earlier.

The complex would create more than 200 jobs, and have the capacity of making potentially a billion self-chilling cans a year.

Residents were bought out. Land was cleared. Tax breaks were given. More than four years later, not only have no cans been manufactured, but Mayor Tito Brown ordered the company to fulfill its obligations or repay grants, money spent by the city to buy property for the facility and tax abatements. (Chill-can has filed its own lawsuit, alleging it doesn’t have to repay the money.)

“I don’t think Mickey Monus, J.J. Cafaro and Mitchell Joseph were trying to put one over on anyone,” Lawson says. “They tried to make things better. They just couldn’t sustain things.”

But in one of the poorest cities in the United States, with the first school district in Ohio taken over by the state, good intentions can only go so far.

“There’s this feeling of, ‘What do we have to do?’” Lawson says. “We’ve done what we could, and it seemed like the cards were all stacked against us.

“We seem to lead the world in the painful postindustrial process. We’d like to lead in something else.” 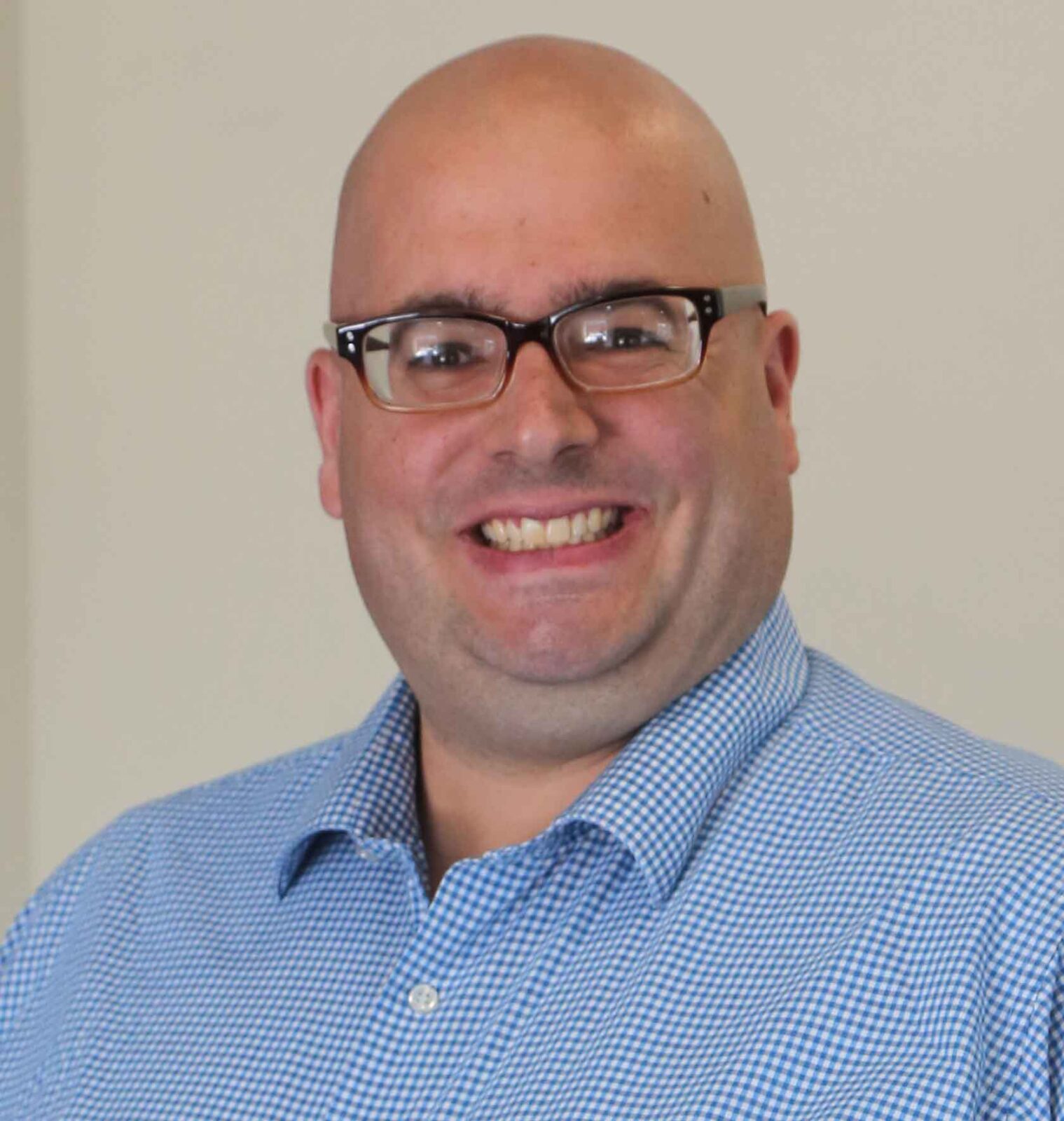 Vince Guerrieri is a Youngstown native and journalist who’s worked for newspapers in the Mahoning Valley, Cleveland area, Pittsburgh, and Northwest Ohio. He’s the author of one sports history book and co-author of another, and his byline has appeared in publications as varied as Popular Mechanics, POLITICO, Smithsonian, Ohio Magazine, CityLab, and Deadspin. He lives near Cleveland.