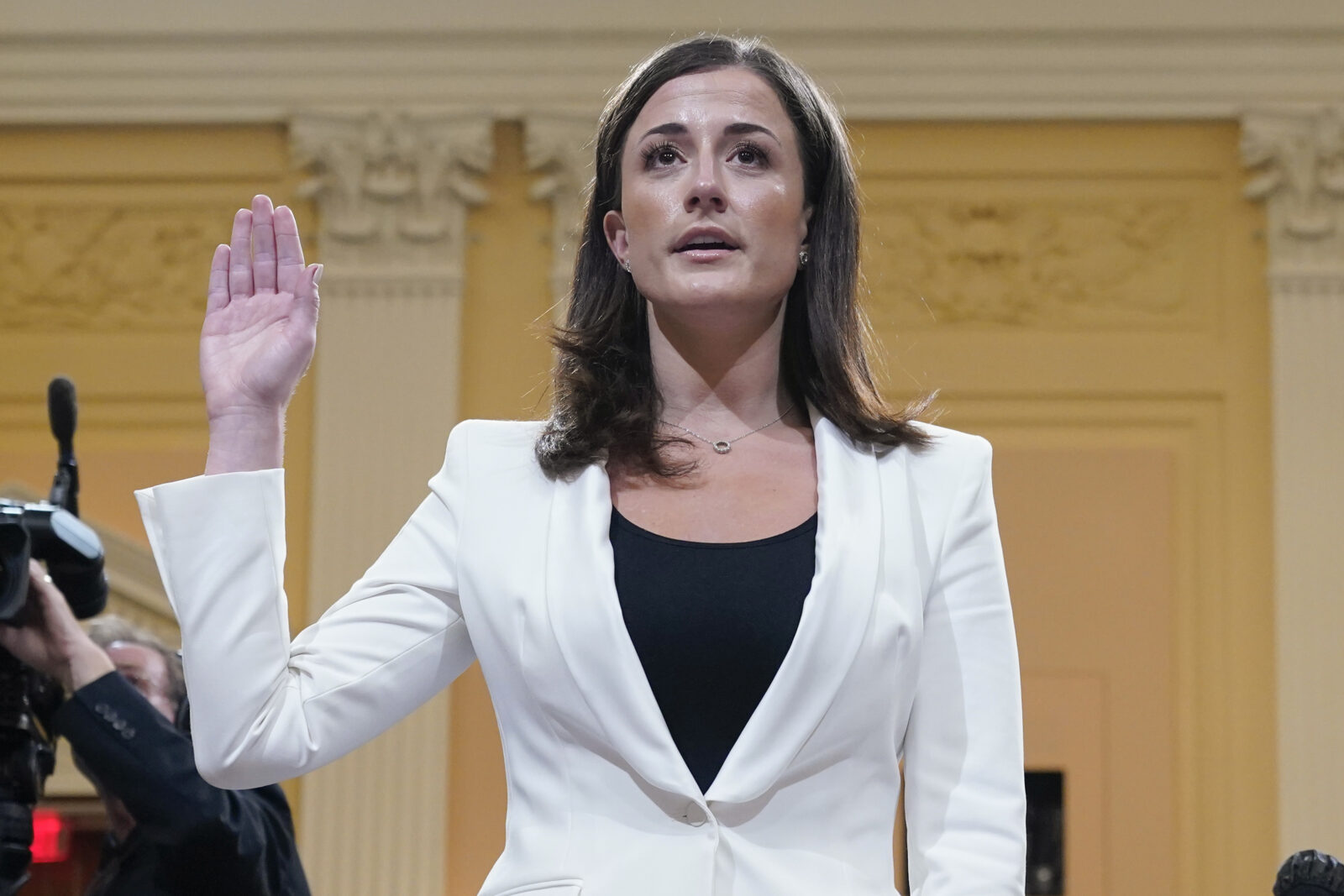 Cassidy Hutchinson, a former aide to the White House chief of staff, testified during the Jan. 6 Committee hearings.

Cassidy Hutchinson, a former aide to the White House chief of staff, recounted in detail efforts by outgoing President Donald Trump and her boss, Mark Meadows, to allow, and even foment, the violence that nearly toppled American democracy.

Her testimony came during the Jan. 6 Committee hearings.

The 25-year-old Hutchinson spoke of Trump and Meadow’s seeming lack of concern that supporters gathered for the president’s speech — a clarion call for people to march on the Capitol and disrupt the certification of Joe Biden’s electoral win — were brandishing weapons.

According to her recollections, and recordings played during the hearing of Washington law enforcement officials on the scene that day, there were Trump supporters in the capital on Jan. 6, 2021, carrying firearms, including AR-15s.

Both Trump and Meadows seemed unconcerned that an armed mob was preparing to storm the Capitol.

Among those arrested and subsequently sentenced for possessing weapons that day was Lonnie Coffman, a Vietnam veteran from Alabama, who was apprehended while possessing firearms and components needed to make Molotov cocktails.

Numerous others from Postindustrial America were also arrested for their role in the coup attempt and for breaching the capitol, including the-newly elected West Virginia Delegate Derrick Evans. He resigned just days after the incident and has since been sentenced to 90 days in jail.

That so many were carrying deadly weapons in close proximity didn’t seem to concern the president, Hutchinson noted.

In typical Trump fashion, she said the former president was exceedingly concerned with the optics of a crowd that didn’t meet his desires for a full house for the television cameras.

She had long been a supporter of the president, but testified that she’d witnessed some of Trump’s most abhorrent and unhinged behavior during her tenure at the White House, well before the days leading up to the Jan. 6 effort to thwart the certification of election results.

The president even wanted those carrying guns to circumvent the weapon-detecting magnetometers placed around the area where he spoke, according to testimony.

“I don’t f—ing care that they have weapons,” she recalled Trump saying that fateful day during his “Stop the Steal” rally. “They’re not here to hurt me. Take the f—ing mags away.”

Her boss, Meadows, she testified, also seemed unfazed by both the weapons in close proximity to the president and the danger they posed to lawmakers at the nearby Capitol, including Trump’s own vice president, Mike Pence.

“He [Meadows] almost had a lack of reaction. I remember him saying ‘all right,’ something to effect of, ‘how much longer does the president have left in his speech?’” Hutchinson said.

However, there were those concerned in the Trump administration that the president’s rhetoric was going to get someone hurt or killed that day.

Hutchinson testified that White House counsel Pat Cipollone told her that if Trump marched to the Capitol with the coup plotters that “We’re going to get charged with every crime imaginable if we make that movement happen.”

“Mark, something needs to be done, or the blood is going to be on your effing hands.”

Hutchinson has been roundly praised for testifying about the dangers to democracy faced that day. Her testimony also laid bare additional legal exposure Trump could face.

She had long been a supporter of the president, but testified that she’d witnessed some of Trump’s most abhorrent and unhinged behavior during her tenure at the White House, well before the days leading up to the Jan. 6 effort to thwart the certification of election results.

Watch the testimony from the Jan. 6 Select Committee by clicking here.

Postindustrial founder Carmen Gentile has worked for some of the world’s leading publications and news outlets including The New York Times, USA Today, CBS News and others. His book, “Blindsided by the Taliban,” documents his life as a war reporter and the aftermath of his brush with death after being shot with a rocket-propelled grenade in Afghanistan. He also is a board member of Industry’s Humanitarian Support Alliance. Reach him at carmen@postindustrial.com.