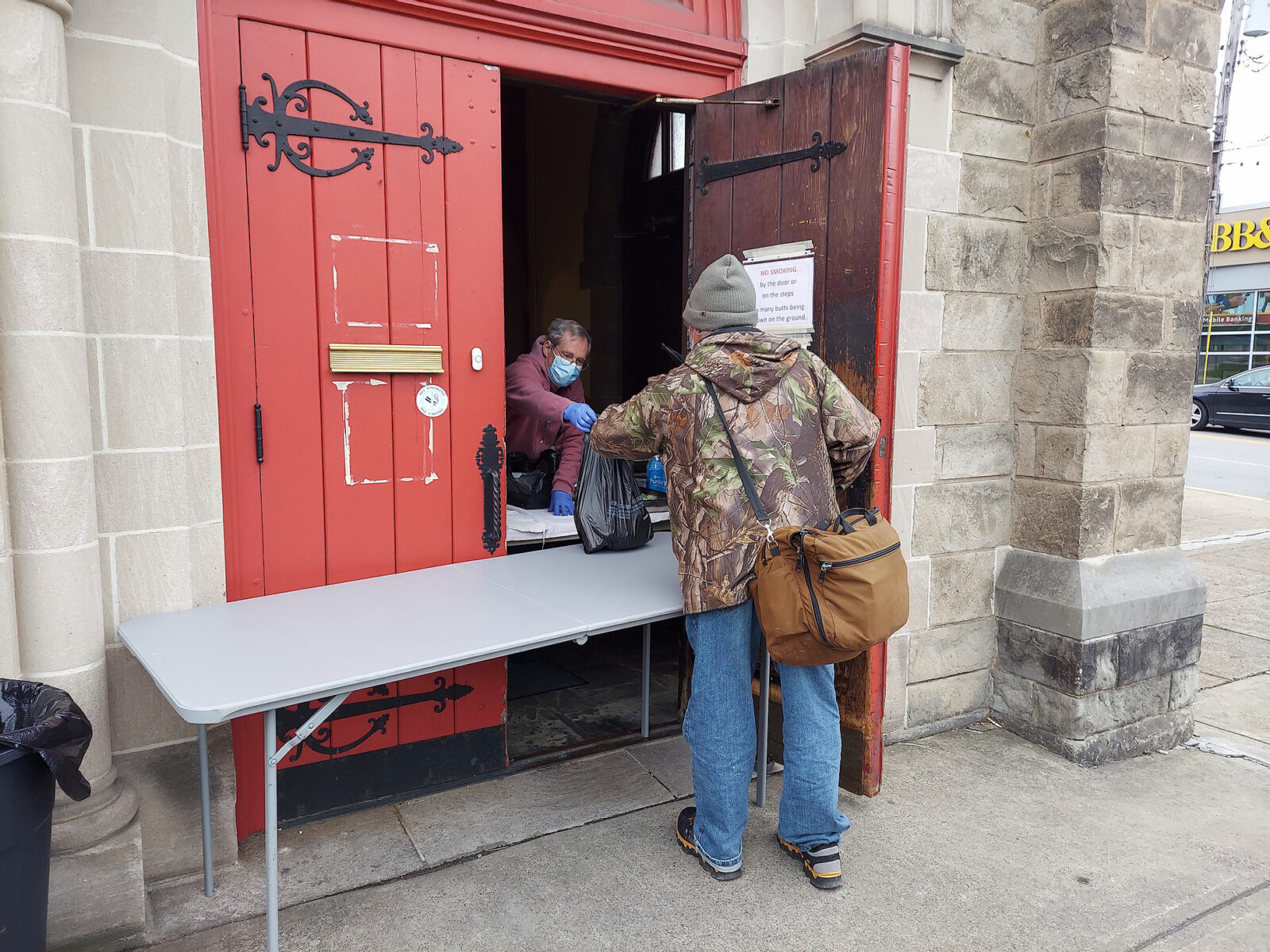 Richard Dumas hands a meal to a client.

MORGANTOWN, W.Va. — In West Virginia, a state with among the highest poverty rates in the nation, the hungry have always had few options.

With COVID-19 restrictions, those options are even more limited, making charities one of the few dependable sources of food.

Charities such as Community Kitchen, Inc. in Morgantown and CCAP Loaves and Fishes in Martinsburg have risen to a continuing challenge to serve communities without spreading the virus. This has meant changes in operations, procedures, and staffing to meet the unchanging need of feeding West Virginians.

This is the story of how these organizations stayed open when everything else was closed, and how they continue to serve their communities in the new normal.

Founded in 1984, Community Kitchen, Inc. is a non-denominational organization with a mission of providing a free nutritious meal “in a safe, clean, uplifting environment for the hungry in the community.”

Originally, the kitchen was part of Trinity Episcopal Church, but over time it became a community-based organization. Because it is still located in the church building, it is still answerable to church leadership regarding use of the facilities.

It remained open throughout the pandemic, but the operating costs have risen. The Community Kitchen received at least six emergency grants to keep operating during the pandemic. 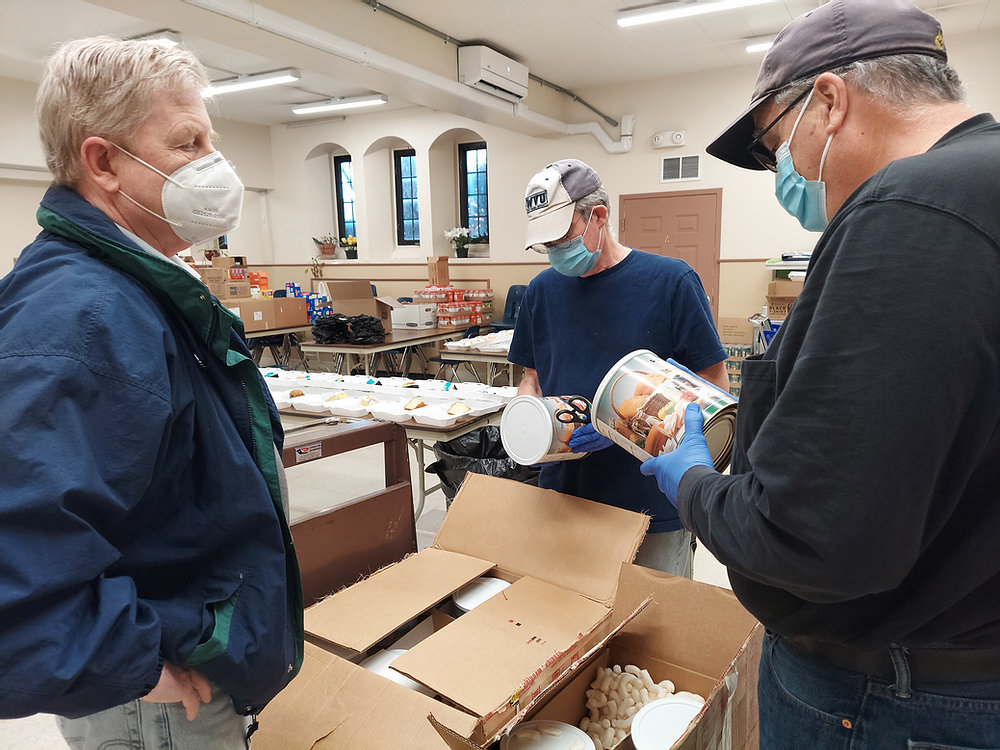 Volunteers Richard Dumas and Jeff Nieman examine boxes of donated food delivered to the Community Kitchen by supporter Russell Kincaid. The volunteers make sure the food is usable and then record it in the inventory.

Changes at the Kitchen

For the Morgantown Community Kitchen, COVID-19 has meant an overhaul of procedures.

The kitchen generally serves 70 to110 meals per day. Since 2020, the average meal number has dropped to closer to 80 meals per day at its highest.

The kitchen is staffed by volunteers, and it mostly runs on donations.

Meals now must be packaged in plastic foam “to-go” boxes, meaning that operations are more expensive and time-consuming.

“Before COVID, we would probably have six or seven volunteers, you know, prepping food, serving, manning the soup and salad stations,” said Richard Dumas, a Community Kitchen Board member.

In May they were down to three or four people, at the most, who are in the kitchen, preparing food and serving, he said. As of June, the kitchen can have all the volunteers they need.

But the largest impact on the kitchen is that its clients no longer can eat indoors. Since March 2020, the indoor dining area has been closed. Instead, clients must come to the door of the church.

For many, the Community Kitchen provides their only meal for that day.

“I just hate to see them sitting out there in the snow eating, or sitting in the rain,” volunteer Amy Wodzenski said. “But they do.”

The client number fluctuates from day to day, depending on the weather, the menu that day and whether any monetary assistance has come in recently.

“You never know exactly,” said Jeff Nieman, a volunteer. “You think it’s going to be a rainy day, you’re only going to have 50, and then if you end up having 70, you’re scrambling around at the end trying to get something else to fix.”

The volunteers lay out all the portions in advance, and put each part of the meal into the boxes. The meals generally consist of an entrée, a side, and a dessert.

Once this is done, the volunteers move the boxes to a table at the door of the church, where they can be served to anyone who asks for a meal.

“This is something I feel I can do.”

Bill Hagerty, the president of the Morgantown Community Kitchen board of directors, wishes that things could be different.

He had friendly relationships with many of the clients at the Community Kitchen before COVID-19.

Now, he struggles to remember names.

“This has separated us from them to such an extent, that today I ran into someone who I knew his name so well before and I still haven’t thought of it,” Hagerty said.

In spite of the distance, Hagerty tries to keep up his friendship with a client whose medical condition caused his hands to shake uncontrollably.

“We do special things for him, like fill his coffee mug and put it in his backpack for him,” Hagerty said. 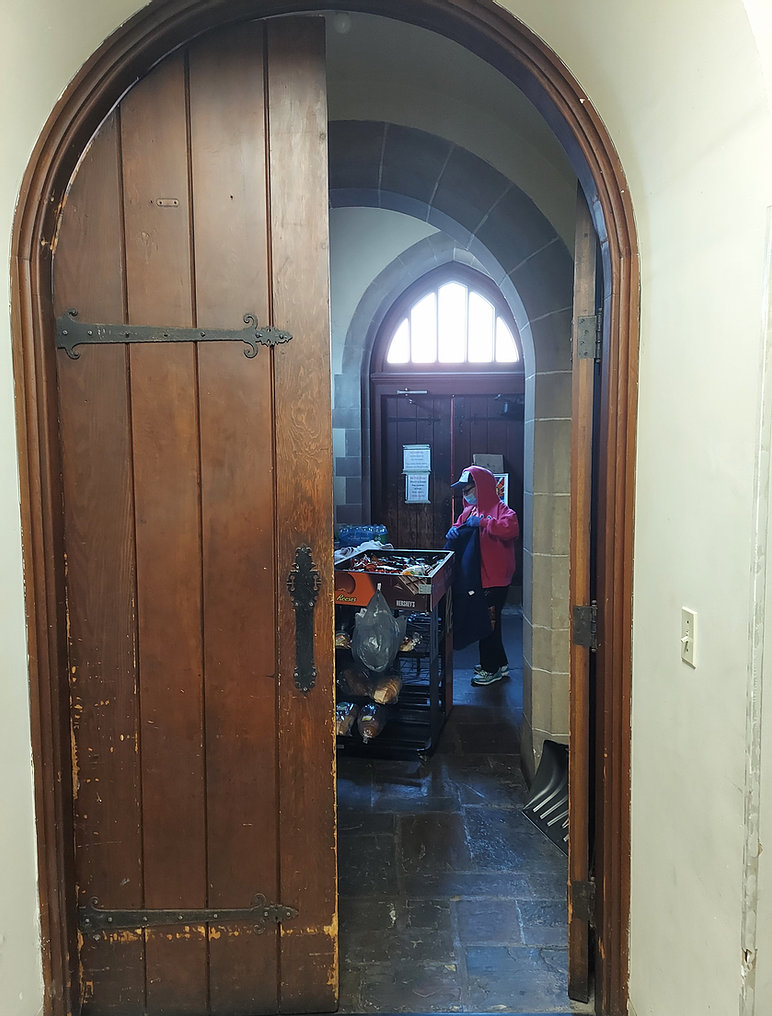 Amy Wodzenski sets up for lunch at the Community Kitchen.

The son of a coal miner, Hagerty worked as a design professor at the West Virginia University Davis College of Agriculture, Natural Resources and Design.

“As a child, I had a very good home life, but it was sparse,” Hagerty said. “We were provided for, but I was aware of all the difficulties that a lot of families had. And there were a lot of people that I went to school with who had difficulties.”

These experiences led Hagerty to volunteer his time helping out those who were less fortunate than himself.

Hagerty’s friend, Ernie, an Army veteran, convinced him to volunteer at the Morgantown Community Kitchen. Soon Hagerty became a staple of the kitchen, then the kitchen manager, and then eventually the president of the board.

“At my age now there are certain things I can’t do,” he said. “This is something I feel I can do.”

Serving in a similar role to Hagerty, Beverly Van Metre is the president of the board of directors at the Congregational Cooperative Action Project Loaves and Fishes in Martinsburg.

Her church was one of the two that founded the group in 1982. CCAP Loaves and Fishes is an entirely volunteer Christian organization with the mission of making “the church visible in Berkeley County.” It provides financial aid for bills, prescriptions, medical costs, eye exam referrals and eyeglasses, as well as work shoes and food supplies to last a household for a month.

She has been on the board of Loaves and Fishes since  2014, a year before she retired from working at the Department of Veterans Affairs medical center in Martinsburg.

As a caseworker, she helped veterans with HIV/AIDS and hepatitis C. She was drawn to helping patients who were underserved.

After her 2015 retirement, Van Metre began volunteering at CCAP in addition to serving on the board. She was motivated by her upbringing, her Episcopalian faith and her belief in helping those who are underserved.

“Usually they deserve better than they get,” Van Metre said. “And I’ve always gotten better than I deserved. I really thought it was important to continue that type of work into retirement.”

During the worst of the pandemic, the organization closed briefly. Social distancing, mask wearing and an appointment schedule were set up to help keep clients and people safe.

Clients were at first instructed to call ahead to make appointments. However, this soon hit a snag because the volunteers were reliant on calling clients to arrange appointments.

“It was a real learning experience,” Van Metre said. “People who are living in poverty have phones, but a lot of times, they only turn them on when they need them.”

This is because many people who live below the poverty line sometimes use services such as Tracfone, which charges by the minute. If a robocall comes through, answering will consume the user’s minutes. To avoid paying extra money, many people keep their phones off unless they are making a call.

Van Metre has been grateful for the donations that the organization has received, coming from churches, corporations and even some people who donated their stimulus checks.

Richard Dumas came to West Virginia during his four years in the Army. He is a native of Massachusetts, from a family of 10 siblings.

He liked the area and went to Marshall University to get his graduate degree, and never left.

Dumas takes pride in working at the Community Kitchen, going out of his way to ensure that his clients not only have a good meal, but something that looks presentable.

“My reasoning for doing it is, really, I don’t like to see people not have what they need,” Dumas said. “My father always beat into our heads: people, forgiveness and compassion. This is one way that I can really ensure that folks have a meal.”

Dumas started volunteering as his schedule allowed at the kitchen while he was working for BB&T Bank. Once he retired, he came to work at the kitchen every day that it was open. He cut that time down to three times a week to avoid burnout.

Dumas serves on the board of the kitchen. He often works at the door of the church, handing out meals to clients as they come.

“To be honest with you, the best part is the appreciation that the clients show,” Dumas said. “We have one client who will give us a dollar every once in a while, because that’s his way of giving back. Another client comes down on Sundays and picks up the cigarette butts” that are laying outside.

For Dumas, what makes coming to the kitchen worthwhile is his ability to make the clients’ lives “just a little bit better.” 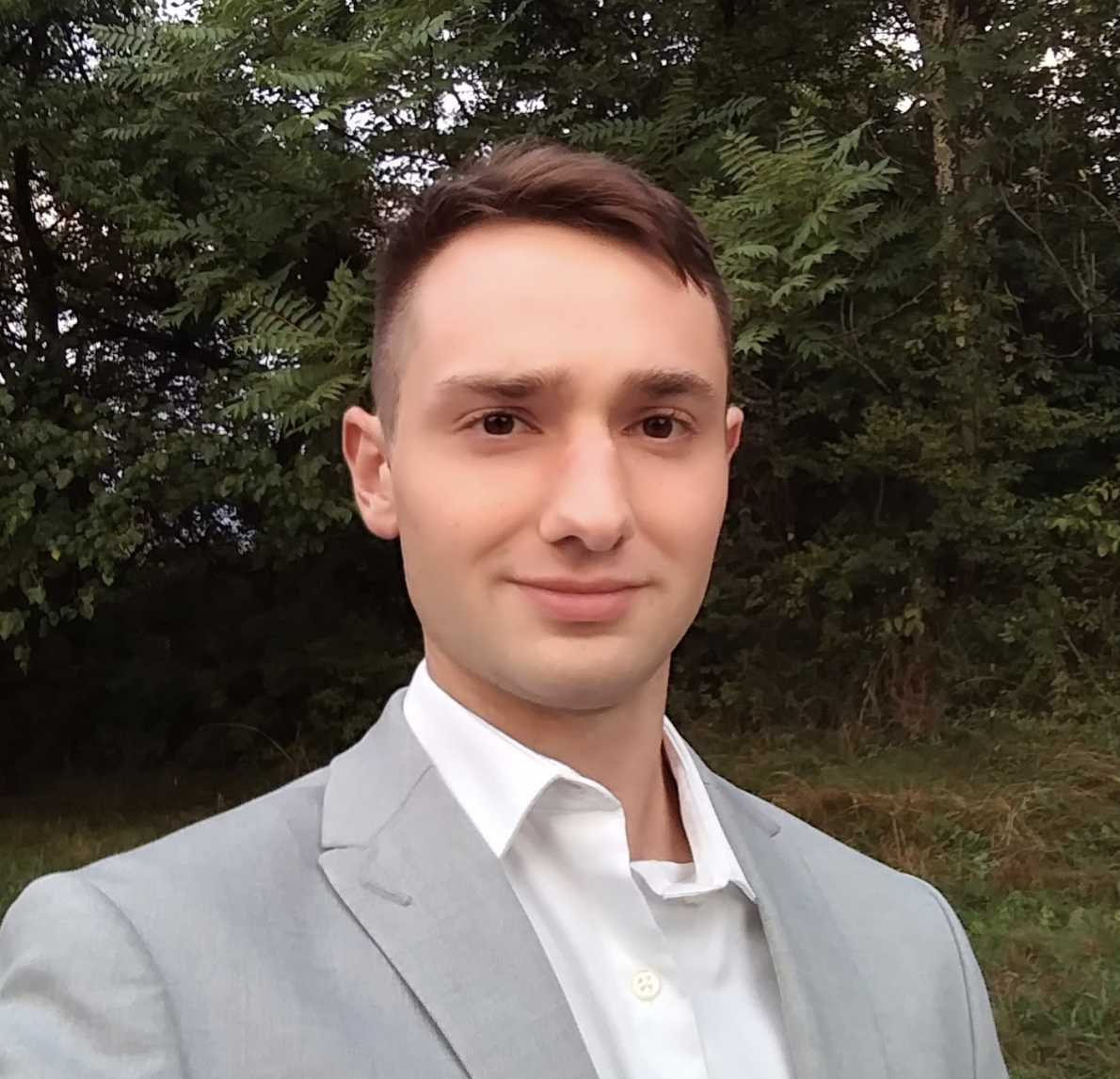 Holden Strausser has published articles in the United States Air Force’s Wild Blue Yonder digital magazine and West Virginia University’s student newspaper, The Daily Athenaeum, where he worked as its fact checker. He is a graduate assistant at WVU majoring in journalism. He is based in Smithsburg, Md.