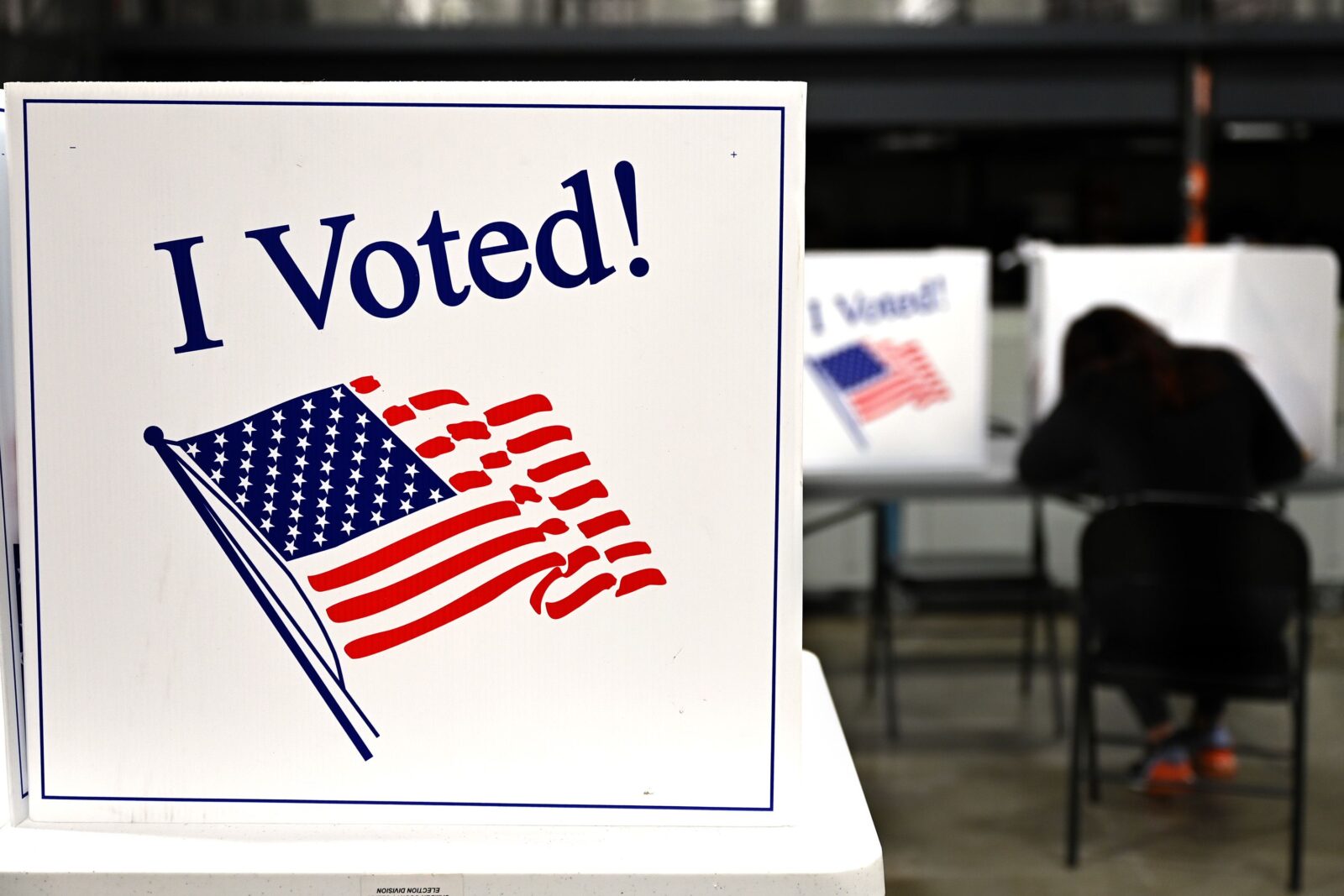 Here’s what you need to know about the 2022 primary governor election before going to the polls. // TOM GRALISH / Philadelphia Inquirer

HARRISBURG — When Democrats head to the polls on May 17 for Pennsylvania’s 2022 primary election for governor, there will be just one choice on the ballot.

Republicans will face a much different situation, with nine candidates and still no clear frontrunner.

Gov. Tom Wolf, a Democrat first elected in 2014, is unable to run for re-election due to term limit restrictions. In this vacuum, Republicans have an opportunity to win the executive branch, which would leave them in control of the governor’s office as well as the legislature.

Wolf has often served as a foil to the GOP-majority General Assembly during his tenure, vetoing efforts to rewrite the state’s Election Code, roll back environmental policies, and further restrict abortion access. Many GOP candidates have vowed to sign such legislation.

Democrats have a voter registration edge over Republicans in the state, though that 500,000-plus advantage has been shrinking. While Wolf easily won reelection in 2018, close gubernatorial races in New Jersey and Virginia last year have political watchers expecting a tight race here.

Here’s what you need to know about the 2022 primary governor election before going to the polls:

>> READ MORE: See how much money the GOP candidates for governor have raised 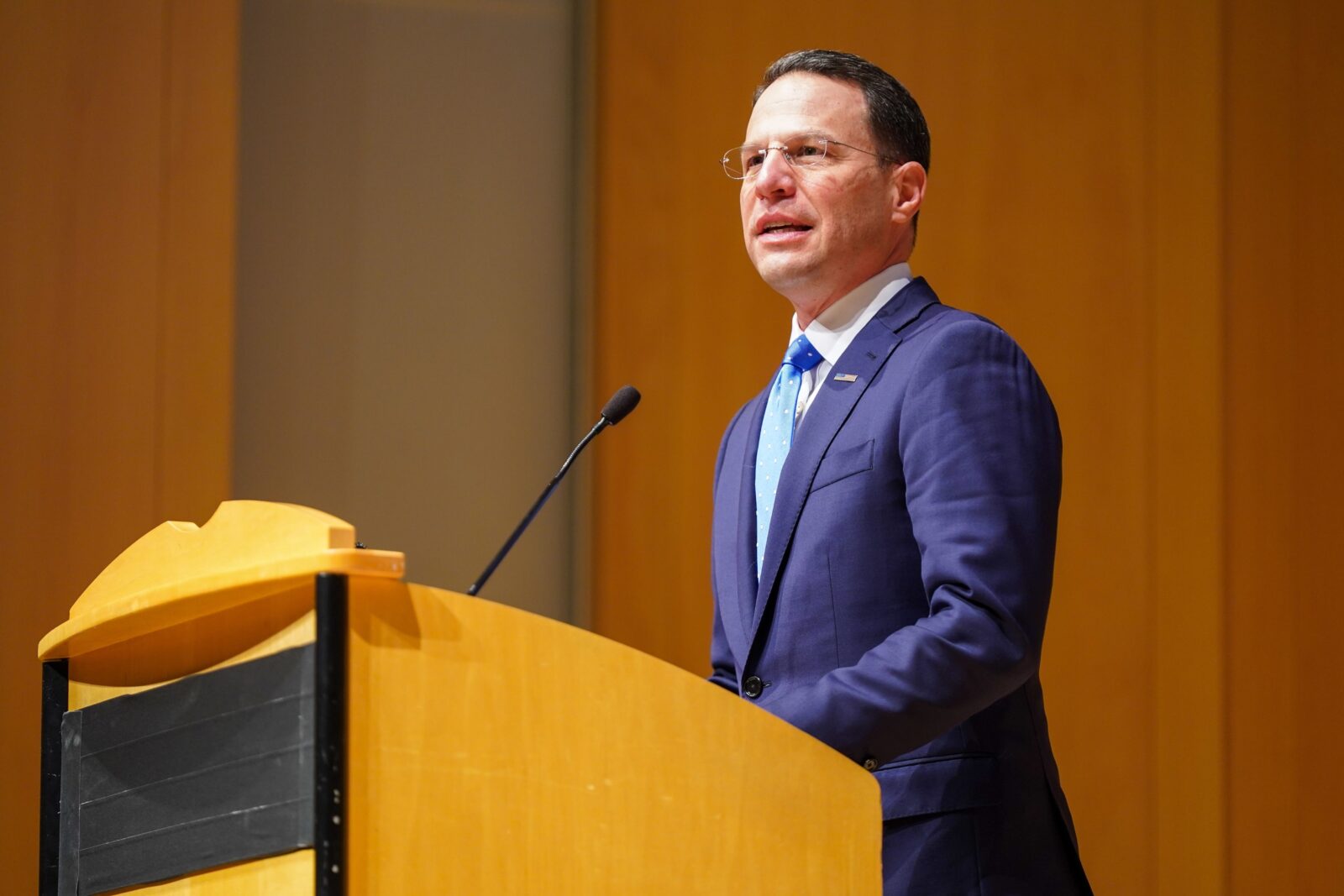 Josh Shapiro has been involved in Pennsylvania politics since 2004. // THOMAS HENGGE / Philadelphia Inquirer

Elected attorney general in 2016, Shapiro has been involved in Pennsylvania politics since 2004 — first as a state representative, then as a county commissioner in Montgomery County. As Pennsylvania’s top prosecutor, Shapiro investigated sexual abuse perpetrated by members of the Catholic Church and pursued cases relating to the opioid epidemic.

Supports repealing Pa.’s no-excuse mail voting law? No. Shapiro has said he would reject any effort to repeal the law known as Act 77. 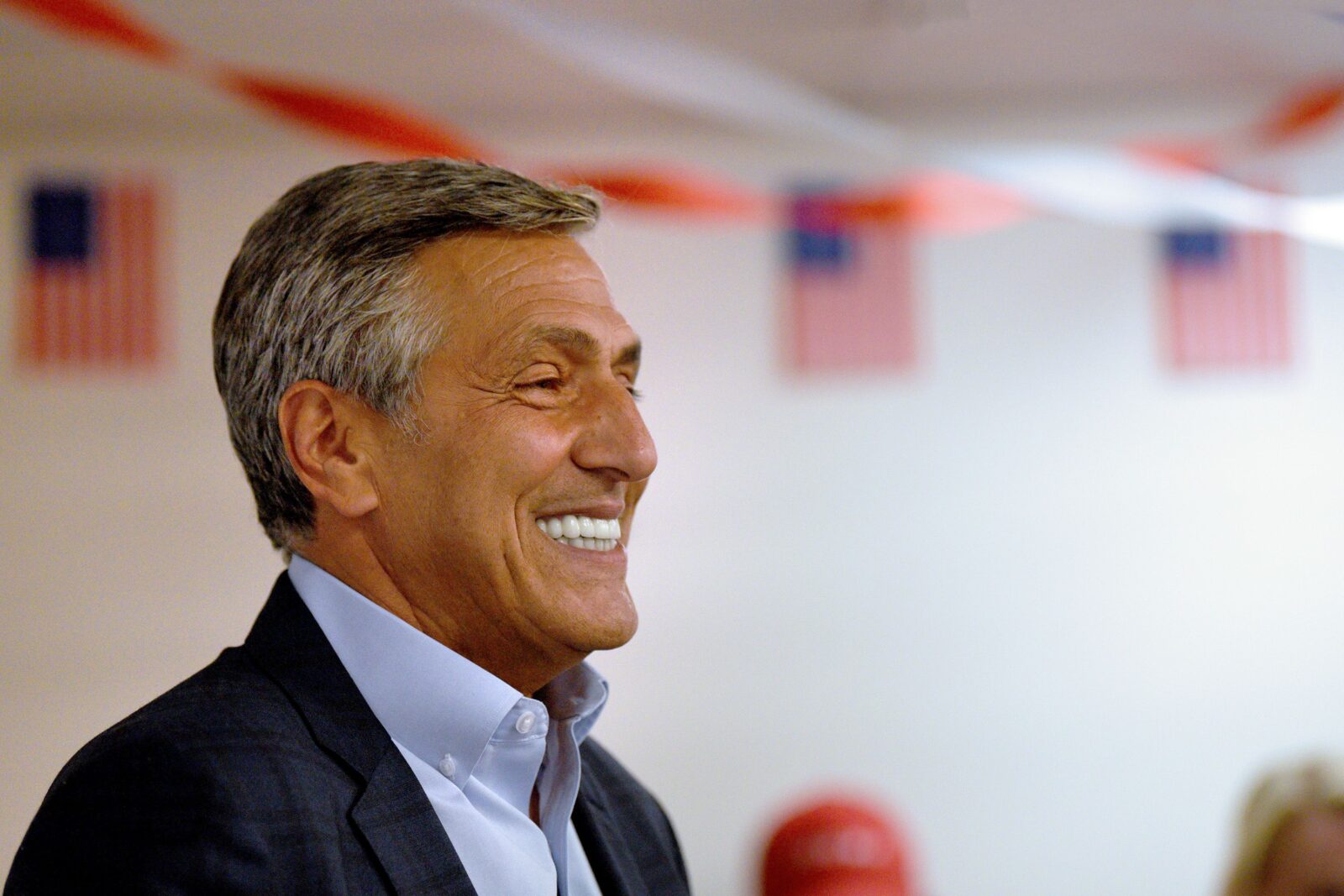 Lou Barletta started his political career in Hazleton on the city council in 1998 and then as mayor in 2000. // TOM GRALISH / Philadelphia Inquirer

Barletta started his political career in Hazleton on the city council in 1998 and then as mayor in 2000. In 2010, Barletta was elected to the U.S. House of Representatives, where he served for eight years. He unsuccessfully ran for U.S. Senate in 2018. Without providing specifics, Barletta is running on a myriad of issues including strengthening the economy, school choice, and oil and natural gas production; limiting access to abortion; and addressing “illegal immigration.”

“The language of the Pennsylvania document clearly states that this was done in case it was later determined that different electors were needed,” a Barletta campaign spokesperson told The Citizens’ Voice. 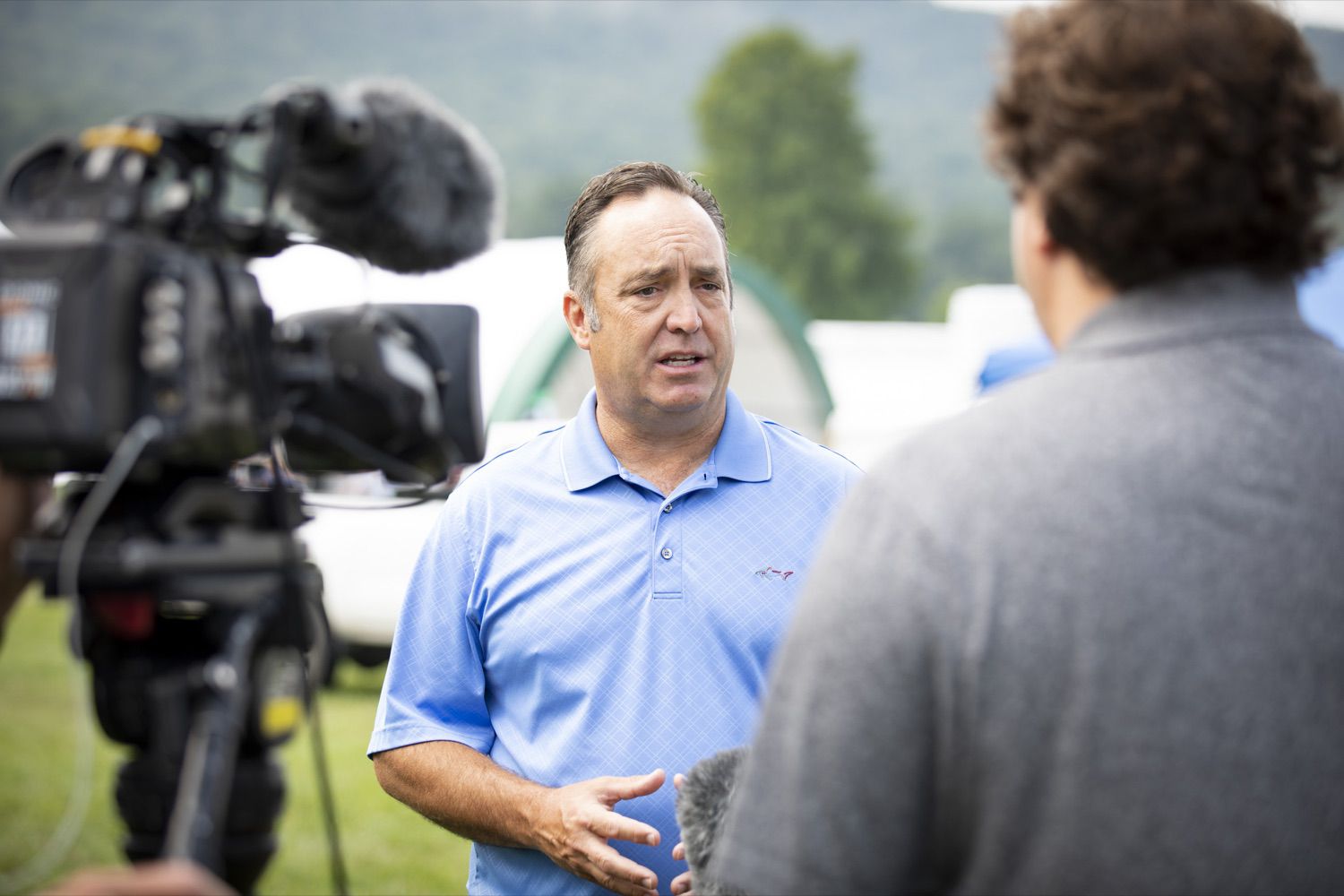 Jake Corman replaced his father as a state senator in 1999. // Commonwealth Media Services

Corman replaced his father as a state senator in 1999. He served as the state Senate majority leader from 2015 to 2020, and he’s been the Senate president pro tempore since 2020. His vague platform includes “improving education,” election security, jobs, policing, and “defending freedoms.” 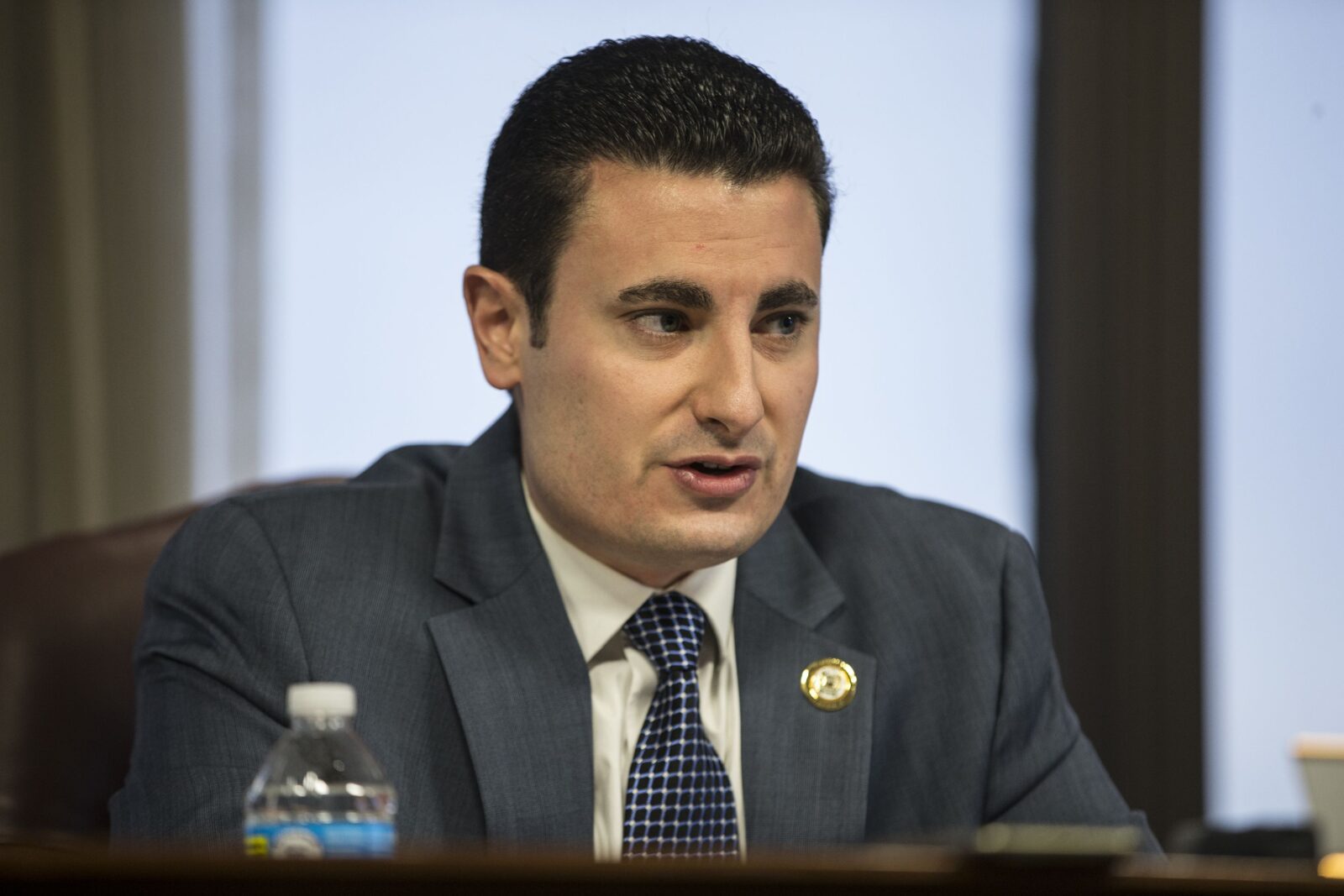 Joe Gale became a Montgomery County commissioner after being elected in an upset in 2015. // Michael Bryant / Philadelphia Inquirer

Gale became a Montgomery County commissioner after being elected in an upset in 2015 with virtually no political experience. Gale labels himself an outsider and considers the Pennsylvania Republican party insufficiently conservative. In particular, he has criticized the Republican establishment, including his opponents Lou Barletta and Doug Mastriano.

Gale calls himself “staunchly pro-life,” and said one of his top priorities is ousting Republicans he considers insufficiently conservative.

Supports repealing Pa.’s no-excuse mail voting law? Yes. He also wrote in the Times Herald, a Montgomery County paper, that any elected official who voted in favor of Act 77 should “should be disqualified from holding office.” 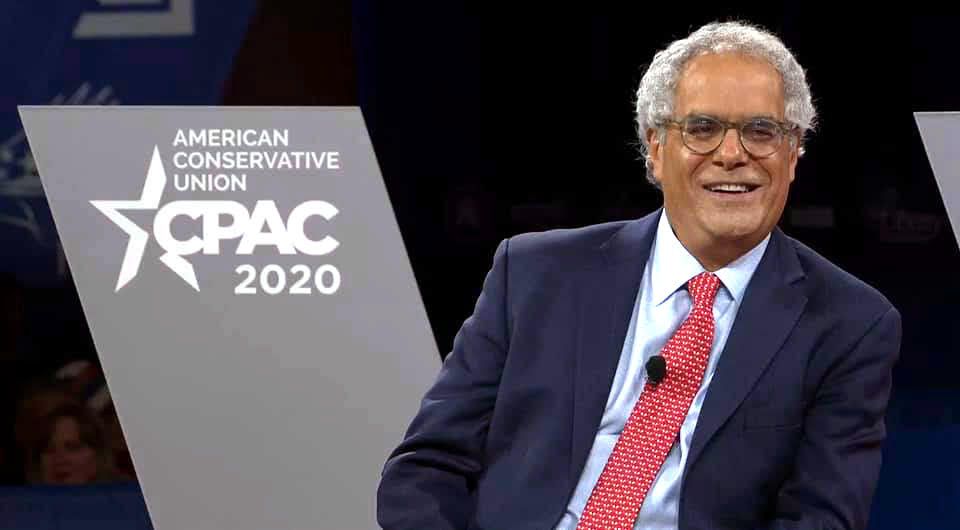 Gerow, a prominent Republican political strategist, began his career working for Ronald Reagan. Since then, Gerow has worked as a lobbyist and consultant, opening his own public communications firm. He currently serves as the vice-chairman of the American Conservative Union, which hosts the annual Conservative Political Action Conference (CPAC).

Gerow has called himself a “Ronald Reagan Republican,” saying that he is best positioned to bridge the gap between the traditional Republican party and the increasingly radical wing of his party.

His election platform has focused on promoting economic growth through traditional conservative fiscal policies of reducing taxes and regulation and wants to promote the state’s energy industry.

Supports repealing Pa.’s no-excuse mail voting law? Yes. When Commonwealth Court struck down Act 77 as unconstitutional (a ruling being appealed in the state Supreme Court), Gerow called it “great news for election integrity and the prevention of voter fraud and ballot harvesting.” Gerow’s name was also listed on a certificate to assign Pennsylvania’s Electoral College votes to Trump, should a court challenge have succeeded. 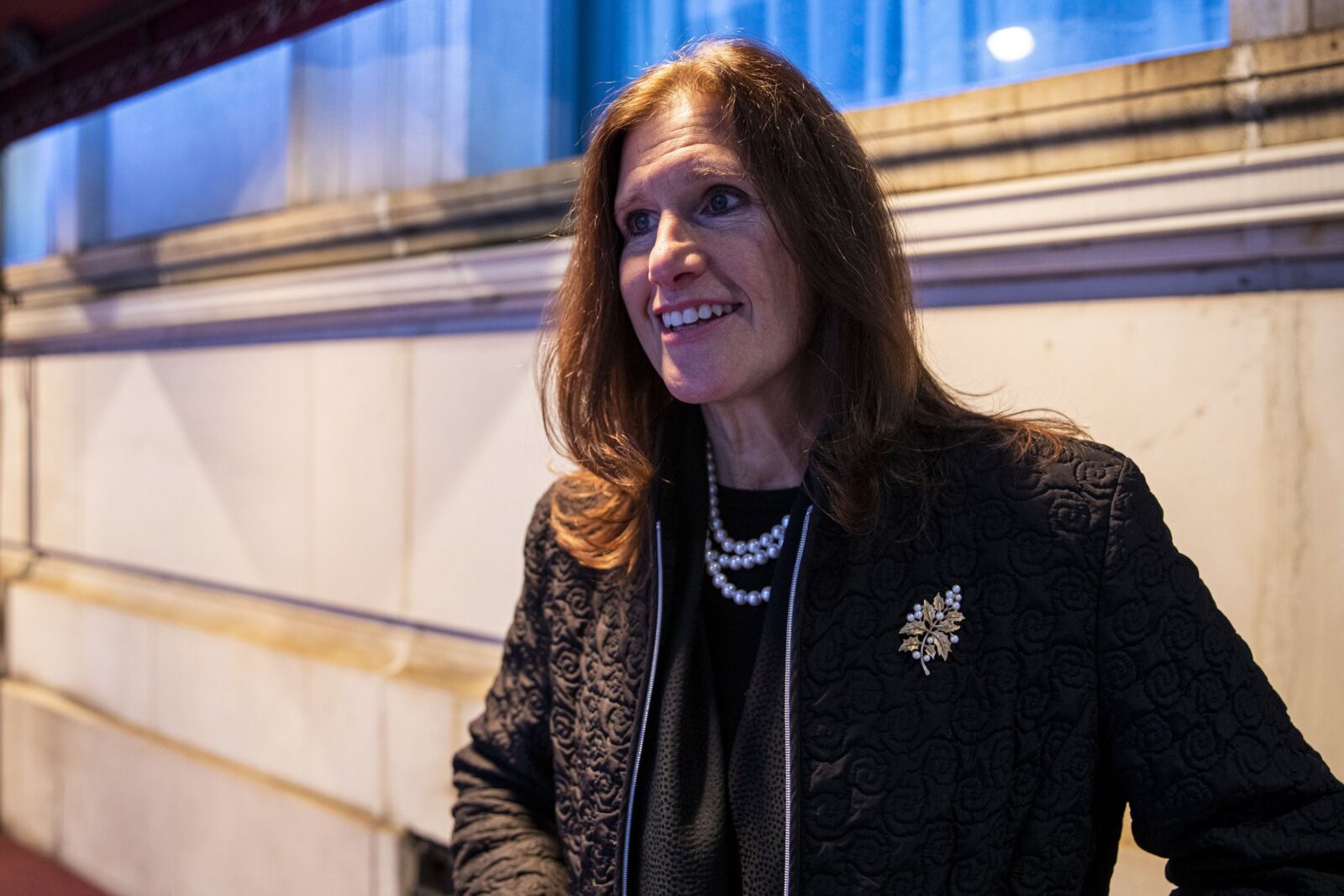 Melissa Hart has served as both a member of Congress and as a state senator. // TYGER WILLIAMS / Philadelphia Inquirer

Hart has served as both a member of Congress and as a state senator representing Allegheny County. She has said that her success in areas that had majority Democratic registration speaks to her electability. Hart has been working as a lawyer for the past 14 years and is currently an attorney at Hergenroeder Rega Ewing & Kennedy, a law firm based in Pittsburgh. 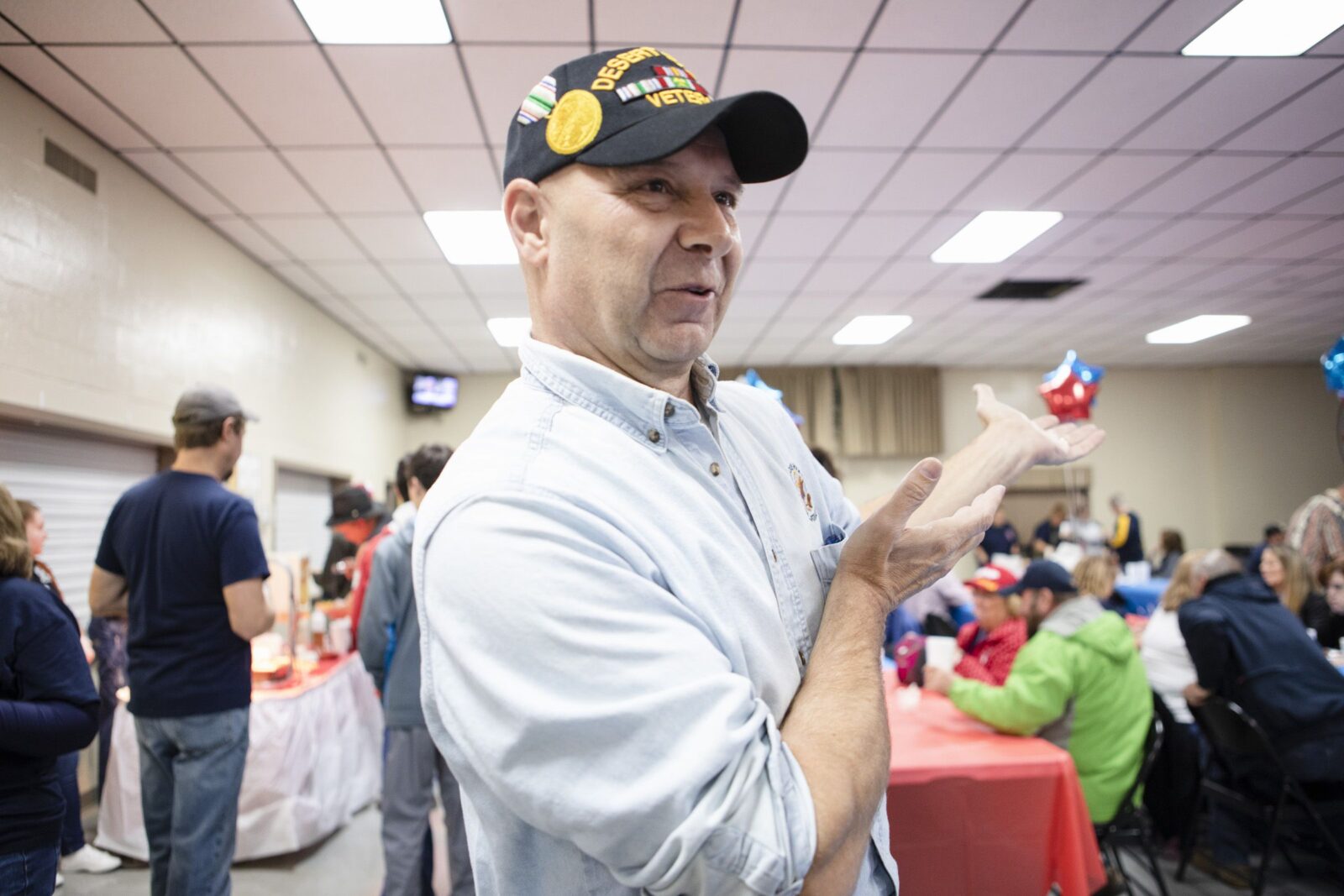 A retired Army colonel, Mastriano began serving as a state senator in 2019 and has been called a Christian nationalist, a label he rejects. However, he has often shared Islamophobic posts on social media, the New Yorker reported.

Mastriano has highlighted anti-abortion policy, fiscal conservatism, and Second Amendment rights as central tenets of his campaign. He led many anti-shutdown rallies during the early months of the pandemic.

Supports repealing Pa.’s no-excuse mail voting law? Yes. Mastriano has propagated false claims of widespread election fraud. He has been subpoenaed by the Jan. 6 committee over his communication with the Trump White House during attempts to overturn the results of the 2020 presidential election. He was also seen near the Capitol on the day of the insurrection. 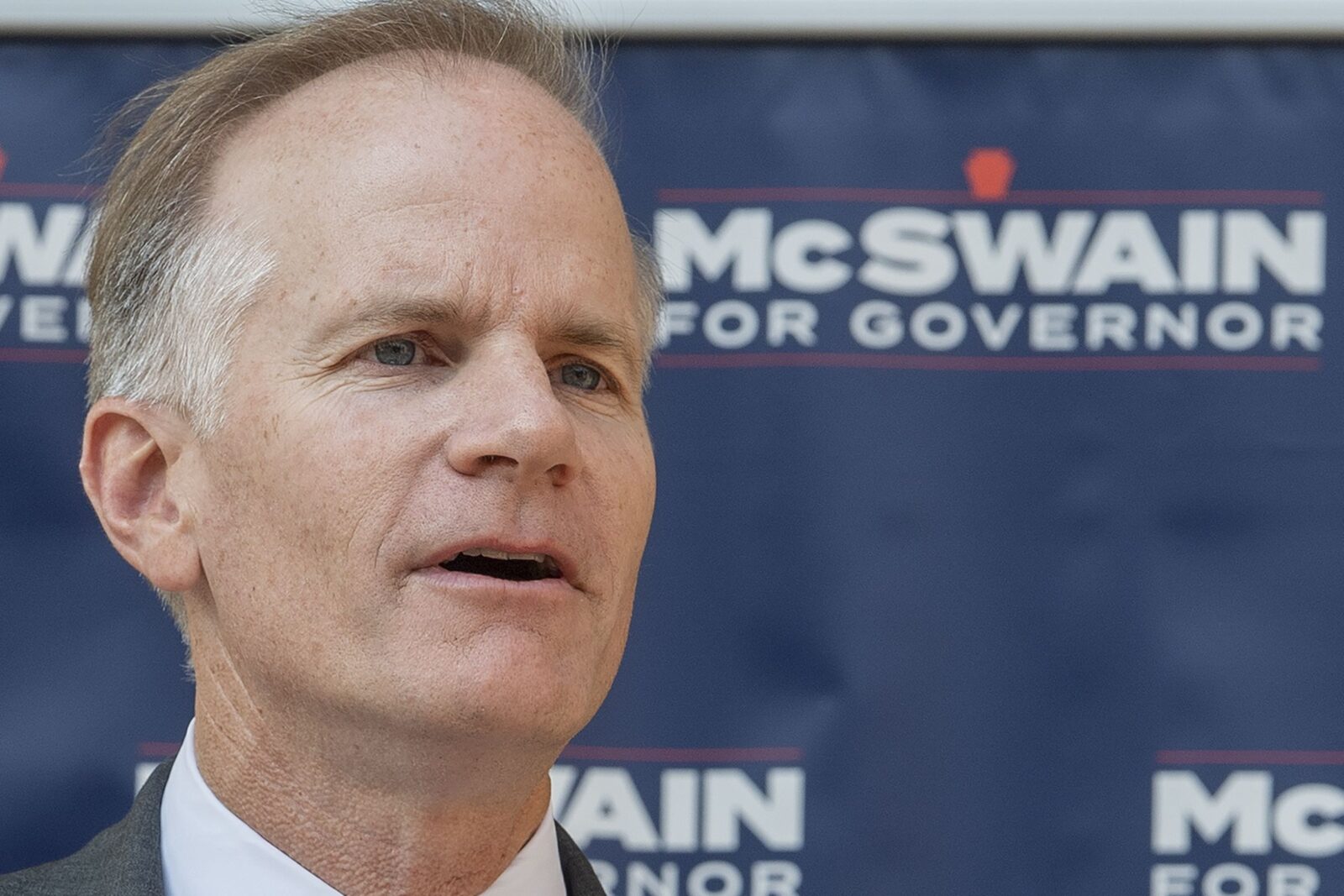 McSwain is a former Trump-appointed U.S. attorney in Philadelphia, where he had a contentious relationship with its elected officials.

If elected governor, he has promised to focus on stimulating the economy and energy production, improving access to education, limiting access to abortion, dealing with the opioid epidemic, and “bringing back law and order.”

Endorsements: Sean Parnell, a former candidate for U.S. Senate who dropped out after he lost custody of his children in a case that also revealed allegations of domestic abuse; state Rep. Kathy Rapp; Commonwealth Partners Chamber of Entrepreneurs; Republican State Committee of Chester County 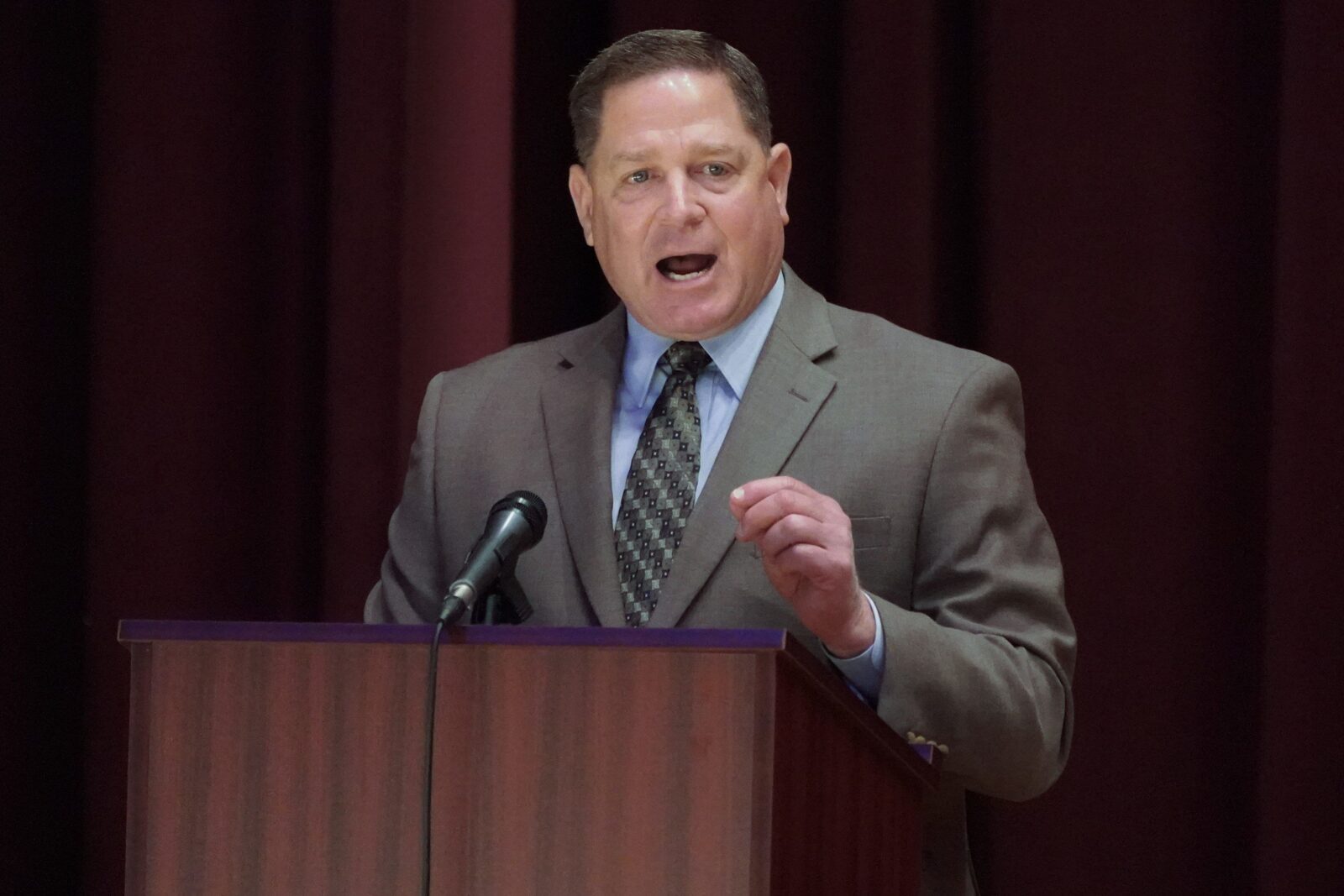 Dave White is the owner of an HVAC company and a former Delaware County Council member. // Keith Srakocic / AP

White is the owner of an HVAC company and a former Delaware County Council member. He’s campaigning as a political outsider and someone with “real world” experience.

In a press release announcing his candidacy, he called for allocating more funding to police, lowering taxes, and railed against “critical race theory” — an academic framework to study race in society and law that has been co-opted by right-wing activists as indoctrination by progressives — and “kids failing in schools.” On his website, White listed protecting Second Amendment rights, limiting access to abortion, and preventing transgender women from competing in women’s sports as priorities. 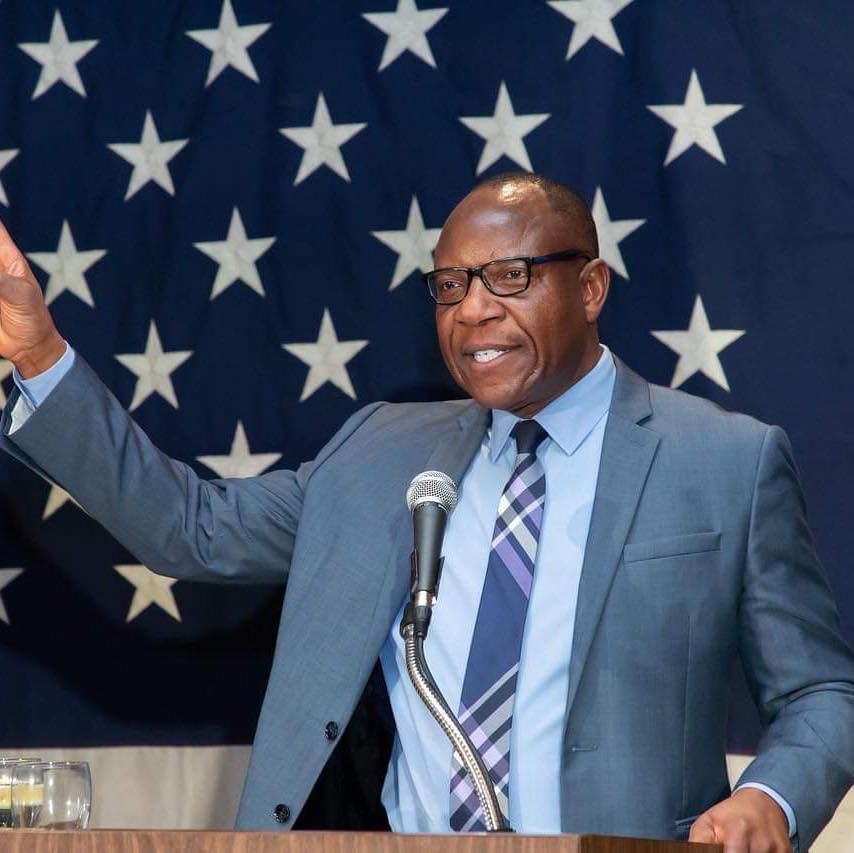 Nche Zama is a cardiothoracic surgeon who lives in the Poconos and immigrated to the United States from Cameroon as a teenager on a student visa. // Courtesy Nche Zama campaign

Zama is a cardiothoracic surgeon who lives in the Poconos and immigrated to the United States from Cameroon as a teenager on a student visa. With virtually no political experience, Zama believes his independence from the political establishment will distinguish him from the other candidates.

Zama’s campaign has centered on education and health care, two things he says he has personally benefited from after immigrating to the United States.

Supports repealing Pa.’s no-excuse mail voting law? Yes. Zama has said he supports its repeal and would want to set up a commission to look more deeply into the topic.