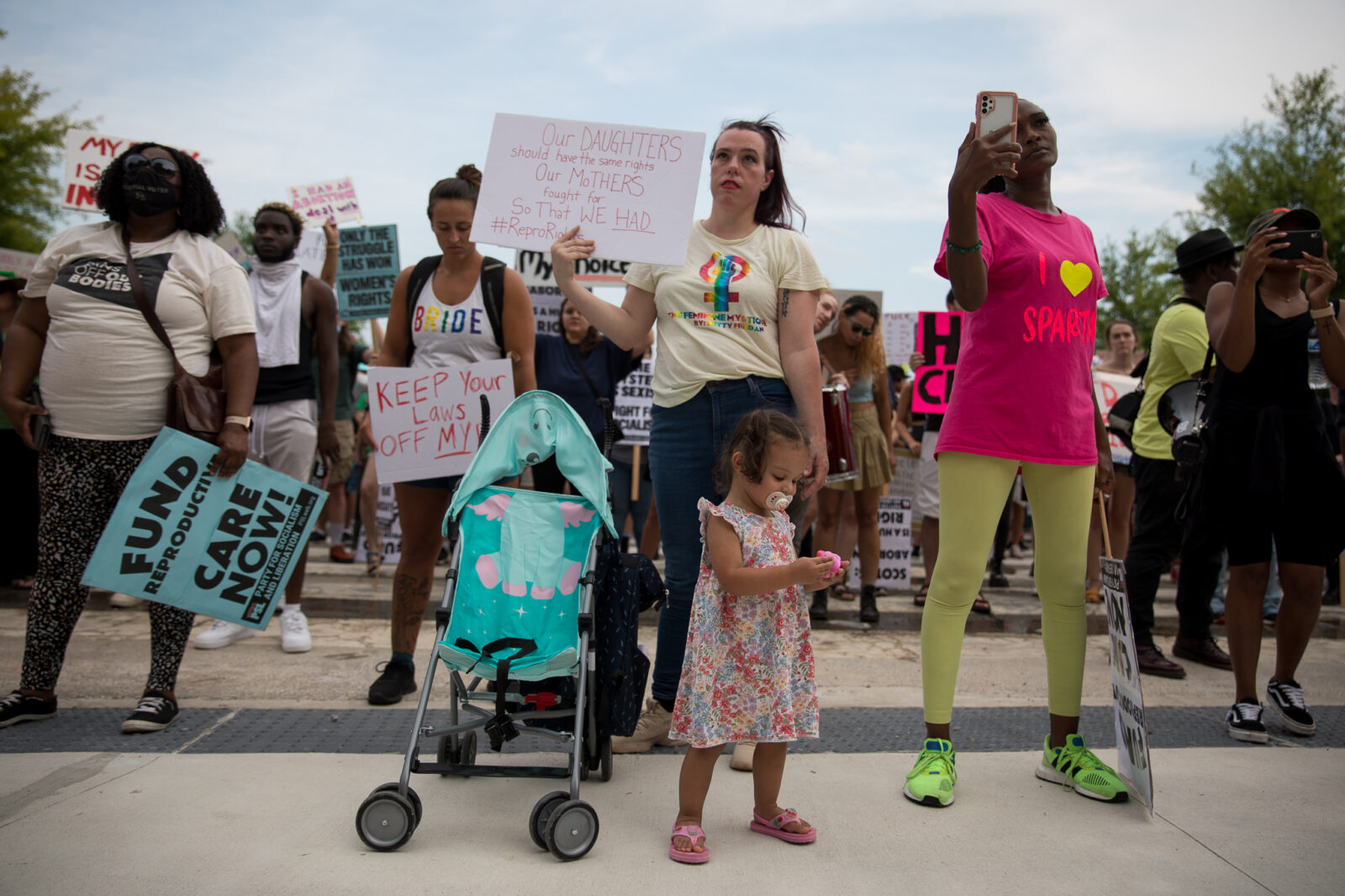 Women gather outside of the Georgia State Capitol in Atlanta on June 24 to protest the Supreme Court’s decision to dissolve federal abortion protections. In 2019, state lawmakers passed a law that would ban most abortions at around six-weeks. // Riley Bunch/GPB News via Georgia Recorder

Nearly 62% objected overall, with about 54% saying they strongly opposed it. Black respondents were the most adamantly against it, with 86.4% of them saying they firmly disapprove of the law.

When asked how a candidate’s position on abortion would factor into their decision-making at the ballot box, 47% of those surveyed – including 76% of Black respondents – said they are more likely to back someone who will protect access.

About 29% said they would vote for someone who would restrict access, and about one-fifth of voters surveyed said a candidate’s position on abortion had no bearing on how they will vote this fall.

The Georgia Recorder is one of several newsrooms that are part of the Georgia News Collaborative that commissioned this poll from the School of Public and International Affairs Survey Research Center at the University of Georgia.

The statewide poll surveyed 1,030 likely voters and contains a margin of error of 3.1 percentage points.

The numbers help explain why Georgia Democrats running for statewide office have put abortion access at the center of their campaigns. It also sheds light on why Republican candidates, including some who had a hand in creating Georgia’s 2019 anti-abortion law, have largely stayed mum on the issue.

But after the U.S. Supreme Court overturned Roe v. Wade in June and ended the nearly 50-year federal protection of abortion rights, the issue became one of the dominant factors of this year’s midterm election.

Angela Brewington, a 57-year-old software engineer who lives in Henry County, said the state’s abortion law and this year’s permitless carry were her two main beefs with Republican Gov. Brian Kemp. She plans to vote for Democrat Stacey Abrams.

Brewington wasn’t opposed to tighter abortion laws in Georgia. The state’s previous ban after about 20 weeks was too late into a pregnancy, she said, mindful of her niece who was born at 22 weeks. But she argues a 12-week ban would be more reasonable than today’s restrictive law, which she says went too far.

“These are not my views, personally, on abortion of what choices I would make,” Brewington said. “But I don’t think that the state has a right to have a six-week ban. You barely know that you’re even pregnant at six weeks.” 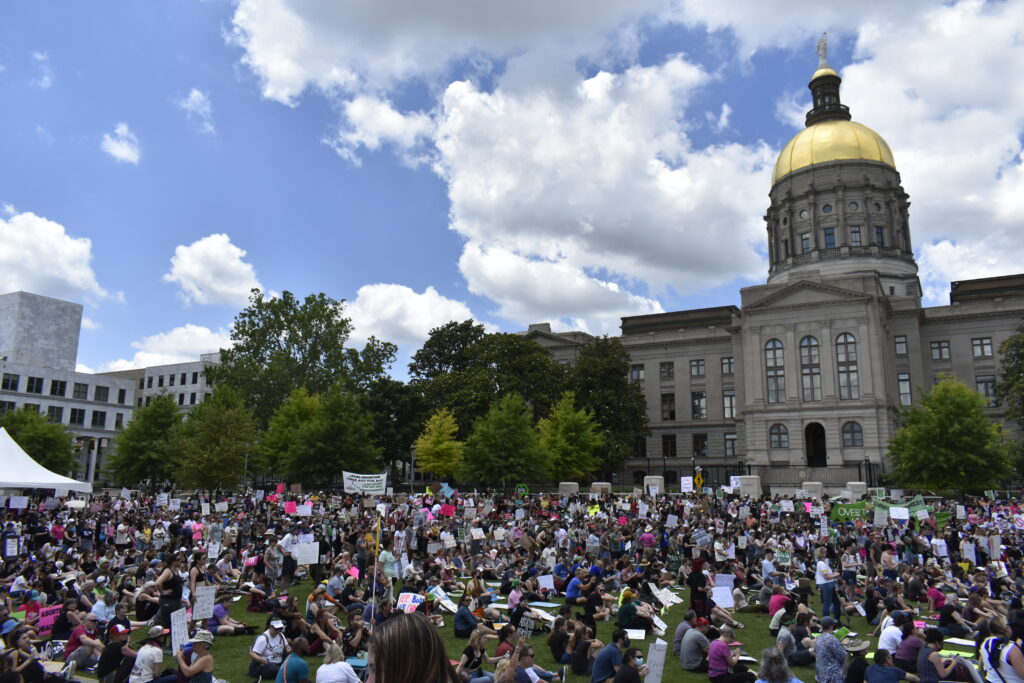 ‘Something we need to fight for’

Democrats hope anger over Georgia’s new law will mobilize their base and win over some swing voters. They are banking on the tactic even in races – like the Secretary of State contest – where the issue may not seem directly connected.

“We cannot talk about voting rights without talking about reproductive rights. An attack on one is an attack on another,” Nguyen said in a recent speech.

The issue is resonating with some voters on the campaign trail, although it remains to be seen if the Democrats’ argument holds enough power to shape the outcome of the midterm elections when economic factors loom large.

Martha Zoller, a conservative activist and board member of the Georgia Life Alliance, a group that advocates for abortion restrictions, said that she believes that Democrats have been “trying to scare people” with incessant ads about Georgia’s recently implemented abortion law.

“I don’t think that this issue is moving people the way the left hoped it would,” she said.

But Democrats aren’t just eyeing more independent-minded voters. They are hoping that the hot button issue will turn out left-leaning Georgians who don’t usually engage in partisan politics.

Erica Senegal, who lives in Cobb County, says she has always avoided talking about politics. Whatever opinion she had, she was content expressing it silently with her vote.

But on a recent Saturday afternoon, the nurse found herself at a Smyrna restaurant with the Democratic candidate for attorney general, Jen Jordan, and participating in a roundtable discussion on abortion access. Jordan has said she would not defend the state’s new abortion restrictions if elected.

Senegal said afterwards that it was her first time attending such an event, but it likely won’t be the last. The Supreme Court decision and the implementation of Georgia’s strict anti-abortion law have left her fired up, saying it’s “something we need to fight for.”

“Why are they taking away a woman’s right to her body, regardless of what the reason is,” Senegal said. 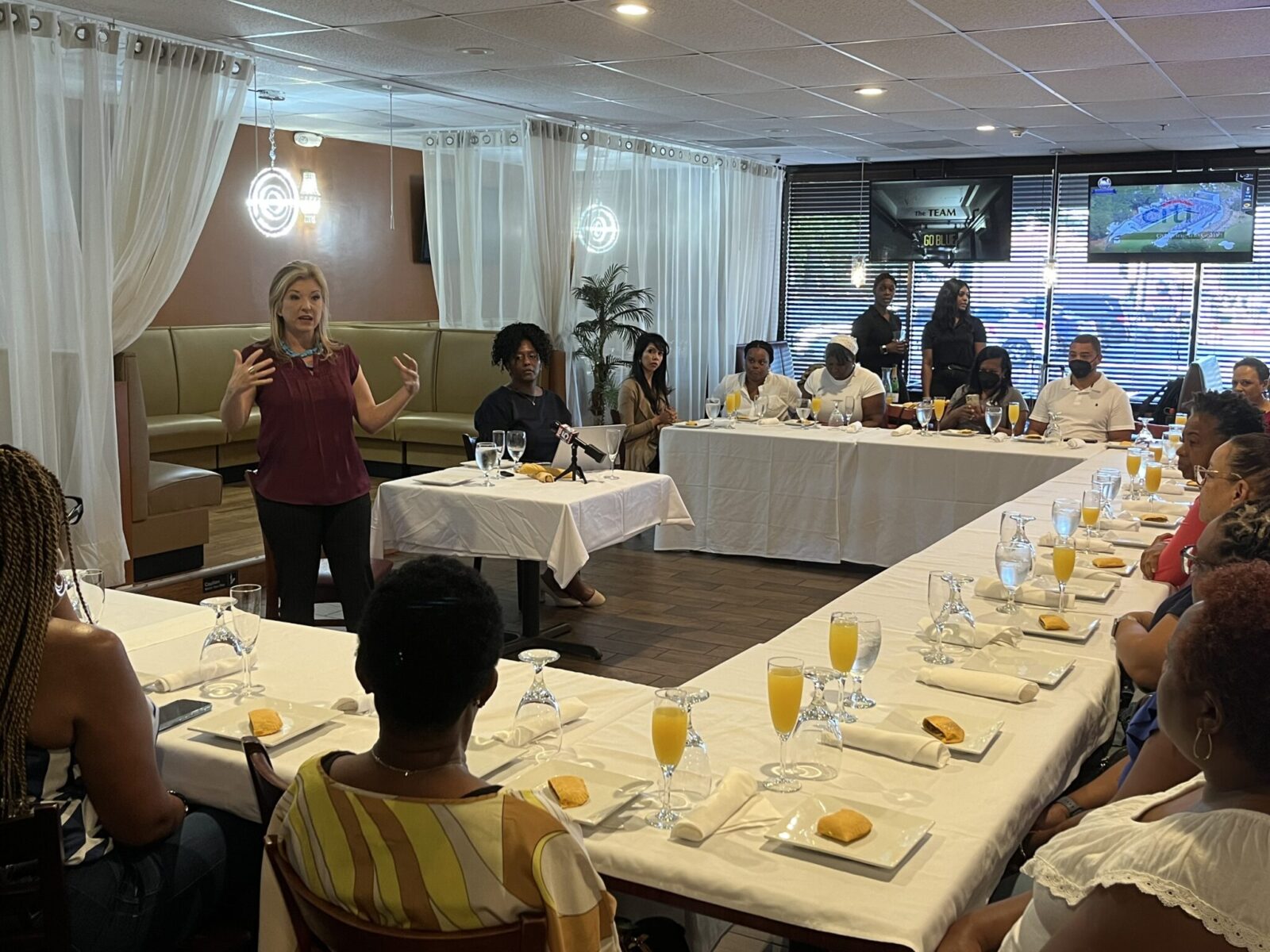 Voters said kitchen table issues like the economy and inflation are still top-of-mind when they go to cast ballots in November.

Susan Hasel, a 36-year-old publication assistant in Walton County who participated in the survey, said she very much backs Georgia’s new abortion restrictions and the narrow exceptions it allows, such as in the case of rape. She also favors candidates who say they will limit abortion access.

Still, Hasel said she doesn’t think the issue of abortion will have a significant impact on the election.

“This close to Christmas, it’s going to be the economy. 100%,” she said. “I’ve got friends that had to get a second job just to make ends meet, and they’re in businesses that pay very well.”

The dynamic explains why most Georgia Republicans don’t need to put emphasis on the issue, including Kemp who has said little about the implementation of the state’s strict abortion law.

Almost immediately after Roe v. Wade was overturned, a federal appeals court ruled the state’s law – which has been tied up in a legal battle for three years – could take effect.

What on the surface seems like an easy campaign talking point for Kemp has been left out of his stump speeches – even at a conservative Christian conference in Atlanta, where attendees were overjoyed that the law passed.

Experts say Republicans like Kemp are also likely wary that the crackdown on abortion will push some of the more moderate voters in their party away.

One such voter is Scott Davenport, who on a recent Saturday morning was doing some gardening in his East Cobb neighborhood with his wife, Lisa.

The pair has lived in the heart of the suburban county for more than 30 years and when they first moved in all their neighbors were Republicans. Now, Davenport said, more than half are likely Democrats.

Davenport was a lifelong Republican, too, until President Donald Trump took office. Now, he said, he doesn’t align with the party’s “negativity” and what he called a stray from core GOP principles like limited government – particularly with abortion, although he is an opponent.

“The Republican position has always been individual rights,” he said. “So you can be pro-choice and I can be pro-life. And that’s okay. You have the right to choose that. And so I don’t understand how they want more government in the bedroom, but less government everywhere else.”

“And for me, when they don’t have exceptions for rape and incest, the life of the mother, when they’re forcing 10-year-old girls who are raped to have babies, I mean, I’m out. That’s it for me. So, no, they don’t have my vote,” he said.

The debate over whether or not there should be abortion exceptions has also played out on the campaign trail. Lawmakers included narrow exceptions in the 2019 bill, such as if the life of the mother is at risk.

But Republican U.S. Senate candidate Herschel Walker has said he would support a total ban with no exceptions for rape, incest or a threat to the life of the mother.

Pam Calloway, 55, a receptionist from Fayette County and a poll respondent, strongly opposes abortion and would support a total ban. She said she plans on voting for both Kemp and Walker.

“As far as Kemp with the heartbeat law, I fully support it 100%. I’m pro-life,” she said. “I’m glad that that has finally found its way.” 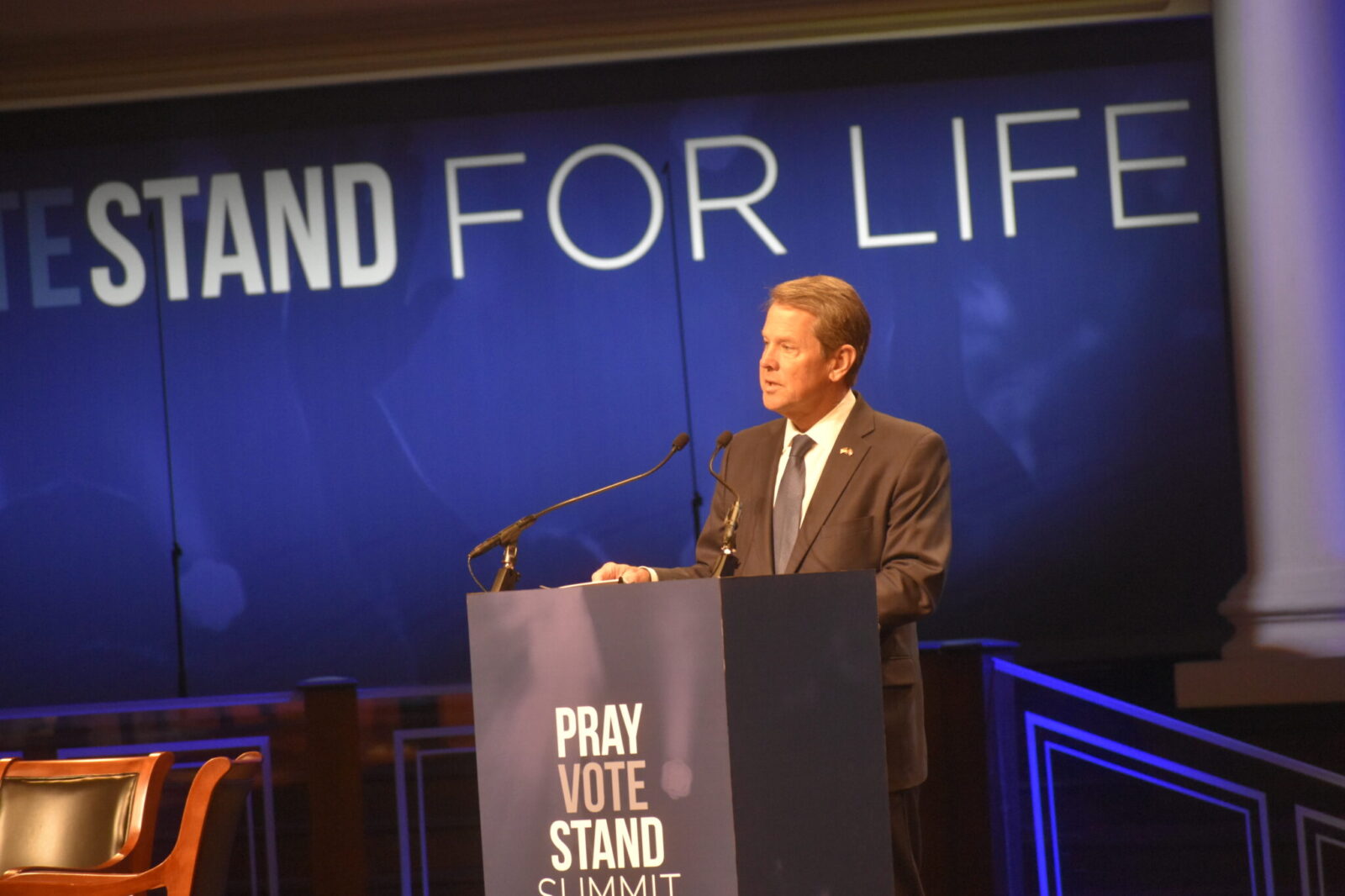 ‘It’s going to take a lot of prayer’

Recent allegations against senate candidate Herschel Walker have pushed the issue back to the forefront of the campaign cycle. A recent report from The Daily Beast details claims from an ex-girlfriend that Walker paid for her to have an abortion in 2009.

Walker has adamantly denied the claims even as the news made national headlines.

Zoller said the allegations have renewed the conversation around abortion but it’s too early to tell if it will actually have an impact on Republican voters.

“It’s certainly problematic,” she said. “I think there are Republicans that are questioning what they’re going to do. But I do think ultimately when they get into the ballot box, that they’re probably going to vote for who is going to vote for their values, which I think would be Herschel Walker.”

Sarah Simcox, a 56-year-old kindergarten teacher in Forsyth County, said she is struggling with her decision.

“If these things are true [about Walker], that’s horrible,” Simcox said. “But I think politically he might be better [than Warnock]. … I’m struggling with it. It’s going to take a lot of prayer.”

But others, like Susan Hasel from Walton County, are unfazed by the news reports.

“What he did in the past is in the past. Leave it there. Everybody has a past, and no one’s perfect. And I don’t expect a candidate to be perfect,” Hasel said.

Riley Bunch is a public policy reporter at Georgia Public Broadcasting, covering the intersection of government and daily life.

Reporter Rebecca Grapevine with Capitol Beat contributed to this story.

The Georgia Recorder is an independent, nonprofit news organization that is focused on connecting public policies to stories of the people and communities affected by them.

The Georgia News Collaborative represents organizations and individuals with a passion and ability for strengthening local news in Georgia. Members, including the Georgia Recorder, represent a diverse array of geographies, media types, and constituencies. The collaborative aims to strengthen local news in Georgia by sharing resources, providing training and cooperating on reporting projects.