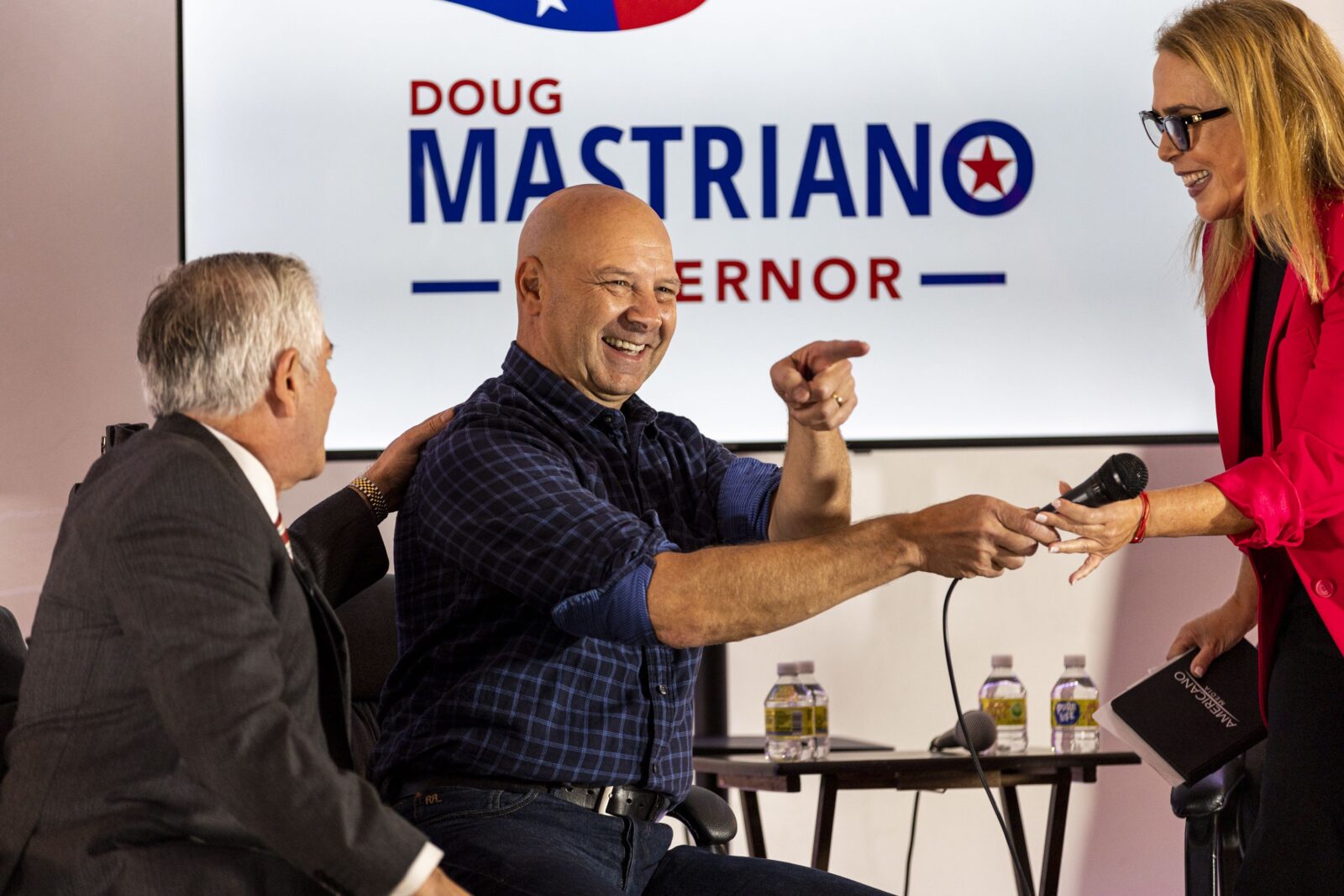 $1.3 million was spent by a handful of groups working to defeat Doug Mastriano, a state senator from Franklin County. // Tyger Williams / Philadelphia Inquirer via Spotlight PA

HARRISBURG — In the nationally watched race for Pennsylvania governor, Democrat Josh Shapiro has outspent Republican rival Doug Mastriano by tens of millions of dollars, carving out a formidable financial advantage in a contest widely viewed as a referendum on nearly every major issue in American politics.

But Shapiro, the state attorney general, has also separately benefited from millions in spending by groups not connected to his campaign that have a clear partisan agenda and aim to influence the outcome of the election.

Campaign finance records show those outside groups have spent a combined $2.5 million since the start of the year, mostly on advertisements, but also on polls, knocking on doors, and leaving literature on the doorknobs of potential voters.

The spending presents another obstacle for Mastriano, who has struggled to gain traction with establishment GOP donors and whose campaign has complained (in since-deleted tweets) about the lack of institutional support.

About half of that money — or $1.3 million — was spent by a handful of groups working to defeat Mastriano, a state senator from Franklin County. That includes the Washington, D.C.-based Republican Accountability Project, which was formed by current and past Republicans in 2020 to oppose former President Donald Trump and now works to defeat GOP candidates who push unfounded claims of widespread election fraud.

“We beat up on the anti-democracy Republicans,” said Gunner Ramer, the political director for the Republican Accountability Project’s political action committee.

The spending presents another obstacle for Mastriano, who has struggled to gain traction with establishment GOP donors and whose campaign has complained (in since-deleted tweets) about the lack of institutional support. His political fundraising trails Shapiro’s by more than $45 million, according to the latest campaign finance reports, which capture fundraising from January of last year through late September.

The spending by outside groups, called “independent expenditures,” is separate from the money Shapiro, Mastriano, and other candidates spend through their campaign accounts. Those independent expenditures are reported to the state separately — and because of that, often fly below the radar and don’t give the full picture of spending in big races.

Under state law, independent expenditures are made by groups that want to influence the outcome of an election, but are prohibited by law from donating directly to political candidates or coordinating with their campaigns. Those groups include super PACs, which can raise unlimited amounts of money and must disclose their donors to the Federal Election Commission, and dark money nonprofits, also known as “social welfare” groups, which are not required to publicly disclose who bankrolls them but do have to report any political spending.

Those groups most often spend their money on political ads, including ones that expressly advocate for a candidate to be elected or defeated.

In Pennsylvania, when those groups spend money to influence the outcome of an election, they have to report the amount they spent and the date they spent it. They also must explicitly designate whether the expenditure was for the purpose of opposing or supporting a specific campaign.

Since the start of the year, 13 such groups have spent $2.5 million on the governor’s race, according to a Spotlight PA analysis of independent expenditures. About $1 million of that was by groups advocating for a Shapiro win.

Another $1.3 million was spent in an effort to defeat Mastriano, who controversially became Pennsylvania’s lead defender of Trump’s unfounded claims that the 2020 election was stolen from him.

The majority of that anti-Mastriano spending — about $850,000 — was for ads (including on television, YouTube, and Facebook) by the Republican Accountability Project’s eponymous super PAC.

Earlier this month, the group also announced the launch of a separate, “six-figure” billboard campaign in Pennsylvania that will feature “Republicans, former Republicans, and conservatives” explaining why they plan to vote for Shapiro, according to a press release. The billboards, the group said, are slated to appear in major media markets, including Philadelphia, Harrisburg, and Pittsburgh.

“Our target is suburban, college-educated voters,” said Ramer, and “showing them who Doug Mastriano is.”

Some outside groups have countered that anti-Mastriano spending with ads on the senator’s behalf, but the expenditures pale in comparison — just under $135,800 in all.

Despite its Republican roots, the super PAC, which discloses its donors in filings with the Federal Election Commission, is heavily funded by deep-pocketed Democratic contributors, according to a recent analysis by Open Secrets, a nonpartisan group that tracks money in U.S. politics.

Another group, Mechanicsburg-based Better Pennsylvania Inc., has spent the second-highest amount of money dedicated to defeating Mastriano, contributing just over $355,000. The group is organized as a social welfare organization under the Internal Revenue Service’s tax code, so it does not have to disclose who gives it money.

In an interview, Better Pennsylvania’s interim executive director, Jan Jarrett, said the organization works to improve the lives of working families, and advocates for what she called economic justice issues, including property tax rebates for older adults and a higher minimum wage.

A Mastriano administration, she said, “would be a disaster for middle class working families,” and the policies for which Better Pennsylvania advocates. Her group’s spending has been mostly on digital ads, many of those on Facebook.

Some outside groups have countered that anti-Mastriano spending with ads on the senator’s behalf, but the expenditures pale in comparison — just under $135,800 in all.

The majority of that money, about $111,000, came from the coffers of Gun Owners of America, a self-proclaimed “no compromise” gun rights group. The money went toward pro-Mastriano ads on Facebook, a platform where the senator has built a loyal grassroots following.

Val W. Finnell, the group’s Pennsylvania director, said his organization backs Mastriano because of the lawmaker’s strong stance on gun rights. Since being elected to the state Senate in 2019, Mastriano has introduced legislation that would ban the enforcement of federal gun laws in Pennsylvania, and has voted in favor of legislation that would allow permitless concealed carry.

“We developed a very good relationship with Doug Mastriano over the last several years since he came into office, and we found that, you know, he’s been a very solid Second Amendment supporter,” said Finnell, whose organization is not required to disclose its donors.

Mastriano also received an assist from the Women Speak Out PAC, which spent just under $21,000 to help his campaign and oppose Shapiro’s.

The PAC is a partner of SBA Pro-Life America, a super PAC that opposes abortion rights. A representative for the group did not respond to a request for comment.

Shapiro also attracted the dollars of outside groups — although the lion’s share of spending by those groups went toward boosting his election chances.

In all, seven organizations have spent just over $1 million since the start of the year to help the Democrat. About $757,400 of that came from the Conservation Voters of PA Victory Fund for door-knocking focused in Philadelphia’s collar counties, as well as political ads and digital and mail campaign pieces.

This gubernatorial contest, said Parzen, is one of those critical races. She said the organization has spent more in this midterm election on Shapiro’s behalf than it has on any other candidate in its history because the election is “really kind of a do or die moment for a lot of progressive issues.” The differences between Mastriano and Shapiro on those issues, she said, are “really stark.”

A Democratic governor, she said, could be “the last backstop between us and some really devastating anti-environmental legislation.”

While a relatively small amount of money has gone toward independent expenditures to oppose Shapiro, much more has been doled out through traditional political spending.

A Democratic governor, she said, could be “the last backstop between us and some really devastating anti-environmental legislation.”

The conservative Commonwealth Leaders Fund, a political action committee largely bankrolled by a billionaire school choice advocate from the Philadelphia suburbs, ran several ads against Democrats, including Shapiro, over the summer. The fund stopped targeting the attorney general last month, around the same time Shapiro stated publicly that he would be open to using some taxpayer dollars to create direct scholarships to send children to private schools.

Though it is affiliated with a conservative-leaning pro-business league that does not have to publicly reveal its donors, the Commonwealth Leaders Fund follows the same disclosure rules as traditional PACs like the ones belonging to candidates or political parties.

According to the Commonwealth Leader Fund’s latest campaign finance report, it spent $4.5 million on television ads just between early June and mid-September alone. It is not clear how much of that was intended to blunt Shapiro’s chances.