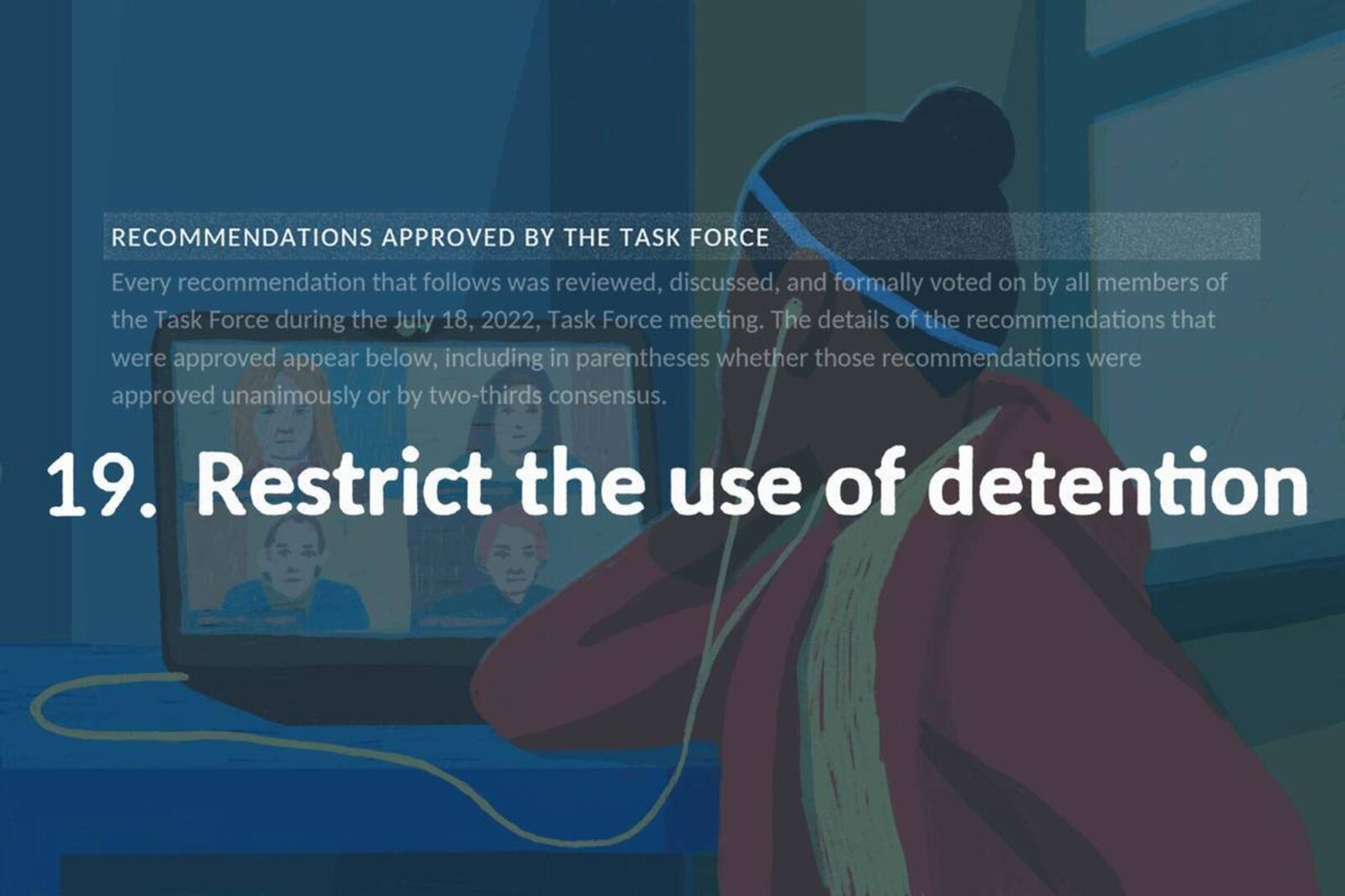 ProPublica is a nonprofit newsroom that investigates abuses of power. Sign up for Dispatches, a newsletter that spotlights wrongdoing around the country, to receive our stories in your inbox every week.

A Michigan task force Friday recommended a series of reforms designed to keep young people out of detention facilities and provide them with better legal representation and more community help, such as family counseling and mental health treatment.

Created after a ProPublica investigation revealed systemic flaws in Michigan’s juvenile justice system, the task force made 32 recommendations that aim to transform what happens when young people get in trouble with the law, including by keeping low-level offenses out of the courts and limiting when children can be detained. Other proposed changes would eliminate most fines and fees charged by juvenile courts and provide more oversight of residential facilities.

“The recommendations, if implemented, will be transformative to the justice system,” said Jason Smith, executive director of the Michigan Center for Youth Justice, an advocacy group. “It would expand the opportunities for alternatives to justice system involvement in the first place, increase transparency within the system with increased data and improve outcomes for young people.”

Michigan Gov. Gretchen Whitmer created the Task Force on Juvenile Justice Reform in June 2021 to analyze state and local data and gather individuals from across the state who have insight into the system. The task force’s goal was to try to understand why Michigan incarcerates so many young people for noncriminal offenses — and suggest ways to reduce the number. The task force was led by the nonprofit Council of State Governments and included the lieutenant governor, judges, court officials and families affected by the justice system.

“The recommendations, if implemented, will be transformative to the justice system. It would expand the opportunities for alternatives to justice system involvement in the first place, increase transparency within the system with increased data and improve outcomes for young people.” — Jason Smith, executive director of the Michigan Center for Youth Justice, an advocacy group

The creation of the panel came after a series of ProPublica stories about a 15-year-old who had been incarcerated for a probation violation when she failed to do her online schoolwork at the start of the pandemic. The reporting about the teenager identified as Grace, her middle name, put a national spotlight on how Michigan children are regularly detained for probation violations and other noncriminal offenses — even as many states have moved away from that practice.

ProPublica also revealed broader flaws in Michigan’s decentralized juvenile justice system, including such poor data that the state can’t say how many juveniles it has in custody at any given time or why they have been detained.

“I feel like Grace’s situation and the story really helped us get the momentum to get this started,” Michigan Supreme Court Justice Elizabeth Clement said in an interview this week. “It opened a lot of people’s eyes. … Sometimes people are unaware they have a broken system. Sometimes they know and they just are not sure what to do.”

Before Grace’s case drew national attention, Michigan leaders had been focused on reforming the adult criminal justice and child welfare systems. Juvenile justice had been less of a priority.

Many of the task force’s recommendations require changes in state law and additional funding.

Rep. Sarah Lightner, a Republican from Springport and a task force member, started that process this week when she introduced two bills intended to ensure young people have access to attorneys trained in juvenile matters. One bill would expand the Michigan Indigent Defense Commission to include the oversight and training of lawyers who represent juveniles and to ensure that young people have an attorney at every stage of their case. Another measure would expand the Michigan State Appellate Defender Office to include services for juveniles who want to appeal their cases. There are currently no state standards in place or specialized training available for lawyers representing juveniles and no state funding for juvenile defense.

“I feel like Grace’s situation and the story really helped us get the momentum to get this started. It opened a lot of people’s eyes. … Sometimes people are unaware they have a broken system. Sometimes they know and they just are not sure what to do.” — Michigan Supreme Court Justice Elizabeth Clement

“There is no question it will take an additional investment to make sure attorneys are educated and the courts are educated on juvenile issues,” Lightner said in an interview.

Michigan has long struggled to assess its juvenile justice system because it gathers limited data from its local courts, and that data is not captured in a standardized way. Data obtained by the task force from 32 counties, representing about 55% of the juvenile population, found that about 23% of cases referred to court by prosecutors were for a type of noncriminal offense that includes truancy, running away and incorrigibility. These “status offenses” are only punishable because the person is a minor. Another 26% of cases were for low-level misdemeanor offenses. Nearly 12% involved children 12 and under.

Data shared with the task force also showed that, in a sample of eight county courts, the average age of young people in secure detention — the most restrictive form of juvenile confinement — was 14 and that Black youth were detained at six times the rate of white youth. The panel recommended that the state collect and share data from the local courts, and use it to create a dashboard that tracks and measures disparities in the justice system.

The task force’s proposals aim to keep many of those young people out of the court system altogether. Except for the most serious offenses, the state’s juvenile courts would only be for children 13 and up if state law is changed; there’s currently no minimum age. Juveniles who commit status offenses and are determined to be low risk would be diverted to community programs instead of having to go through the court system.

“We have a long way to go in Michigan when it comes to how we support our children. The recommendations proposed are a step in the right direction.” — Cole Williams, a task force member who provides counseling and support to families involved in the court system in the Grand Rapids area

To encourage that change, one proposal would provide more state funding for community-based services — such as family counseling, mental health support and substance abuse treatment — than for detention and residential placements. Under the current system, the state’s Child Care Fund Unit reimburses counties 50% for all services. The task force proposed increasing the reimbursement for community-based services to 75%, which would require millions of dollars a year in additional state funding.

The panel also recommended that the state create a juvenile services division to develop standardized assessments so officials can match youth with the level of supervision they need. Michigan currently does not have a recommended assessment tool, and its decentralized court system means treatment for children can vary depending on where they live.

“That has led to some good practices in Michigan and some inconsistent and uneven and not research-based practices,” said Josh Weber, who directs the juvenile justice program at the Council of State Governments and worked with the task force.

Cole Williams, a task force member who provides counseling and support to families involved in the court system in the Grand Rapids area, said he’s glad that one recommendation would establish an advisory group of young people and families so they can help guide the justice system’s decisions. He also said that onerous fines and fees are a “constant conversation and challenge,” and eliminating them would be a game changer for families.

“We have a long way to go in Michigan when it comes to how we support our children,” said Williams, who experienced the challenges of the justice system when his son was involved in it. “The recommendations proposed are a step in the right direction.”

Jodi S. Cohen is a reporter for ProPublica, where she focuses on stories about schools and juvenile justice.

ProPublica is an independent, nonprofit newsroom that produces investigative journalism with moral force. We dig deep into important issues, shining a light on abuses of power and betrayals of public trust — and we stick with those issues as long as it takes to hold power to account.