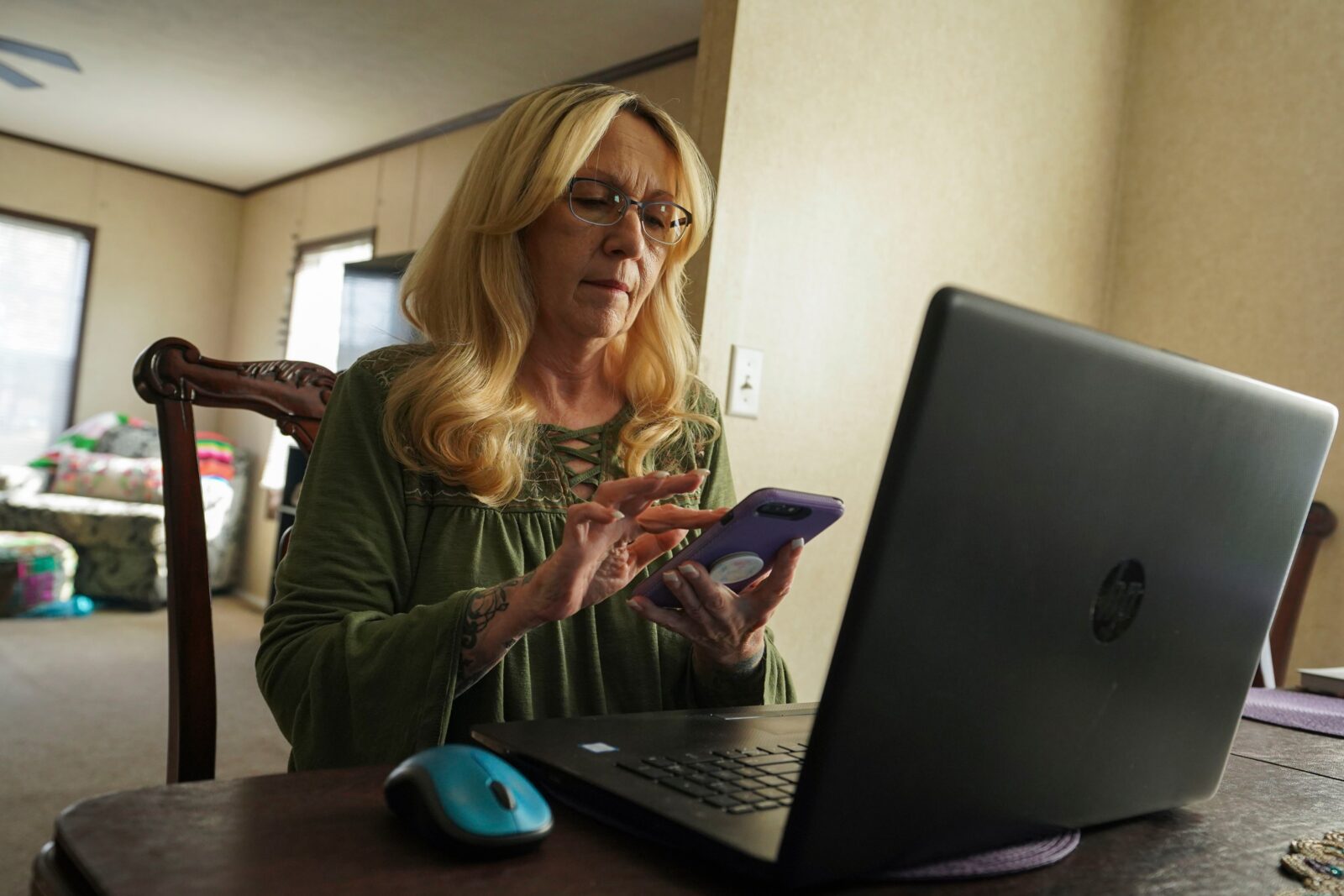 With preexisting conditions that limit her mobility and increase her risk of getting seriously sick from COVID-19, Cheryl Gibson of Schuylkill Haven relies on telehealth appointments. // Matt Smith / For Spotlight PA

HARRISBURG — Cheryl Gibson was in pain as she drove.

Eight months earlier, Gibson had begun an at-home breathing treatment for her emphysema when the mild headache she’d felt at the base of her skull exploded into debilitating pain. Her arm went numb, causing her to drop the nebulizer tube she’d been holding.

Gibson was sure she had suffered a stroke, but months of subsequent tests and scans have failed to identify the cause of the unpredictable pain she now experiences multiple times a week.

Without a way to know when an attack is coming, and with preexisting conditions that limit her mobility and increase her risk of getting seriously sick from COVID-19, Gibson relies on telehealth appointments to see her neurologist and other doctors.

But when she was referred to a pain management specialist, the office told her she’d have to come in person. Gibson drove 45 minutes one way from her home in Schuylkill Haven to the office in Tamaqua while monitoring a dull headache she hoped wouldn’t grow worse.

Her appointment that day lasted five minutes and did not include a physical evaluation.

“I’m not a big baby about stuff,” Gibson said. “But this is debilitating. I can’t function, I can’t do anything, and I can’t get behind the wheel of a car and drive because I don’t feel safe.”

The number of Pennsylvanians who have come to rely on phone and video appointments surged after the pandemic made in-person visits potentially dangerous. And many health-care providers and insurance companies quickly embraced telehealth as a necessary way of getting patients needed care.

But the state is one of only seven that does not have any law requiring private insurers to reimburse for telehealth, resulting in a patchwork system of care. Access to telehealth depends on someone’s insurance company or their specific insurance plan. Even if a patient has coverage, in some cases medical providers don’t provide telehealth because they have to determine eligibility for each of their patients, an onerous process resulting in uneven care.

All of that leaves Pennsylvania patients — especially those who need remote care the most, such as people in rural areas — confused, frustrated, and, at times, without services they need. 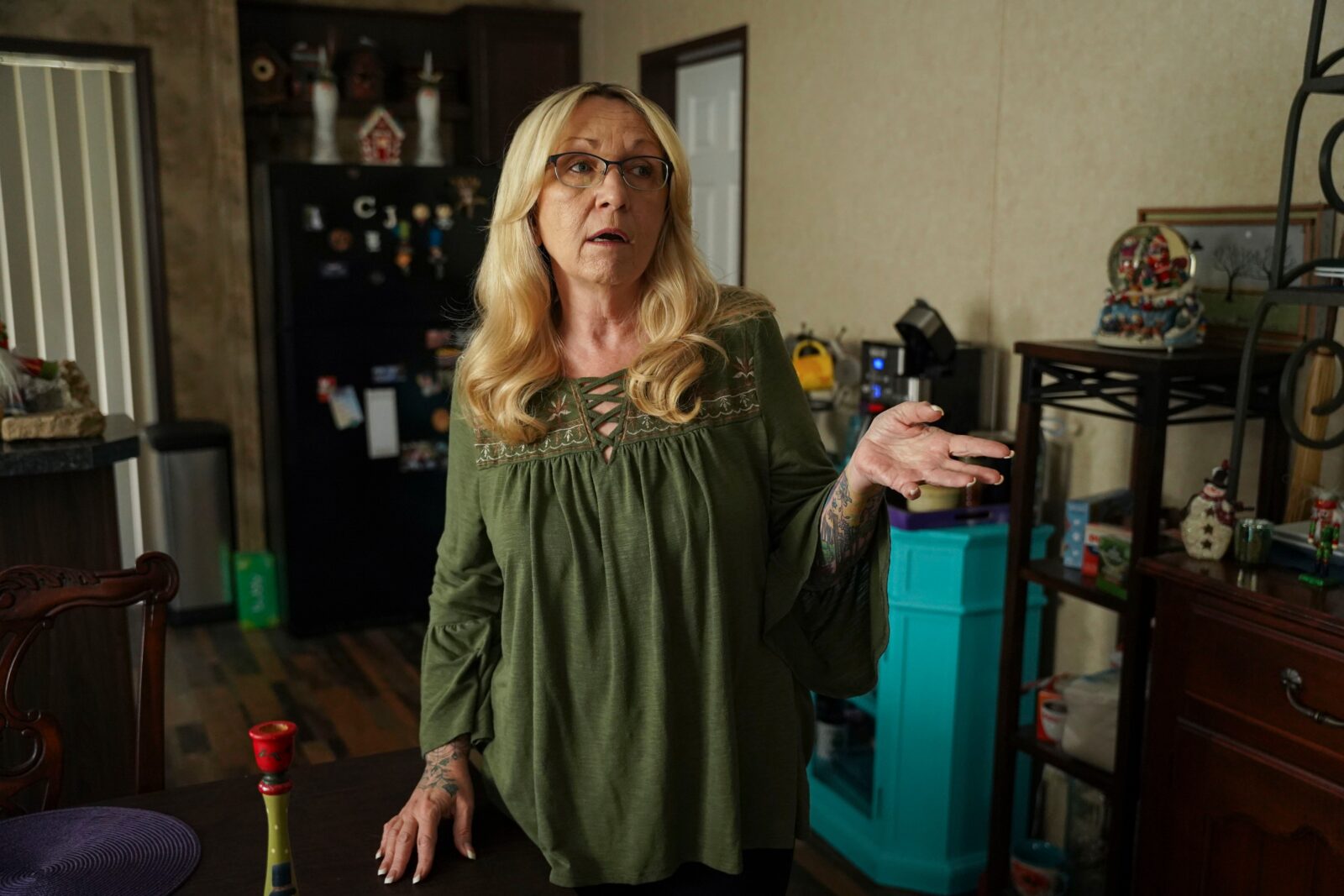 Cheryl Gibson of Schuylkill Haven has struggled with inconsistent telehealth care that she needs for treatment of ongoing health conditions. // Matt Smith / For Spotlight PA

“Pennsylvania is definitely a little bit of an anomaly in that,” said Kathy Hsu Wibberly, director of the Mid-Atlantic Telehealth Resource Center. “And strangely enough, there are so many states that have moved to creating laws and Pennsylvania has struggled.”

For the last five years, Sen. Elder Vogel (R., Beaver) has been trying to pass legislation that would allow the state to oversee health providers practicing remote medicine and explicitly require insurers to reimburse for it. But each year, the measure has failed.

In 2016, it never came out of committee. In 2018, it passed the Senate but died in the House. Last year, the bill passed both chambers, but Gov. Tom Wolf vetoed it after Rep. Kathy Rapp (R., Warren), who chairs the House Health Committee, amended it to prohibit providers from prescribing abortion-inducing medicine via telehealth.

Because there is no law mandating telemedicine in Pennsylvania, there’s nothing barring providers from practicing it, but insurers are not required to cover it. In other states, laws provide parity between in-person and remote health-care services.

Instead, insurance companies decide what kinds of telehealth appointments are covered based on their own policies and the agreements they may work out with health-care networks or individual doctors.

The process can be onerous for health-care providers that aren’t part of a broader network, Wibberly said, because each patient’s coverage may be different.

“What happens now in Pennsylvania is a patient will call the office and ask if they can have a telehealth visit and a provider will say no because they don’t want to have to go through all the checks on this particular insurer, and sometimes it’s not even the insurer, it’s plan by plan.”

This can result in providers declining telehealth services even when a patient’s insurance covers them. Gibson, who receives coverage through a private insurer under the Medicare program, recently called the company to set up a telehealth appointment after she felt a cold coming on.

“Being that I have the beginning of COPD, I need to nip that as soon as it happens,” she said.

The first doctor she connected with over the phone refused to treat her.

“They told me they can’t talk to me about anything like that, that’s not what telehealth is for,” she said.

A second doctor wouldn’t prescribe her medicine over the phone.

The next day, a call with a third doctor finally resulted in a prescription.

While a vital tool, telehealth has its limitations, according to patient advocates, especially for people with disabilities or those who lack access to technology.

“Telehealth in many ways has been helpful in getting additional attention on medical needs, but it’s not a catchall, it’s not a panacea,” said Patrick Keenan, the director of consumer protections and policy for the Pennsylvania Health Access Network.

Still, patients and providers across Pennsylvania have come to rely on telehealth to access care they otherwise wouldn’t be able to — despite the lack of clear regulation.

Maria and Peter Welsh, a couple from Allentown, tried driving their son Robert two hours to his specialist appointments after he suffered a traumatic brain injury while driving home for Thanksgiving last year. But Robert’s injury made the changing light and the movement of the car intolerable, and the pandemic made leaving the house risky for Peter and Maria, who are in their 80s. Robert now sees his doctor every few weeks via video call.

“It’s a big thing for people in our situation,” Peter Welsh said.

Jerry Webb, a Williamsport resident, said his son, nephew, and brother all relied on telehealth during the pandemic, when offices were closed and they couldn’t get care for their intellectual disabilities. Even as offices have reopened, Webb helps his family members call their doctors to do wellness checks.

And in Warfordsburg, Caitlyn Morrell sets up video visits with her patients, who have few options for health care in rural Fulton County. Morrell, a traveling nurse-practitioner, uses the initial calls to triage her patients’ needs, she said.

“Then I can decide what supplies I need to bring, what swabs I need to have,” she said. “It just kind of gives me an idea or ballpark so I’m not bringing the whole office to them.”

“Telehealth in many ways has been helpful in getting additional attention on medical needs, but it’s not a catchall, it’s not a panacea.” — Patrick Keenan, Pennsylvania Health Access Network

Right now, most insurers are paying for telehealth, said Sam Marshall, president of the Insurance Federation of Pennsylvania, a lobby for the industry. Insurers have worked with hospitals and health networks to develop their own standards on how to provide telehealth to patients, and Vogel’s legislation would codify those standards, Marshall said.

“I can say that as a general rule of thumb, telemedicine isn’t going away,” he said. “We have not been brought kicking and screaming to the world of telemedicine. It’s something we as insurers have been promoting ourselves.”

But without regulations, there’s no guarantee to care, experts said.

“The challenge with it is the payment for the services,” said Lisa Davis, director for the Pennsylvania Office of Rural Health at Pennsylvania State University. “There has been a tug between the providers — the hospitals and the clinics and the payers — in terms of what is considered to be telehealth and how it will be paid.”

The Pennsylvania Department of State implemented a temporary policy at the beginning of the COVID-19 pandemic that explicitly allows licensed health-care providers to practice telemedicine, but that waiver expires in March.

Vogel’s bill passed the Senate in October. Legislators referred it to the House Insurance Committee rather than the Health Committee, which Rapp chairs, “a good sign,” Vogel said.

There is talk in the Senate about drafting a separate piece of legislation to address the abortion issues that tanked his bill last year, he said.

Rep. Tina Pickett (R., Bradford), who chairs the House Insurance Committee, said legislators are still consulting with stakeholders regarding the legislation and a committee vote hasn’t been scheduled. Rapp, who amended the bill last year to prohibit abortion care, didn’t respond to a question asking whether she plans to pursue the same amendment this session.

“These drugs have no place in my legislation,” Vogel said. “My bill is setting up guidelines, what providers provide, and what insurance companies pay for. I think that’s what’s going to finally happen.”