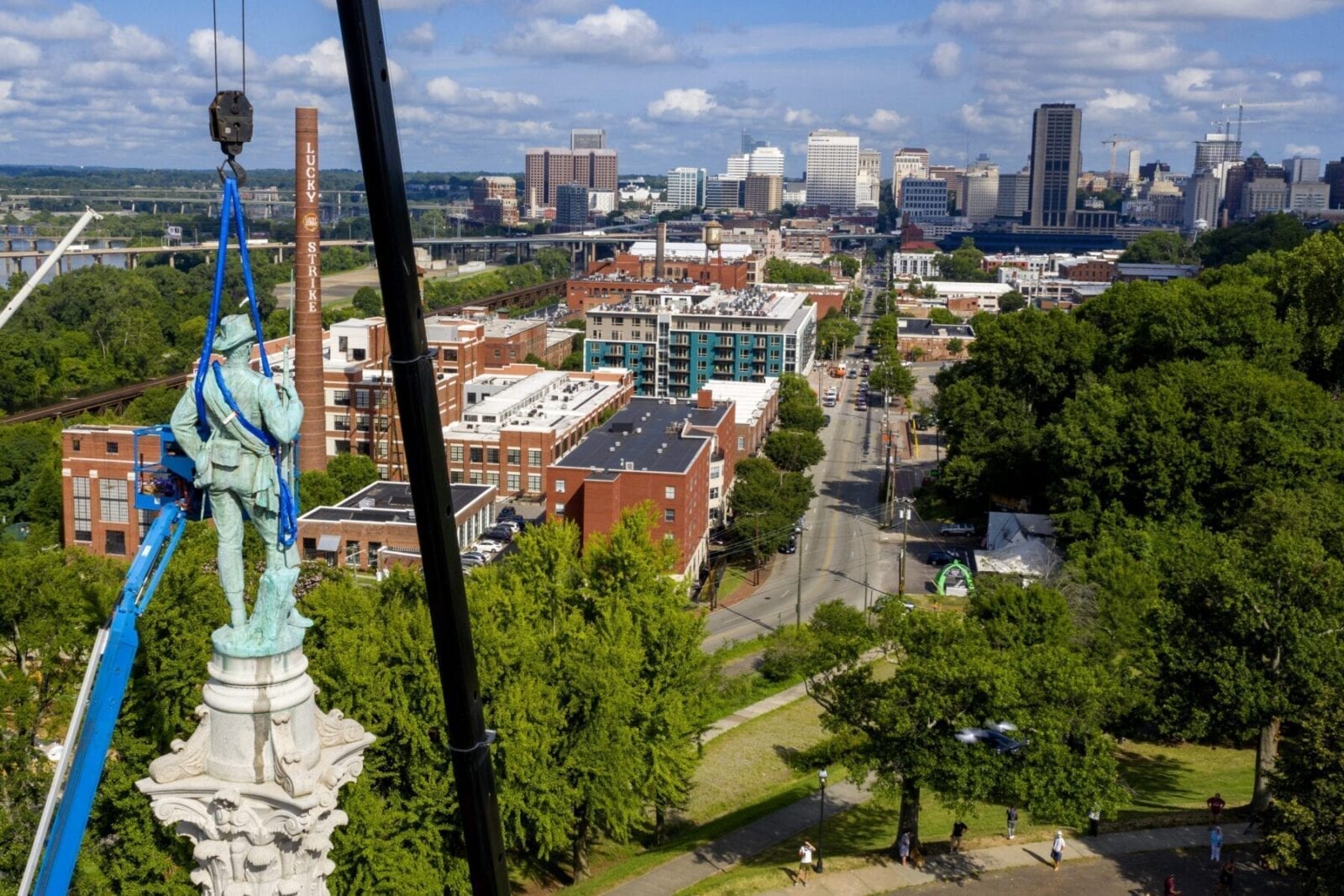 Crews work to remove the Confederate Soldiers & Sailors Monument in Libby Hill Park on July 8 in Richmond, Va. The statue is one of several that will be removed by the city as part of the Black Lives Matter reaction. Survivors of police brutality in Chicago are waiting for a memorial city officials approved five years ago. (AP Photo/Steve Helber)

This story was originally published by ProPublica

It took some time for Vincent Wade-Robinson to come around to the idea of having his name inscribed on a memorial. His experience had been painful. He didn’t want to dwell upon it.

“How can you describe torture?” he asked me. “Every day I look in the mirror I have that scar across my nose. That’s my reminder of what happened to me.”

But he eventually decided that a memorial would be an important public acknowledgment that he and others were wronged. Five years later, he’s still waiting.

The memorial is part of the first municipal reparations package in the country to address police violence. This initiative, approved  by the city of Chicago in May 2015, is designed to address the wrongs perpetrated in what is perhaps the nation’s longest running police brutality scandal. For almost two decades, from the early 1970s to the early 1990s, former Chicago police Cmdr. Jon Burge led a crew of officers who tortured more than 125 individuals, most of them Black, into confessing to crimes that many, like Wade-Robinson, say they did not commit.

Burge, who denied mistreating suspects, was convicted in federal court of perjury and obstruction of justice for lying under oath about the torture and was sentenced to 4 ½ years in prison. He died in 2018.

“Every day I look in the mirror I have that scar across my nose. That’s my reminder of what happened to me.”

The $5.5 million reparations package included a formal apology from former Chicago Mayor Rahm Emanuel, financial compensation to survivors and their families, waived tuition to City Colleges, a mandatory Chicago Public Schools curriculum to educate students about police torture under Burge, and the creation of a permanent, public memorial.

As monuments across the country are being toppled or removed because of their ties to the Confederacy or other racist legacies, the creation of this memorial is the sole requirement of the reparations package that remains unfulfilled.

“They admitted that they did wrong by us,” said Wade-Robinson, who served 31 years in prison for convictions for murder, robbery and home invasion, crimes he said he falsely confessed to after detectives punched him and hit him in the face with a flashlight. “But they’re stumbling over their feet to do right by us.”

There are a number of explanations for why the memorial remains unbuilt. Joey Mogul, a lawyer at the People’s Law Office and co-founder of Chicago Torture Justice Memorials, which advocated for the reparations, attributed some of the delay to the organization’s commitment to involve a community of survivors, family members, artists, educators and activists in the memorial’s design.

But money and politics have also played roles. Though the memorial was part of the reparations package, Emanuel did not commit funds to building it before he left office. A transition committee for Mayor Lori Lightfoot recommended that she fund the memorial within her first 100 days of office, but more than a year later, that hasn’t happened.

In a statement, a spokesperson for the mayor said the city is committed to continuing to work “on proposals for a memorial that honors the victims of injustice.”

But it is unclear where the city stands on its commitment to creating a specific memorial to recognize Burge survivors and acknowledge the violence they suffered at the hands of police. A spokesperson did not respond to questions on whether the city favors creating a memorial that’s more broadly themed around injustice or one specific to Burge survivors.

“We want to show a continued fight for justice.”

Advocates for the memorial say its specificity is important. Mogul said that the memorial would help establish the experiences of survivors and families, “who repeatedly told [the] truth and were always told they were lying” about the torture, as the dominant narrative of how the city remembers a shameful part of its past.

“We need the public memorial to ensure their truth is sealed,” Mogul said.

Anthony Holmes, 74, who served 30 years in prison for a murder he said he did not commit and later testified against Burge at the former police commander’s trial in federal court, said the city’s delay in creating the memorial hurts.

“They’ve got other histories up,” Holmes said, referring to other memorials and monuments around Chicago, some of which have been debated for decades. Among them: an 1895 monument to Confederate prisoners of war in Oak Woods Cemetery on the South Side and a 1934 monument to Italian fascist Italo Balbo along the lakeshore (Two Chicago aldermen proposed an ordinance to rename Balbo Drive in honor of Black journalist and anti-lynching activist Ida B. Wells in 2018. The city instead renamed a portion of Congress Parkway after Wells).

More recently, there’s been a push to add one more S to Douglas Park, effectively renaming it in honor of Frederick Douglass, the Black abolitionist and scholar, rather than Stephen A. Douglas.

The Logan Square neighborhood, too, is named after Union Army Gen. John A. Logan, who helped pass a measure in 1853 that for a time criminalized the settlement of Black people in Illinois. A large monument to Logan stands in Grant Park downtown.

“These things took place and we honored them,” Holmes said. “They won’t honor us and I don’t understand this because we’re the ones that suffered.”

If and when the city decides to move forward with the memorial, there is a design for the structure. After years of gathering more community input, exhibits, research and the solicitation of Chicago artists, a panel of jurors — which included Wade-Robinson and Holmes — approved in April 2019 a design by Chicago artist Patricia Nguyen and architectural designer John Lee.

“We don’t want a memorial that says the city has dealt with it and the city moved on,” Nguyen said. “We want to show a continued fight for justice.”

“Breath, Form & Freedom,” a 16,000-square-foot spiraled hallway that features the names of the Burge survivors, leaves space to add the names of future victims of police violence, Nguyen said. The memorial is estimated to cost about $750,000, according to Chicago Torture Justice Memorials.

Nguyen said she and Lee designed the structure to be used as a timeless gathering space for reflection and imagination, much as, she said, people have recently taken over some sites of Confederate monuments, including a street in Richmond, Va., that has become a popular spot for high school graduation photos, community barbecues and even basketball games among statues now covered in graffiti and impromptu public art.

Lee, the architectural designer, said he hopes the exposed structure of the memorial invites people to question the structural roots of racism and police violence.

The circular gathering space in the memorial’s center is also roofless. Nguyen said that by leaving a view of the sky, she hopes it gives people space to feel like they can breathe, a reminder of the words of Eric Garner, and most recently George Floyd, and the long history of those who have been suffocated by police.

The location of the memorial remains undecided. But Wade-Robinson has an idea. Rather than putting it in a neighborhood on the South Side where he says “nobody will see it,” he’d like to see the memorial in a high-traffic area downtown or “right in front of the police headquarters.”

“You think they want to see something symbolizing a disgrace to their Chicago Police Department?” Wade-Robinson said. “Let’s be for real.”

Logan Jaffe is the engagement reporter for ProPublica Illinois, a nonprofit investigative newsroom. Reach her at Logan.Jaffe@propublica.org.