HARRISBURG — The legislature was on break. Policymaking in the Capitol had ground to a halt. But State Rep. Chris Sainato was about to cash in — again.

It was early August 2019, and the Pennsylvania lawmaker from Lawrence County was off to Nashville to meet with other legislators from across the country. Later that month, his travels took him to Harrisburg, then Coatesville, Lewistown, State College, Erie, back to Harrisburg, and around a smattering of towns near Pittsburgh.

Sainato’s tab for his travels — paid for by taxpayers — included more than $1,950 in mileage, parking, and other transportation costs, and just shy of $3,000 in a special perk called per diems, which are flat-rate payments legislators can claim without receipts whenever they travel more than 50 miles outside their districts. 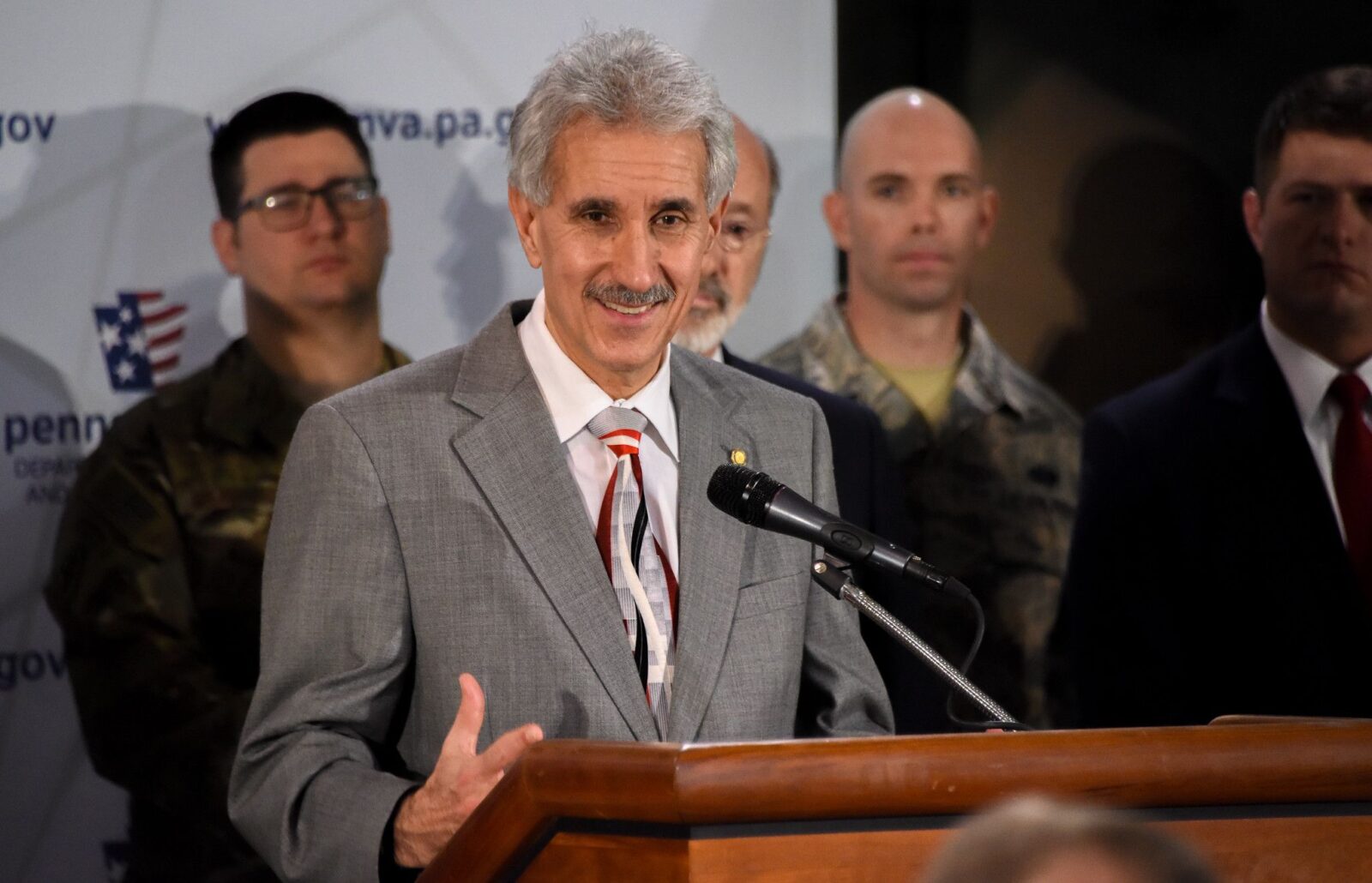 “I can’t believe that,” Rep. Chris Sainato said in a recent interview when told of his expenses. “I don’t know where you are getting $1.8 million.” (Tom Cherry / Pennsylvania Department of Military and Veterans Affairs)

The Western Pennsylvania Democrat, who prides himself on never missing a day of work, says those expenses are just part of doing the people’s business.

Turns out, that business can also be incredibly lucrative.

From when he was elected to the House in late 1994 to mid-January of this year, Sainato spent or has been reimbursed personally for more than $1.8 million in mileage, meals, lodging, travel, and office-related costs — including nearly $640,000 in per diems — all charged to taxpayers, according to an analysis of expense records by The Caucus and Spotlight PA as part of their ongoing investigation, The Hidden Tab.

Adjusted for inflation, the total amounts to more than $2.2 million.

During that same time, Sainato and other lawmakers — who make up the largest full-time legislature in the nation — have received near-annual cost-of-living increases, and are today among the best paid in the U.S. In 2020, Sainato was paid a salary of $90,335, plus $21,951 in expense reimbursements and $30,746 in per diems, most of which he collected during the pandemic, with the state’s economy at a standstill and millions out of work.

“I can’t believe that,” Sainato said in a recent interview when told of his expenses. “I don’t know where you are getting $1.8 million.”

Sainato’s party has been in the minority for almost his entire tenure in the legislature, and he has been the primary sponsor on only two bills that have become law, according to the Legislative Reference Bureau of Pennsylvania.

In many categories of spending examined by the news organizations, Sainato’s expenses eclipsed those of most of his colleagues, not because he spent extravagantly on office furniture, staff salaries, or gifts for constituents — but because of his uniquely on-the-go style of legislating.

In an interview, Sainato, 62, attributed his expenses in large part to never having missed a day of work. “A perfect record, inspired by you,” he wrote in a newsletter to constituents last fall.

“This is all I do. I have not missed a day,” said Sainato, noting that he is a bachelor and among the longest-serving legislators in the chamber. “This is the only job I have. … Every time I am supposed to be there, I go.”

Even during the pandemic, when many of his House colleagues took advantage of new rules allowing remote voting for the first time, he was there every session day — and collecting his per diem. Sainato said it was his duty to show up.

His expenses are part of the hidden costs charged to taxpayers to support Pennsylvania’s legislature. Each year, lawmakers are collectively paid millions of dollars just to drive to work, stay at work, eat at work, then drive home from work — benefits that most of their constituents do not enjoy. Other perks come in the form of dinners paid for by lobbyists and industry groups, gifts with no monetary limit (as long as they are reported), and access to campaign accounts that can be used for nearly any expense, such as meals, travel, and even shoes.

The expenses are spread across an array of legislative accounts that are largely shielded from the public. The Caucus and Spotlight PA, as part of a yearlong investigation into legislative spending, acquired and analyzed nearly 400,000 legislative expenses from 2017 to 2020. Sainato was near or at the top of the list for per diems for meals and lodging, and reimbursements for mileage and other transportation costs.

In response to the reporting, top GOP leaders in both the House and the Senate have said they are working on a plan to make most lawmaker expenses available on a publicly accessible website. One senator, Democrat Lindsey Williams of Allegheny County, said she will be introducing a bipartisan bill to require expense transparency.

As part of their ongoing investigation, the news organizations requested all of Sainato’s expenses dating back to his first day in office to mid-January 2021. Those records revealed a fairly consistent spending pattern over 2½ decades. Accounting for inflation, he has spent an average of about $86,000 in tax dollars per year since 1995.

Beyond regular office costs like district office rent and supplies, the expenses show Sainato over the years traveled to nearly two dozen out-of-state conferences and spent weeks out of every year visiting dozens of Pennsylvania towns for hearings, tours, ceremonies, and other events.

“That’s absolutely morally wrong and people know that,” said former Rep. Katie True, a Republican from Lancaster County who during her time as a state legislator eschewed many of the perks of the job. “The whole system has to fundamentally change.”

Sainato, the records show, received almost $162,000 in mileage and more than $175,000 in other transportation costs, including gas, parking, and tolls.

Even at the height of the recession in the late 2000s, when legislators were slashing billions of dollars from the budget, Sainato did not scale back his spending. During the 19-month period between December 2007 and June 2009, the Democrat claimed $120,226 in overall expenses. Of that money, $49,448 went to Sainato in the form of per-diem reimbursements.

Per-diem rates vary depending on the time of year and whether lawmakers are traveling for a voting or nonvoting session. Pennsylvania rates are among the more generous in the country, according to an analysis by the National Conference of State Legislatures.

That is in part because legislators in the state are allowed to claim such payments, albeit smaller in dollar amount, not just when they come to the Capitol to vote, but for any business or travel related to their jobs on so-called non-session days. And the per-diem clock starts running the moment they leave their homes.

Because Sainato’s Western Pennsylvania district is among the farthest from the Capitol — about 262 miles — he has said he often has to leave for Harrisburg the day before a voting session and return the day after, allowing him to collect more days’ worth of per diems.

Records show that is only half the story.

Sainato also received $372,140 worth of “non-session” per diems as part of 2,621 claims made over 25 years — an average of about 105 traveling days every year. That is roughly twice the average number of voting days in the Capitol in any given year.

Many of his non-session per diems were for legislative hearings and other events around the state, but several were for tours on or near the Capitol grounds on days the legislature was on break.

On May 29, 2012, for instance, when lawmakers had recessed for a week between voting days, he collected a $163 non-session per diem for touring the state’s Medal of Honor Memorial, less than a minute’s walk from the Capitol. It was a tour he had taken less than a year earlier, in July 2011, according to expense records.

Crisscrossing the state to attend Democratic policy committee meetings was another reason Sainato’s non-session per diems were so high. Both Republicans and Democrats in each chamber run such committees, which have no voting power but instead meet to discuss issues or policies that are important to their political party.

Records show he attended at least 634 policy committee hearings — though the vague nature of the records makes it impossible to nail down the exact number — for which he received $107,338 since he became a legislator.

He also collected “non-session” per diems when he traveled out of state for conferences.

In 2002, for instance, Sainato took his first out-of-town trip to New Orleans for a meeting of the National Council of Legislators from Gaming States. At the time, casino gambling was not yet legal in Pennsylvania.

For his four-day stay, he submitted $567 in non-session per diems. Expense records do not explain what that money went to cover — nor does his caucus require an explanation.

Since then, he has attended 22 conferences outside of Pennsylvania, including in South Beach, Fla.; Scottsdale, Ariz.; Seattle; and San Francisco and Napa, Calif., collecting $19,200 in non-session per diems, expense records show. That does not include registration and other transportation fees related to the trips.

Over the last two decades, good-government advocates, along with a handful of lawmakers, have been critical of everything from lawmakers’ high salaries to the other perks of the job. Per diems, in particular, have been a sore point, with many pushing to abandon them in favor of a system of reimbursing for actual expenses.

But year after year, efforts have stalled due to inaction and the fact that any changes are left up to lawmakers — the exact same people benefiting from the perks.

While more transparency is part of the solution, True, the former GOP lawmaker, said basic changes are needed to lawmakers’ expense accounts.

“A blanket per diem? How do you check on that?”

When asked whether documenting actual expenses would be preferable, he said it would be a hindrance to getting things done “for people like me who are very busy.”