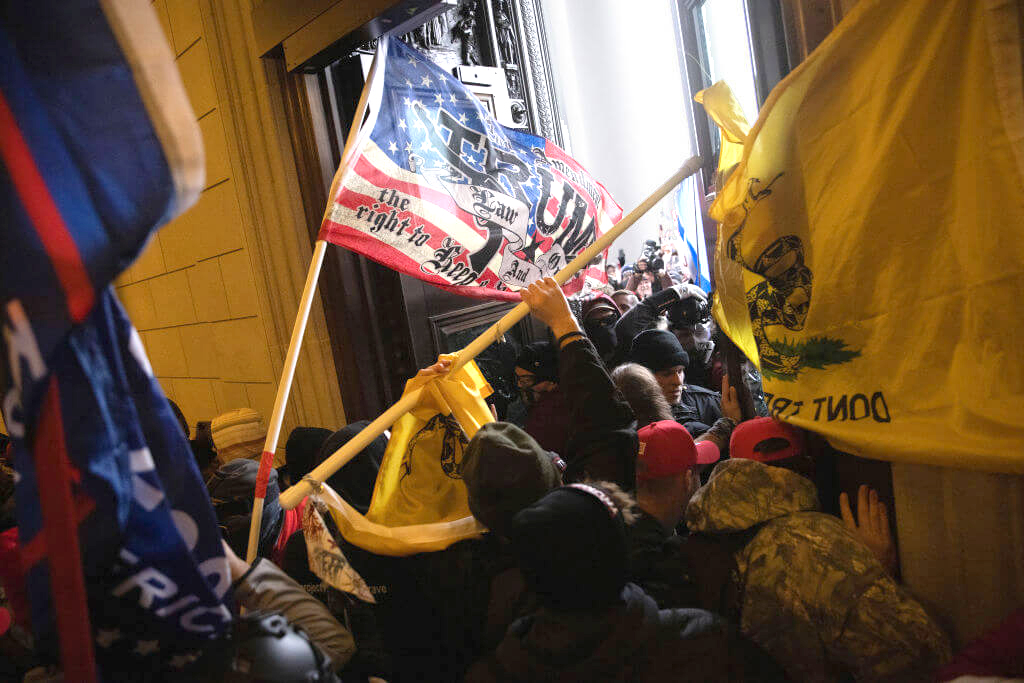 A pro-Trump mob breaks into the U.S. Capitol on Jan. 6, 2021, in Washington, D.C. Congress held a joint session that day to ratify President-elect Joe Biden’s 306-232 Electoral College win over President Donald Trump. A group of Republican senators said they would reject the Electoral College votes of several states unless Congress appointed a commission to audit the election results. // Photo by Win McNamee/Getty Images

The U.S. House committee investigating the Jan. 6 attack on the U.S. Capitol in a historic vote agreed unanimously Monday to refer former President Donald Trump and others to the Justice Department for potential criminal charges, including inciting or aiding an insurrection.

The panel also referred four House Republicans to the House Ethics Committee for refusing to testify: Andy Biggs of Arizona, Jim Jordan of Ohio, Scott Perry of Pennsylvania and California’s Kevin McCarthy, who is likely to become the next speaker when Republicans take control of the House in January.

Before taking the unprecedented step of referring a former president for criminal charges, the bipartisan panel recapped in its final public meeting its findings that Trump engaged in a multipart plan to overturn the 2020 presidential election, culminating in the deadly attack on the Capitol that shook a bedrock of the nation’s democracy.

The Justice Department, which is already investigating Trump’s conduct related to the 2020 election, will determine how to pursue the referrals.

In a post to his own social media network on Monday, Truth Social, Trump promoted another Dec. 9 post that linked to his video on Jan. 6 telling supporters to leave the Capitol. Committee members said that video came after more than three hours of inaction as Trump watched the attack.

The committee’s seven Democrats and two Republicans all voted to refer Trump for criminal charges on four counts:

Trump led a multipart effort to overturn the election, they said.

He claimed victory despite knowing he lost the election, pressured state and federal officials to promote his lie that the election results were fraudulent, summoned his supporters to the nation’s capital on Jan. 6, 2021, and incited them to attempt to violently block the certification of election results.

Trump then sat in the White House dining room and watched as the attack unfolded, members of the panel said.

“At the heart of our republic is the guarantee of the peaceful transfer of power,” Cheney said.

“Every president in our history has defended this orderly transfer of authority, except one. Jan. 6, 2021, was the first time one American president refused his constitutional duty to transfer power peacefully to the next … The Select Committee has recognized our obligation to do everything we can to ensure this never happens again.”

The committee released the 154-page executive summary Monday, though the full report is not expected to be made public until later this week. 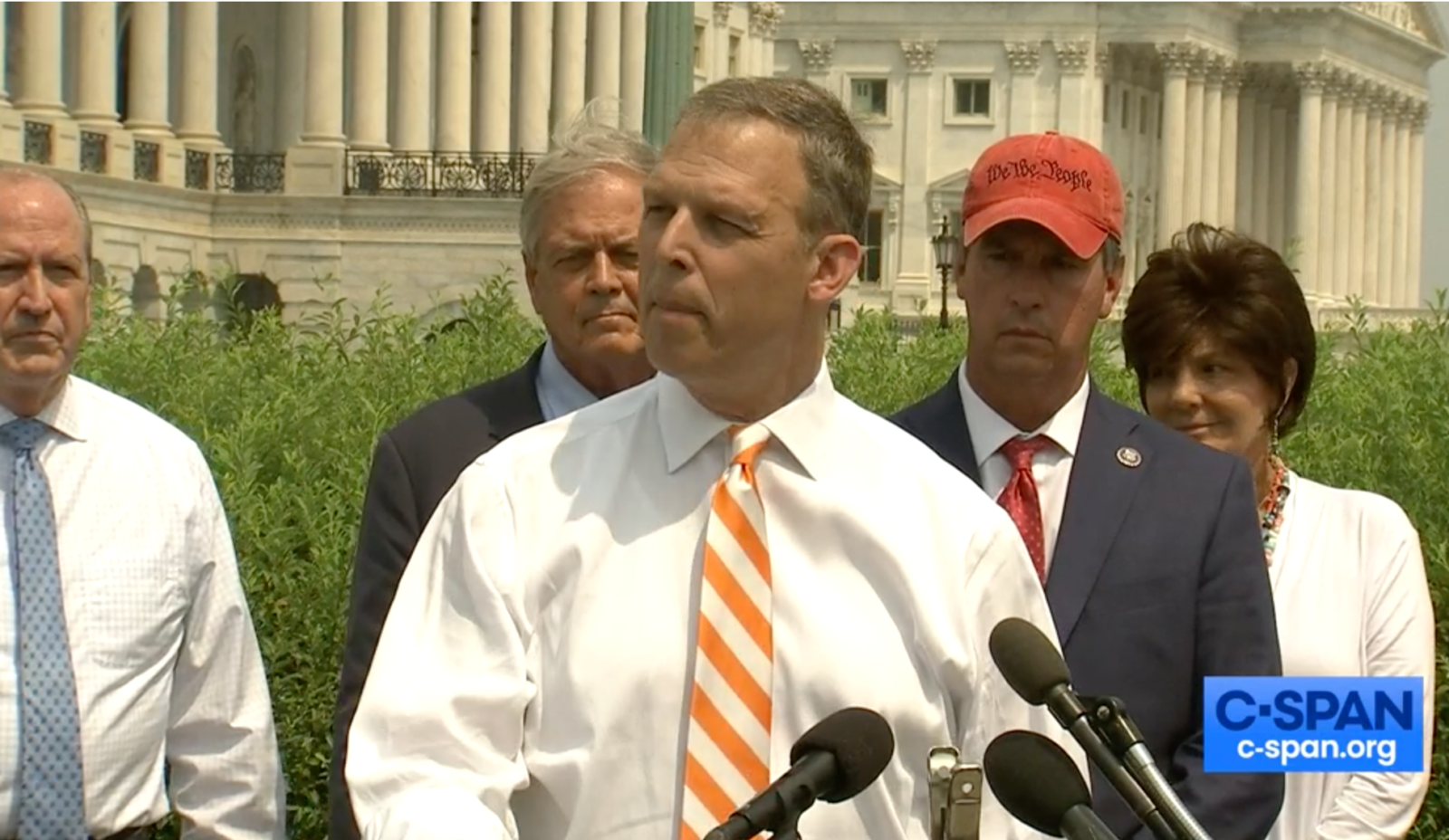 Those members “had materially relevant communications” with Trump on Jan. 6 and the days leading up to the attack, and withheld that information from the panel, the committee said.

In an email, a spokesman for Jordan dismissed the accusation.

“This is just another partisan and political stunt made by” the committee, Jordan spokesman Russell M. Dye wrote Monday.

It would be up to the ethics panel, which is evenly divided between Democrats and Republicans, to decide whether to proceed with an inquiry into the four members who were named.

Chairman Bennie G. Thompson, a Mississippi Democrat, said Trump violated the basis of U.S. democracy and that criminal referrals were important to seek accountability and ensure that a similar insurrection on the U.S. government is never attempted again.

“Evidence we’ve gathered points to further action beyond the power of this committee or the Congress to help ensure accountability under law, accountability that can only be found in the criminal justice system,” Thompson said.

While hundreds of Trump supporters who mobbed the Capitol that day have been charged, U.S. Rep. Jamie Raskin, a Maryland Democrat and committee member, said Trump should also face charges

“Ours is not a system of justice where foot soldiers go to jail and the masterminds and ringleaders get a pass,” he said.

The committee’s recommendation for two of the criminal charges, conspiracy to defraud the United States and conspiracy to make a false statement, centered on the scheme to use slates of false electors from states that Trump lost in 2020: Arizona, Georgia, Michigan, New Mexico, Nevada, Pennsylvania and Wisconsin.

Some 84 Republicans, including dozens of party leaders, signed on to the bogus documents.

“These intentionally false documents were transmitted to multiple officers of the federal government,” U.S. Rep. Adam Schiff, a California Democrat, said. “And were intended to interfere with the proper conduct of the joint session, where the existence of so-called competing slates of electors would serve as a pretext for legitimate electoral votes to be rejected.”

In a statement following the panel’s meeting, House Speaker Nancy Pelosi praised the committee’s work and appeared to call for the Justice Department to prosecute Trump.

“With painstaking detail, this executive summary documents the sinister plot to subvert the Congress, shred the Constitution and halt the peaceful transfer of power,” Pelosi said.

“The Committee has reached important conclusions about the evidence it has developed, and I respect those findings.

“Our Founders made clear that, in the United States of America, no one is above the law. This bedrock principle remains unequivocally true, and justice must be done.”

Jacob Fischler covers federal policy as a senior reporter for States Newsroom. Based in Oregon, he focuses on Western issues. His coverage areas include climate, energy development, public lands and infrastructure.