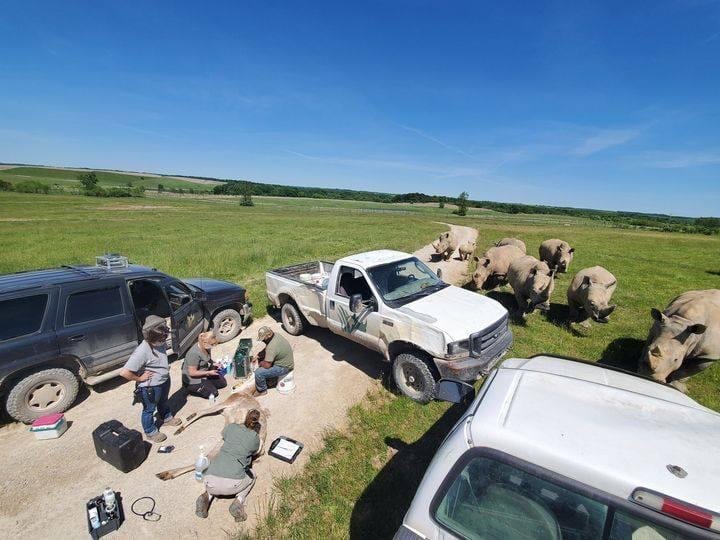 A virtual peek at jobs in conservation through The Wilds, in which people can learn more about careers in animal conservation. (Facebook)

“There’s no such thing as bad weather, only bad clothes.”

Whether or not you subscribe to this oft-repeated Scandinavian wisdom regarding the importance of proper cold-weather wear, its message rings true. When heading outside this winter, you’d best dress warmly, lest your extremities be frosty, as well as your disposition.

Enjoying the outdoors this winter is more important than ever. With COVID-19 surging around the region, and the subsequent shutdowns, we’re all going a little stir crazy.

Brisk air and snow-covered natural tableaus are just the remedy to shake off the sluggishness resulting from too much time on the couch. And with most folks not heeding this advice, there’s plenty of space to stretch your legs and spread out amid the great outdoors.

So go for a long hike, be it close to home or someplace you can travel to safely. Take in the snow-capped beauty of Appalachian mountains and forest trails. Check out the wintry, windswept plains of the Midwest, explore some caves in the Bluegrass State, or find your inner speed demon in Western New York.

And once you’re worn out, curl up next to a cozy fire in a remote cabin and fall asleep to the sounds of howling winter winds and rustling woodland creatures.

Here are just some of the locales we hope to hit this winter. If you have others you enjoy, tell us about them at: editorial@postindustrial.com.

There’s loads to do this winter in Postindustrial America. So throw on extra layers and a warm cap. It’s time to get out!

Shred those slopes … in the Buckeye State

The slopes at Mad River Mountains, near Columbus, Ohio. (Facebook)

Yes, there is skiing in Ohio.

Located just an hour northwest of Columbus, Mad River Mountain is 1,460 feet tall at its “peak” and offers a series of runs for all skill sets. In all, there are 23 runs for skiers and snowboarders, plus a tubing park and more.

Mad River set to reopen Dec. 19 with limited capacity due to virus restrictions. With only a fraction of its normal capability allowed, be sure to reserve your time on the slopes early.

“The Wilds”: A real Midwestern safari 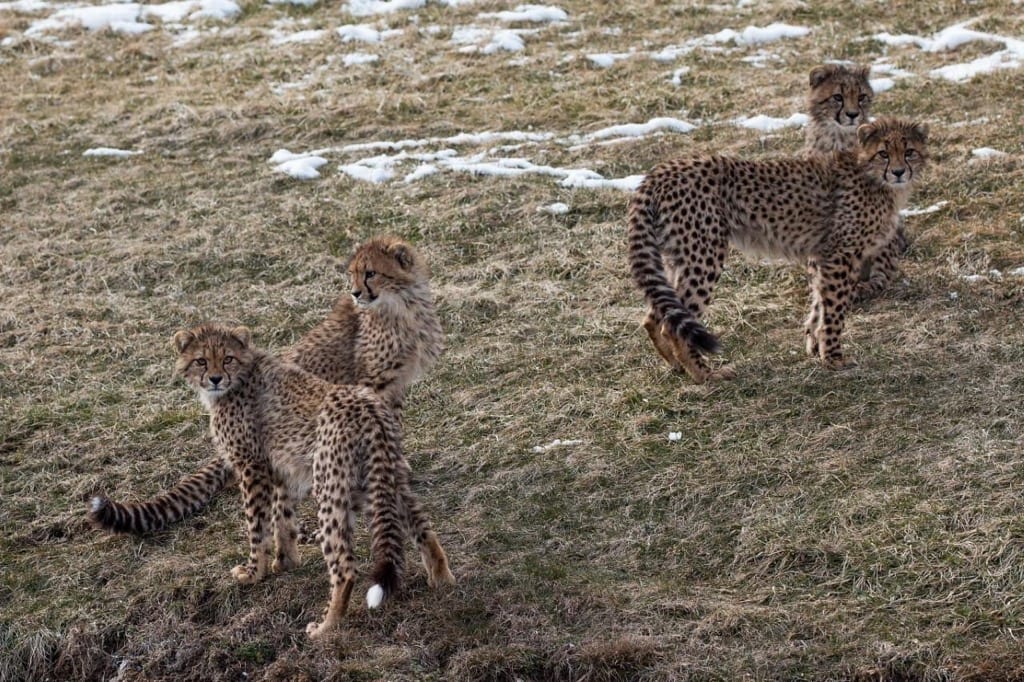 Cheetahs at The Wilds, a drive-through nature preserve in Columbus, Ohio. (Facebook)

You’ll want to bundle up for this two-hours-plus, open-air-vehicle-with some-walking-included tour of The Wilds, a 9,000-acres-plus natural preserve “safari experience” partnered with the Columbus Zoo (thewilds.columbuszoo.org)

The tours operate year-round and include some up-close interactions with a variety of fauna from around the world living in a wide-open expanse approximating their native habitats.

This unique take on zoo exhibits simulates the safari experience with animals hailing from several continents and climates, so be prepared for some critters to remain indoors during the coldest months. But for those non-native animals that can handle the cold, this is the best way to see how they manage to keep from shivering when the mercury drops.

There are even overnight accommodations at The Wilds — a series of bungalows that come with personal observation decks that let you take in the wildlife at your own leisure.

With COVID-19 cases spiking, it would be wise to check ahead for availability. 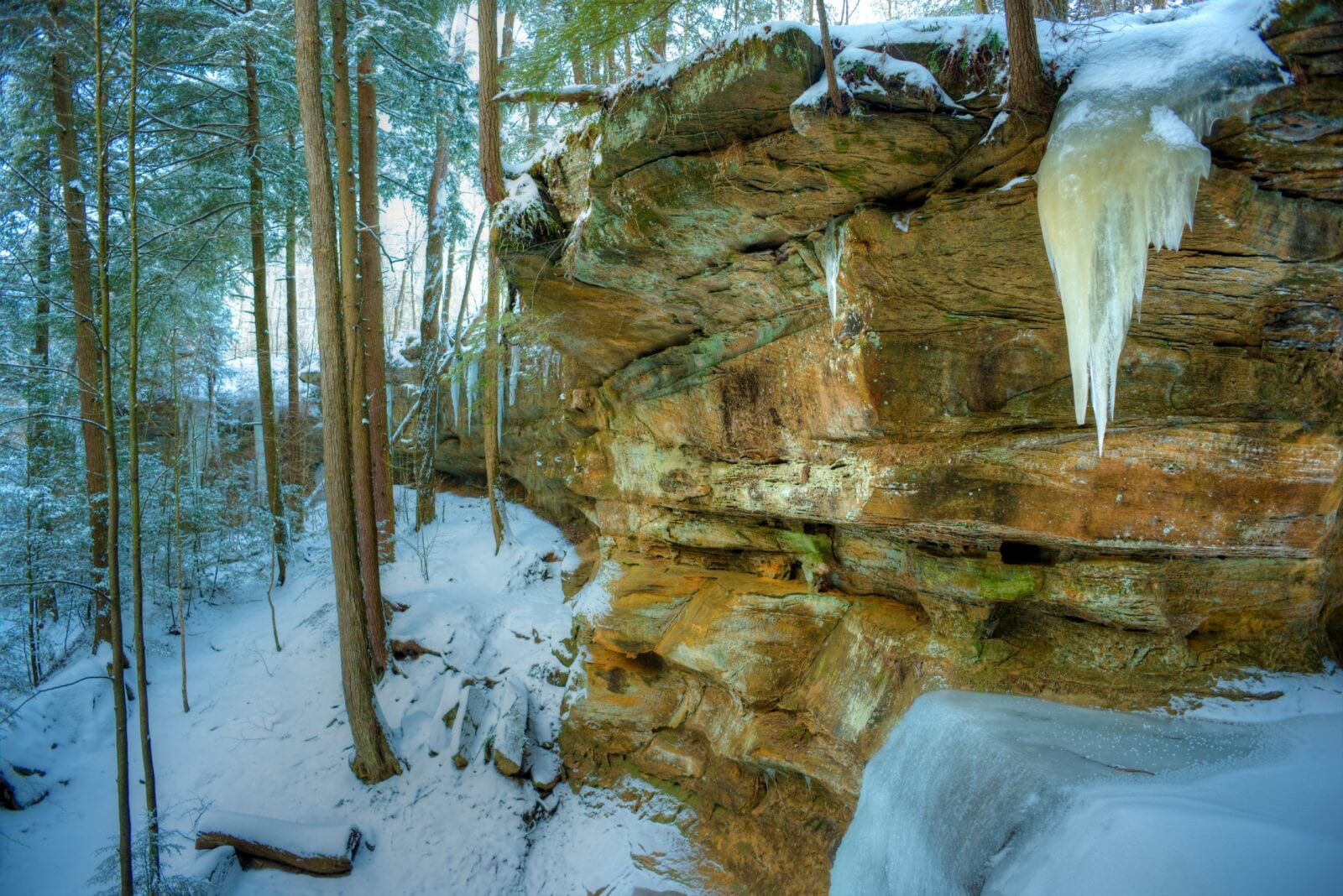 The park is named after the Hockhocking River, which in the Native American Delaware language refers to a bottle. A narrow creek above a popular waterfall forms the bottle’s neck, with the basin at the bottom forming the bottle.

Other outdoor favorites include Old Man’s Cave, part of a six-mile trail that connects to other park favorites such as Cedar Falls and Ash Cave. These and other natural rock formations will have you in awe all day.

And for those who want to extend their Hocking Hills time, there are plenty of cabin-rental opportunities in the area, available for booking at hockinghills.com.

Take a blustery winter hike! Trust us. You’ll love it.

If you’re already the hearty, outdoors type, you know just how rewarding and enjoyable a long trek in a silent, snow-covered forest can be.

For others who tend to hibernate in the house until spring, be assured you are missing some stellar sites, particularly in the Mountain State.

Here are seven of the best hikes West Virginia has to offer. But before you go, check wvtourism.com/winter-hikes/ for more information about any potential COVID-19 protocols or restrictions that may be in place.

Though less than three miles long and mostly flat, the Endless Wall Trail near Lansing offers breathtaking views of the New River Gorge and the bridge that spans it.

But be sure to watch your footing along this sometime- sandstone path. Forest foliage keeps much of the trail snow-free, but slick spots along the route do occur.

Topping out at nearly 5,000 feet, Spruce Knob offers some of the best views of West Virginia at any time of year, though the winter scenery isn’t to be missed.

The more snow blanketing the region, the better. But be warned. This isn’t a hike for the faint of heart and trail conditions can be tricky, so be sure to wear your sturdiest boots and maybe pack your trekking poles.

Located near Charleston, this 1.5-mile loop in Kanawha State Forest is short, but packed with gorgeous views that won’t disappoint when the temperature drops. Be sure to check your footing on the steeper sections and take lots of pictures of the sights. 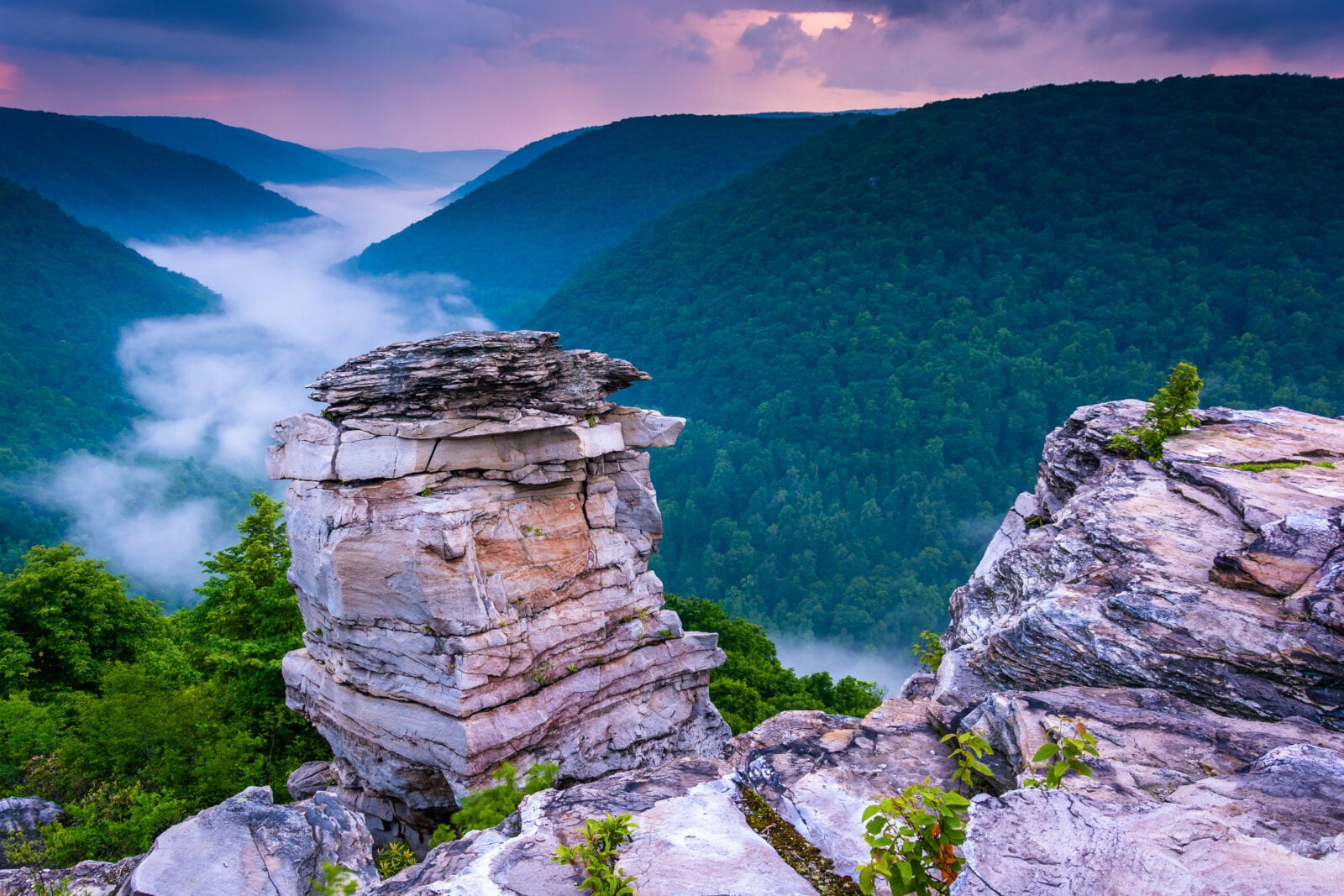 We actually recommend you embark on this trail in the dead of winter. The views of the frozen Blackwater Falls are just that worth it.

There are 20 miles of trails around the falls in the park so there’s plenty to keep you in awe other than the spectacular sight of water rushing over a rocky ledge, suspended in mid-flow.

The Cranberry Wilderness offers a landscape for the more adventurous, including cross-country skiers and snowshoe enthusiasts.

Hikers will also be enthralled either off or on the trail. But that doesn’t mean Cranberry isn’t for everyone. For those seeking a less-intense winter excursion, there’s the Cranberry Glades Botanical Area, which includes numerous bogs (it’s better-looking than it sounds) plus a half-mile boardwalk cutting through the wetlands to keep your boots dry and ease your way through the frozen waterways.

Located in the 17,371-acre Dolly Sods Wilderness in the Monongahela National Forest, this out-and-back trail offers views of mountains and meadows that are particularly gorgeous after a wintry dusting. But be careful. The trail is sometimes hard to follow when the snow gets deeper. Also watch out for those potentially icy water crossings.

Last but not least: Go for a West Virginia hike on New Years’ Day

West Virginia has a cool tradition of encouraging trekkers to ring in the New Year by taking to one of its many trails, aptly named “First Day Hikes.” Organized hikes take place along Bluestone National Scenic River, and in Beech Fork State Park and Pipestem Resort State Park, among others. Check their respective webpages for booking guided tours (if they’re still doing them due to COVID-19) and other options for ringing in the New Year with a walk in the woods.

Head underground in the Bluegrass State 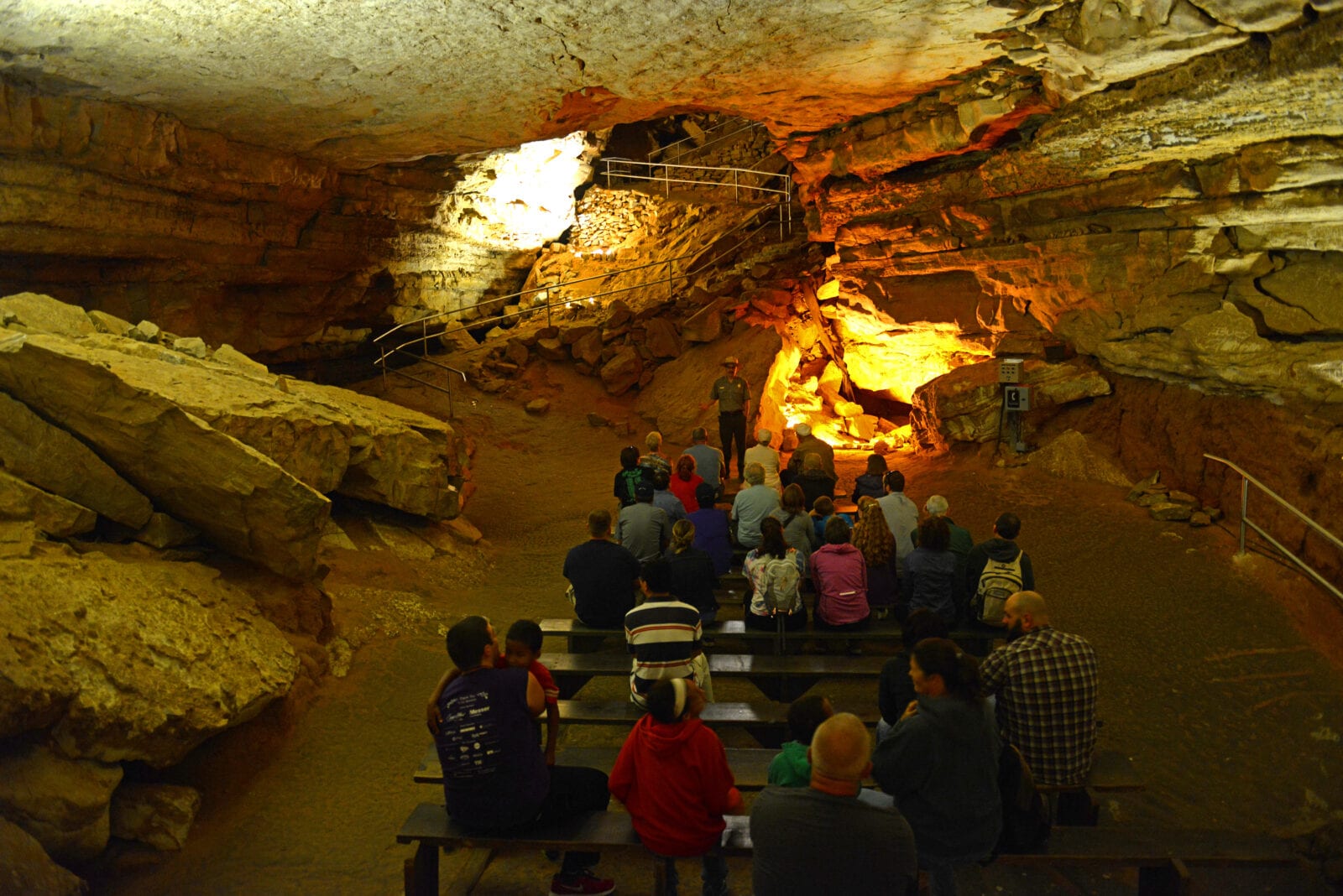 More than 400 miles of caves and passageways have intrigued humans for an estimated 5,000 years, dating back to Native Americans whose remains were discovered in the caves.

Mammoth has even been fought over during the aptly-named 20th-century “Kentucky Cave Wars,” which saw rivals vying for ways to commercially exploit the caverns. Be sure to ask your guide about the clashes that raged until the Department of Interior stepped in, acquired the caves and designated the entire area a national park.

Before you go, be sure to check for availability of tours due to COVID-19 restrictions in Kentucky. 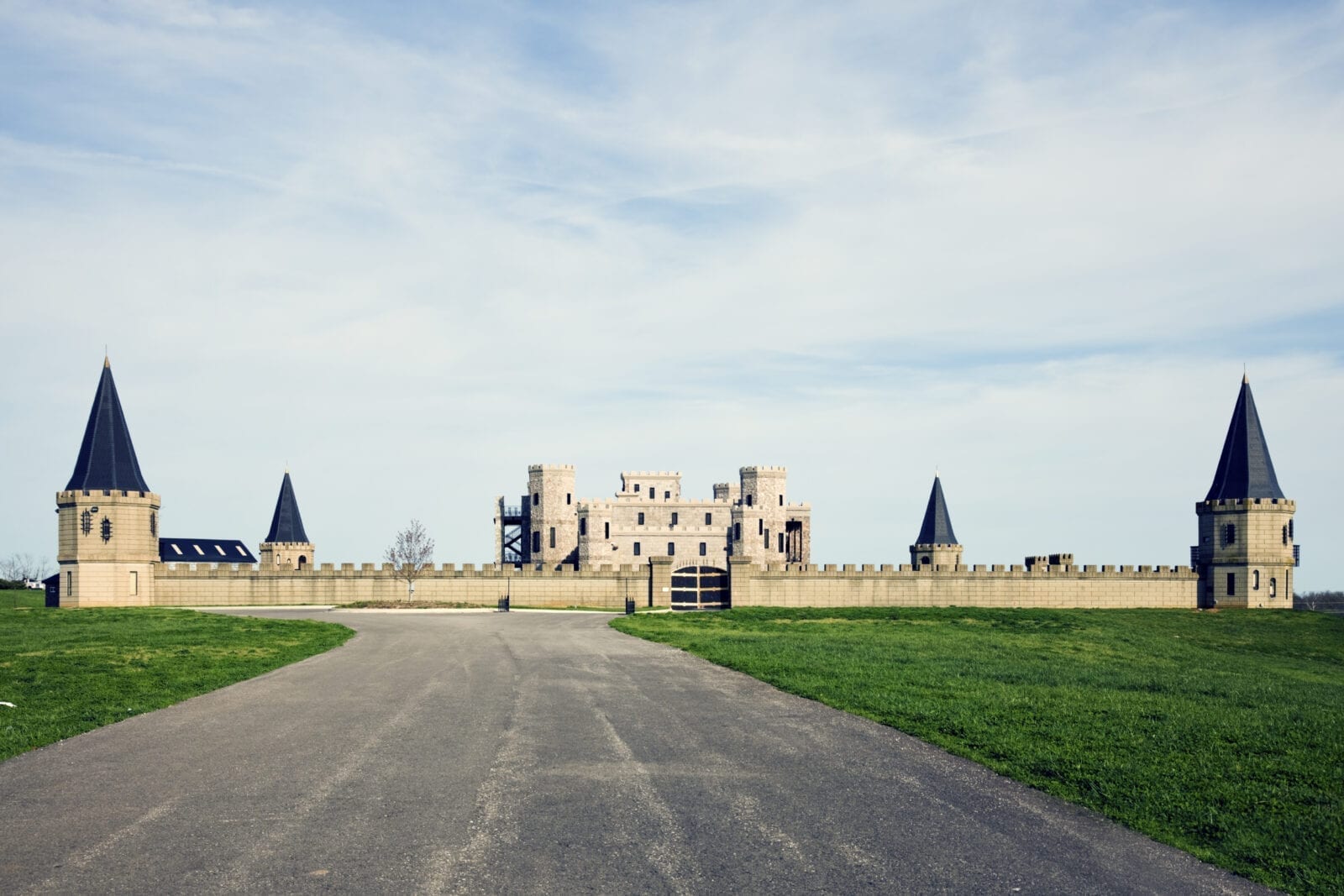 The Castle in Kentucky was originally envisioned as a private residence but today is a destination with overnight accommodations, and a farm. (Shutterstock)

It’s no coincidence that this palatial tip-of-the-cap to European royal residences is located in Versailles, Ky. (thekentuckycastle.com).

This out-of-place abode was built in 1969 by one Rex Martin after he and his wife, Caroline Bogaert Martin were inspired by their travels to Europe. Alas, their fairy-tale romance came to an end by way of divorce in 1975, with their manor still unfinished.

Fast-forward several decades: The Kentucky Castle is now a 14-room haute hotel including “a Farm View Cabin and four tower Chalets,” as well as a restaurant, located on a 55-acre farm that also regularly (pre-virus days) hosts weddings and other events.

Be sure to check the Kentucky Castle website (thekentuckycastle.com) or your favorite booking site for room availability.

Some rooms cost more than $600 a night. But booking more than a few weeks ahead of time may help you save money at this escape in the Bluegrass State.

Hike a while in Ohiopyle

While most folks familiar with this Western Pennsylvania favorite know Ohioyple State Park (dcnr.pa.gov) for its whitewater rafting, there are loads else to do in its more than 19,000 acres of pristine, protected forest.

Come wintertime, when the rafts are deflated and most paddlers avoid the river’s icy waters, there are trails aplenty to traverse.

One favorite is the iconic Baughman Rock Overlook offering views of the Youghiogheny River Gorge. Expect to not be alone here, except for the coldest of days, due to the overlook’s ease of access from a nearby parking lot.

The more adventurous should check out the Laurel Highland Hiking Trail stretching from Ohiopyle State Park to the Conemaugh Gorge near Johnstown, Pa. In parts it’s a strenuous hike, especially in the winter. But for those up to the challenge, it’s a worthwhile stretch of solitude and beauty among the trees. For those well-prepared enough to spend a night in the woods, there are shelters every six to 12 miles that can be reserved. Check with the park for seasonal availability, especially now.

Other not-to-miss sites include Cucumber Falls, the Sugarloaf Trail System, and Ohioyple Falls. Trying them all could keep you busy and fit until the spring thaw.

Seven Springs — It’s a classic for a reason 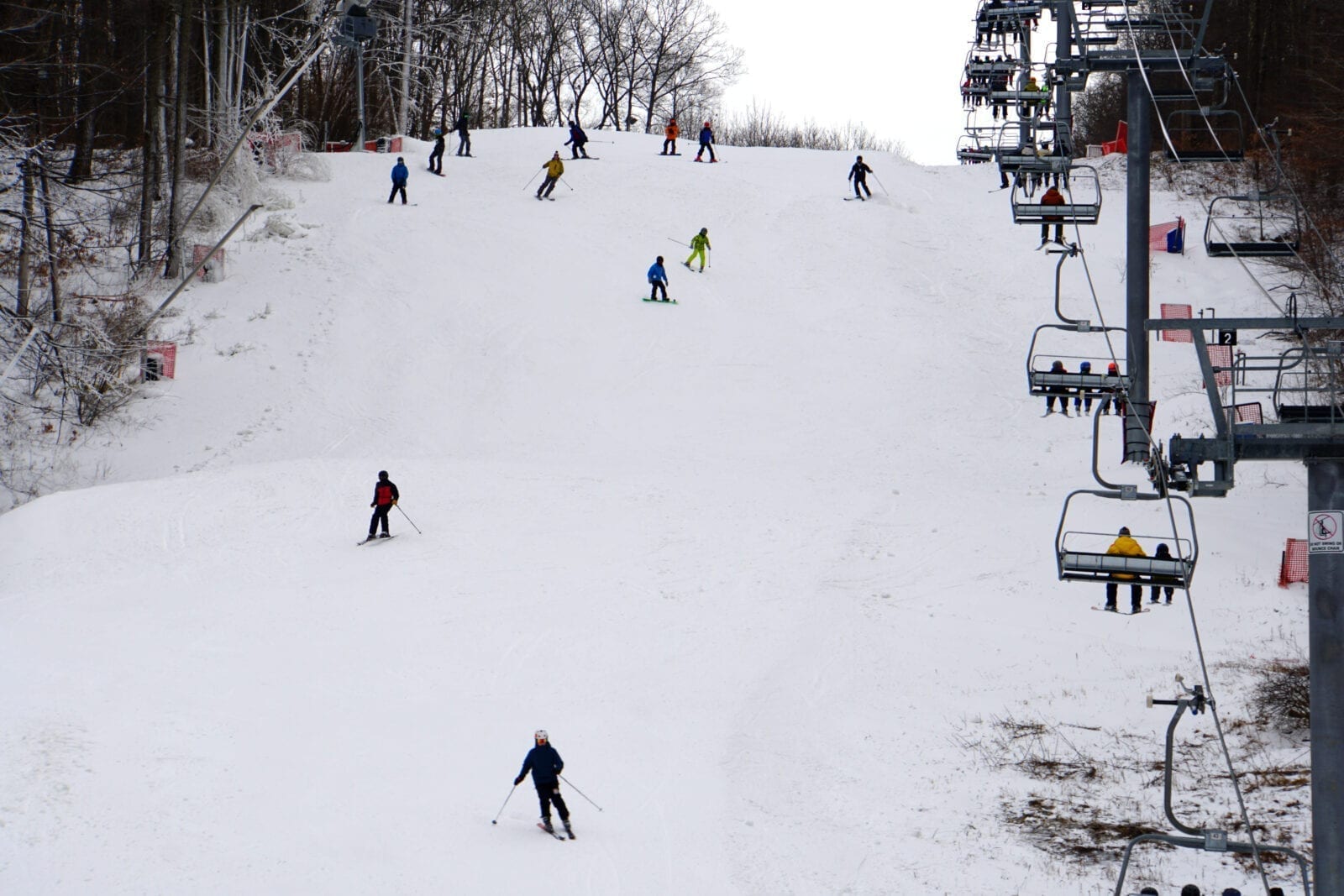 Pittsburghers have been heading “Up Springs” since the 1930s, when the site was converted from a private club to a public resort for skiing and other winter outdoor frivolity.

Since then, it’s become a favorite of those from Western Pennsylvania, Ohio, West Virginia and beyond for its growing number of ski runs, rapid ski lifts and other amenities including tubing runs, a snowboarding park and more.

Seven Springs’ on-site choices for extended stays include a hotel, townhomes, condos, cottages, and chalets that can all be booked through the Seven Springs site (7springs.com/lodging/). Surrounding Somerset County offers additional places to stay and towns to explore.

Poconos pampering at its best

Not to be outdone by the western half of the state, the Poconos are an Eastern Pennsylvania winter getaway classic (poconomountains.com).

Less than a two-hour drive from Philadelphia and New York, this mountain getaway is practically world-famous, so what more can we say? The region offers all of your favorite outdoor winter activities, and boasts luxurious places to stay such as The French Manor (thefrenchmanor.com) and the historic The Inn at Jim Thorpe (https://innjt.com).

Toss aside the chicken wings. Buffalo is all about tobogganing. 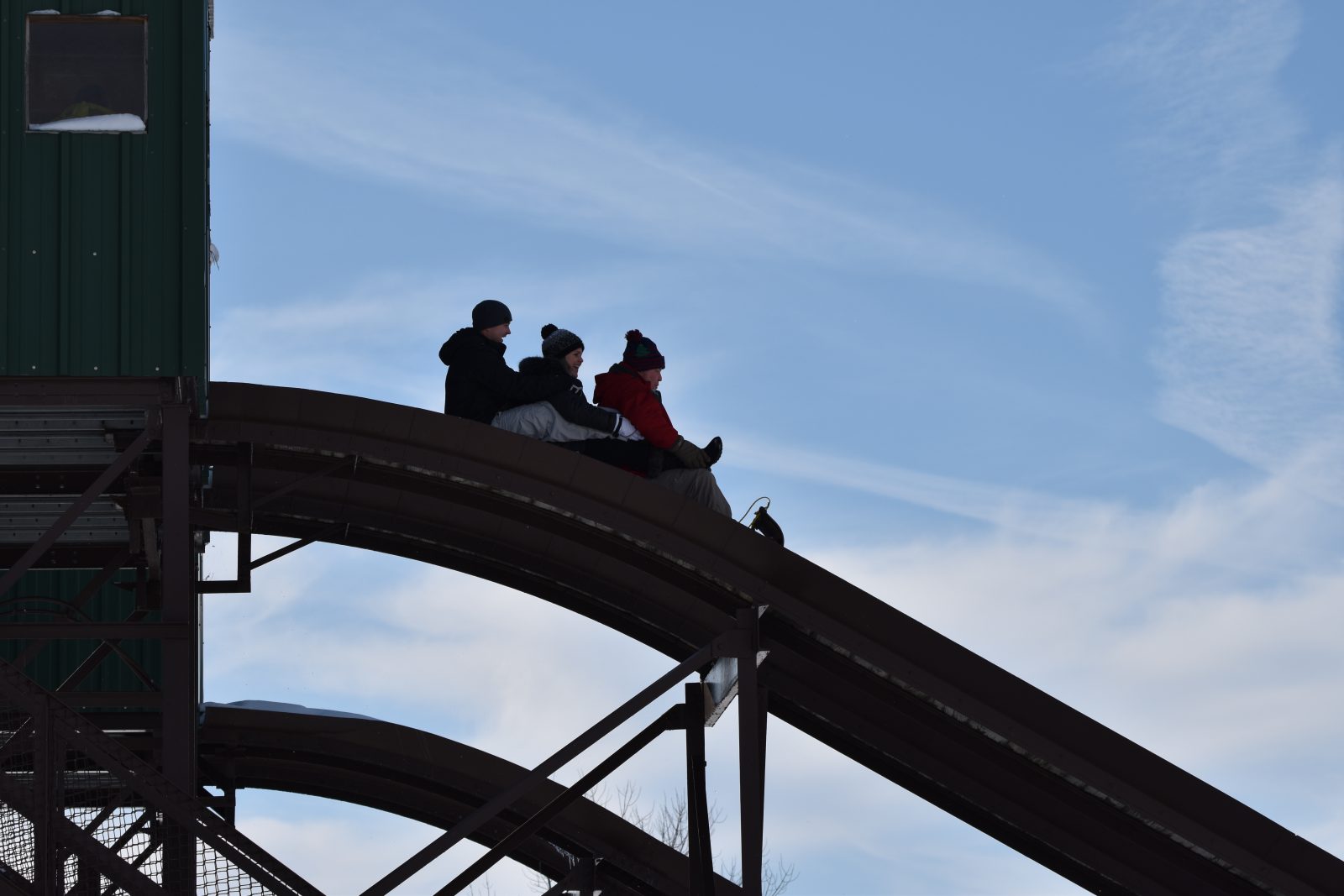 Get a daily digest of the Postindustrial's newest and most popular stories from the Rust Belt & Appalachia, plus our quarterly magazine, and podcasts. Just $5 per month.