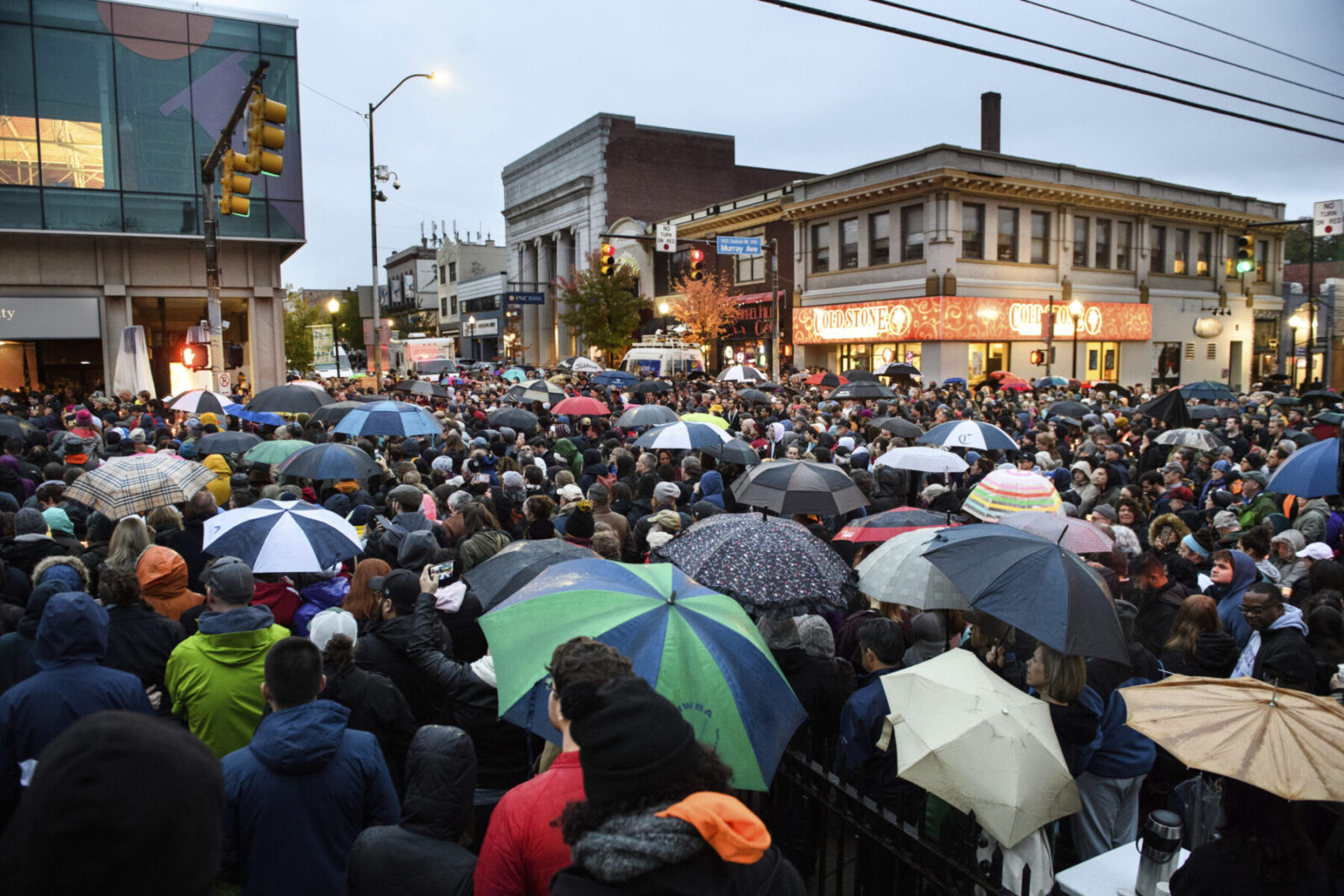 Stephanie Strasburg captured this image of people gathering for a vigil on Murray and Forbes Avenues, blocks from where an active shooter shot multiple people at Tree of Life Congregation synagogue on Saturday, Oct. 27, 2018, in the Squirrel Hill section of Pittsburgh. She and the staff of the Pittsburgh Post-Gazette won a Pulitzer Prize for their coverage of the tragedy. (photograph from the Pittsburgh Post-Gazette via AP)

In Season 2, Episode 6 of the Postindustrial Podcast, Stephanie Strasburg talks with host Carmen Gentile. Strasburg is a staff photographer and filmmaker with the Pittsburgh Post-Gazette. Her recent work includes an investigation on child sexual abuse in the Amish and Mennonite communities, for which she and her fellow reporters were named finalists for the Pulitzer Prize in local reporting and nominated for a Mid-Atlantic Emmy. She is also part of the Post-Gazette team that received the 2019 Pulitzer Prize for breaking news reporting for coverage of the Tree of Life synagogue massacre.

I’ve always been drawn to stories that I can spend a bit of time with and allow the viewer to see the complexity of the situation. When I go into a story, a lot of times it just seems like it’s not done. Like it’s, everything is way more complicated than that. And so it’s been a gift to be able to spend a longer amount of time, to be able to build relationships with people and get to know them and get to see their story unfold in a little bit longer stretch of time.

I think spending that time is important because we’re so often more than just the one issue that gets explored in a typical daily news story. And ….I think that there’s more obstacles to doing that now and we kind of have to change as an industry to be able to support it. But there’s also more and more grants out there. So as the nature of the industry changes, so will the funding model for these kinds of projects.

Can you tell our listeners what you were documenting in the Amish and Mennonite community?

When we started to look into it, there were things that were similar to the Catholic church in terms of the abuse of power. But there are also things in the structure of the religion that made it very different. And once we peeled back the first layer of the onion on that…..all of this stuff just started to pour out. And what was challenging about it is they’re communities that try to separate themselves often from what they call the English world.

We were able to connect with a group of people who had actually left the Mennonite church because of these issues,  issues of sexual abuse, especially childhood sexual abuse in these communities.

We met with them in a coffee shop in Central Pennsylvania just to see what was going on. We sat with them for what we thought would be an hour conversation. And probably four hours later, we kind of stumbled out of the coffee shop. Bleary-eyed like we had just been hit with a fire hose of the most intense stories. And what was amazing was how candid people were.

And I think it was because nobody was listening to them. And part of the reason that they had left the church was because they were being shunned for bringing these issues up. You aren’t supposed to talk about sex and sexuality. 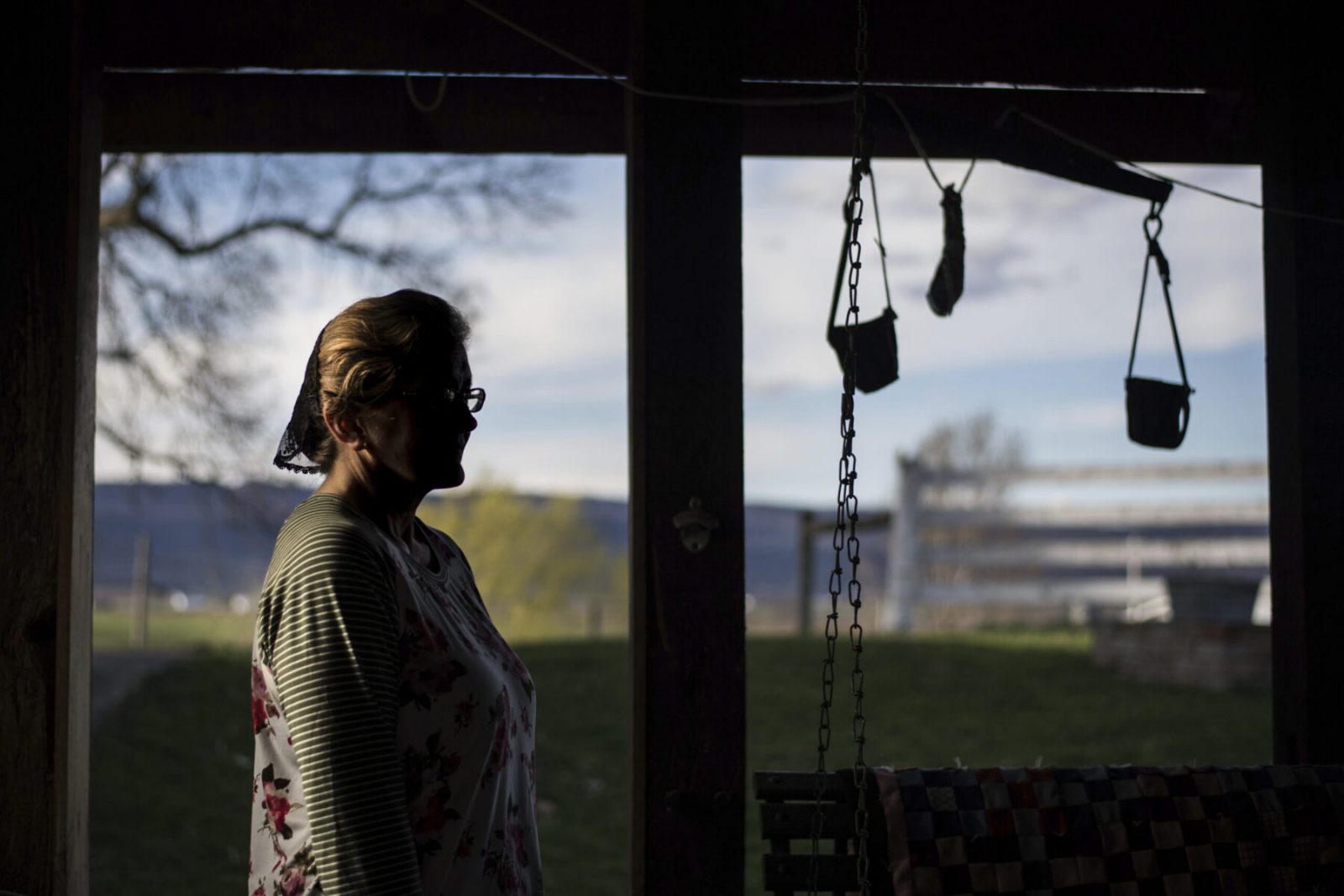 Stephanie Strasburg took this April 10, 2019 photograph that shows Kay, a former conservative Mennonite woman, in Central Pennsylvania. Church leaders pulled Kay aside and told her she was excommunicated for failing to forgive her husband. Her conservative Mennonite church demanded that she take a registered sex offender back into her home, that she forgive and forget what he had done to their baby and her sibling who followed. But Kay had tried that blind forgiveness before, and she couldn’t do it again. (Photograph from the Pittsburgh Post-Gazette via AP)

To read Coverings, an investigation on Amish and Mennonite communities, click here.

Postindustrial founder Carmen Gentile has worked for some of the world’s leading publications and new outlets including The New York Times, USA Today, CBS News and others. His book, “Blindsided by the Taliban,” documents his life as a war reporter and the aftermath of his brush with death after being shot with a rocket-propelled grenade in Afghanistan.