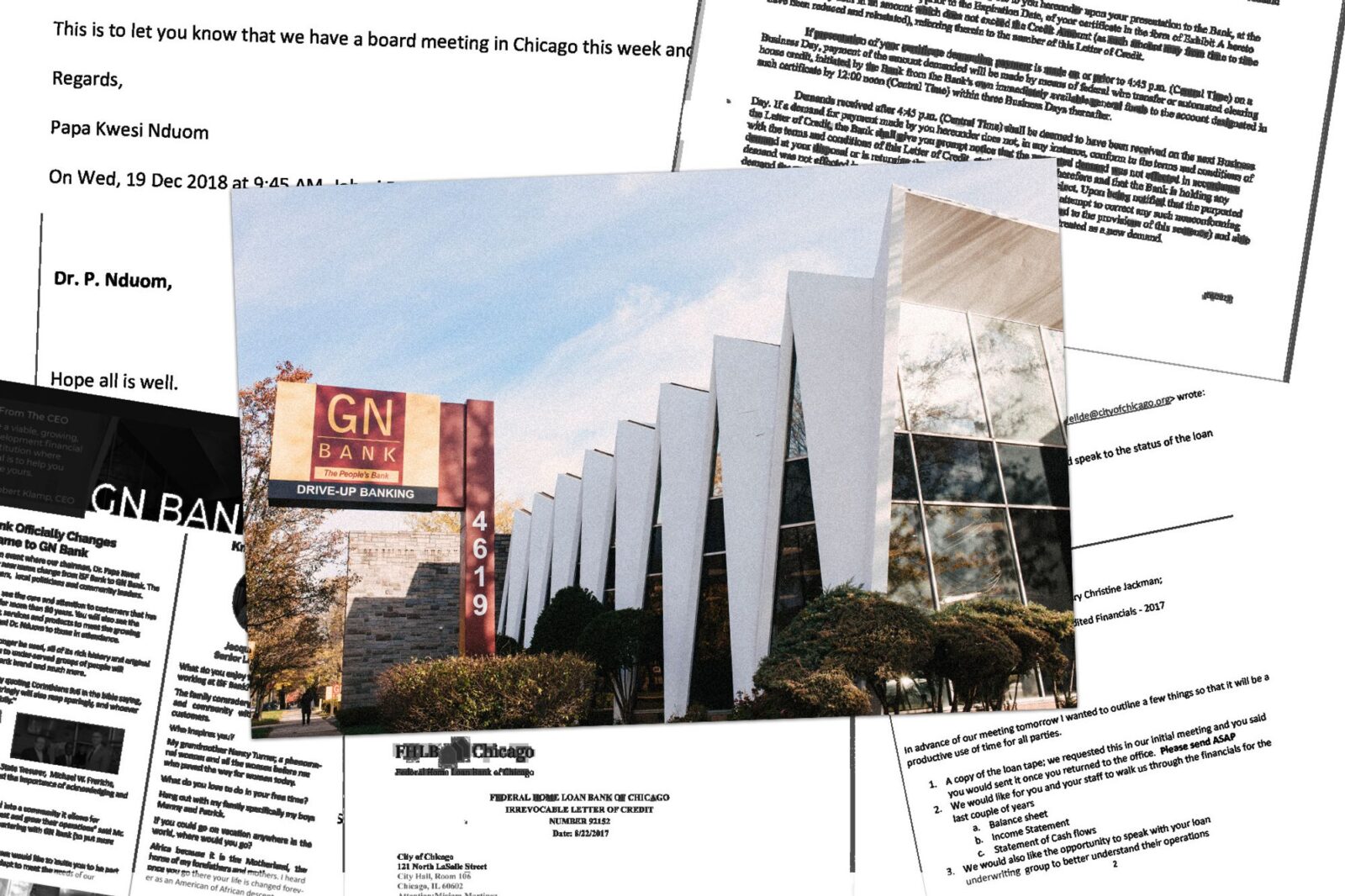 The $20 million deposit was supposed to be a turning point.

When the city of Chicago deposited the money into Illinois’ last Black-owned bank in 2017, the story received national news coverage. The city treasurer said the deposit represented a “paradigm shift” in how the government supported community investment. And the bank’s owner and chairman predicted that it would strengthen the institution and “help people fulfill their dreams.”

But less than three years later, an officer at GN Bank told the city it would return the money. Instead of sparking new loans and investment, he indicated, the deposits ended up costing the bank hundreds of thousands of dollars in interest — more than it could afford.

As Black-owned banks around the country disappear, government officials have come under pressure to save them. Often, they opt for a simple solution that seems popular with voters: depositing large sums of money in those institutions.

Yet experts note that multimillion-dollar deposits only benefit small banks if they are able to make loans in the community, which GN struggled to do. Unlike other tools at the government’s disposal, such as including smaller banks in bond deals, big deposits alone can’t help them make a profit.

“Municipal deposits can be very expensive for financial institutions,” said Horacio Mendez, president and CEO of the Chicago-based Woodstock Institute, a nonprofit policy group that focuses on financial issues. “Sometimes, a city or a state kind of thinks that putting a lot of money into a financial institution is doing them a favor.”

The city of Chicago has been mostly unsuccessful at increasing the number of deposits at minority-owned and community banks. No such banks currently hold city deposits. City officials recently announced that, despite an outreach effort to smaller institutions, just 11 banks applied to accept municipal deposits for 2022, and all were large, corporate entities, including BMO Harris and JPMorgan Chase.

The story of GN Bank, formerly called Illinois Service Federal Savings and Loan, helps illustrate why community banks may be shying away from the city’s proposal.

Founded in 1934, the bank had long been a small community institution that struggled to compete with larger lenders in the South Side neighborhoods where it did business. After the bank suffered significant losses in the Great Recession, federal regulators intervened in 2013, urging it to improve management and raise capital. Through enforcement actions known as consent orders, federal regulators added restrictions to the bank’s operations in the following years.

Acquiring more deposits wasn’t one of the regulators’ directives. In fact, officials had reported for years that the bank was holding too much money in deposits for the small number of loans it was making. But the bank was soon drawn into campaign politics.

In 2014, Bruce Rauner, a Republican, generated a media buzz when he publicly presented $1 million of his own money to another small South Side lender. It was one in a series of publicized campaign stops the white multimillionaire made in Black neighborhoods on his way to winning the governor’s office in November 2014.

Three years later, Democrat JB Pritzker, a white billionaire, was aiming to win the nomination to face Rauner when he took questions from listeners on WVON, a popular South Side radio station. One of them mentioned Rauner’s 2014 deposit and asked point blank: Would Pritzker put $1 million of his own money into a Black-owned bank?

Pritzker didn’t hesitate. He already had.

Black clergy had urged him to make the deposit at Illinois Service Federal, Pritzker said, because “that’s a very important way for us to create employment in the African American community.”

“Municipal deposits can be very expensive for financial institutions. Sometimes, a city or a state kind of thinks that putting a lot of money into a financial institution is doing them a favor.” — Horacio Mendez, president and CEO of the Chicago-based Woodstock Institute, a nonprofit policy group that focuses on financial issues

Not long after Pritzker made his deposit, city and state officials deposited public money at ISF.

Chicago City Treasurer Kurt Summers began discussing ISF with his staff in February 2017, soon after the shutdown of Seaway Bank and Trust left ISF as the only remaining Black-owned bank in the state.

According to messages obtained through a request under the state’s Freedom of Information Act, Summers emailed his staff news coverage of ISF. That March, Summers met with Papa Kwesi Nduom, the bank’s owner and chairman. The leader of a business conglomerate in Ghana, he and his family had acquired the bank the previous year. Over the next several months, Nduom and Summers, along with their staffs, discussed steps the bank could take to receive a deposit of city money.

By law, city officials are required to issue a request for proposals from institutions interested in serving as municipal depositories. The responses are then supposed to be evaluated by city finance officials and approved by the City Council.

But by 2017, the city had not completed a full evaluation and approval process for depositories in seven years. As a result, city funds were typically left in banks that had submitted bids or applications years earlier. ISF, which didn’t have a city deposit at that time, had applied to be a depository previously.

As Summers and his aides considered a deposit with ISF, the bank remained under a federal consent order flagging “unsafe or unsound banking practices.” Summers said in an interview that he and his staff spoke to federal regulators about the Nduoms and their plans for reviving the bank. His office also asked the bank to provide collateral in the form of a letter of credit from the Federal Home Loan Bank of Chicago, a government-sponsored institution that provides other banks with access to funding for loans and other services. The letter of credit ensured that a city deposit would be safe even if ISF imploded, Summers said. Those steps, he added, were the “most fiscally responsible and sound approach to protecting” taxpayer money.

“The process wasn’t one that we took lightly,” Summers said. “We felt good about giving them a shot.”

That September, Summers held a press conference with ISF employees to announce that the city would deposit $20 million at the bank. In media interviews after the event, Summers said that by providing more funds for the bank to lend, the city would provide an economic boost to the community.

At the time, Summers was reported to be mulling a run for higher office. The day after the ISF announcement, Summers’ political campaign committee highlighted the deposit in an email blast to supporters. “If you agree with the work we’re doing, can you show your support with a $5, $25, or $55 donation?” Summers asked in the email.

Still, he said in the interview, politics “really wasn’t a factor in this decision at all.” He added: “I grew up five blocks away from ISF. I know exactly that community that it’s intending to serve. It was much more personal for me and [about] the potential impact of it.”

In a written statement to ProPublica, Nduom said the bank returned the deposits “to maintain the bank’s loans-to-assets ratio consistent with best practices. That has not impacted our positive relationship with both the City of Chicago and the State of Illinois.”

The following spring, the bank decided to seek a deposit from the state as well. The state treasurer’s office has for years run a program designed to put deposits into community banks and credit unions. In July 2018, three months after bank officials submitted an application, the office of Treasurer Michael Frerichs deposited $10 million with ISF. That same month, Frerichs spoke at an event the bank held to announce that it was changing its name to GN Bank.

With those deposits, nearly a quarter of the bank’s deposit total came from the city, the state and Pritzker.

By the fall of 2018, city officials’ optimism had turned to concern. After they asked the bank for records charting its loan activity, they were alarmed when ISF officers couldn’t readily produce them. “I hope you can appreciate the urgency here, and would request more effort in meeting these requests immediately if our relationship is to continue,” a lawyer in the treasurer’s office wrote to bank officers.

The bank eventually provided the records, allowing the treasurer’s office to conduct an analysis of GN Bank’s lending activity. According to the bank’s own records, it was making few loans at this time.

In August 2019, three months after newly elected Chicago Treasurer Melissa Conyears-Ervin took office, succeeding Summers, several of her aides held a meeting with GN representatives to discuss the institution’s lending practices and financial health, including its “strategy to increase capital,” as a treasurer’s office memo put it.

The bank officers’ presentation reviewed GN’s history and noted the city deposit had earned $295,583 in interest in just under two years. The officers stressed their ongoing mission to promote homeownership and economic development. And they detailed the bank’s growth plans, which included marketing to college students and millennials.

But despite the optimism of its PowerPoint, the bank remained in such grave condition that its officers soon decided they could no longer pay the interest on the public deposits.

They returned the state funds first. In a letter dated Jan. 17, 2020, an officer for GN informed Frerichs’ office that the bank was returning the money, effective immediately. “Please be assured that this is not good-bye,” the bank officer wrote. “We value our relationship with the Treasurer and will be utilizing your programs at a later time.”

The city deposit was next. Over the next few weeks, bank officers tried to persuade the city to accept a lower interest rate on its deposit. But the bank officers were unable to get the new terms they wanted.

In a written statement to ProPublica, Nduom said the bank returned the deposits “to maintain the bank’s loans-to-assets ratio consistent with best practices. That has not impacted our positive relationship with both the City of Chicago and the State of Illinois.”

Taxpayers lost no money with both the state and city deposit. A campaign spokesman for Pritzker said the governor still has a deposit at the bank and “it is not less than his initial investment.”

In October 2020, a GN Bank manager submitted an application in response to the city’s request for proposals for banks seeking to receive municipal deposits. As required, the bank provided a large packet of documents, including an annual audit, a statement detailing collateral for the deposit and a signed city affidavit promising the bank would “use reasonable efforts” to make loans in low- and moderate-income areas.

The city approved GN to serve as a depository again, but this time the bank decided not to accept any funds. It did not apply for a deposit in 2022.

This article was originally published by ProPublica, a nonprofit newsroom that investigates abuses of power. Sign up for ProPublica’s Big Story newsletter to receive stories like this one in your inbox as soon as they are published.