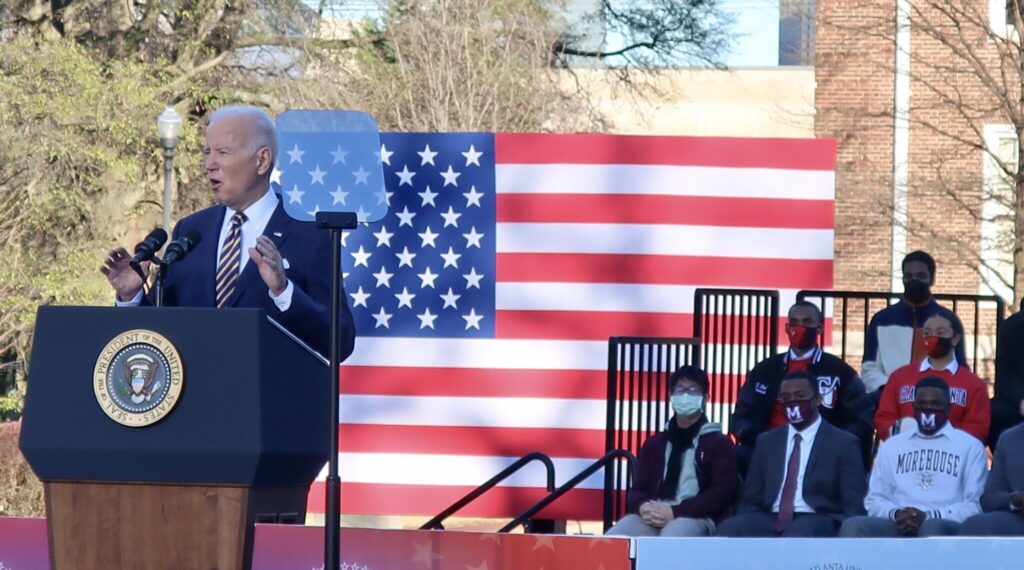 Democratic President Joe Biden took to the pulpit Sunday at the historic Ebenezer Baptist Church where Martin Luther King Jr. once delivered many powerful and eloquent sermons in the final years of his life.

With an invitation from Ebenezer pastor and U.S. Sen. Raphael Warnock, Biden on Sunday became the first sitting president to preach from the pulpit of downtown Atlanta church on what would’ve been the 94th birthday for the slain civil rights leader. Biden’s speech was about the hard path it takes to achieve necessary changes, which exemplifies King’s struggle for equality for Black people.

Despite King’s death at 39 years old, Biden said King’s legacy endures because he remained optimistic while understanding that progress was never easy. The leader of the civil rights movement preached powerful sermons and spread his call for nonviolent social change across many cities before his assassination on April 4, 1968, in Memphis, Tennessee.

Biden on Sunday reflected on some of the social and racial progress made in recent years, including Ketanji Onyika Brown Jackson becoming the first Black woman to become a U.S. Supreme Court justice.

The president also encouraged people to emulate King’s traits as the fight for justice continues.

“It’s always possible that things do get better, in our march toward a more perfect union,” Biden said. “But at this inflection point, we know there’s a lot of work that has to continue in economic justice, civil rights, voting rights, and protecting our democracy. And I’m remembering that our job is to redeem the soul of America.”

On Monday, state and federal offices will be closed for the holiday honoring King. Numerous events honoring the civil rights activist have been held throughout the weekend and many more are set for Monday. 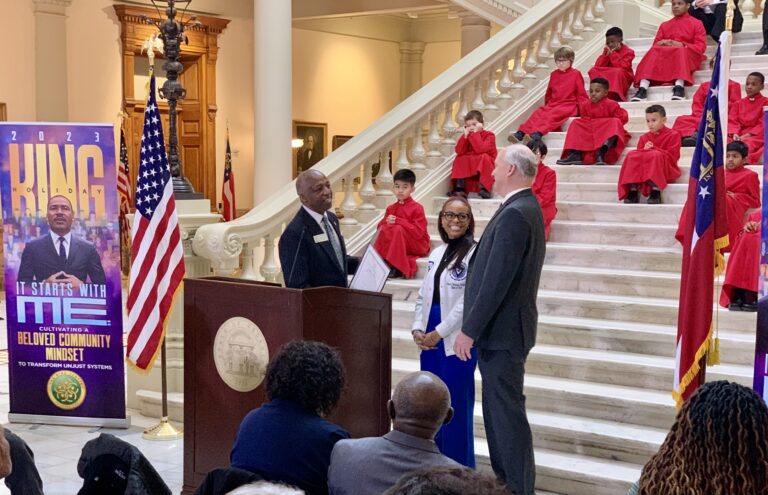 Martin Luther King Jr.’s grandniece, Farris Christine Watkins, was presented a state proclamation during the annual celebration in honor of the leader of the civil rights movement. // Stanley Dunlap/Georgia Recorder

The keynote speaker, Georgia Power CEO and president Chris Womack, was introduced by former Columbus Democratic Rep. Calvin Smyre, who returned to the Gold Dome while awaiting his confirmation as U.S. ambassador to the Bahamas.

Georgia House Speaker Jon Burns credited Smyre for his role in making King’s birthday a state holiday in 1984 and securing support for a statue to honor him on the Georgia Capitol grounds in 2017. The state legislation creating the holiday that passed in 1984 didn’t mention King by name, a strategy to neutralize opposition. Bills to create a state holiday had failed in the Georgia Legislature until the U.S. Congress designated the third Monday in January as a federal holiday honoring King the year before.

Womack, a Black man who became the CEO and chairman of the state’s largest utility company in 2021, said King’s dream remains unfulfilled long after the Declaration of Independence decreed “all men are created equal” in 1776.

As part of Womack’s call to keep King’s legacy alive, businesses should continue to diversify their workforce and provide basic necessities to those in need, Womack said.

“We must work collectively with people that are trying to help whether it’s food kitchens, whether it’s shelters, whether it’s need for additional housing,” Womack said. “Things like homelessness, we must not accept that as a reality. We must establish goals in our community that we’re going to completely eliminate (homelessness).”

According to a Harris national poll conducted a year before King’s murder, 75% of the American public disapproved of him. Jim Crow law supporters in the Deep South, as well as many moderate whites in other parts of the nation, opposed full integration and equal treatment of Black people.

Republican Gov. Brian Kemp offered a prayer at the Friday ceremony for people who suffered in the tornadoes that ripped through Georgia the day before. The storm claimed the lives of a five-year-old boy and a Department of Transportation employee who was working to clear a road. 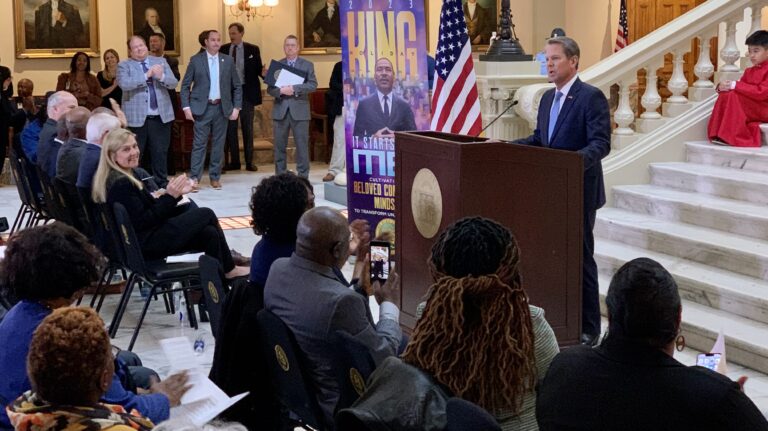 Gov. Brian Kemp said at state Capitol ceremony he views the racial progress in Georgia as something that lives on in the legacy of Martin Luther King Jr. // Stanley Dunlap/Georgia Recorder

Kemp said King’s message of racial equality and moral responsibility still resonates today as he noted King faced hatred and prejudice and threats against his family.

Kemp said he views the racial progress in Georgia as something that lives on in the legacy of the civil rights leader, who faced and overcame so many obstacles.

“Each year we mark this occasion, not just to remember Dr. King or his wisdom, not just to celebrate his contribution to our state and nation, but also to remember his mission, his actions and his inspiring message,” Kemp said. “To remember the man is to consider the man and each of us must consider how we build on his timeless legacy in our own unique ways.”