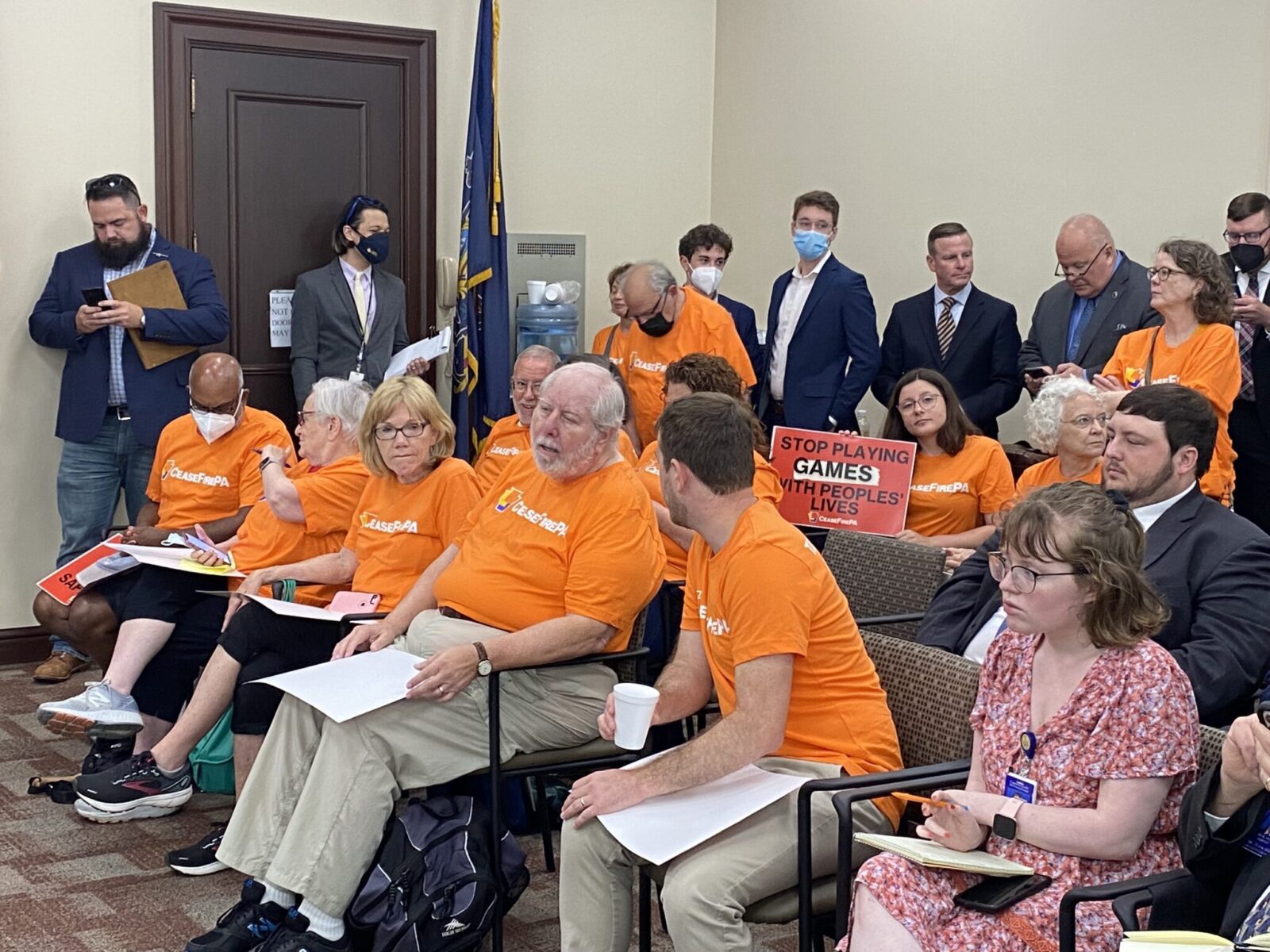 A Republican-controlled state House committee moved Monday to bottle up a series of gun violence-reduction measures, even as lawmakers on Capitol Hill reached a tentative agreement that could offer states assistance in reducing the number of firearms-related suicides.

The House Judiciary Committee voted to send the package of four bills, authored by Democratic lawmakers, to the House floor, where they hoped the chamber’s GOP leadership would bury the bills in an unrelated committee, effectively guaranteeing their demise. That happened about an hour later, according to Spotlight PA.

In a counterintuitive move, most of the House panel’s Democrats joined with Republicans to send the bill to the House, gambling that they’d get a more sympathetic hearing on the House floor than they would have received before the judiciary committee.

The committee’s chairperson, Rep. Rob Kauffman, of Franklin County, is a steadfast opponent of gun violence reduction measures. He once vowed that a reform measure seeking to reduce firearms suicide never would receive a vote as long as he was in charge. 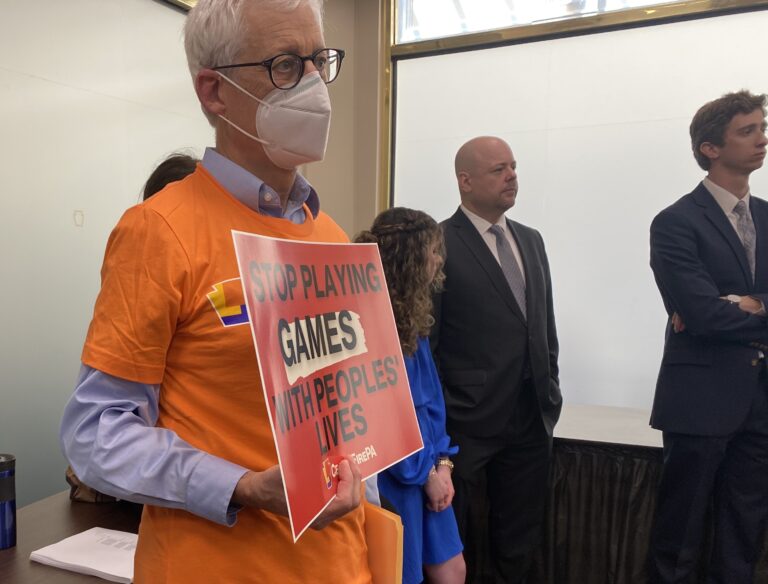 A protester holds a sign calling for action on gun violence during a meeting of the Pa. House Judiciary Committee on Monday, June 13, 2022. // Capital-Star photo by John L. Micek

A bill authorizing extreme risk protection orders, which would allow for the temporary, court-ordered confiscation of someone’s weapons if it’s shown they pose an immediate risk to themselves or others, was among the measures that were sent to the House floor with the intent of banishing them to the chamber’s Republican-controlled Local Government Committee.

The proposal, popularly known as a ‘Red Flag’ law,  has been shown to work if they are used correctly, CBS News reported.

An emerging framework agreement on Capitol Hill would offer states financial incentives to approve and enact their own red flag laws. On Monday, the House committee’s Democrats, and the bill’s Republican sponsor, expressed frustration over the move.

“One of the most at-risk groups for gun suicides is our veterans. One in five gun suicide victims are veterans,” Rep. Liz Hanbidge, D-Montgomery, a former suicide prevention counselor, told her colleagues. Taking guns out of the hands of people contemplating death by suicide prevents them from making “short-term decisions with very long-term consequences,” she added.

The other bills Republicans attempted to stymie on Monday included an assault weapons ban, a proposal mandating safe storage practices for firearms owners, and a bill allowing municipal governments to craft their own gun ordinances.

Rep. Tim Briggs, of Montgomery County, the panel’s ranking Democrat, said Republicans would have blood on their hands if another tragedy unfolded before the bills saw a vote, prompting an angry rebuke from Kauffman. 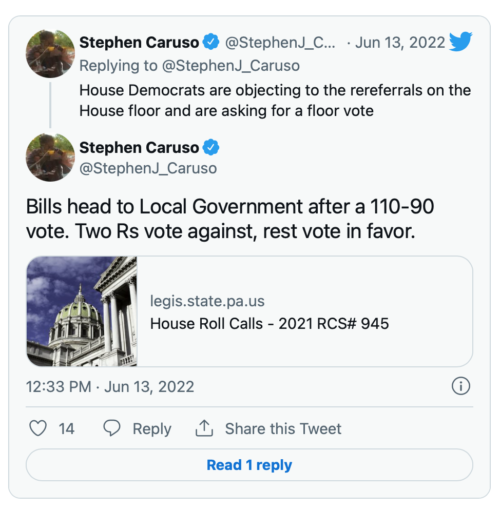 Rep. Todd Stephens, R-Montgomery, a former prosecutor who sponsored the red flag bill, who opposed efforts to strand the bills, announced about midway through the meeting that he nonetheless planned to vote in favor of advancing them, since it at least meant they would be released from the no-man’s land of Kauffman’s committee and would go before the full House.
Briggs joined Kauffman in his gambit, arguing that he believed that Democrats could have a better chance of achieving their goals in the Local Government Committee or before another likely destination —  the House Rules Committee, which is chaired by GOP Floor Leader Kerry Benninghoff, of Centre County.

“It kills me to say this, but this committee is broken,” Briggs said. He was joined in his vote to advance the bill by five of the 10 Democrats on the 25-member panel.

Rep. Jared G. Solomon, D-Philadelphia, told his colleagues that he believed the House had a “moral imperative” to take action on the bills amid a deadly month of violence both inside and outside of Pennsylvania.

And because of the announcement of the Senate’s bipartisan framework, “we should be emboldened to act,” he said.

In a statement, Amy Sarno, a volunteer with the state chapter of Moms Demand Action, sharply criticized the actions by the committee’s GOP majority.

“These bills are some of the first common sense gun safety measures we’ve seen from the legislature this session, and their passage is crucial to helping end this gun violence crisis,” she said. “We are disappointed in the committee’s decision today and we call on Republicans in the Legislature to take gun safety seriously so we can start saving lives.”

A 3-decade veteran of the news business, John L. Micek is the Pennsylvania Capital-Star‘s Editor-in-Chief. An award-winning political reporter, Micek’s career has taken him from small town meetings and Chicago City Hall to Congress and the Pennsylvania Capitol. His weekly column on U.S. politics is syndicated to 800 newspapers nationwide by Cagle Syndicate. He also contributes commentary and analysis to broadcast outlets in the U.S., Canada and the U.K. Micek’s first novel, “Ordinary Angels,” was released in 2019 by Sunbury Press.