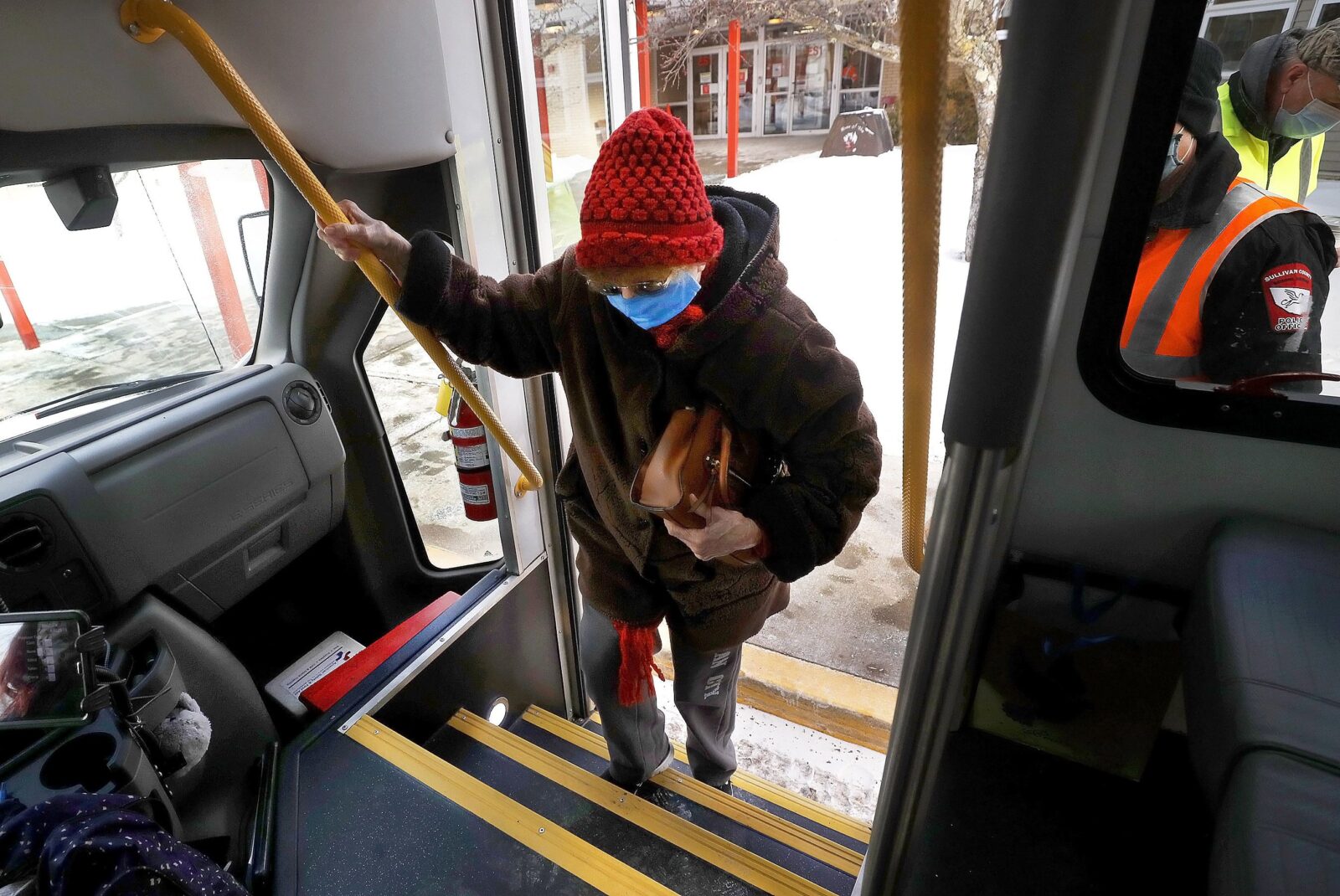 After receiving her first vaccination at a clinic in Sullivan County earlier this year, Laurell Cobb, 83, rode home on a Dial-A-Driver bus, run voluntarily by a local agency. (Fred Adams / Spotlight PA)

HARRISBURG — Pennsylvania will open COVID-19 vaccine eligibility to anyone 16 or older starting April 19, joining dozens of other states by greatly accelerating its rollout after Gov. Tom Wolf’s administration came under fire for its haphazard start.

President Joe Biden issued a statement Monday applauding 31 states that had vowed to open eligibility to all adults by the same date, ahead of the White House’s imposed deadline of May 1.

The Wolf administration had previously set Wednesday as the deadline for vaccine providers to clear waitlist backlogs and to schedule an appointment for anyone in Phase 1A — which includes health care workers, people older than 64, and those 16 and older with certain underlying health conditions.

As of Wednesday, more than 3.4 million people had received at least one dose of a coronavirus vaccine in Pennsylvania, state data shows. The health department estimates there are about 4 million eligible people in Phase 1A, and officials initially expected about 80% to seek the vaccine.

But throughout the state, at least 90% of the estimated Phase 1A population in some areas has received the vaccine, according to the Department of Health.

Fayette County Commissioner Scott Dunn said the county COVID-19 task force worked the past week to clear its 13,000-person countywide waiting list, removing some people who signed up from similarly named counties in Georgia and Kentucky, and identifying people who will qualify in Phase 1B.

“We have a group of volunteers at a phone bank, and they make calls all day long,” he said.

Dunn said Fayette started encouraging those in Phase 1B on Wednesday to sign up through the county registry so that the task force can prepare to start scheduling those appointments. The task force has also assembled a subcommittee to establish plans to vaccinate people who are homebound, and to reach older residents who live in senior high rises and public housing.

“Once we get the vaccine, we can make that happen,” Dunn said.

READ MORE: See a map and county-by-county listing of vaccine providers, as well as the full description of each phase.

Chester County officials are developing similar plans for reaching the more than 600 homebound residents who live in the county, Commissioner Marian Moskowitz said.

The county rolled out a new sign-up system Monday that allows the residents to schedule appointments for the next 12 weeks.

Of the 179,276 people who were on the county’s Phase 1A waitlist, 41,800 appointments have since been scheduled, and 85,000 are pending, Moskowitz said. Another 29,000 people canceled their registration on the waitlist.

“As we’re moving into new phases we have to keep thinking about how we get to those people who don’t want the vaccine, are afraid of the vaccine, to try to help them see how important it is that they get it,” she said.

The announcement Wednesday came as the state prepares to loosen some coronavirus restrictions Sunday, and as cases throughout Pennsylvania and the country have started to rise again.

As of March 31, 35 counties in Pennsylvania were showing a rise in new cases over the past two weeks, a Spotlight PA analysis shows. New cases statewide have averaged 4,034 per day in the past week — a 67% increase over the seven-day moving average from March 8, which recorded the lowest moving average since Nov. 3.

Beginning April 4, restaurants can loosen restrictions related to alcohol service, and capacity limits in restaurants, gyms, casinos, theaters, and malls will be increased to 75%, Wolf announced said in March.

During a press briefing Wednesday, Acting Secretary of Health Alison Beam was questioned about whether it was safe to ease restrictions before all restaurant and public-facing service workers are eligible to be vaccinated.

Beam pointed out that requirements for masking and physical distancing remain.

“The incremental relaxation that starts on Sunday is not just flipping the switch entirely,” Beam said. “It’s allowing us to lightly progress through the relaxation of mitigation efforts while closely monitoring how folks are complying.”

The health department is using its data, combined with data from providers, to understand how their scheduling is progressing, she said.

A “game changing” increase in vaccine supply will also make it easier and more predictable for providers to schedule appointments, Beam said.

Officials in Lancaster County said that they are confident that they’ll be able to comply with the state’s new timetable. Last week, Commissioner Josh Parsons said the site’s waitlist had grown to about 100,000 people.

Since then, the county mass vaccination site in Lancaster received 21,000 doses from the state  — up from 14,000 the week before — and will ramp up to scheduling 3,500 appointments per day over the next six days, Dr. Michael Ripchinski, site director for the Lancaster County Community Vaccination Center and chief clinical officer with Penn Medicine Lancaster General Health, said in a statement.

By April 7, the site will be able to administer more than 6,000 appointments per day.

Some advocates and lawmakers are still concerned that members of the Phase 1A population are being left behind.

About 74% of Pennsylvanians 65 and older — or about 1.78 million people — have received at least one dose, according to Centers for Disease Control and Prevention data updated Wednesday. 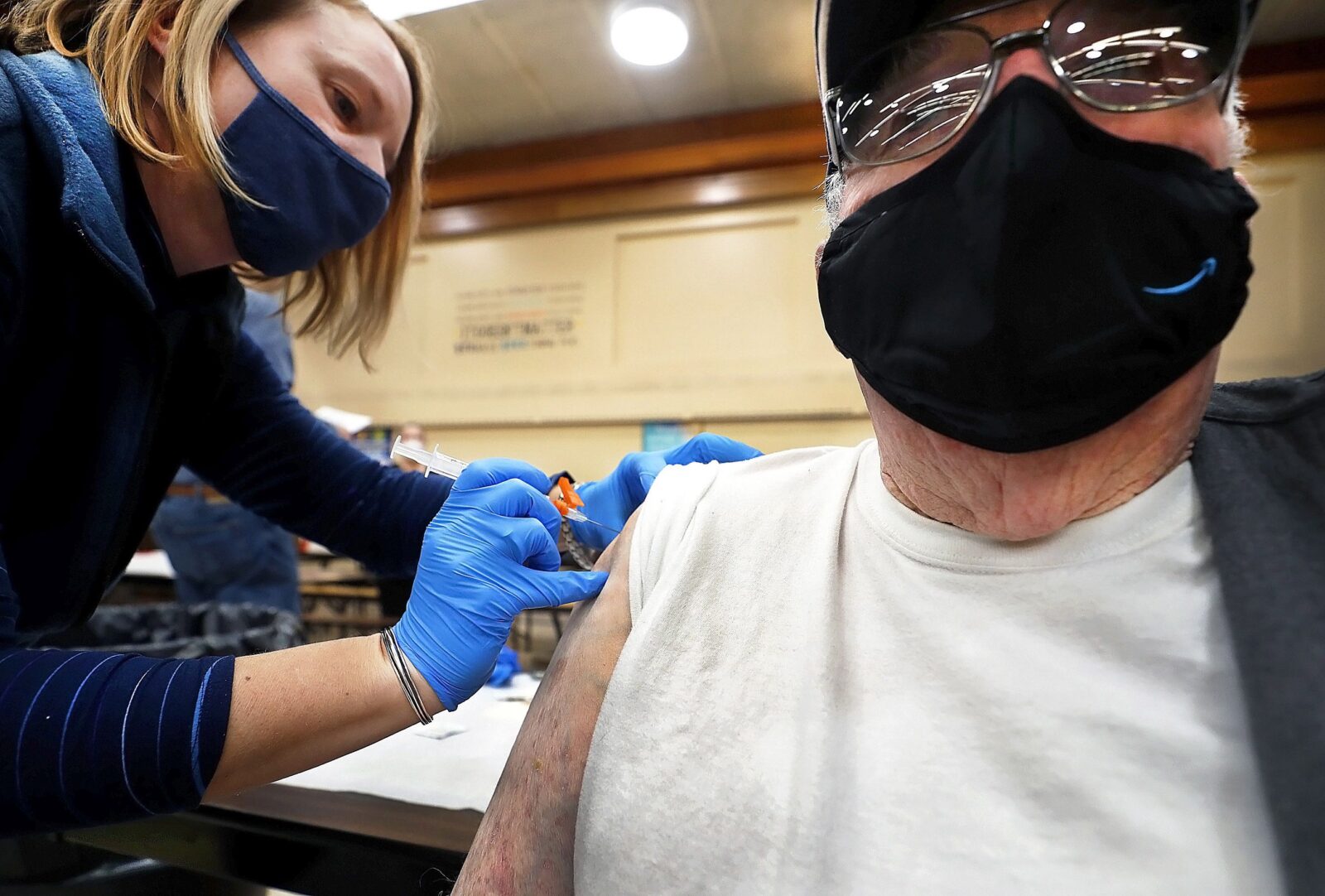 Amber Pedro, a volunteer from Family Practice Laporte, administers the vaccine into the arm of Robert Keen, 84 of Forksville, in the cafeteria of the Sullivan County Elementary School. (Fred Adams / Spotlight PA)

Johnston-Walsh pointed out that that age group, along with people older than 50, made up the majority of severe cases and deaths in Pennsylvania.

As eligibility expands, he said that he worries older, more vulnerable residents will have to compete with even more people for appointments.

He said he has heard from people in southeast and central parts of the state who have been able to secure appointments, but have to travel 35 minutes to an hour — and make the trip twice, once for each dose.

That’s also the case in the western part of the state, where Sen. Lindsay Williams (D., Allegheny) said she’s heard from constituents who are still struggling to secure appointments.

“How do we know if we’re done with 1A in an area without having a list?” Williams said. “I don’t know how we shift doses and make decisions like that without knowing where the demand is.”