Camille Redman, 25, of the Pittsburgh area, never saw herself as an activist. However, when a white friend, upset by the comments she heard in her predominantly white neighborhood in the aftermath of George Floyd’s death, reached out, wanting to organize a protest, Redman couldn’t refuse.

A biracial woman, Redman had experienced her fair share of struggles because of the color of her skin. She was ready to take a stand. Until that moment, she’d never considered she might become a powerhouse who would lead hundreds of protesters through the streets. However, after circulating ideas in a group chat, word spread quickly. The next day, a crowd formed in a McDonald’s parking lot. Businesses donated water, masks and snacks. City officials came to support. They worked with community police to keep the protesters safe.

A crowd of about 600 protesters on June 5 marched without incident along West Liberty Avenue in the borough of Dormont, Pa. Near the mouth of the Liberty Tunnel, which connects the borough to neighboring Pittsburgh, they took a knee during an eight-minute, 46-second period of silence to protest the death of George Floyd, a 46-year-old black man, who was killed May 25 in Minneapolis during an arrest for allegedly using a counterfeit bill.

“I think it speaks volumes to the character of all of the people that have been protesting — especially white people,” said Redman. “It takes a lot for a white person to understand their privilege, but it takes twice that amount of courage for them to go out and use it as a platform to speak on the things that are going wrong in the world.” 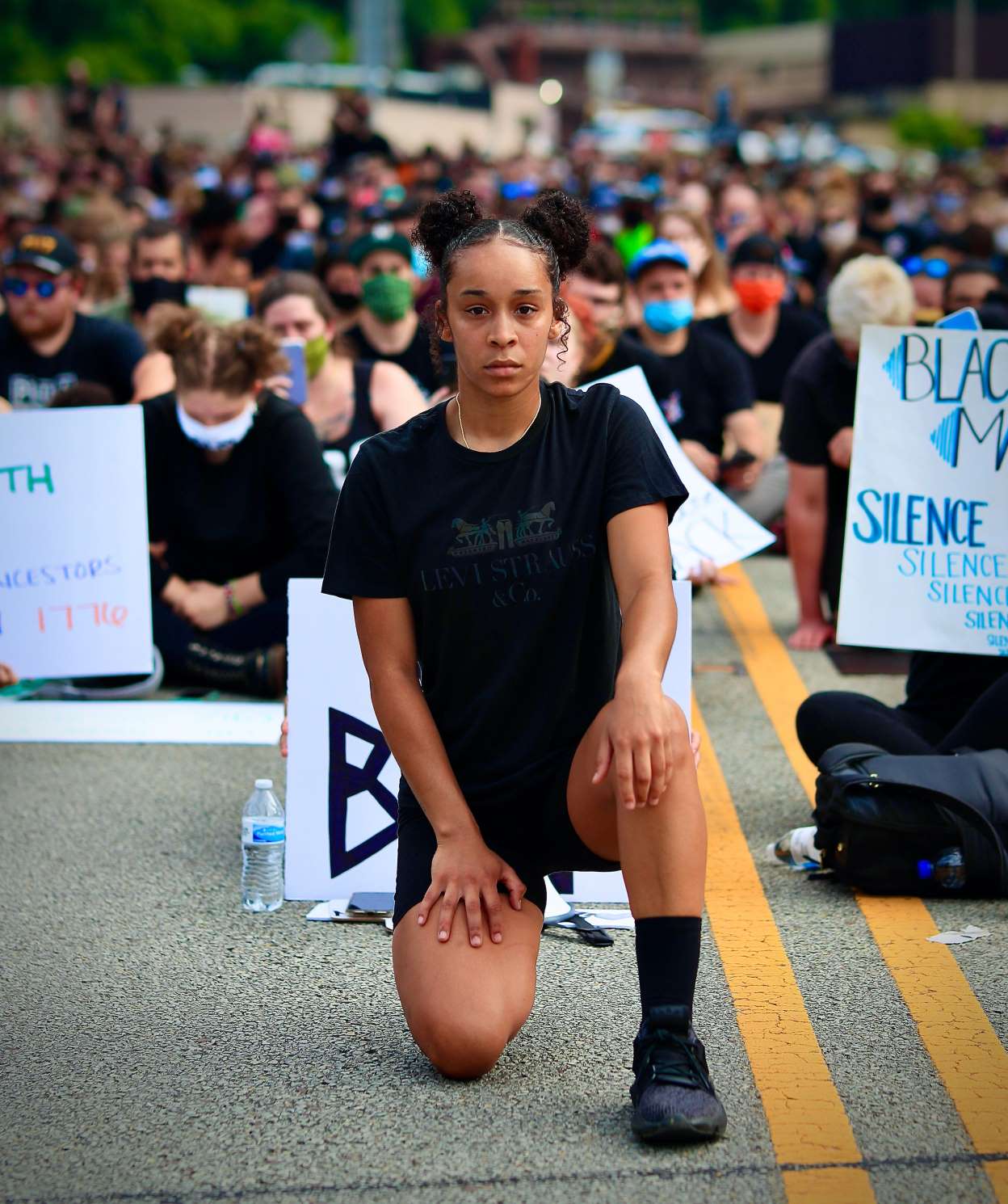 Camille Redman, 25, and about 600 protesters, take a knee during an eight-minute, 46-second period of silence on June 5 in Dormont, Pa. to protest the death of George Floyd. A second protest was planned for June 11. (Photograph/courtesy of Emmai Alaquiva)

Why are you protesting?

Because I am a woman of color. For a long time, people of color haven’t had a voice, and if we did, nobody paid attention. So, I’m trying to use my half-white platform to let my half-black struggles and pain be known as well. I want people to hear the black community and think of us as people who just want the same as everybody else.

I don’t want to be fighting the same fight 50 years from now. It’s our generation’s turn to stand up in a fight for you and the younger generations below to give you guys a fair chance in this world.

What do you think is the most common misconception being put out about protesters right now?

That we’re violent. For so long, America has written this narrative that black people are violent. Black people can’t gather in large crowds because some type of violence happens, whether it’s a fight or someone getting shot. I want people to know that we are not violent. I led a protest of five to 600 people last Friday with not one incident.

I feel like the conversation around these protests is so much different from before. I feel like the response was always more like, what should he or she have done to change the police response? But now it seems like it’s shifting to, why did the police do that? Why do we allow this systemic thing to happen?

At first, a lot of people categorized the protests as something violent. But this is coming from a place of pain, a place of trauma. And it isn’t just this situation that brings the pain and trauma. It’s sewn into the black community. It’s passed down from generation to generation because nothing has changed. People are starting to educate themselves on the systemic racism and the oppression that is all sewn into America. People aren’t breaking things and destroying things for the fun of it. They’re doing it because they’re angry, and we’re seeing a physical representation of pain.

What is your plan of action if violence or riots break out at a protest?

We had marshals in green vests on each side of our protest. We had a group text going with the leaders who were at the front who were in constant communication and looking out for troublemakers. We also came up with a safe word that we handed out to people by word of mouth. If we said the word over the megaphone, everybody was to drop to one knee because that meant there was some person being violent and the person could be singled out. Our plan was a way to show that those people are not with us. If they’re inciting violence, they’re not a part of the movement.

Why do you think it is important for people in Pittsburgh, around the country, and around the world to protest?

All of the great changes that have ever happened in America have come from protesting, whether it was the boycott of public transportation that lasted 300-something days, or the civil rights movement that went on for years.

I’m really proud of the people who are going out and organizing these protests because it shows that something has to be done.

It’s not just black people saying, hey, our houses are on fire. It’s Asian people. It’s white people. It is African people. It is people from England and all of these great places who are saying, “Hey, their house is on fire. We need to help put it out.”

What do you wish that police officers would understand about your point of view?

I think the main thing that I want officers to understand is that we’re not attacking all officers. We are coming after the police officers who bring their own personal beliefs to work with them. You can’t police a predominantly black neighborhood (with those beliefs). We shouldn’t have to police the police.

That’s all we’re asking — do your job as an officer of the law — because when you go home and you take that badge off, and you’re a dad and you’re a husband and a friend, that’s fine. You know, I respect that, but I can’t go home and take my skin color off. I don’t get to hang it up on a hook 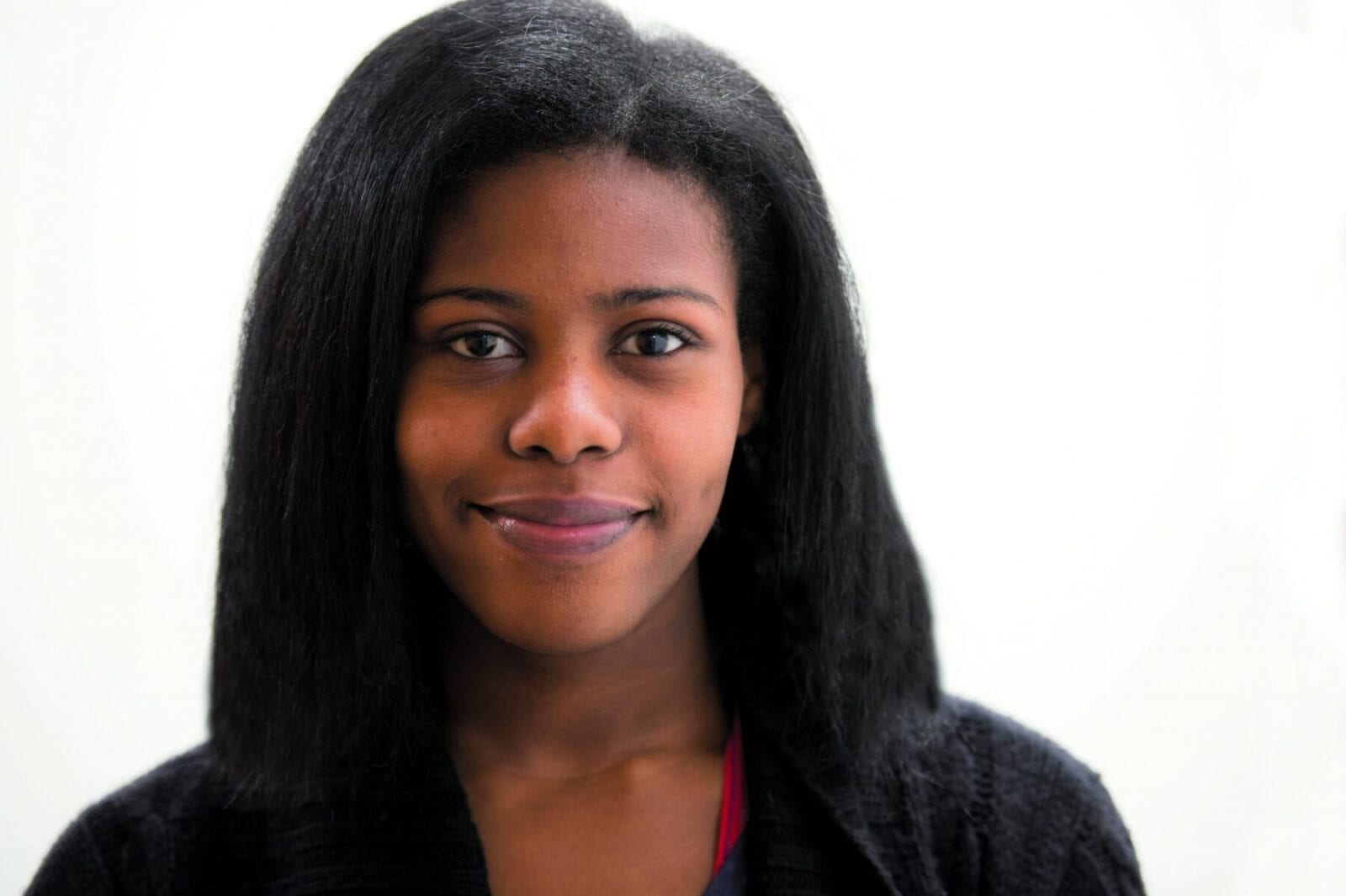 Ayisat Bisiriyu, 16, is a writer with iGeneration Youth, a news service featuring the work of youth around the world. She enjoys reading, writing, acting, and cooking.

The Postindustrial Podcast: The rising threat of extremism on U.S. soil

The Postindustrial Podcast, Episode 7 out now