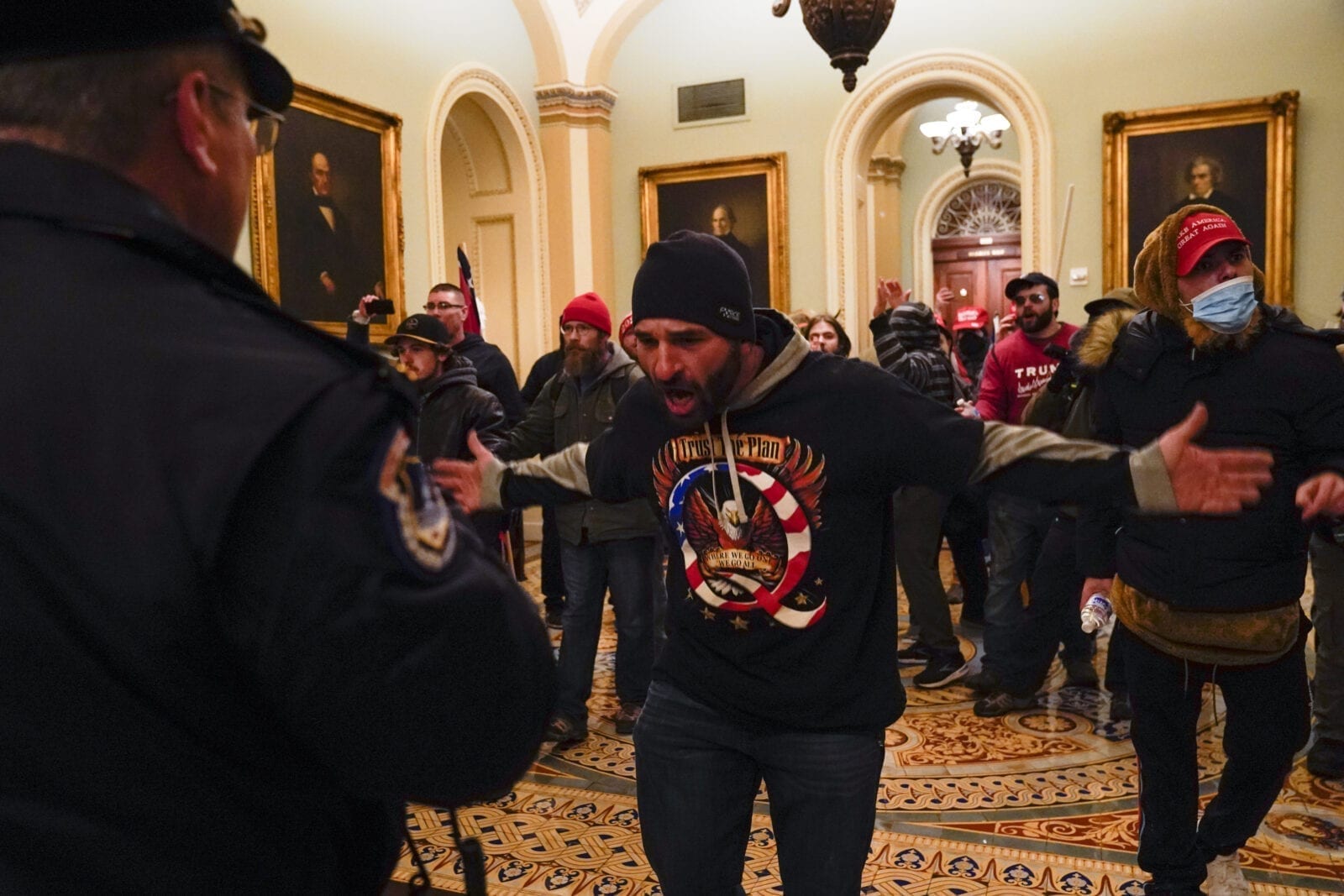 Protesters gesture to U.S. Capitol Police in the hallway outside of the Senate chamber at the Capitol in Washington, Wednesday, Jan. 6, 2021, near the Ohio Clock. // AP Photo/Manuel Balce Ceneta

If the Jan. 6 Capitol coup attempt taught us anything, it’s that reality in America is not a “shared experience.”

Many of us saw the attack on the Capitol for what it was: an assault on our democracy by a horde of misinformed Americans fueled by false claims of election fraud, QAnon conspiracies, and a myriad of Trumpian grievances too asinine to repeat.

From The Daily Beast:

Lemme get this straight. Hundreds of people break into the Capitol — the cathedral of American democracy — in an attempt to disrupt the ratification of a presidential election while destroying property, smear human feces on the walls, beat police and chant “Hang Mike Pence!” is not an act of insurrection or a coup attempt. 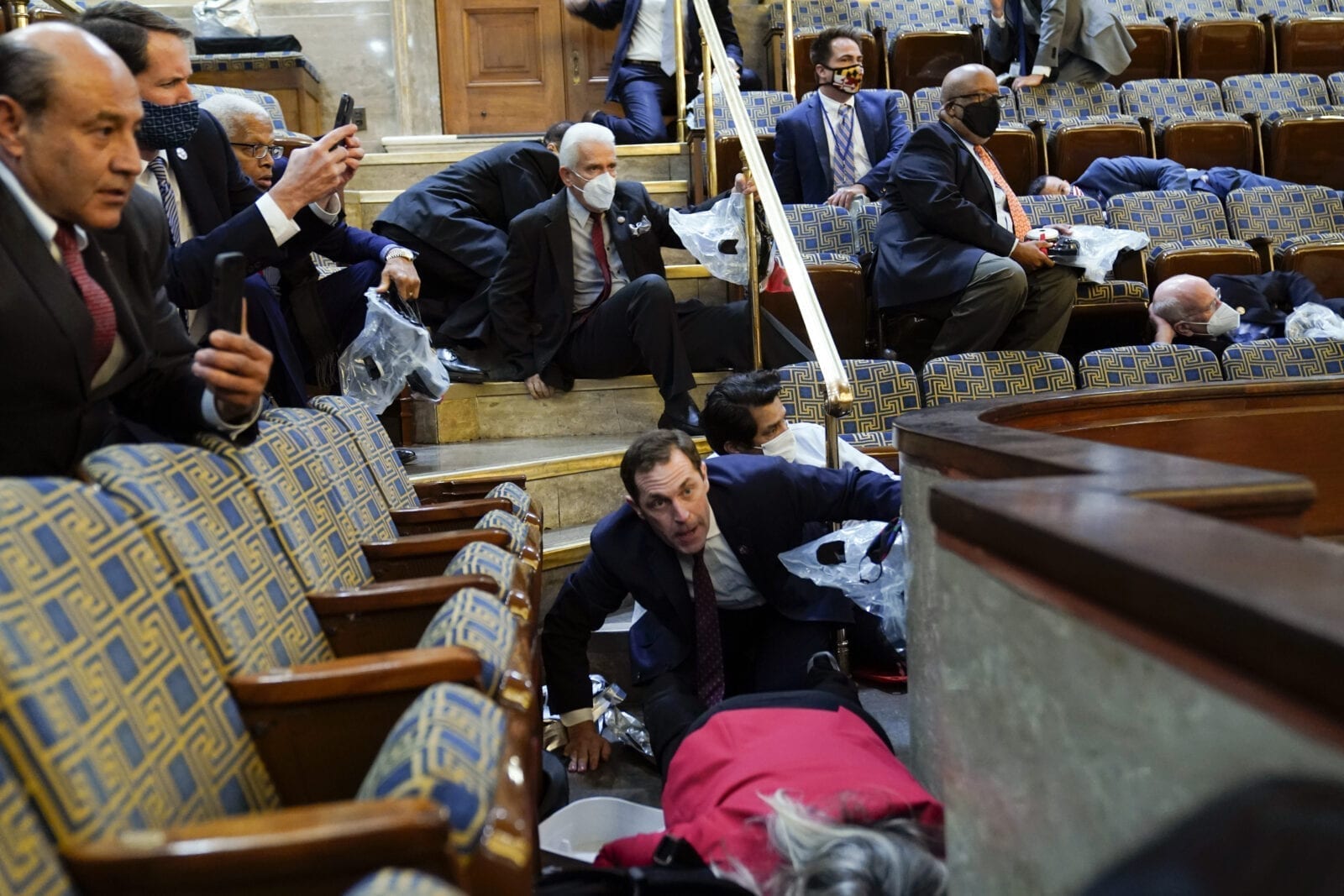 People shelter in the House gallery as protesters try to break into the House Chamber at the U.S. Capitol on Wednesday, Jan. 6, 2021, in Washington, D.C. // AP Photo/Andrew Harnik

This brand of mental jujitsu practiced by Carlson has been all-too-common since last year for so-called “conservative” media personalities like him and Fox propaganda brethren Sean Hannity, whose text to Trump Chief of Staff Mark Meadows indicate he was privately worried about the beast he and Trump’s other minions unleashed that day.

Regardless of what new damning  information comes out of the Jan. 6 Committee findings implicating Hannity and others in the events of last year, some folks, many who live among us in Postindustrial America, just don’t share our reality.

Whether it’s willful manipulation of the facts by the likes of Carlson, Hannity, and the rest, or true belief based on said manipulation, is irrelevant at this point.

Because the problem we face as a nation is not the growing political divide between Dems and the GOP, rather it’s our inability to agree on what we see with our own eyes.

For some, those that were beating police with flagpoles and spraying mace into their eyes weren’t a violent mob spurred on by Trump’s neverending grievance rhetoric. No siree. They were operatives of the Deep State sent to the Capitol by the FBI to undermine Trump’s righteous victory over the forces of evil that had rigged the election in order to oust their Dear Leader.

On this, the one-year anniversary of the Capitol coup attempt, I’m left asking myself:

“What do we do with these folks who are so consumed by grievance and lies?”

Hoping to find some clarity, and perhaps a clue as to how we move forward from here, I went back to what I wrote for Postindustrial the day after the American Experiment was nearly brought to its knees by the deluded masses and found this:

“ … what to do with  those Americans who were duped by his dangerous lies into thinking they were acting as patriots? And the millions more who have digested and regurgitated his anti-Democratic pablum?”

After a year of pondering the problems made so apparent by the attack on the Capitol that day, it appears I’m no closer to finding a cure to our National Sickness.

So much for being a year wiser.

Instead, I’m even more confused than I was that fateful day.

Meanwhile, America is somehow even more fractured along reality lines due to the increasing chorus of Trumpian acolytes like the recently Twitter-banned Georgia Rep. Marjorie Taylor Green and co-conspirators Lauren Boebert, Matt Gaetz, Paul Gosar, and others.

Hopefully there are people far smarter than I working on a solution.

America’s future depends on it.