Two decades ago, the mere act of writing about people who talked publicly about taking up arms provoked ire.

Today, people taking up arms are all around us — with, as we saw in Wisconsin and Oregon, sometimes deadly consequences.

In 1995, I wrote a newspaper story focused on rural Crawford County, Pa., about a growing movement of people who feared the federal government was weakening their rights. Some took as proof of that government standoffs in Ruby Ridge, Idaho, and Waco, Texas, that resulted in civilian deaths. Then, a Gulf War veteran blew up a federal building in Oklahoma, hoping to inspire a revolution. It was clear even then, simply from talking to people, that the anger and mistrust was more than just about any one candidate and any one incident. 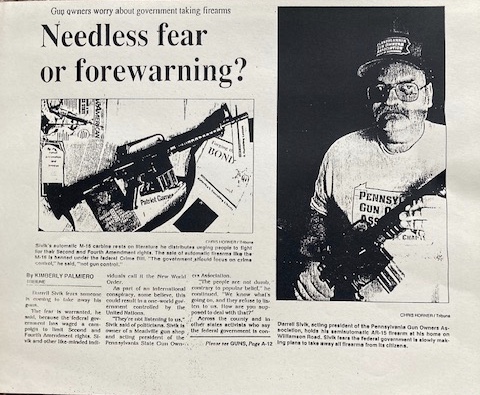 A reported story by the author published by a Pennsylvania newspaper in the late 1990s.

Other media outlets picked up the story. The Washington Post sent a journalist to town, resulting in a report with the headline “Grass roots rage.”

The Post said “the mindsets forming here are important largely because this community is so ordinary, a stand-in for countless towns across the nation’s vast, still rural heartland.”

Readers of my story were shocked and furious — at me. The chamber of commerce called my editor and complained. Another group called and said I should be fired. The voicemail on my phone was full. One woman talk-screamed a message: “WHY CAN’T YOU WRITE ABOUT THE ‘GOOD NEWS’?”

It was “my fault.” Yet another voicemail summed it up: The community would be known as the “town with gun nuts.”

But in talking with people, it was clear there was a bitterness and mistrust that was palpable. Some felt the federal government was over-regulating but not giving back.

That’s always happened — but those folks were louder and there were more of them than there had been before.

“They’re not listening to us,” Crawford County resident Darrell Sivik said back then about elected officials. Sivik was acting president of a newly-formed, statewide gun owners association. “The people are not dumb, contrary to popular belief. We know what’s going on and they refuse to listen to us. How are you supposed to deal with that?”

Today, the disaffected are everywhere and of all backgrounds. We can’t not see it.

It’s easy to label people who feel their government does not represent them. But they don’t go away.

“Any movement can be a threat to society as a whole,” then-professor William DeLamarter, whose field of study was social psychology, said at the time. “The extent to which they feel alienated and dislocated is what matters.”

But sometimes, instead of listening, we blame each other — or the messenger.