Bhagi Pesara organizes food for distribution through Baba's Yard, a local program to help the needy, at the Brooklyn Recreation Center, Tuesday, May 26, 2020, in Brooklyn, Ohio. Charities like Baba's Yard are playing a more important role than ever in feeding the community amid a pandemic that''s led to historic unemployment rates.  (AP Photo/Tony Dejak)

Lisa Hamler-Fugitt says her state of Ohio is quickly depleting supplies of food for the needy as they attempt to meet the crushing demand amid historic jobless rates.

“We have no choice but to sound the alarm bells right now,”  Hamler-Fugitt,  the executive director of the Ohio Association of Foodbanks, said on Friday.

“The situation is changing literally day to day and the demand will only continue to increase. Supplies are just declining at rates you could never imagine. We have never experienced anything like this. We have to get people stabilized and ensure their basic needs are met.”

Organizations across the Rust Belt and Appalachia are scrambling to keep up the crushing need for food as the nation’s jobless rate reaches levels that could outpace the Great Depression.

In the last month, unemployment compensation claims have climbed to 22 million, a figure that’s sure to spike in the coming weeks as independent contractors and sole proprietors are permitted to file for benefits in their respective states under a new federal program.

“We have no choice but to sound the alarm bells right now."

The demand for food — and fear of bare pantries at a time where movement is limited — have sent millions of Americans to a patchwork of nonprofits and other organizations for dry goods and produce in the last month.

The Ohio Association of Foodbanks is a network of 12 food banks serving 3,600 member charities. About one-third of those member charities closed in the last week, Hamler-Fugitt said. Many are community programs operated by volunteers, who may be at higher risk for contracting the novel coronavirus.

“We are now into week four so a lot of these families who weren’t making it before are now completely desperate and that anxiety is really manifesting itself,” she said. “They’re saying, they have nothing. So we need the public systems to work. We need people who are eligible for SNAP to be on SNAP. We need people who are eligible for unemployment to get their benefits.”

Nationwide, Feeding America, a network of food banks, has never had an event impact its 200 partners in its 40-year history like the current pandemic, communications director Zuani Villarreal said.

“The pandemic is impacting food banks not just with an increase in demand, but also a decrease in resources and a forced shift in distribution models to keep staff, volunteers, and the neighbors we are helping safe,” he said. “That mix of circumstances is truly unprecedented.”

Since the beginning of the COVID-19 crisis in March, about 60 percent of Feeding America partners report less inventory and about 40 percent reported a funding shortfall.

In Pennsylvania, a Feeding Task Force exploded to more than 200 people from the public and private sector to try to work together to find supplies and support communities in food distributions. They meet twice weekly by phone.

“The food bank and food pantries are seeing a tremendous increase,” said Christine Heyser, mass care coordinator for the state Department of Human Services who is leading the Feeding Task Force. “In four weeks the needs still are going to be acute. This is not going away.”

The group brainstormed outside-the-box solutions to give families more options. This past week, the national nonprofit Operation BBQ Relief began serving ready-to-cook meals across the state, with plans to distribute 180,000 meals weekly for four weeks.

“No other state is doing a feeding program of this scale — meals are getting out the door this quickly with Operation BBQ,” Heyser said.

In Pennsylvania, people can take a survey to report difficulty in accessing food. Take the survey here.

Feeding Pennsylvania Executive Director Jane Clements-Smith said that her organization’s network of nine food banks that distributes through more than 2,500 agencies is spending more than $1 million per week to meet the need, which keeps growing.

“My bigger concern is if this is going to go on for months and we are going to have a need to go to the end of the year,” she said. “We don’t expect food drive donations anymore and it’s because we can’t ensure the safety of where they came from and whose house they came from, so time is of the essence and we are doing these mass packing of boxes and we need a lot of every commodity.

“People had their paychecks and they did the best they could, but those people who now don’t have a paycheck, they still have a mortgage, rent, car payments. They just don’t have enough to make ends meet.”

In Indiana, Feeding Indiana’s Hungry works with 11 food banks to distribute food to more than 1,700 food pantries and other local programs. Some reported last week running out of food before all the clients were served, Executive Director Emily Bryant said.

The food banks have to purchase more — as opposed to relying on donations — at a higher price, she said. 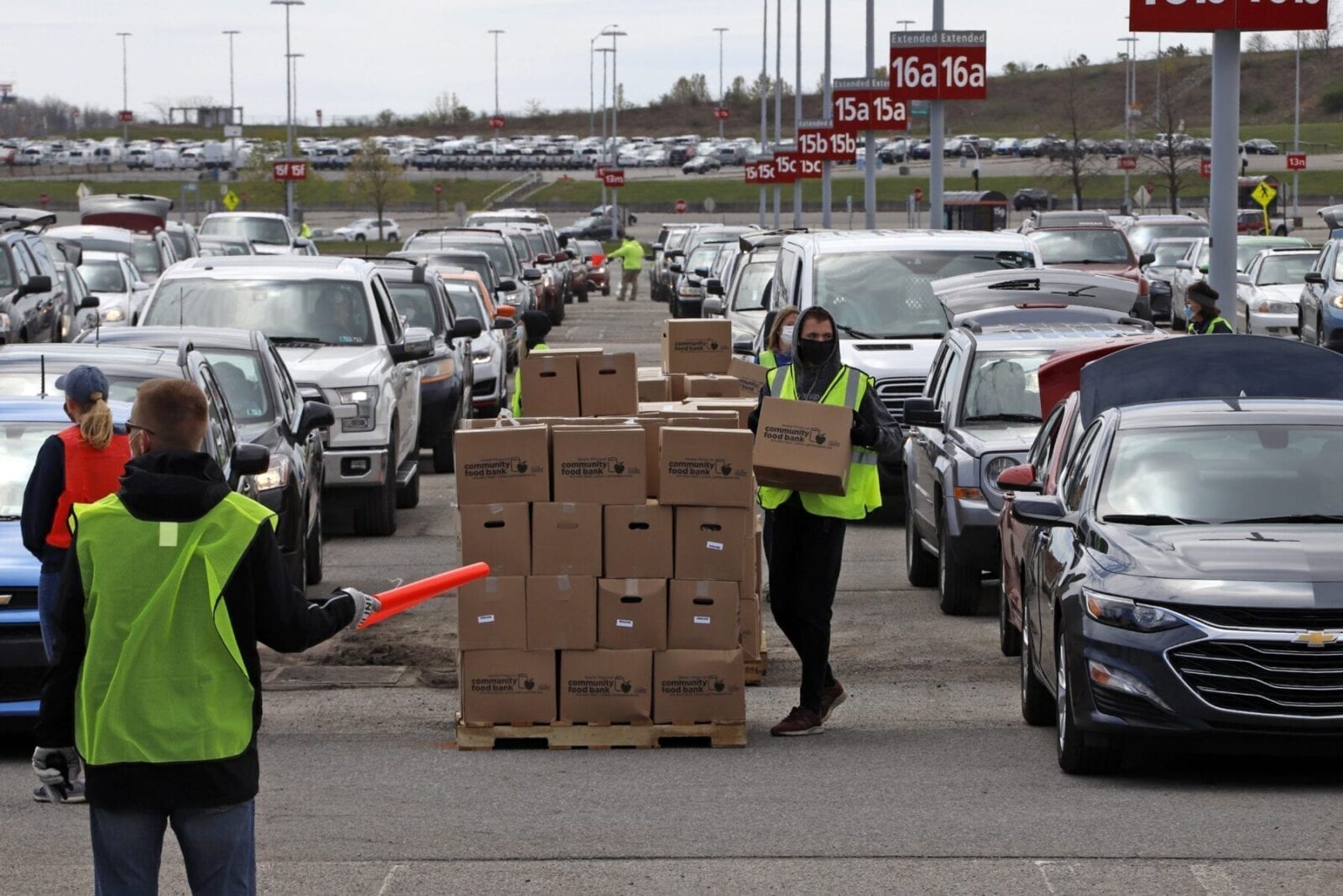 Using part of the Pittsburgh International Airport parking lot, that has been left vacant by the COVID-19 pandemic, volunteers from the Greater Pittsburgh Community Food Bank, load boxes of food into cars during a drive-up food distribution, Wednesday, April 22, 2020. (AP Photo/Gene J. Puskar)

In Kentucky, the nonprofit New Roots this past week just began taking orders for biweekly produce boxes, to start in June, and nearly 200 people signed up. They can provide up to 1,000 shares a week, with produce grown by about 10 local farmers. People pay according to income.

What can the average consumer do? Clements-Smith advises: Put the brakes on panic buying.

“When we see panic buying at grocery stores that leads to shippers and manufacturers having to quickly replace that food and we also have orders and our orders get bumped because of retailers. We rely heavily on donations to purchase food from manufacturers. It means there’s less for everyone else.

“I have never had so many people say ‘my husband and I lost our jobs. We have two kids. We have never been in this situation before. What do we do?’ she said.

“That is the most heartbreaking thing I’ve ever heard, and it happened overnight.”

For help, call 211 or look up 211.org for resources throughout the country. 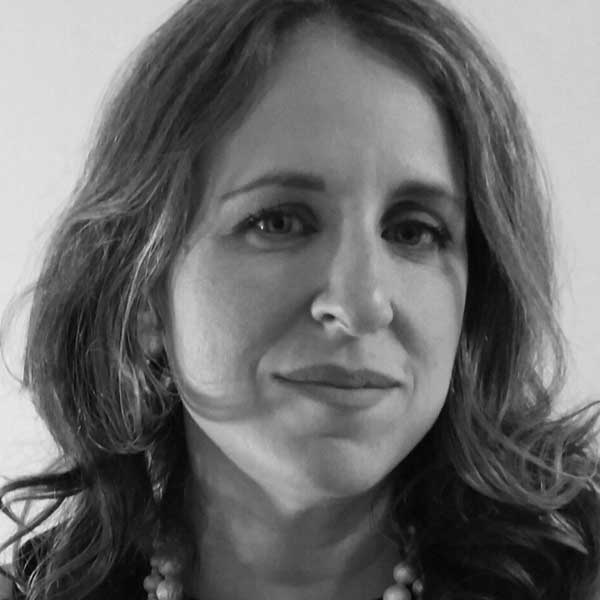 Kimberly Palmiero is CEO and Editor-in-Chief of Postindustrial. She also is a senior editor for iGeneration Youth and immediate past president of the nonprofit Press Club of Western Pennsylvania. A small business owner, she also was a managing editor for Trib Total Media. Reach her at kim@postindustrial.com 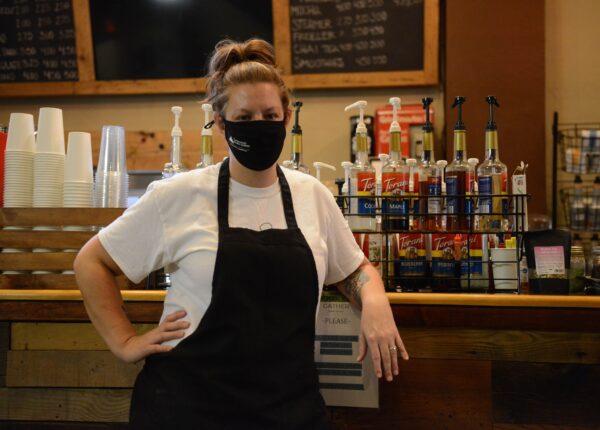 Financially distressed Pa. towns faring better than expected, while others in pain 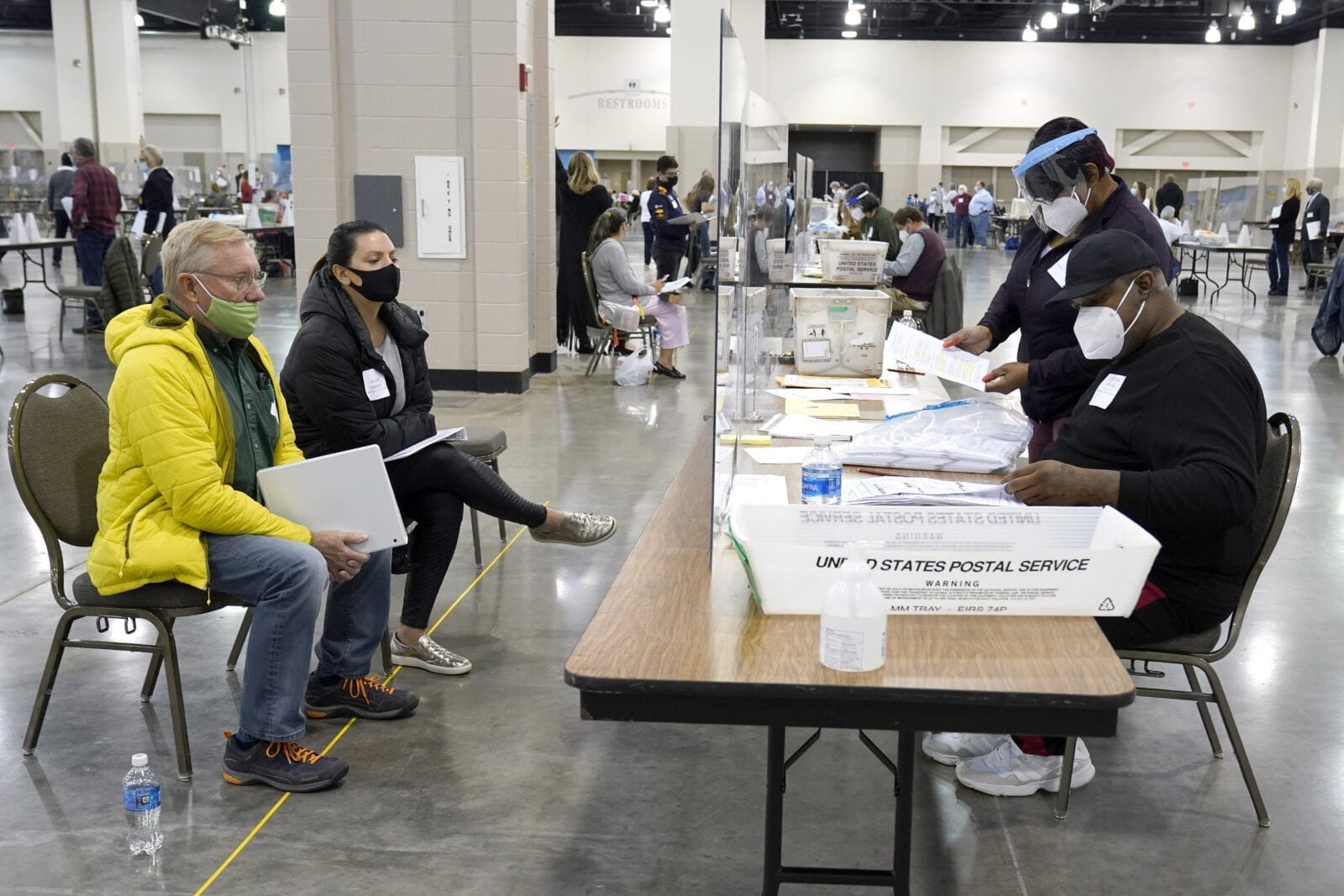 Trump’s recount in Wisconsin seeks to throw out ballots 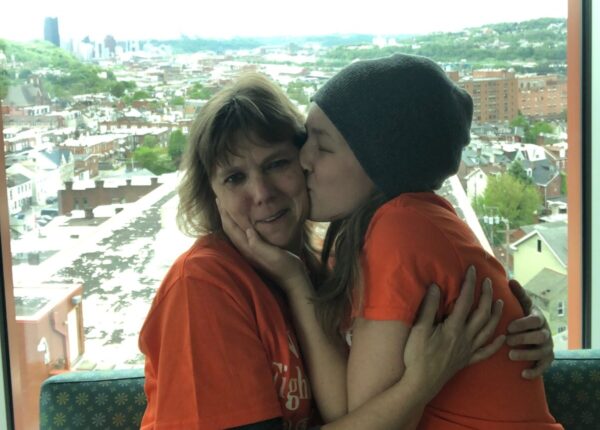 What one vote meant to one Pennsylvania mom 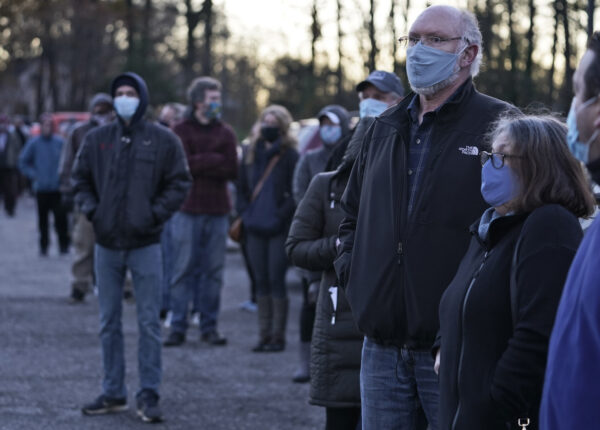 Amid upheaval, people vote in record numbers across the region