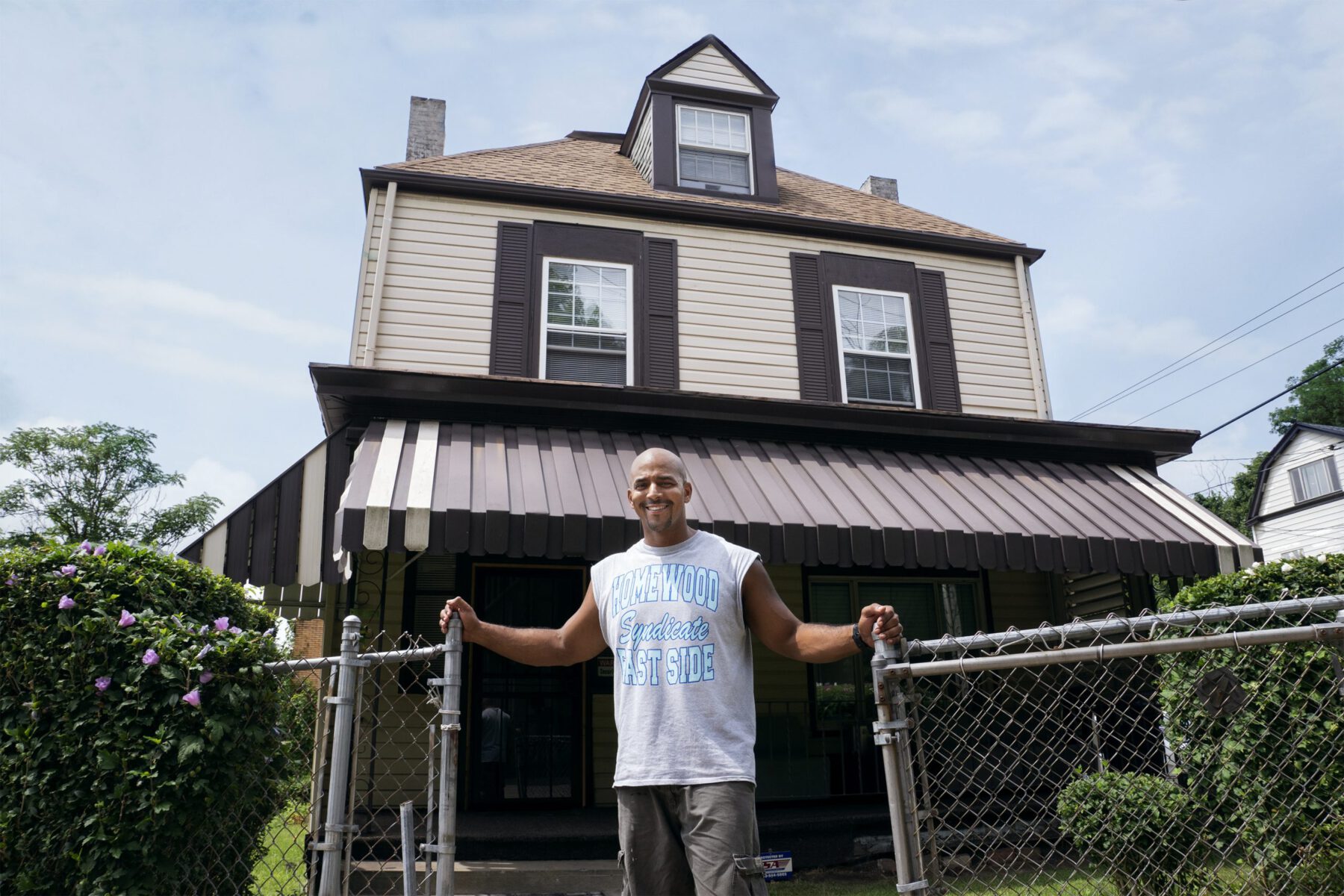 Dante Works, owner of House of Veterans, in Pittsburgh, Pa.

Dante Works, owner of House of Veterans, in Pittsburgh, Pa.

At House of Veterans, those who served get a home — and much more

After he was discharged from the U.S. Army, Kyle Parpart’s life started to crumble.

The Army veteran, who came home from Iraq in 2012, was arrested for failing to pay fines. He went through the state Veterans Court, which provides mental health treatment in lieu of incarceration for minor crimes. Parpart spent a few days in a homeless shelter after his release in 2017, and he felt despair – until a Marine connected him to Dante Works, who owns House of Veterans.

Parpart moved into a room in a house located in Pittsburgh’s Homewood neighborhood – one of three houses plus a one-bedroom apartment operated by House of Veterans, funded by Bridgeway Capital. There, he got the moral support and stabilization he needed. After about 10 months – during which he met his fiancé, Kelli McIntyre, online – Parpart started a new life. He moved to Corry, Pa., enrolled in an electrician-training school, and had a baby girl, Addilynn, with McIntyre.

“I would say they literally saved my life. Dante was there not only for me, but he was there for all the guys,” says Parpart, who made Works his daughter’s godfather. “He was there for me every step of the way, 110 percent.”

Works’ grandfather was a military veteran, but that is not what inspired him to start House of Veterans. Spending about 13 years as a probation officer for adults in Allegheny County, and spending time working with Veterans Court, showed him how many local veterans were homeless. Works attended graduation ceremonies for people leaving the Veterans Court system and trying to integrate back into society – a difficult road.

“It was the stories the veterans told at graduation,” he says. “It awakened me to know that veterans served the country but are yet homeless and living on the streets.”

Works recalls an especially poignant story from a man who served in the initial invasion of the second Iraq war and got injured. The Army veteran was traumatized, but he didn’t get much support for transitioning into civilian life when he returned home. His prescriptions for painkillers were pulled, so he started abusing opiates. The 20-something man’s life unraveled when he started abusing opiates, and he landed in Veterans Court.

Drug addiction, depression, PTSD and homelessness are the most common problems Works sees in clients who come to House of Veterans, where they get free housing. Then, they get help connecting to resources that will help the veterans return to civilian life and find a decent job. These veterans have skills that are valuable to civilian employers, Works says; they just need help getting stable and redefining their lives.

“You’ve been conditioned to service … and think ‘We’re here to fight and we’re here to kill.’” Works says. “You’re supposed to just turn that off when you come to Pittsburgh, but it doesn’t work that way.”

Works opened the first House of Veterans home in August of 2017. He renovated the run-down houses, which have a total of 16 beds, mostly himself with the help of lending from Bridgeway Capital. Prior to that funding, Works had been using his own limited capital and credit cards. The all-male residences – two of which face each other in the back – have a halfway-house model but the residents get much more, says Works, who considers House of Veterans a “supportive living program.”

The House of Veterans has no specific time frame for how long people live in the houses. Some stay for two years, and some stay for the rest of their lives. They can stay “as long as they are moving forward and making progress,” Works says.

House of Veterans does “whatever it takes to get that veteran to what they think is a place of self-sufficiency,” he says.

“As a probation officer, we used to impose what we believe success looks like on other individuals,” Works says. “I’m very clear when I say I want to help a veteran.”

“The other part is that you’re helping veterans,” Thomas says. “You’re giving them a home, hot meals, and other things … that can help them.”

This story was produced with support from Bridgeway Capital, an economic growth accelerator with locations in Pittsburgh, Erie, and Uniontown, Pa.

Election stories from the region that decided 2016. Delivered weekly to your inbox.