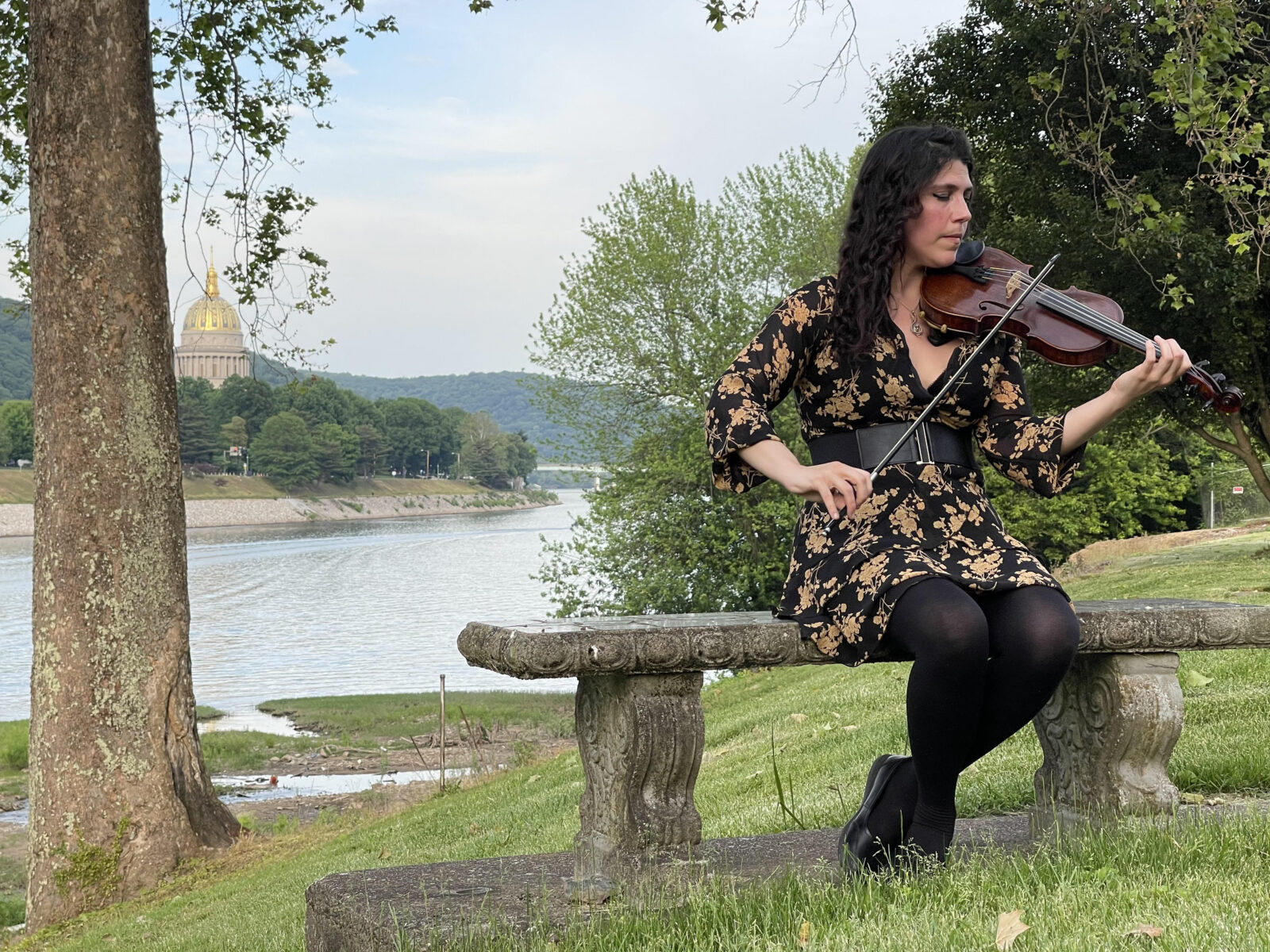 Alasha Al-Qudwah, a musician and teacher, plays the violin along the Kanawha River, in Charleston, W.Va. on Saturday, May 22, 2021. (Photograph by Lindsay Plaskett)

“Wow. Where are we? Northern England?” Jason asks over the communication platform we use to speak to one other and the camera crew while riding.

Eastern Kentucky breeders are known for raising some of the fastest, most sought-after thoroughbreds in the world, and racing is a major contributor to state’s economy. I’m not one for betting on horses, but I know enough about the sport to realize there’s good reason it’s called “the sport of kings.”

We continue heading east, cruising through the Daniel Boone National Forest, more than 700,000 acres of mountains, valleys, and lushness that attracts thousands of campers, hikers, and climbers. I’m betting the park will be a big attraction this summer, considering how cooped up everyone’s been in the pandemic era.

As we ride along the interstate bisecting the forest, I hear a familiar chime in my helmet, press the button on the communicator affixed to my helmet and hear my 5-year-old daughter’s voice in my ear, only slightly muffled by the sound of the wind and my engine’s roar.

“Daddy, I want to show you the pictures I made, but I can’t see you,” she tells me, disappointed we can’t see each other as we usually do when talking on the phone.

I explain to her that daddy can’t make funny faces on the phone at the moment because he’s riding his motorcycle “for work,” which as soon as I say it, sounds as ridiculous to me as I’m sure it does to her.

A short while later, we arrive in Charleston, a city that’s the site of a landmark federal case against drug companies, in which Cabell County and the City of Huntington argue that the companies flooded their communities with opioids — the tragic legacy of which persists.

As we gas up our bikes, members of a motorcycle club come over to check out our bikes and invite us to a barbecue at their clubhouse.

As much as we’d like to attend, we have a previous engagement in the West Virginia capital.

Alasha Al-Qudwah, a local musician and teacher with Palestinian roots is waiting for us at the University of Charleston. We’ve asked her to bring her violin to play us some songs.

Alas, when we arrive at the campus along the Kanawha River, security refuses to allow us on the premises without a permit to shoot, so we head a little but farther upriver along the banks to find a place where we can listen and talk.

“What’s the difference between a violin and a fiddle?” Alasha asks us in the setup for a little humor. “A violin has ‘strings’ while a fiddle has ‘straaangs,’” she quips, while stressing the accent from this area of Postindustrial America.

Alasha says the arts scene is vibrant in Charleston, even though a town has that’s seen its share of hardships, such as: job loss and opioid addiction.

“Charleston may be a small city but it’s very supportive (of artists),” she notes. 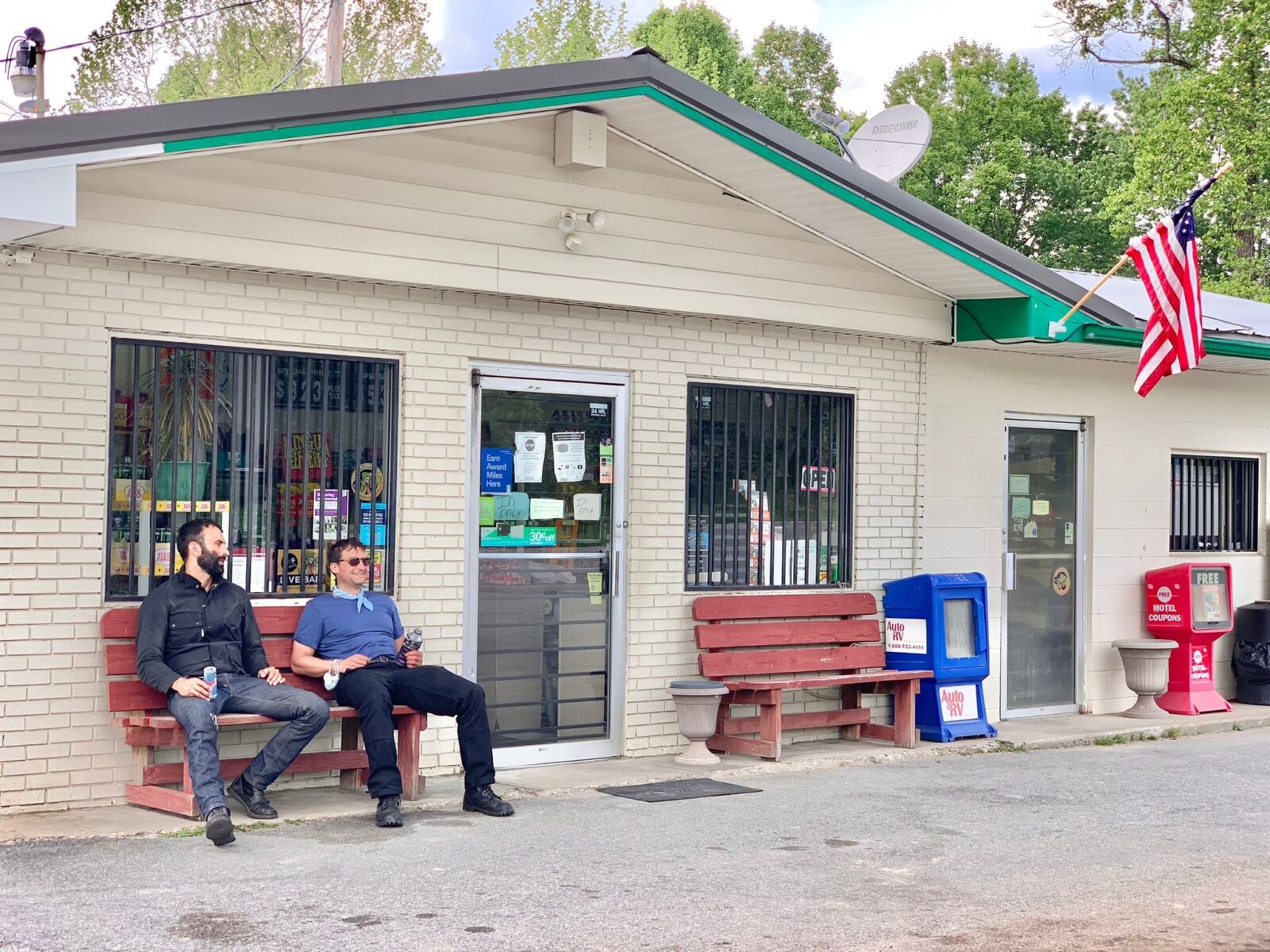 Journalists Jason Motlagh (left) and Carmen Gentile (right), take a break in West Virginia. Both are riding by motorcycle through the Rust Belt & Appalachia. Motlagh is on assignment for Rolling Stone. (Photograph by Matt Cipollone)