The International Free Expression Project commissions art and collects artifacts related to free expression, and most of those thus far have been in reference to — and homage of — print presses from the former Pittsburgh Post-Gazette building in Pittsburgh. Photo by Thom Goertel

Greg Victor had a world-class idea.

In the face of governments crushing dissent, allegations of “fake news,” extremists slaughtering journalists, and militants destroying documents, artwork, and entire ancient cities, Victor, a long-time Pittsburgh Post-Gazette editor who plans to retire from his role as the newspaper’s oped/forum editor next month, envisioned an international free expression institute — one singular place where the public could visit to learn about free expression and its opponents all over the world — in Pittsburgh.

An office relocation, of all things, helped him to decide where it should exist.

“We can do something truly extraordinary — and to do it in the former home of a great newspaper,” he said.

That is if the new owners of that great newspaper’s former home fall into line with the idea.

With a shrinking staff list and declining circulation in late summer 2015, executives at the Post-Gazette’s holding company, Block Communications, decided to relocate the paper’s operations away from the 200,000-square-foot building at the confluence of Pittsburgh’s three rivers.

The PG and its forebear, the Pittsburgh Press, had operated there since 1927. The paper’s editorial and advertising staff moved across the Allegheny River to an office on Pittsburgh’s bustling North Shore. Block Communications sent the PG’s printing operations nearly 20 miles west, to Clinton, near the Pittsburgh International Airport.

Those moves left the iconic, five-story PG building vacant on its top three floors but filled with tons of worn, unused, ink-stained presses on its ground floor. 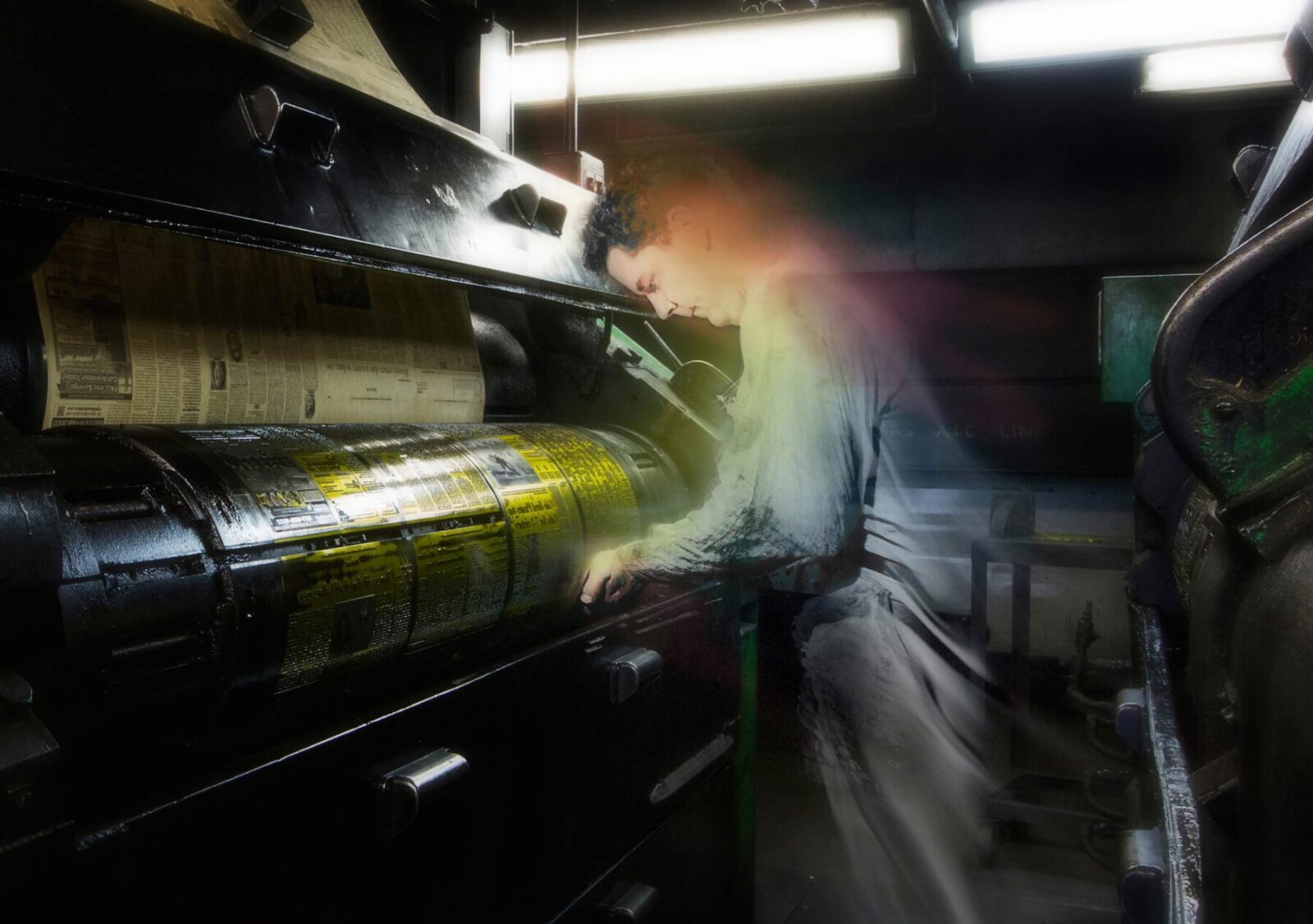 IFEP commissioned the above image from artist Christopher Ruane. It's titled, "The Spirit Lives on In Your Work." 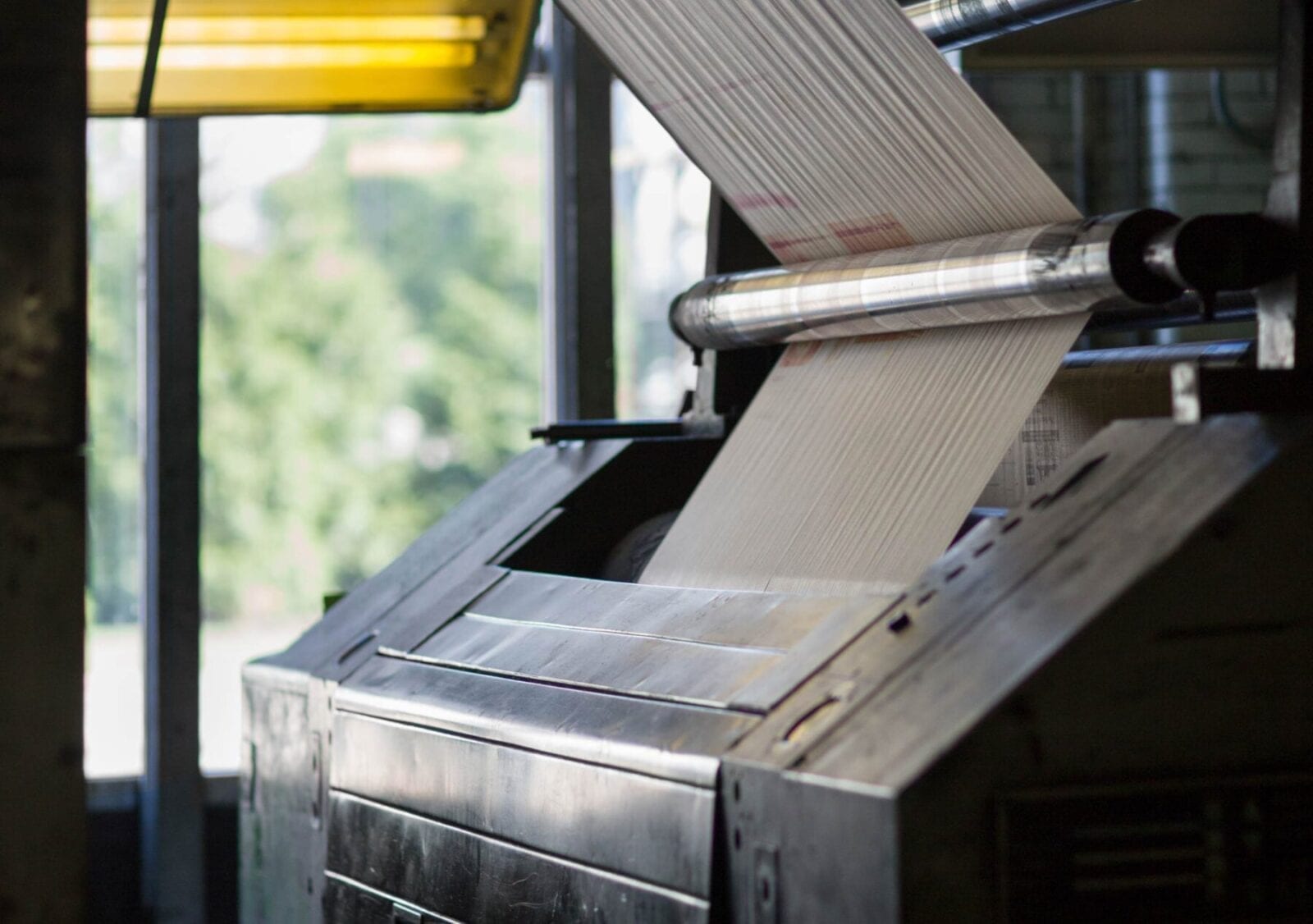 IFEP commissioned this work from April Friges. It's a photograph titled "Newsprint Tension."

Rumors stirred about what the Blocks would do about the property. The Pittsburgh Business Times reported in November 2018 that Block retained Coldwell Banker Richard Ellis (CBRE) to market the building and adjacent land. But buyers were elusive. Then in October, The Business Times reported that New York-based JCS Holdings LLC is pursuing the project. But nothing’s yet been inked.

Victor, nonetheless, seized the opportunity. He assembled an impressive group of advisors, board members, and supporters, and hatched a plan for the International Free Expression Project.

They would work with a fiscal sponsor — New Sun Rising, based out of Millvale — which would allow them to raise money as though they were a nonprofit, while they waited for the Internal Revenue Service to either approve or deny their request to form a nonprofit, 501(c)3 corporation. With the money they’d raise, they would purchase the presses and use them as the centerpiece of an international design competition to create a monument to free expression outside the now-vacant PG building.

They’d then work with the building’s landlord to create, inside the massive and unused press room, a marketplace akin to Cleveland’s West Side Market or the Reading Terminal Market in Philadelphia — an open space for merchants to sell food and wares. That market would, they hoped, have the added value of 90 tons of press artifacts — which the International Free Expression Project has already purchased — scattered throughout the space, along with artworks, photographs, and interactive displays from around the world.

The group envisions the space as a “marketplace of ideas,” Victor said, that would be financially self-sustaining while also showcasing truth-telling work and educating attendees about international threats to free expression and the state of free speech worldwide. He said he plans to work as the group’s executive director upon retirement from the Post-Gazette next month.

“Speaking personally, I think the vision is exciting,” said Bill Flanagan, host of “Our Region’s Business” on WPXI-TV and chief corporate relations officer at the Pittsburgh-based Allegheny Conference on Community Development, which helps to spur economic development projects in the Pittsburgh region. “It’s a fabulous space, it’s got a lot of flexibility, and of course Greg’s building this around promoting important ideas.” 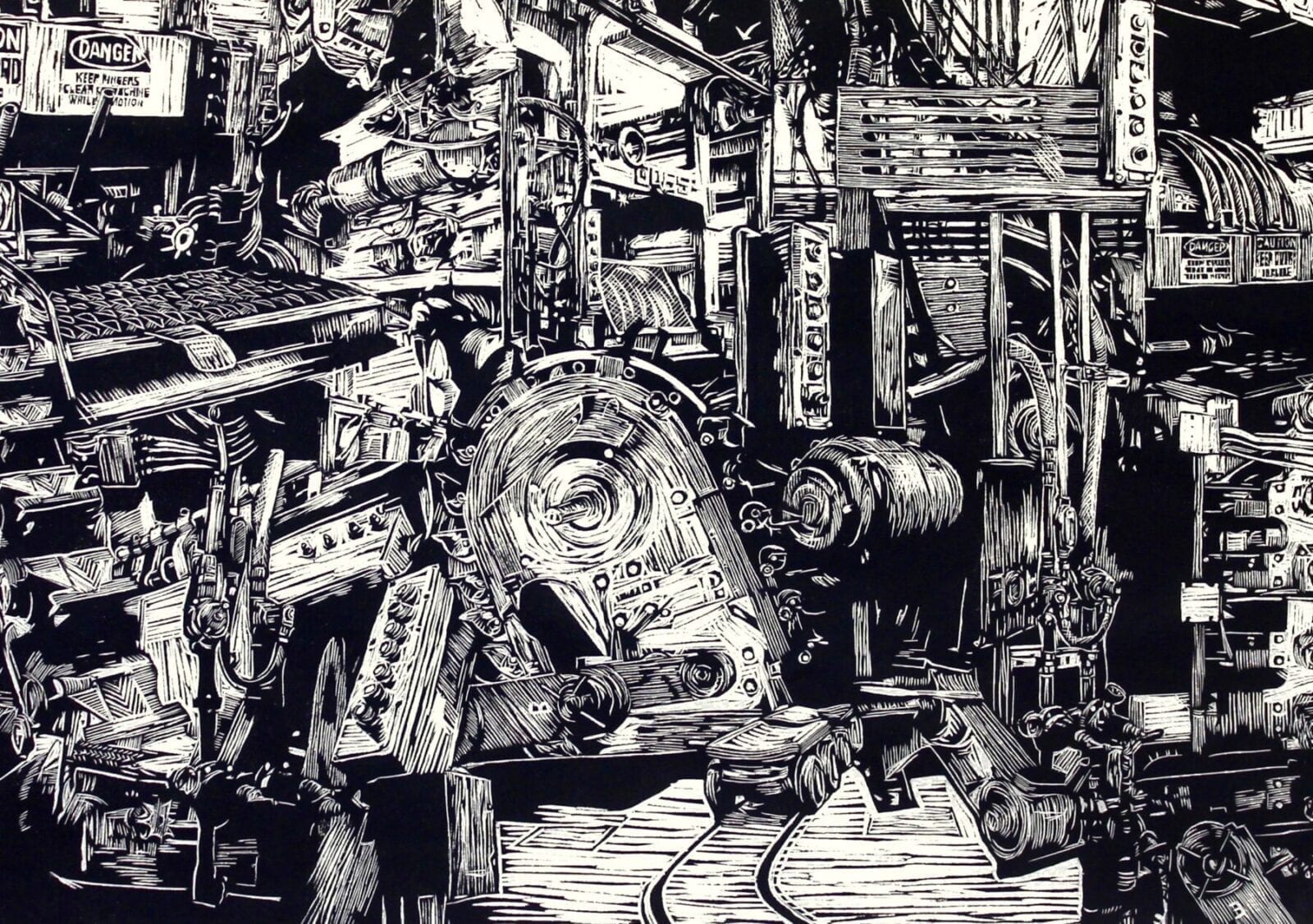 An unpaid advisor on the International Free Expression Project, Flanagan also has some concerns.

“It remains to be seen who is going to buy it from the Blocks,” Flanagan said. “Ultimately, the question about whether or not the project happens depends on who takes the building. The new owner will determine the viability of the whole project.”

A subsidiary of Block Communications, Press Acquisition Corporation, purchased the property from the Pittsburgh’s Press’s parent company for $7.3 million in 1992.

The prospect of the Blocks handing the building over to the International Free Expression Project is nil; Victor said he’ll have to hold off on pursuing any work on the project’s physical space until a new owner is found.

Finding that owner is proving more difficult than Victor would like.

While the Business Times reported in May that a new buyer, Johnstown-based Zamias Services, planned to bid on the property, sources told Postindustrial that the offer fell through and that a subsequent offer also fell through. The PG building has now been vacant for more than four years.

“We are in discussion with interested buyers and hope to be very short-term owners of 34 Boulevard of the Allies,” said Diana Block, executive vice president of Block Communications, through a spokesperson.

When a new owner is found, there’s no guarantee that they’ll support Victor’s vision for the International Free Expression Project. One pressing concern is the expense. Victor said he’s talked to at least one architect who said the initial marketplace development he envisioned would cost as much as $12 million, which wouldn’t include “the cost of outfitting it with displays, a rebuilt press, movable walls, stalls, and the like,” Victor said, adding that “maintenance costs would be substantial” and that other costs would include “moving installations, floor sections and other things in and out of the building … as well as commissioning artworks, events and such.”

None of that includes whatever remediation that a new owner might have to take on. Edward A. Shriver, a principal at the architectural and urban design firm Strada, said that the building operated as a foundry and railroad engine repair business prior to its most recent role as a printing press. That history has placed an environmental toll onto its structure, he said, estimating that remediation efforts would cost at least $1 million and could go as high as several million dollars.

“The problem isn’t so much chemistry” related to the printing presses, he said, “as it’s just that the building has been worked over so many times over nearly a century.”

Bear, who was also an editor at the PG, dreamed up an idea in 2007 for High Point Pittsburgh — a park atop Pittsburgh’s highest skyscraper, the U.S. Steel Tower, similar to the Empire State Building’s Observation Deck, that would give Pittsburghers a 360-degree view of the region.

In 2010, Carnegie Mellon University’s STUDIO for Creative Inquiry began funding the High Point Pittsburgh Investigation, allowing Bear to use CMU resources and students to construct an incredibly detailed and convincing interactive model for the park that he could take to executives overseeing the holding company that owns the U.S. Steel Tower. Despite support from Carnegie Mellon University, Pittsburgh’s mayor, and a host of other local luminaries and organizations, High Point Pittsburgh went nowhere.

“As long as we have a chance — a good one, I think — to turn a unique, historic, block-long newspaper press room with awesome ambiance at the front door of a major U.S. city into a marketplace of ideas and celebration of free expression, why wouldn’t we go for it?” 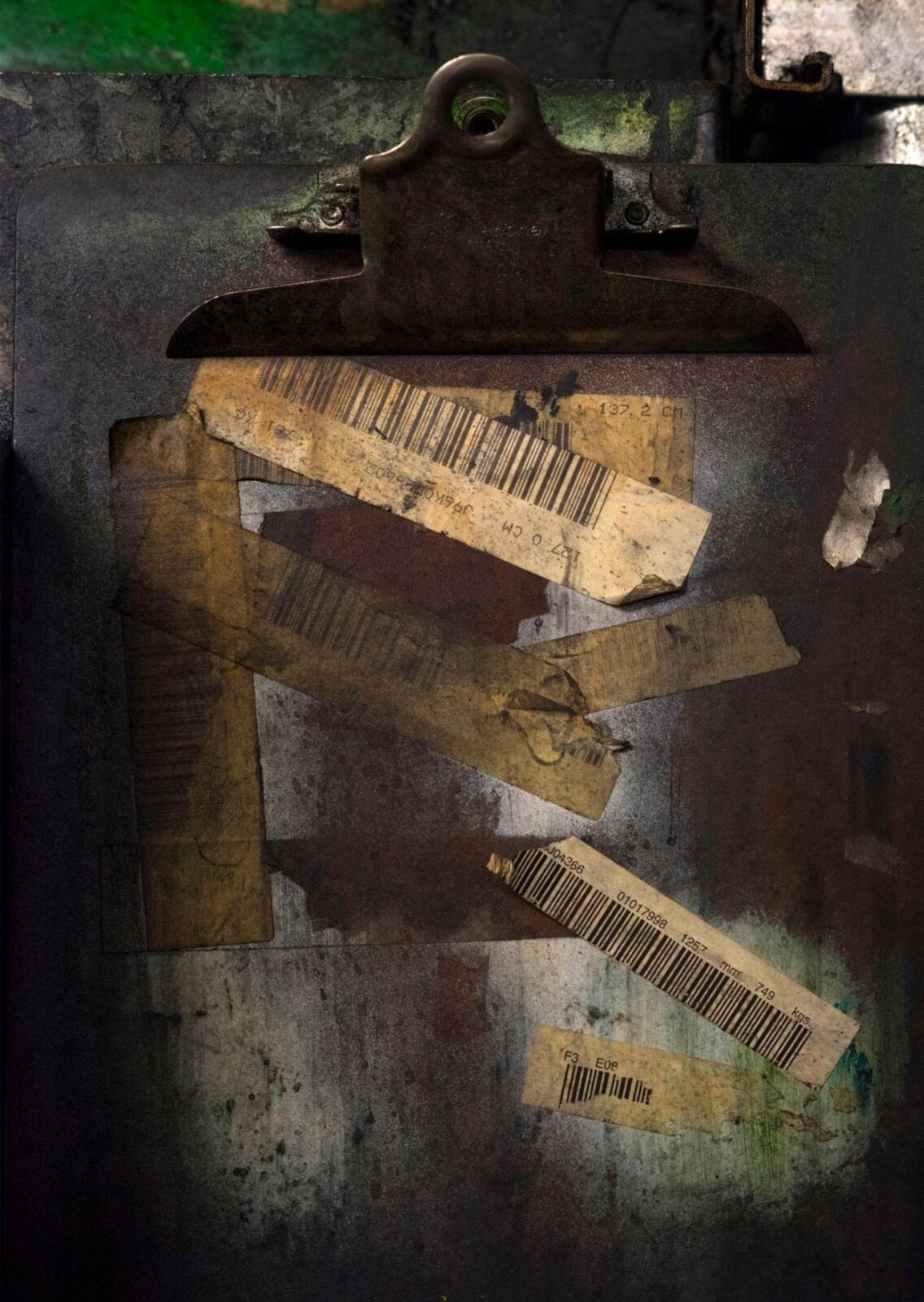 According to Bear, it came down to the property owners who simply didn’t want the additional elevator traffic in an already heavily trafficked corporate hub.

“If I couldn’t get permission from the owners [of the U.S. Steel Building] — which, I’ll remind you, I did not — my idea simply would not work,” Bear went on. “With the Free Expression Project, it doesn’t need to be in this one building. It can exist anywhere.”

Indeed, the City of Pittsburgh is already home to one organization similar to the International Free Expression Project, City of Asylum, which gives sanctuary to exiled writers who have been threatened because of the content of their work.

And there is evident support for the International Free Expression Project. Despite having no real base of operations — and not much more than a plan of action — the International Free Expression Project has raised about $170,000 so far, according to Victor, which it has used to purchase, move, and store 90 tons of presses, press parts, and historic artifacts; to sponsor events; to mount popup exhibits and a pressroom art installation; and to commission artworks and license them for display in marketing materials and exhibitions.

In addition to the funding, it’s supported by a who’s-who list of advocates and advisors, which include actor Michael Keaton, Nobel laureate Svetlana Alexievich, Washington Post editor Marty Baron, and historian David McCullough.

Pittsburgh Mayor Bill Peduto has expressed his support of the project, as has the Allegheny Conference for Community Development, Carnegie Museum of Art, Andy Warhol Museum, the Pittsburgh Office of Public Art, and The Pittsburgh Foundation. In addition to lending their names to the project, board members help to promote the project:

Michael Keaton, for example, cut a video in support of the project’s “War on Truth” free press forum; and Jillian York, director of International Freedom of Expression at the Electronic Frontier Foundation, has provided advice and made connections for the group outside Pittsburgh.

“As long as we have a chance — a good one, I think — to turn a unique, historic, block-long newspaper press room with awesome ambiance at the front door of a major U.S. city into a marketplace of ideas and celebration of free expression, why wouldn’t we go for it?” he said.

Then he relented a bit.

“Of course,” he went on, “we could do it somewhere else if we have to.” 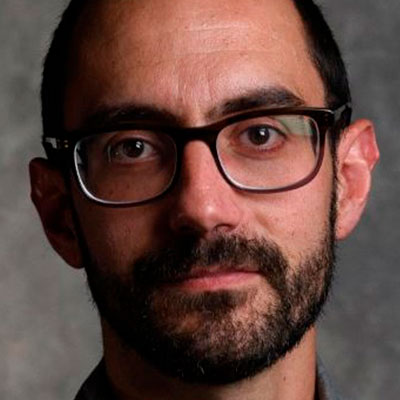