Stephen Williams sees Huntington, W.Va. as the next Asheville, N.C. — drawing a creative class who sees the city as a destination and not a place to move away from.

As mayor, Williams is working with leaders in seven other cities on a plan they hope can do for the region what the Marshall Plan did following World War II. The Marshall Plan for Middle America is a sweeping call-to-action to replace jobs based on fossil fuels with “clean” energy.

“Particularly through this area, we are entrepreneurial people. We are problem solvers. We are applied engineers. We find ways to repurpose things,” said Williams, who grew up in the Huntington area. “So what I see is that we need to begin looking at ourselves as a solution provider and if we are providing solutions, then all of a sudden we become transformational.”

Williams hopes to see more partnerships, for example, to help “reuse” the infrastructure such as abandoned coal mines.

“So what I see is that we need to begin looking at ourselves as a solution provider and if we are providing solutions, then all of a sudden we become transformational.”

Of course, it’s not just Huntington. Mayors and representatives from Pittsburgh, Dayton, Columbus, Cincinnati and Youngstown in Ohio, Morgantown, W.Va. and Louisville, Ky. meet regularly to bring the ideas in the Marshall Plan to the Rust Belt & Appalachia.

A steady decline in traditional manufacturing jobs led to lower average wages, and population decline. West Virginia, for example, had the largest percentage of its population drop of any state in the nation from 2010-2020.

To foster growth, the report likens what’s needed to the sweeping European “Marshall Plan” of the 1940s. The plan was a $13 billion ( $142.8 billion in 2020 dollars) strategy to use American labor and capital to rebuild Europe and rebuild economic and democratic institutions.

A companion goal was to discourage communism in those countries.

Like post-war Europe, Middle America faces similar issues of decline and the need and desire to rebuild. 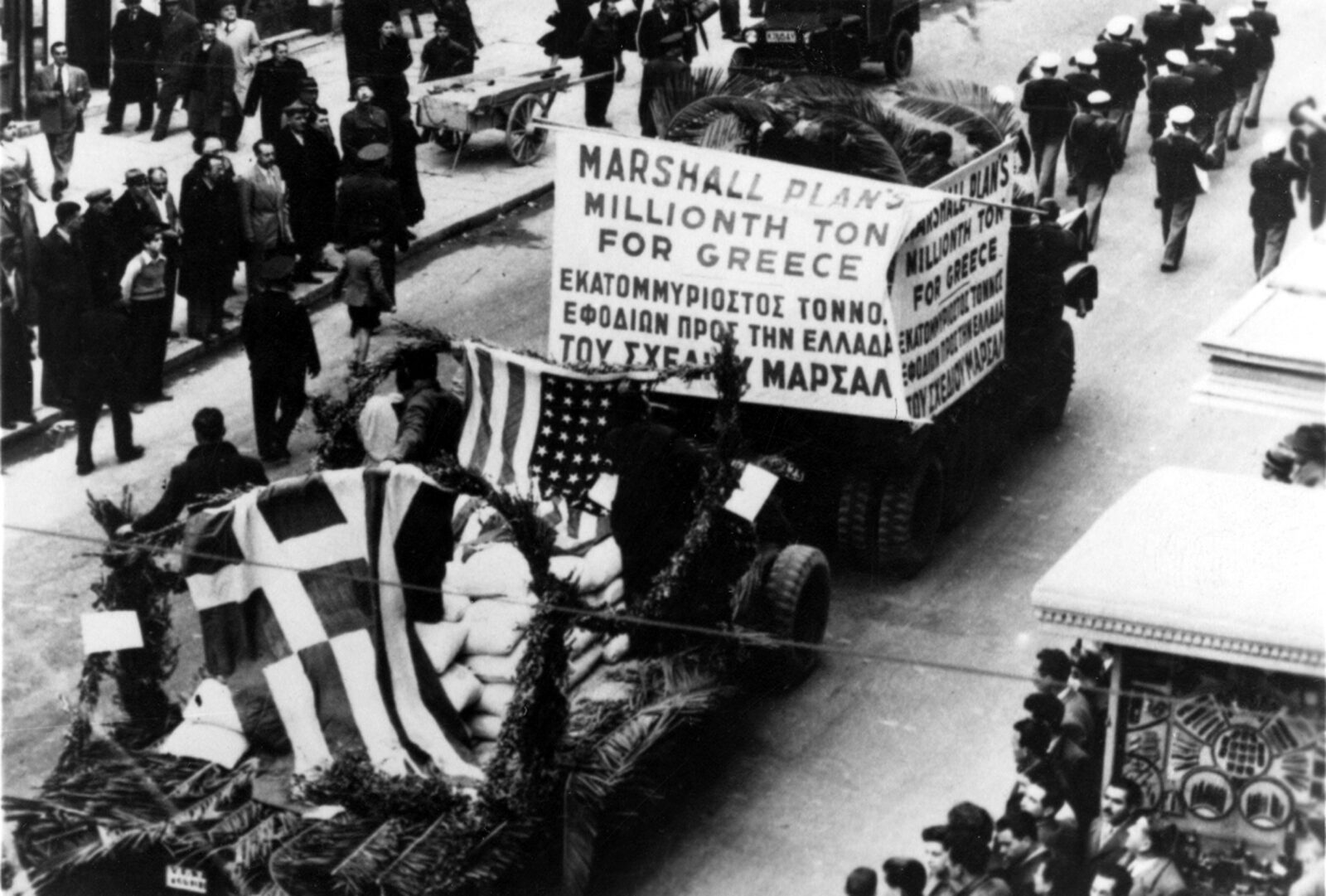 A parade honoring the Marshall Plan's millionth ton of food for Greece in 1947. The Marshall Plan tried to help the Greek economy participate in international trade and created the foundation for a post-war economy there. Similarly, leaders in several Postindustrial states hope a new Marshall Plan can revitalize areas that relied on heavy manufacturing and fossil fuel-based jobs. | Shutterstock

The plan itself assumes a mix of federal funding and partnerships, regional collaboration among elected officials, and buy-in from the private sector.

Members working on the plan have connected with leaders internationally, in Glasgow, Scotland, and Alberta, Canada, for example, which face similar challenges.

“We’ve continued to work with the cities to help build strategies and target investment actions that can help us target the energy transition,” said Grant Ervin, chief resilience officer for the City of Pittsburgh. “That’s been a large focus of our work.”

The group now is also working to drive federal funding for infrastructure such as roads and bridges.

“The upper Ohio Valley is well-positioned to be the epicenter for next-generation transportation renewables and hydrogen power, and what that does is to help lay the runway for these industries of the future that are going to take shape very quickly,” Ervin said.

“We need to take advantage of this moment to come from a position of strength, rather than wallow in the legacy of the past.”

But to get there, cities that boomed in the 1950s and ’60s need major updates. And that includes more reliable, high-quality internet access.

“(Some) next steps are rebuilding our cities structurally for a newer time,” Ervin said. “It’s making sure that that infrastructure can endure and last, and that it is sustainable from that aspect and helping communities and populations in need.”

Dayton Mayor Nan Whaley says the initiative is especially timely, given that the pandemic has created more conversations about how to rebuild communities.

She is pressing for jobs related to “clean energy” to come to “fossil fuel communities.”

“We are effectively trying to shape these resources to meet at the moment both the economic future and community and health of the region,” said Whaley, a two-term mayor now running for Ohio governor. “We need to take advantage of this moment to come from a position of strength, rather than wallow in the legacy of the past.” 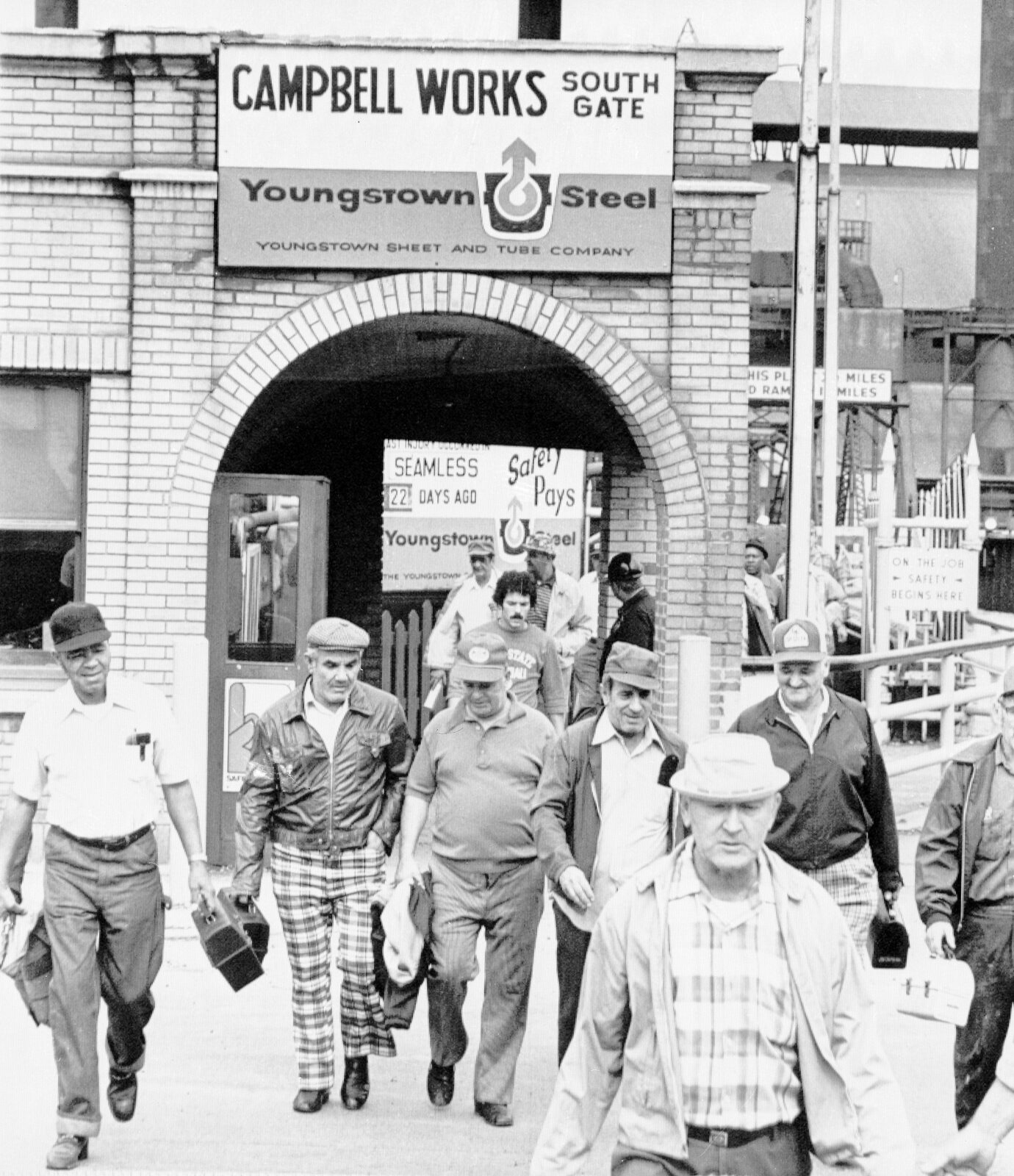 Youngstown, Ohio is among the cities mentioned in the Marshall Plan for Middle America, a sweeping call to modernize infrastructure and the economy following the boom years of heavy manufacturing, such as at Youngstown Sheet & Tube. Here, workers leave the plant after an 8-hour shift on Sept. 20, 1977. They were among the 5,000 left unemployed after most of the plant's production moved out of town. Because of that and other closures, Youngstown’s population has plummeted in recent years. (AP Photo/Youngstown Vindicator)

No one, she said, believes that one company is going to fuel a renaissance.

“But you have to have the base to build them and attract these companies, and right now we don’t have the tools to be competing,” she said.

“The big thing the Marshall Plan raises, I think, is that America has a choice. It can keep making the same mistakes over and over, or it can try to invest in a way that will be more sustainable and equitable,” Whaley said.

“We have built our nation and it’s been allowed to crumble, and as it’s crumbled, so have the hopes and dreams of people living in the Midwest and middle America,” Williams said. “What I have observed in more recent years is … people feel they have been ignored even when there are political movements that say we are paying attention to you. But they’re not.”

For example, there are brownfields and abandoned coal mines with no real path for reuse. But there’s plenty of open land for various uses, including solar installations.

“We can compete with anyone in the world.”

“We have an opportunity that we haven’t had in the last 20 years,” said Williams, a former investment banker. “I am bullish on this region. Buy and hold. This is a long play. What we have proven over time is that you buy it and hold it, is that there’s an opportunity not just for America, but our market is a worldwide market.”

In Huntington, Williams hopes to show people that there are jobs and a good quality of life.

“We have a lot of work to do to make sure our cities are pristine and innovative,” he said.

“What I am simply saying is we are a city of solutions.

“We can compete with anyone in the world.”

Kimberly Palmiero is CEO & Editor-in-Chief of Postindustrial Media. Reach her at kim@postindustrial.com.