Artist Harvey “Frzy” Daniels lives in Los Angeles but returns often to Pittsburgh’s East Liberty neighborhood, where he grew up.

He owns a house there, and it’s a place that still informs his writing. Jan. 11 is Frzy Day in Allegheny County, named for him in late 2018. He said he carries the honor with a certain gravity.

“I’m a voice of the people and especially being an African-American man, especially growing up in Pittsburgh. It puts me in a very interesting place because for instance, getting the day named after me was very important,” he said.

It’s a long way from his senior year in 2003, when he entered a national music contest sponsored by the Boys & Girls Clubs of America at the now-closed Career Connections Charter High School. He started rapping — and he hasn’t stopped since.

He started entering rap battles, and writing more. In 2016, he released “God, King, Slave,” a 24-song album. And earlier this year he unofficially broke the Guinness World Record with a 31-hour freestyle rap marathon.

You write all of your own lyrics. Can you talk about what informs your writing?

I think it’s my job and artists in general, but for me in particular, to document. The pencil is my paintbrush. The words are my paint. It’s my job to create a painting that will tell a story.

I want people to be able to go back to it and not only hear it, but see it, but then give them creative ways, and give them cool ways to think about it, especially from the perspective of a black man, but to also not be offensive or aggressive or or, or selfish and to not look at the self-glorify in a way, right? To understand that there are racists and there are bigots in every culture, and be like, we all need to do better.

And now this is what I’m here to do. I want to be an example.

Like the cover of “God, King, Slave.” People see it. They talk about the whips, the whip marks on my back immediately. That’s the first part of the conversation, but there’s a crown on my head. Those whip marks change with a crown. You remove the crown. I look like a slave. You put the crown on those with marks, become battles, have become a survivor. At that point, they look at me like, this is a king that fights. So as a king, I’m on a battlefield with my people fighting. But it’s interesting that if I lose that crown for a second, I look like a slave. And that’s what we have to change in this culture. 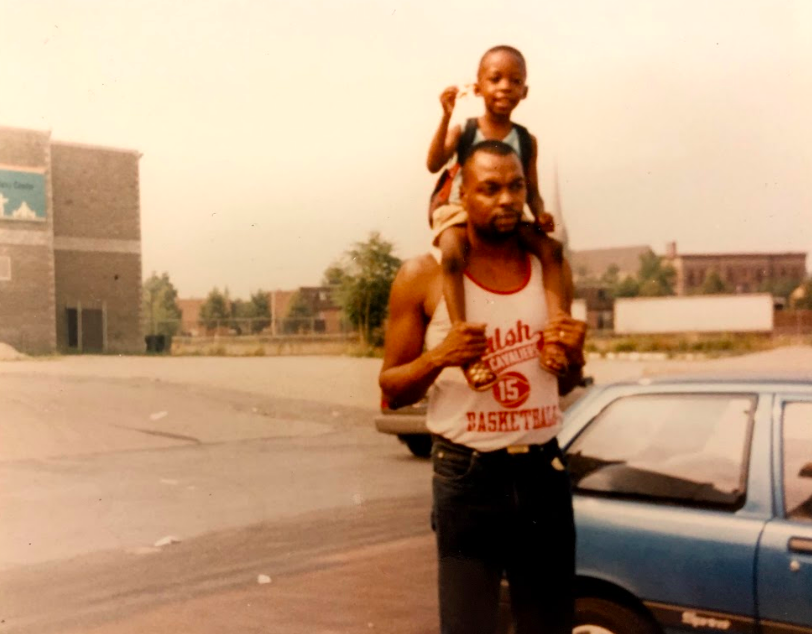 Frzy and his father, Harvey K. Daniels, walk through the old PharMor next to the Nabisco factory in Pittsburgh’s East Liberty neighborhood. They’d walk through there as a shortcut after the elder Daniels played basketball on Sundays at Connie Hawkins Court. There’s a McDonald’s and a plaza there today.

People talk about improving conditions and making communities more equitable by changing systems, but really start with people. You can change an institution, you can change rules, but it starts with people. How do you do that?

So many people, I think judge people based on the cover of the book, really. Now we’re getting to the point where people are judging people by the outside of the library.

I think that’s what’s happening in Pittsburgh that everyone’s lumped into a group of their comfort. So they’re all just talking, seeing people every day.

Your childhood neighborhood, like many, has become “gentrified,” and of course that leads to conversations about how we can change neighborhoods in a way that is equitable. What was it like for you there growing up?

It was culture. It was just a place where you knew everyone. You knew what spots had the best food and you knew everybody knew each other’s names. And, you knew on the first you had to go to David shoes to get your stuff. It was just culture and, and it felt like no matter what people said about it or, or the fear that came with the celebrity or the stereotype, we also had the Martin Luther King busway. So it was a hub in a way of different cultures and energies.

I still love it now. Every time I come back and forth from L.A., it looks different. And you know, it’s a whole different field. I played for Kingsley football. I used to run the practice. One of the things that people will never know is waking up, going to school and smelling like Nabisco cookies (Nabisco Pittsburgh operated from 1918 to 1998 in the area).

I’m always for change, I’m for evolution. I’m for putting any culture in a better situation to strive. But I’m weird about gentrification and things like that, but at the same time I am OK with forced growth.

But still we can’t lose what makes a place. You can’t lose the foundation of a place and that’s what’s happened.