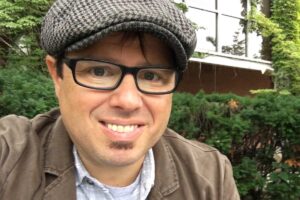 Michael John Garcés has been an ensemble member at Cornerstone since 2006, where he’s written plays including Magic Fruit, the “bridge” project of the multi-year Hunger Cycle which brought together the many communities of the cycle; Consequence, out of story circles with students, teachers, administrators and parents in South Kern County; Los Illegals, created in residence with communities of day laborers and domestic workers; and The Forked Path, a collaboration with Stut Theatre and the Van der Hoeven Kliniek in the Netherlands, which was performed at the Net Even Anders Festival in Utrecht and The International Community Arts Festival in Rotterdam. Directing credits at other theaters include Wrestling Jerusalem by Aaron Davidman (premiere at Intersection for the Arts; other productions include The Guthrie Theatre, Cleveland Public Theatre and Mosaic Theatre), The Arsonists by Max Frisch (Woolly Mammoth Theatre Company), District Merchants by Aaron Posner (The Folger Theatre), and Seven Spots on the Sun by Martín Zimmerman (The Theatre @ Boston Court). Michael is a recipient of the Rockwood Arts and Culture Fellowship, the Princess Grace Statue, the Alan Schneider Director Award, a TCG/New Generations Grant, the Non-Profit Excellence Award from the Center of Non-Profit Management, is a Southern California Leadership Network Fellow and a proud alumnus of New Dramatists. He serves as vice president of the executive board of SDC, the theatrical union for stage directors and choreographers.

Thanks for listening to Pittsburgh City Theatre’s CitySpeaks podcast.